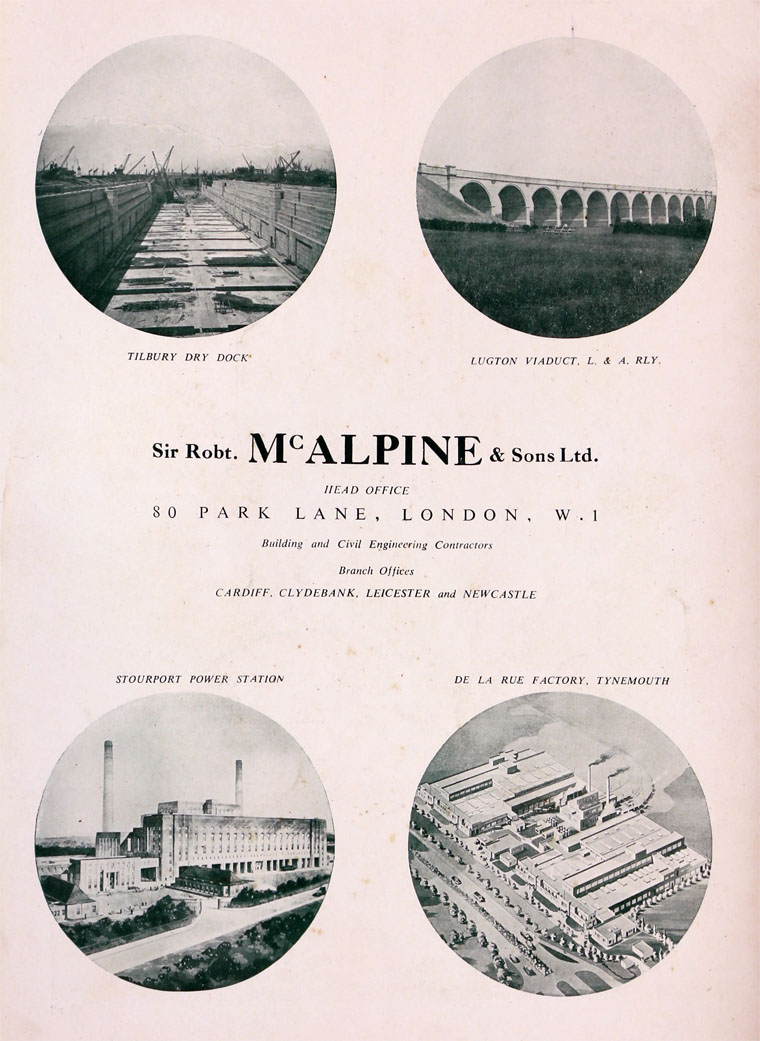 1872 McAlpine won his first major construction contract, to build 100 cottages for miners at Stonefield near Hamilton.

1875 He began to invest in property, building houses to let in Hamilton, Stonefield, and Motherwell.

By 1877 The firm regularly employed over one hundred men

Leased three brickworks and experimented with the use of concrete to make lintels and doorsteps.

By 1876 The firm was building walls of houses of rubble concrete blocks.

1880 The house-building ventures collapsed. Robert took his cashier, William Richmond, into partnership in his contracting business which avoided the business falling into the hands of his creditors. Robert continued nominally as an employee of the firm until he was discharged from bankruptcy in 1881.

1882 Built the largest factory in Europe, for the Singer Manufacturing Co at Kilbowie, Dunbartonshire.

1883 Dissolved the partnership with William Richmond.

1884 Won the contract to build the Barrhead to Ardrossan section of the Lanarkshire and Ayrshire Railway. McAlpine brought his eldest sons, Robert junior (1868–1934) and William (1871–1950), into the business, which became known as Robert McAlpine and Sons.

Between 1884 and 1904, Robert McAlpine and Sons built nearly 150 miles of railway in Scotland and Ireland, pioneering the mass use of concrete in railway construction, most famously on the 40 mile Mallaig extension of the West Highland Railway, including the Glenfinnan Viaduct, and the Borrodale Viaduct - the longest concrete bridge span built.

1900 McAlpines won its first contract in England, for the construction of a graving dock at Hebburn-on-Tyne.

1905 Malcolm McAlpine set up the Victoria Agency in London in order to win contracts in England.

By 1914 McAlpines had worked on a number of reservoir and railway contracts in England.

1918 Robert was created a baronet.

1920s McAlpines built many new council house estates, including in London and Manchester, as well contracts for major roads, and Takoradi harbour on the Gold Coast.

1922 The company's reputation as a pioneer of concrete construction led to contracts for the construction of Wembley stadium and the buildings of the British Empire Exhibition.

Other notable buildings were the Black Cat factory in Camden and the Firestone Tyre and Rubber Co's factory at Brentford.

1929 the firm began work on the Dorchester Hotel in London, financed by a syndicate of which McAlpines were a member

1920s/30s McAlpines created a number of limited companies to complete for large contracts including Sir Robert McAlpine (London) Ltd which carried out major dock construction in London during the late 1920s.

1934 the other partners agreed that McAlpine (Midland) should be run by Sir Alfred McAlpine alone, as his own business.

1937 Bought out the sole remaining partner in the Dorchester which was run by the McAlpine family until 1976.

1940 Sir Alfred and his son Jimmie formed a new company, Sir Alfred McAlpine and Son, to acquire the business of McAlpine (Midland).

1960-2 Built Shell Centre in London and Spencer steelworks at Llanwern.

1972 Public offer of limited number of shares in Newarthill Ltd, formed that year to acquire the company[4]. The family remained the principal shareholder.