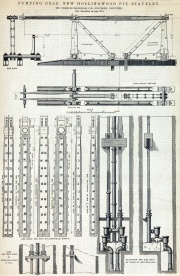 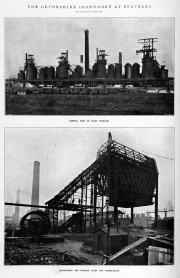 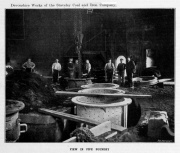 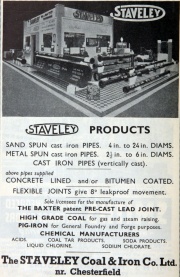 1600s Quarrying for iron ore took place on the Duke of Devonshire's land at Staveley, from the 17th century, and an iron foundry and furnace was established there.

1786 Three blast furnaces were lit, owned by Ward and Lowe.

1850 These furnaces were acquired by the Charles Barrow

1863 Company registered. The Staveley Coal and Iron Co became a public limited company in 1863-1864, at a time when the ironworks was producing 20,000 tons of iron castings per year. Charles Markham (1823-1888) was appointed as managing director and chief engineer in 1863, overseeing a massive expansion in the company, particularly in iron pipe production and coal mining. The company was registered on 29 December. [1]

1888 On the death of Charles Markham, George Bond was appointed general manager.

From the coke-oven gases sulphate of ammonia, tar, and benzole were recovered; benzole was refined into high-grade tar products.

The Devonshire Chemical Works were constructed on an extensive scale to utilise on the spot the "waste" products — that is to say, the gas of the coke ovens.

1912 A plant for distilling tar was erected, from which are now obtained naphtha, creosote oil, refined naphthalene, anthracene, tar acids, and pitch.

1913 the manufacture of sulphuric acid was begun.

WWI plant was erected for the manufacture of nitric acid, nitro benzole, and aniline oil.

1925 The Staveley Coal and Iron Company, gave notice that owing to bad trade its Dowell Colliery will be closed for an indefinite period.[3]

By this time the property had developed into a large and very prosperous concern, having four modern and five old open-top blast furnaces. The boilers were fired by blast-furnace gas.

c.1926 Took on the business of Markham and Co

1926 - January. Developments are also announced at the collieries and works of the Staveley Coal and Iron Co, Ltd., Mr. G. N. Turner the general manager speaking to the Barlbro Colliery officials on Saturday, said that the sinking at the " Do-Well " colliery had not been as successful as was anticipated, but the directors hoped to open the pit again if trade improved. They had also sunk a shaft at the Pebley pit of the Barlbro Colliery down to the deep soft coal, which would enable the men to get to their work more quickly. The company installed a huge gas engine at its Devonshire Works, Staveley, which was the largest at the time, of its kind in the world.[4]

1946 The coal industry was nationalised.

1948 Staveley Iron and Chemical Co was formed as a private company.

1953 The directors, bruised by the negotiations for compensation of their nationalised coal properties, decided not to bid for Staveley Iron and Chemical Co when it was to be sold by the Holding and Realization Agency. Subsidiary companies included:

1954 Valuations had been completed for compensation in respect of the nationalisation of Arkwright Coal Co, Doncaster Amalgamated Collieries and Newstead Colliery Co. Subsidiary companies included:

and machine tool companies in Canada.