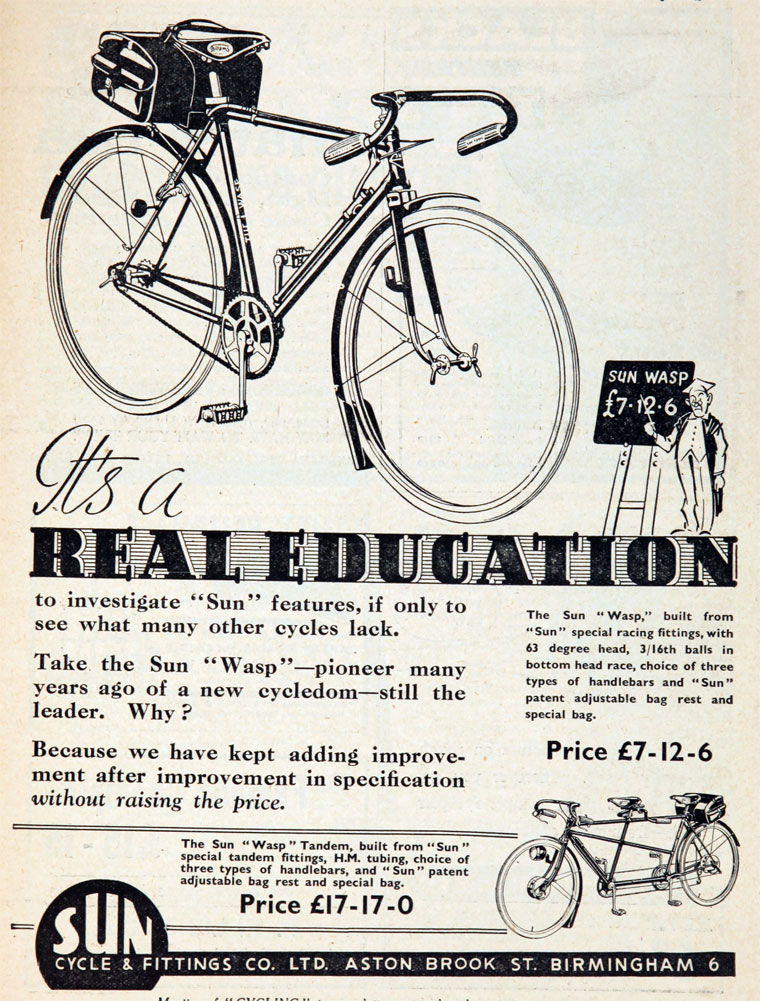 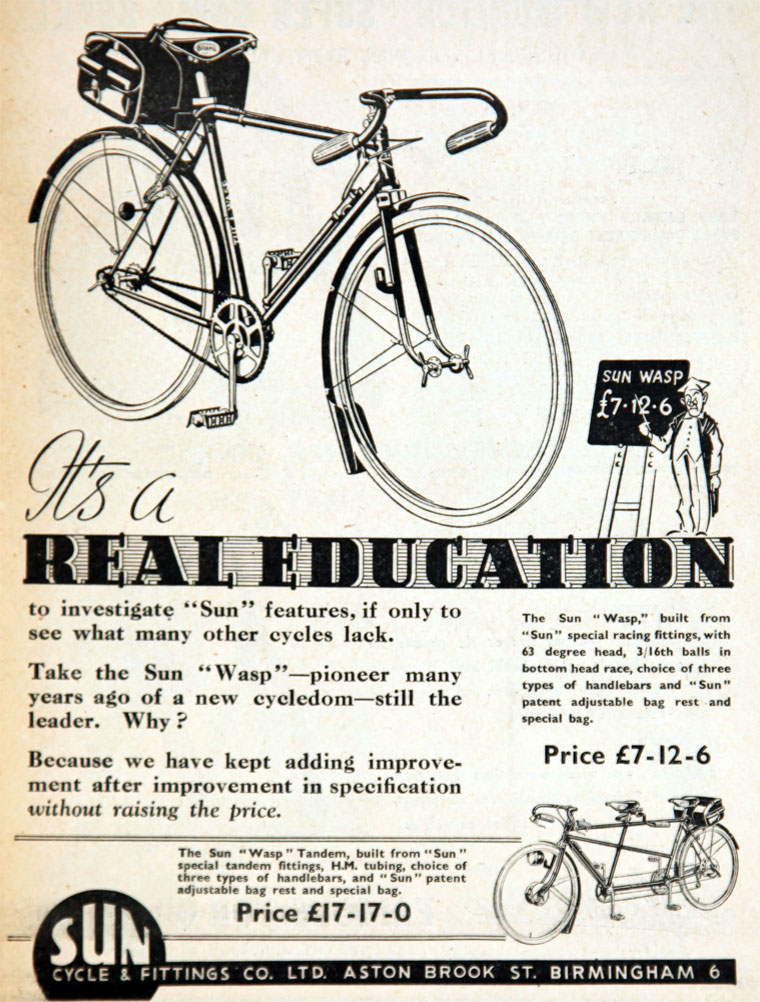 Founded in Victorian times, the brand has its origins in James Parkes and Son, a brass foundry making, amongst other things, incandescent lamps - hence the eventual Sun brand name. The company was run by the Parkes family and the Sun name first appeared in 1885.

1897 Joseph Parkes, the son of James Parkes, changed the name of the company to The Sun Cycle and Fittings Company, and the company was also incorporated as a limited company. 'Sun Cycle Fittings Co. This company has been registered with a capital of £15,000 in £1. Shares to acquire the business of a manufacturer of cycle fittings and accessories now carried by Joseph Parkes (formerly in partnership with James Parkes, now deceased), at Phoenix Works, Aston Brook Street, Birmingham, under the style or firm of the Sun Cycle Fittings Company, and to carry on the business of cycle and fittings manufacturers, cycle and motor manufacturers and dealers, engineers and Machinists. The subscribers are: Joseph Parkes, Sutton Coldfield, cycle manufacturer; Thomas Parkes, 101 Bevington Road, Aston, manufacturer; Frederick Parkes, 113 Bevington Road, Aston, cycle manufacturer; William Parkes, 140 Leonard Road, Handsworth, cycle manufacturer; Mrs. Maria Parkes, Wylde Green; Miss Harriet Parkes. Wylde Green; and Arthur D. Brooks, 128 Colmore Row, Birmingham, solicitor.'[1]

1911 The first of their motorcycles, the Sun Precision, was produced late that year. It had a 3.5hp Precision engine, Amac or B and B carburettor, Bosch magneto, Sturmey-Archer gearing and Druid forks.

1913 Two more versions were added, plus one with a 3.5hp JAP engine, but that one was soon dropped. Later that year came the first Sun-Villiers model, but that was soon replaced by a 269cc two-stroke Villiers. They then added V-twins with either Precision or JAP engines.

1915 The company now used the Sun-Vitesse name for a two-stroke, 269cc model fitted with their own engine.

Post WWI. The company developed their engine further and added a disc valve to control induction.

1921 In entering the 250cc TT, the firm reduced the size of their engine slightly, but without much success.

1922 Their road model was joined by one fitted with a JAP engine.

1923-1924 Further models were introduced with Villiers and Blackburne engines.

1925 The company started to use double names, such as Sun-Blackburne and Sun-JAP. This trend lasted until the end of the decade.

1930s Although Villiers and JAP engines were still in use, the marques returned to the Sun name only.

1933 The production of motorcycles ceased for some years.

1935 Public company formed to take over a company of the same name[2]; public issue of shares[3].

1940 The Sun name appeared once more, this time on three versions of an autocycle, with a 98cc Villiers engine.

1951 The autocycle had gone, but two new models appeared, both with Villiers engines.

1953 A competition model was added to the range.

1957 Attention shifted to production at each end of the scale. At the top end was the 249cc Villiers 2T twin engined Overlander. At the other end came the Geni scooter - this had 15-inch wheels and a 99cc engine.

1958 Take-over bid by Franco British and General Trust[4] followed quickly by bid from Tube Investments which was recommended by the directors and was eventually successful[5]. Became a part of the British Cycle Corporation.

1959 The company's first true scooter was produced. Called the Sunwasp, it had a 174cc Villiers engine. It was also the year that production stopped and the firm was taken over.

1960 Of the two scooters, the smaller went out of production that year.

1961 Production of the larger scooter stopped and that brought the marque to a close. Transferred within Tube Investments to the cycle business which was managed by Raleigh which continued the bicycle manufacturing side.