1867. Monitor for the Indian Government. 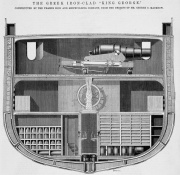 1893. Paddle Steamer for the Bosphorus. 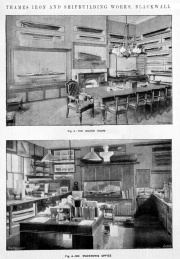 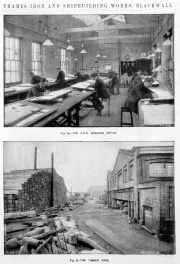 1895. The drawing office and timber yard.

1895. View from one of the engineering towers. 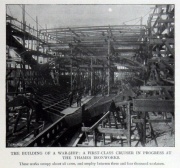 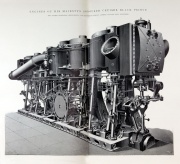 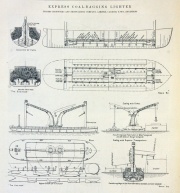 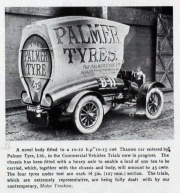 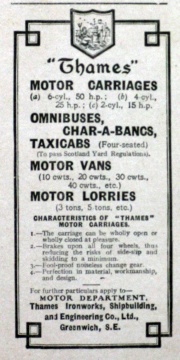 Thames Ironworks of Blackwall was an established shipbuilder in the southeast of London.

1846 Ditchburn retired; Mare extended the works to the west side of Bow Creek, as C. J. Mare and Co

1857 C. J. Mare and Co became insolvent and was taken over by Mare's father-in-law, Peter Rolt, and renamed Thames Ironworks Co. Ltd. The yard occupied sites on both banks of the River Lea at the point where it joined the Thames, with 30 acres in West Ham and 5 acres in Blackwall.

1860 The SS Mooltan was built for Peninsular and Oriental Steam Navigation Co by Thames Ironworks and Shipbuilding Co with engines by Humphrys, Tennant and Co[1]. The yard built the first ironclad battleship HMS Warrior, one of the first to use the longitudinal system of construction.

1861 Built the steam vessels Yavari and Yapura for service on Lake Titicaca, Peru, with machinery by James Watt and Co. The extensively-modified and restored Yavari survives today. See here.

1872 Peter Rolt and Frank Clarke Hills, contributories of the Thames Iron Works and Ship Building Co, applied for the company to be wound up[4]

1872 the firm became a limited liability company. It was one of the largest and most productive shipyards on the Thames.

By the 1880s all the Thames shipyards were facing increasing competition from the shipyards on the Clyde and in north-east England.

1886 Manufactured Hone's excavator and elevator for the patentee[6]; presumably this was the beginning of the cranes business - see: Thames Ironworks and Shipbuilding Co: Cranes

1892 The electrical engineer Charles Edward Grove joined the company and around this time the Electrical Department was started.

1894 Thames Ironworks and Shipbuilding Co decided to construct an experimental monorail line based on Behr's scheme, for which the electrical equipment might be supplied by Siemens[7]

1898 Disaster at the launch of the HMS Albion when 34 persons were killed. A. F. Hills was the chairman of the company [8]

1899 The Thames Iron Works, Shipbuilding and Engineering Co was registered on 15 July, to take over the business of the Thames Iron Works and Ship Building Co, with which was amalgamated the undertaking of John Penn and Sons. [9]. The company's civil engineering and electrical departments were full of work, 4 battleships were under construction and many smaller vessels as well as manufacturing and maintenance of the lifeboats for the Royal National Lifeboat Institution.[10]

1900s The company went on to build a number of coasters, tugs, riverboats and lighters as well as naval vessels.

1903 "Completed a twin-screw tug for the Portuguese Government of 39 tons, fitted with engines of 150 indicated horse-power; and have in hand a single· screw steamer for the War-office of 170 tons, and about fifteen lifeboats for the Royal National Lifeboat Institution."[11]

1907 On the death of George Mackrow, his son Clement became the manager of the shipbuilding department and naval architect to the company[12]

1909 The yard's failure to win orders for large vessels for the Royal Navy was the subject of comment in the press; it was the last major shipbuilding yard left on the Thames[13]

1910 Built an engine for use in aeroplanes (see photo)

1912 The business closed. The Silvertown site was maintained by the London and North Eastern Railway until 1927 when it was leased to S. Instone and Co., Ltd., shipowners and colliery proprietors[14]

May have built a few railway locomotives.