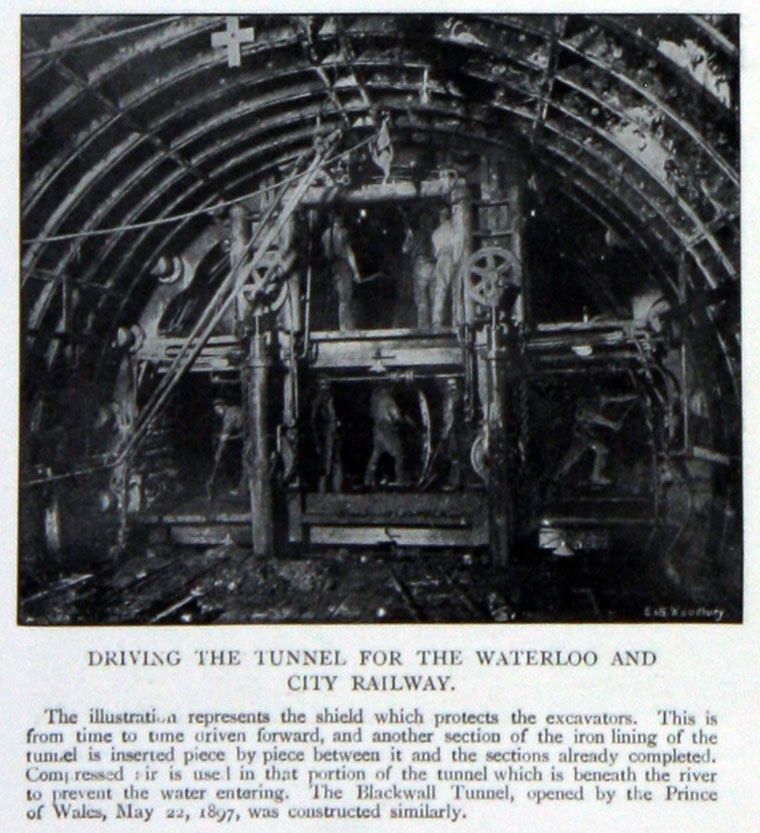 1898. Waterloo and City Shunting Locomotive No. 75S. Exhibit at the Shildon Locomotion Museum.

The Waterloo and City line is a short underground railway line in London, which formally opened on 11 July 1898. It has only two stations, Waterloo and Bank (formerly called "City", and within the City of London, hence the name). Between its stations, the line passes under the River Thames. [1]

It exists almost exclusively to serve commuters between Waterloo mainline station and the City of London, and does not operate late in the evening or on Sundays (in fact, during the line's history there has been only a single four-year period, between 1943 and 1947, when the line did operate on that day). By far the shortest line on the London Underground at only 1.5 miles, it takes only four minutes to travel from end to end. It was the second electric tube railway to open in London, after the City and South London Railway.

1848 The London and South Western Railway reached Waterloo station. The westerly situation of this terminus made passenger access to the City of London difficult. Proposals for an extension were considered but they were put into abeyance on grounds of cost. When the South Eastern Railway constructed its Charing Cross line, some through working was operated from the L&SWR line to Cannon Street, but this was commercially and operationally unsuccessful.

Nonetheless access continued to be a problem; eventually the solution was determined to be a tube railway, hugely cheaper than a surface line as it avoided nearly all of the land acquisitions that would have been required on the surface.

The line was designed by W. R. Galbraith and James Henry Greathead, inventor of the tunnelling shield that bears his name.

1908 This company was absorbed into the London and South Western Railway. [2]

1908 Did not participate in the common branding as "The Underground" adopted by the other underground lines.

1948 Became part of the Southern Region of British Railways on nationalisation.

Its ticketing was fully integrated with the national network and passengers could buy through tickets from mainline railway stations to Bank.

On privatisation of British Rail, it was seen to be anomalous for the line to be part of the National Rail network, and by agreement it was passed to the custody of London Underground.