Howe's ('Stephenson') link motion on 1847 stationary steam engine made by Burton-on-Trent Iron Works, on display at the Kelham Island Museum. 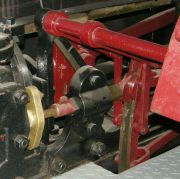 Detail of link motion on 1847 engine 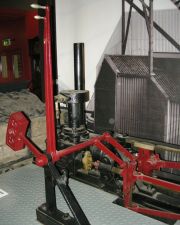 Detail of link motion on 1847 engine

Engineer for many years to Clay Cross Colliery Co.

Moved to the Ashford Works of the South Eastern Railway[1]

1864 Patent on improvements in steam engines, of the Clay Cross Co

1874 Engineer. Designed a 200hp winding engine with patented valve design for use at Morton Colliery.[3]

WILLIAM Howe was born at West Auckland, in the county of Durham, on 3rd March 1814.

He commenced work when about thirteen years of age, and worked at various collieries in the district as a general carpenter until ho was twenty-one years of age.

He was then employed for about nine months at the Shildon works of the Stockton and Darlington Railway, as a millwright and pattern-maker.

In 1835 he went into Lancashire, where he worked as a pattern-maker in Messrs. Jones's works at Newton, at the Vulcan Foundry near Warrington, and at Messrs. Mather and Dixon's works in Liverpool.

In 1840 he removed to Gateshead, and worked for a short time with Messrs. Hawks Crawshay and Co.; and in 1841 he went to work with Messrs. Robert Stephenson and Co., Newcastle-on-Tyne, as a pattern-maker.

In 1842, whilst in their employ, he perfected the valve-gear known as the link-motion, in the form in which it has been almost universally applied to locomotives. His original sketch and model are now in the South Kensington Museum. The full history of the invention is given in the introduction to Mr. N. P. Burgh's work on Link-Motion and Expansion Gear, and in Mr. D. K. Clark's work on Railway Machinery.

In 1846 he invented the three-cylinder locomotive engine, a patent for which was taken out in the joint names of Mr. George Stephenson and Mr. Howe.

In November 1846 he was appointed by Mr. George Stephenson to the post of engineer at the Clay Cross Collieries, and there he remained until his death. Whilst at Clay Cross Mr. Howe had abundant scope for the development of his mechanical ability, and rarely met with any difficulty which he did not speedily devise some means to overcome.

In 1847 he made the first application of the link-motion to a winding engine, using what he called the "twin-solid" form: in which the link was composed of two solid bars, sliding in curved slots on each side of a solid block fixed to the end of the valve-rod. An improved form of this was applied to a large winding-engine erected at Clay Cross in 1854, and has been at work ever since without repair or alteration.

In 1864, when designing new winding-engines for an extension of the collieries, he applied a modification of his own of Allan's straight-link motion, with much success. Besides these applications of the link-motion, he designed in 1849 or 1850 a self-acting brake for winding engines; and shortly afterwards the self-acting fence which is now so universally used at the top of colliery winding shafts.

About 1867 his health began to fail, but he continued in the discharge of his duties until within a fortnight of his death, which took place on 16th January 1879, in the sixty-fifth year of his age.

Mr. Howe's early education was very imperfect, but after coming to manhood he never ceased in his endeavours to improve it. During the time he was a workman he employed his leisure hours in acquiring mathematical knowledge, and in learning mechanical drawing, in which he soon became very proficient. He was a member of Council of the Chesterfield and North Derbyshire Institute of Engineers (which he largely assisted in promoting), from the time of its formation in April 1871 until his death. He became a Member of this Institution in 1860, and in 1862 gave some particulars of a large Cornish pumping engine, with wrought-iron beam, then in course of erection at Clay Cross. In the following year he contributed a valuable paper fully describing this engine (Proceedings, 1863, p. 248).

In 1870, in a discussion on Midland colliery working, he made some remarks on haulage by endless chain at Clay Cross. He also contributed a paper on an equilibrium slide-valve to the South Wales Institute of Engineers in 1865, and a paper on the Clay Cross blast furnaces to the Chesterfield Institute in October 1872. He was a zealous promoter of the Stephenson Memorial Hall at Chesterfield, and took an active interest in the local business of Clay Cross.

On 17th April 1872 he was presented with a purse containing upwards of £200, a handsome gold watch, and an address, "as an acknowledgement for practically developing the invention of the Link motion in August 1842."