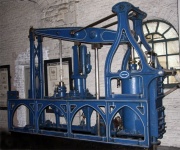 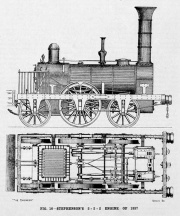 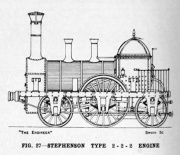 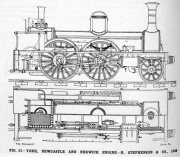 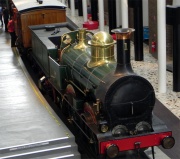 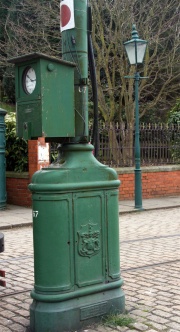 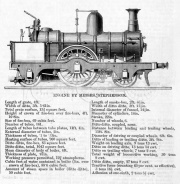 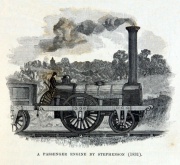 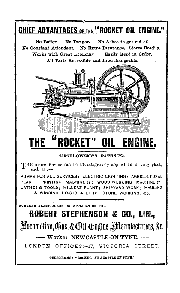 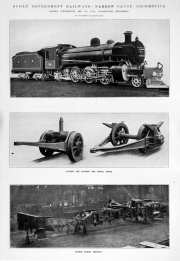 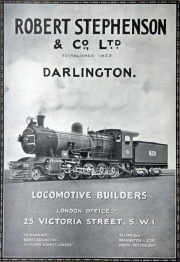 South Street, Newcastle. Original Stephenson offices on right. It would be interesting to know what the large beam on the LH building was originally used for

Robert Stephenson and Company was an engineering and locomotive manufacturing company founded in 1823. It was the first company set up specifically to build railway engines.

Parts of the original works have survived in the centre of Newcastle. See Historic England website[1]

1823 The company was set up in 1823 (some say 1821) in Forth Street, Newcastle-upon-Tyne by George Stephenson, his son Robert Stephenson, with Edward Pease ( who also held the shares of Thomas Richardson), and Michael Longridge. It was founded as part of their construction of the Stockton and Darlington Railway. The Works Manager was Timothy Hackworth.

Its first engine was Locomotion No. 1, which opened the line, followed by three more named Hope, Black Diamond and Diligence. The vertical cylinders meant that these locos rocked excessively and at the Hetton Colliery Railway Stephenson had introduced "steam springs" which had proved unsatisfactory. In 1828 he introduced the Experiment with inclined cylinders, which improved stability, and meant that it could be mounted on springs. Originally four wheeled, it was modified for six and another, Victory was built. Around this time, two locomotives were built for America. The first, a four coupled loco, was ordered by the Delaware and Hudson Railroad. The second, six-coupled and named Whistler was for the Boston and Providence Rail Road but was lost at sea.

In 1829 Stephenson's Rocket won the Rainhill Trials. This loco had two notable improvements - a multi-tube boiler and a separate firebox. Originally angled, the cylinders were later made horizontal.

1830 Eight locomotives were supplied for the opening of the Liverpool and Manchester Railway - Northumbrian, driven by George Stephenson himself, headed the line of trains; then followed the Phoenix, driven by Robert Stephenson; the North Star, by Robert Stephenson senior (brother of George); the Rocket, by Joseph Locke; the Dart, by Thomas L. Gooch; the Comet, by William Allcard; the Arrow, by Frederick Swanwick; and the Meteor, by Anthony Harding.

The Invicta was the twentieth, and was built for the Canterbury and Whitstable Railway. Its cylinders were inclined, but moved to the front (chimney) end. In 1830 came the Planet class with the cylinders inside the frames, followed by the Patentee which added a pair of trailing wheels for greater stability with a larger boiler. This 2-2-2 design became the pattern for most locos, by many makers, for many years.

The increased mileage of many trains highlighted problems with the fireboxes and chimneys. With the co-operation of the North Midland Railway at their Derby works, he measured the temperature of the exhaust gases, and decided to lengthen the boilers on future engines. Initially these "long-boiler" engines were 2-2-2 designs, but in 1844, Stephenson moved the trailing wheel to the front in 4-2-0 formation, so that the cylinders could be mounted between the supporting wheels. It was one of these, the "Great A" along with another from the North Midland Railway, which was compared with Brunel's "Ixion" in the gauge trials in 1846. In 1846 he added a pair of trailing wheels - the first with eight wheels. Another important innovation in 1842 was the Stephenson link motion.

1859 Robert Stephenson died and at that time the works employed 1,500 persons in Newcastle.

1877 Supplied tandem compound rotative engine for Whitwick Colliery. One of the largest rotative pumps measuring 125 feet from the flywheel tip to the end of the pump bobs. Also five boilers.

1899 The company was registered on 10 July, to take over the business of engineers and shipbuilders of a company of the same name. [3]

Over the remainder of the century, the company prospered in the face of increasing competition, supplying railways at home and abroad.

By 1899 around 3,000 locomotives had been built and a new limited liability company was formed, Robert Stephenson and Company Limited and the works was moved to Darlington, the first locomotive leaving the shop in 1902.

1902 Fifty-four acres of land were purchased at Springfield, Darlington (see Thompson Street Works) and the new works were completed this year with all the machinery being moved from Newcastle. Part of the old works was taken over by R. and W. Hawthorn, Leslie and Co. Most railways in England were building their own rolling stock, so most of the output was for export, from 4-4-0's for the Oudh and Rohilkund Railway to 4-6-0 and 2-8-0 for the Bengal Nagpur Railway. These later were adopted as a standard for the Indian railways. The works built the first British 2-10-0 for the Argentine Great Western Railway in 1905.

1911 Transferred the shipbuilding activity at Hebburn-on-Tyne to Palmer's Shipbuilding and Iron Company.

WWI During World War I, the company devoted itself to munitions work.

1917 and 1920, a large batch of locomotives was ordered by the War Office for use on the continent. From then on, business was slack, for various reasons. Notable were thirty 2-6-0 mixed traffic locomotives for the GWR in 1921, a batch of thirty 0-6-0 tank engines for the LNER and five 2-8-0 for the Somerset and Dorset Joint Railway. In 1936 and 1937, only forty six were built, including eleven 4-6-0 of the "Sandringham" class for the LNER.

1937 The company merged with the locomotive interests of R. and W. Hawthorn, Leslie and Co to form Robert Stephenson and Hawthorns with the shipbuilding side continuing separately. Main line locomotives continued to be built at Darlington, while industrial engines were built at Hawthorne Leslie's works at Forth Bank, Newcastle.