1903. Winner of the Gordon Bennett Cup in Ireland. From Motors and Motor-driving. Published in 1906. 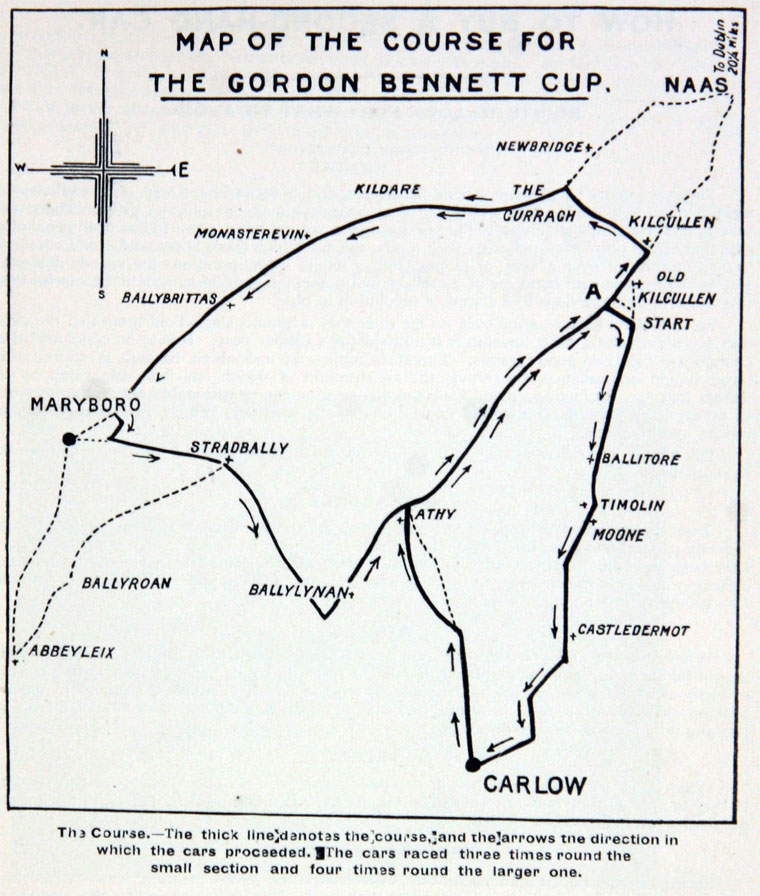 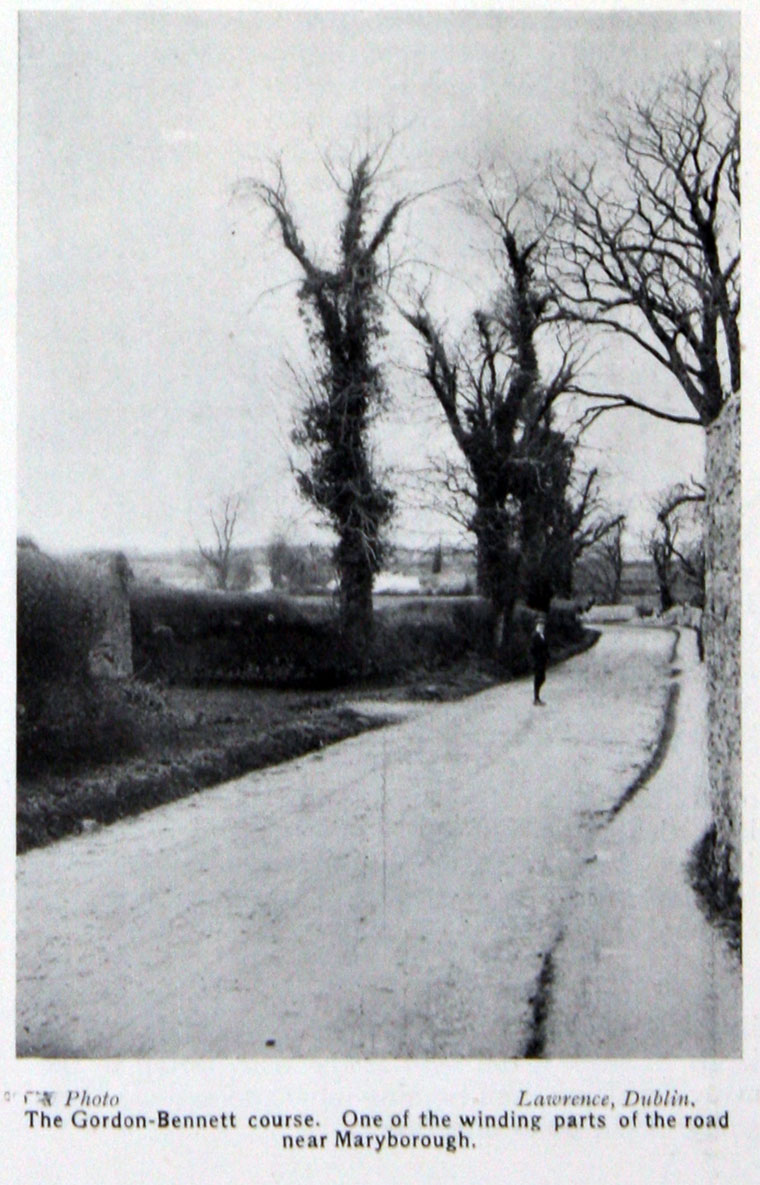 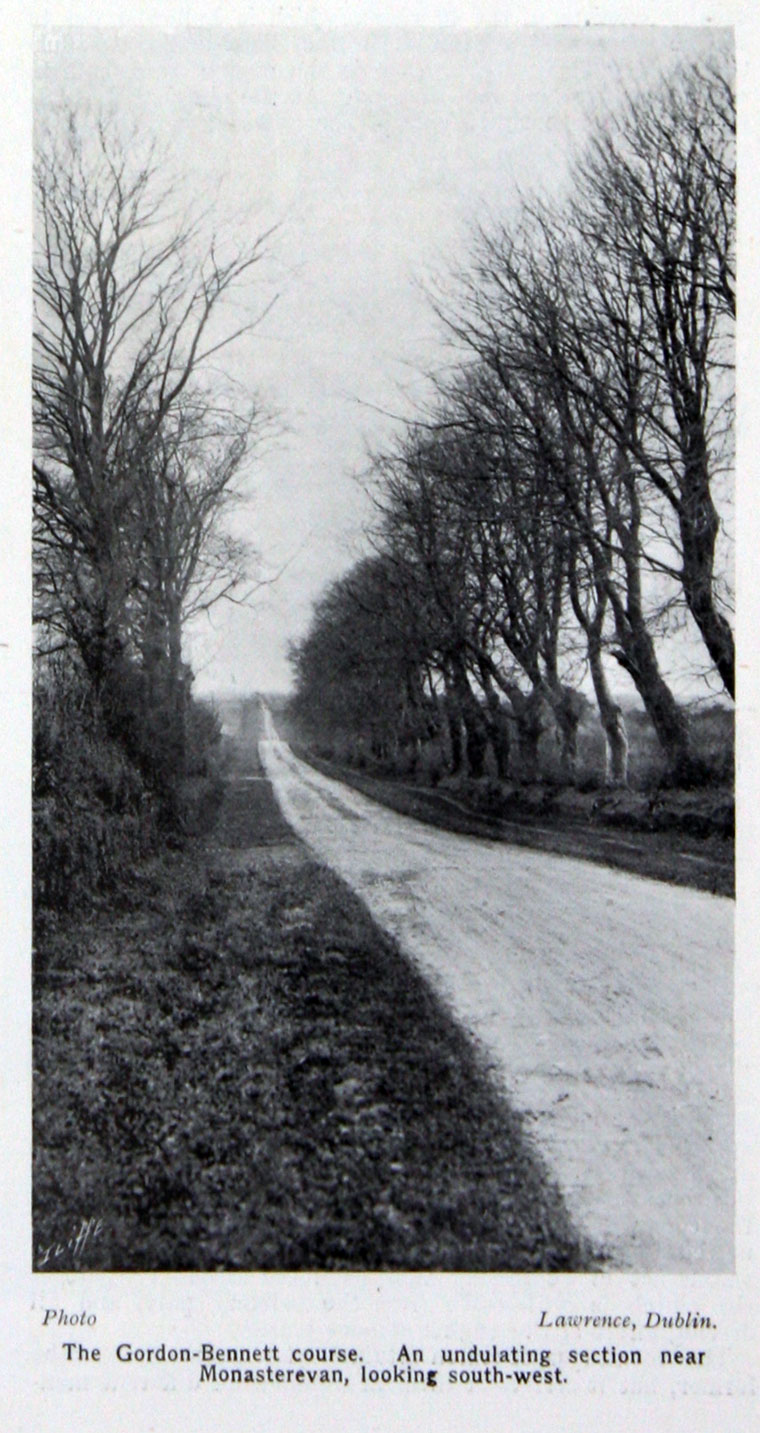 Note This is a sub-section of the Gordon Bennett Cup

Race for the Gordon Bennett Cup held at Athy, Ireland on the 2nd July 1903 with a distance of 327.5 miles

ACCORDING to the rules of the Gordon-Bennett Cup, the race must take place in the country of the club holding the trophy, or in France if a suitable course be not available.

As the Automobile Club of Great Britain and Ireland, represented by Selwyn Edge on a Napier car, won the Cup in 1902, it became necessary that the race for 1903 should be held either in the British Isles or in France. After considering many suggestions, it was decided to hold the race in Ireland, provided the necessary authorisation to do so could be obtained from Parliament.

The Club contemplated organising an automobile tour through Ireland after the race, and particulars of the proposed course and of the subsequent tour were sent to a large number of influential persons and to some six hundred newspapers. The draft proposals were also laid before lieutenants of the Irish Counties, the County Councils, Borough Councils, Urban District Councils, Town Commissioners, &c. The attention of hotel proprietors and of the various railway and steamship companies was drawn to the great advantages which would accrue to Irish trade if the Gordon-Bennett race could be held in that country. Numerous favourable replies were received to these communications and also promises of support.

Resolutions in favour of holding the race were passed by the County Councils throughout Ireland, and later a monster petition was signed by all classes and presented to Parliament in favour of a special Bill being passed to empower the Irish authorities to close the public roads over which it was proposed to run the race.

On February 24 the first reading of the Bill was moved by Mr. John Scott Montagu in the House of Commons, and with the exception of a trivial hitch it went through all stages very rapidly. In the House of Lords the Bill was entrusted to Lord Londonderry, and it was passed by the Upper House also without delay.

The route chosen for the race passed through the counties of Kildare, Queens, and Carlow. The complete circuit measured 103 miles, and roughly speaking, it ran in the shape of the figure 8. To provide for the public safety was a matter of grave consideration, the importance of which was brought vividly forward by the ghastly failure of the Paris-Madrid automobile race during May.

After conferring with the Committee of the Club the Local Government Board of Ireland issued a set of very complete regulations. In order that the public might be fully warned of the dangerous consequences of encroaching upon the road during the race, notices were posted in conspicuous positions all along the route and in the adjoining market towns. The local inhabitants were also circularised and requested to co-operate with the organisers of the event in guarding against accidents.

To ensure safety to the spectators as well as to the drivers over such a long course, a large force of police under the command of the inspector-general of the Royal Irish Constabulary, Colonel Sir Neville Chamberlain, K.C.B., were present, and some two thousand soldiers forming the camp at the Curragh were on duty under the command of Major-General Sir G. de C. Morton, K.C.I.E., C.V.O., C.B.

Many willing volunteers, members of the Club and others, gave their services as road stewards and performed invaluable services in the 'controls' and at various other points of the route. A large number of motor cyclists also rendered assistance as despatch-riders; they were divided into separate corps under captains, and were stationed at all important points. Their duties were often laborious, for in conveying their despatches they had to traverse bye-roads with which many of them were quite unacquainted.

Wire fences were erected across all roads converging upon the course (numbering about 270), in order that no stray cattle or horses could by any possible chance wander into the highway and so endanger the life of the competitors. Where possible, motor-cars belonging to members of the Club were also drawn up across the converging roads as an additional precaution.

The four competing Clubs were represented as follows:-

On the day before the race, namely July 1, the twelve competing cars were inspected and weighed at the town of Naas, the county town of Kildare. Several of the cars were found to be over the weight limit of 1,000 kilograms (or just under one ton), and these had to be stripped of everything not absolutely essential, in order to bring them within the regulation. It was a curious sight to see to what straits some of the competitors were brought in endeavouring to reduce the weight of their vehicles, every minute particle of unnecessary material being removed in the process.

The race was run on July 2, 1903, and thanks to the Local Government Board's regulations, the roads were, on that day, to all intents and purposes the private property of the A.C.G.B. & I.

The order of starting had been arranged as follows:—

Before the race started, two pilot cars were sent round the course as a warning that the racers would follow shortly, but by a mistake they both followed the western circuit and thus the eastern circuit did not know that the race had begun until the actual competitors appeared. Selwyn Edge was started off at 7 A.M., and the others followed at intervals of seven minutes. In order that very high rates of speed should be avoided in populous places where danger might be expected, nine controls were established on the course. Upon reaching a control each car had to stop and proceed over a measured portion of the road at a low speed, an allowance being made in the final reckoning for the time thus lost.

The eventual result of the race is given elsewhere.

Mr. Winton, who started eleventh, was in trouble at once, through the choking of the spray tube of his carburetter, and was delayed for about an hour at the starting-point.

The English competitors were remarkably unfortunate. Stocks on his first round over the eastern circuit met with an accident through mistaking the road, his car ran into one of the wire fences previously mentioned which became so entangled with the vehicle that it was too damaged to continue, and thus Stocks was early out of the race. Jarrott unluckily came to grief through his steering-gear snapping and causing the car to turn over, but fortunately he escaped serious injury.

When this mishap took place, wild rumours spread around the course to the effect that a terrible smash-up had occurred.

It was at this point that Baron de Caters behaved in such a chivalrous manner. Knowing that the spectators on the Club grand stand would be feeling anxious about Jarrott, he actually stopped his car to state that although the vehicle was smashed the driver was not seriously injured. When one considers the keen excitement of the race and realises the importance of every second lost, the sportsmanlike action of Baron de Caters can be appreciated. These unfortunate accidents left England with only one representative at a comparatively early stage.

Edge was, however, also in difficulties, as will be seen by reference to the times of the several cars quoted above, the chief trouble apparently being the difficulty of keeping the tyres on the back wheels of the car, owing to the enormous power developed and the high speed at which it travelled. Later, a Mercedes car, driven by Foxhall Keene, had to retire on account of the rear axle breaking, and for a similar cause the car driven by Baron de Caters had subsequently to be withdrawn.

The American cars made a very poor show, and went out one by one at various stages. It is safe to say that the industry is in its infancy in the United States, at all events as far as racing machines are concerned. As a result of the race the competitors must have realised that a car, the highest speed of which is fifty miles per hour on the level, is of no use for the purpose of a long road race; for it is obvious that a much higher speed is necessary in order even to remain in the running. One of the strongest points in connection with the Mercedes cars which told so much in their favour was the ease with which they could be started, and the smooth manner in which the gears worked.

The Lord-Lieutenant of Ireland, the Earl of Dudley, took considerable interest in the arrangements for the race, and did a great deal towards the successful carrying out of the proposal for it to be run in Ireland; and there can be no doubt that it did much good for the country, for many thousand pounds were spent there which otherwise would probably have been spent in France.