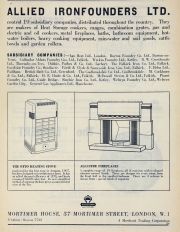 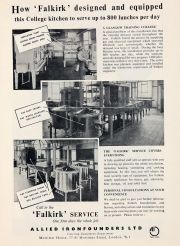 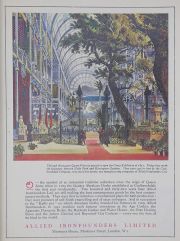 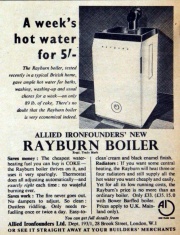 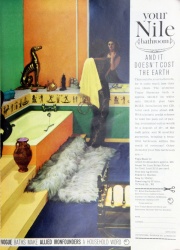 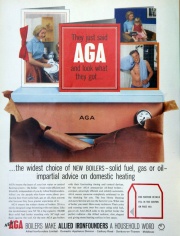 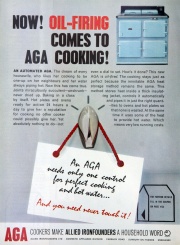 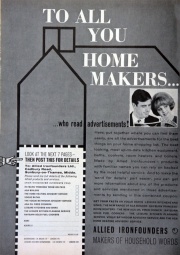 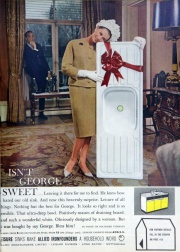 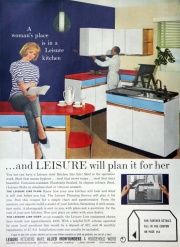 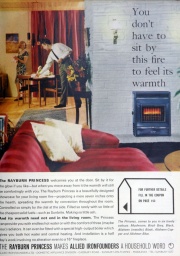 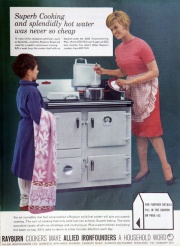 1929 Formed with ten subsidiary companies including -[1]

1929 Other companies were acquired later including -

In the 1950s Britain had several million houses that were considered sub-standard. These houses had been built during the late Victorian era and, although well constructed, had no hot water supply, no bathrooms and no inside toilets. It was evident that most of these houses were too good to be demolished but the implications for renovation weren't known. See below: Stockton-on-Tees Test Houses.

1951 Ten of the subsidiaries of Allied Ironfounders Ltd, which was formed in 1929, make cast iron rainwater good.

Allied Ironfounders Ltd, a representative body of the iron manufacturers, had a legitimate interest in establishing what demands there would be on their industry in the years ahead due to the legal requirements of the recently introduced Housing Act which meant that all housing had to meet a minimum standard.

1969 Allied Ironfounders was taken over by Glynwed, in preference to a bid from Acrow which was seen as a poorer fit[5].

1953 Stockton-on-Tees was chosen as the place to carry out an innovative experiment in housing renovation. Stockton was seen as being representative of towns all over the country where a large proportion of the housing stock fell well below the new minimum standards. At that time about 7,000 houses in the town (almost a third) had no hot water supply.

The test was set up by Allied Ironfounders in partnership with the Local Authority. Alliance Street was chosen for the test as the housing met the criteria of being worthy of renovation. A block of four houses was acquired by Allied Ironfounders for the purposes of the test and plans for the conversions were drawn up. These would include the demolition of the small, cramped scullery, the coal store and the outside WC. These would be replaced by a new brick structure in the back yard containing a much bigger and better scullery, a bathroom and an indoor toilet. The old kitchen ranges were to be replaced with a modern combination grate and back boiler, providing heating, cooking facilities and domestic hot water.

A local firm was contracted to carry out the work on the four houses - numbers 38, 40, 42 and 44 Alliance Street. The workmen moved onto the site on 19th March 1953. Twenty three days later the first house had been completed, and by 17th April all work was finished and the workmen had left the site.

Each house had been converted at a cost of £349.17.3d, (£349.86p), each. The costs were shared between Allied Ironfounders, as the owners of the property, and the Local Authority in the form of housing grants.

The Stockton Test, as it came to be known, was watched by Housing Authorities throughout the land and was hailed as a great success and a shining example of what could be achieved. It was reported in all of the national newspapers, including the Times, and the BBC even showed a documentary on the conversions.