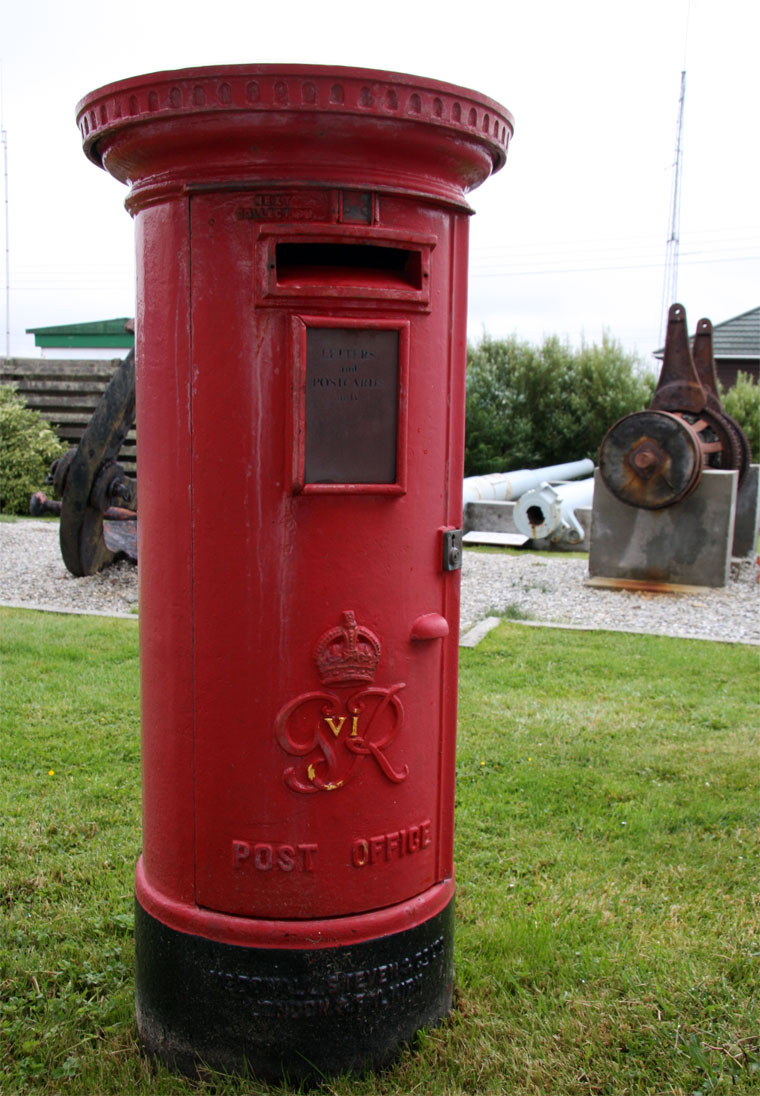 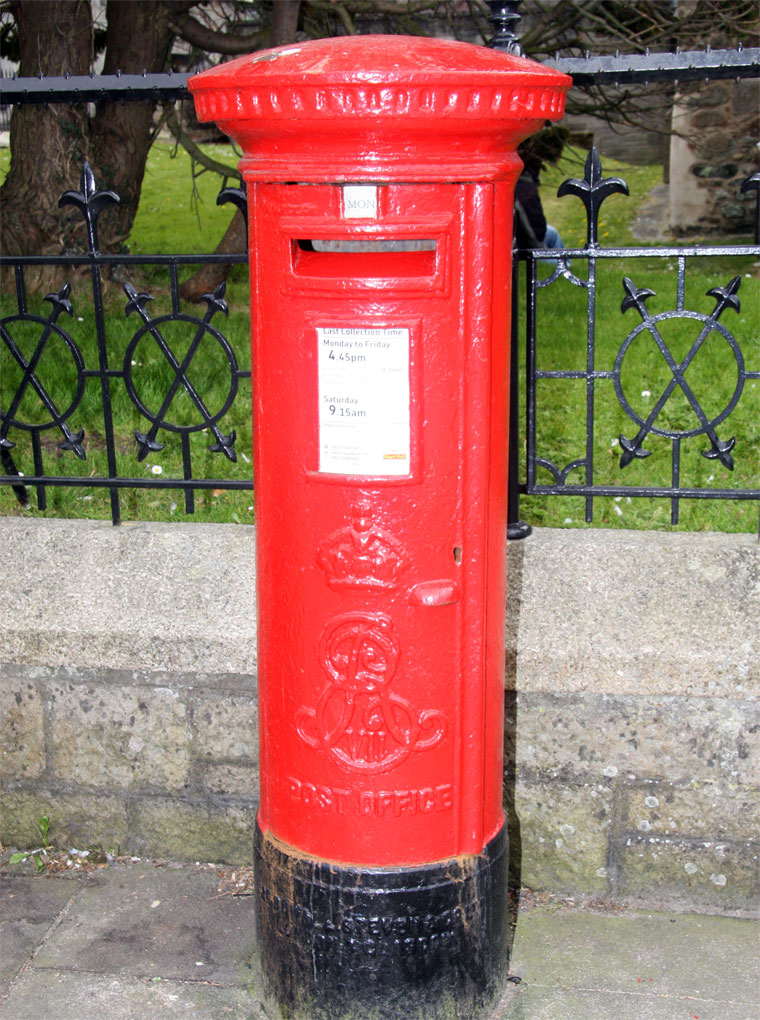 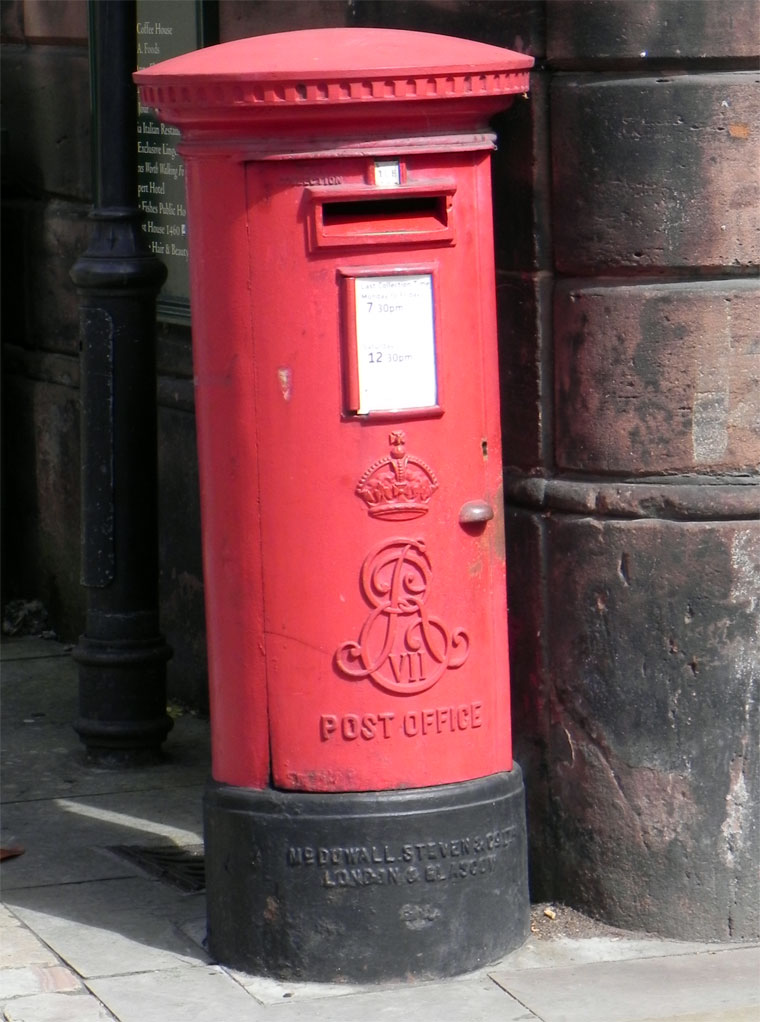 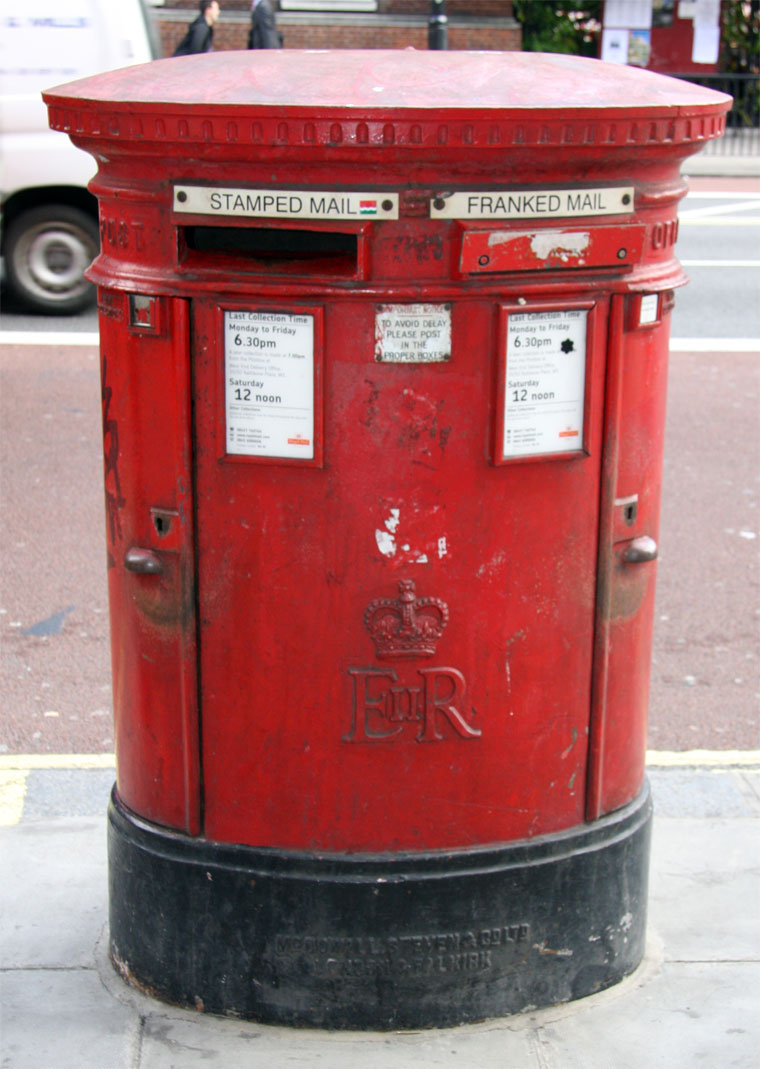 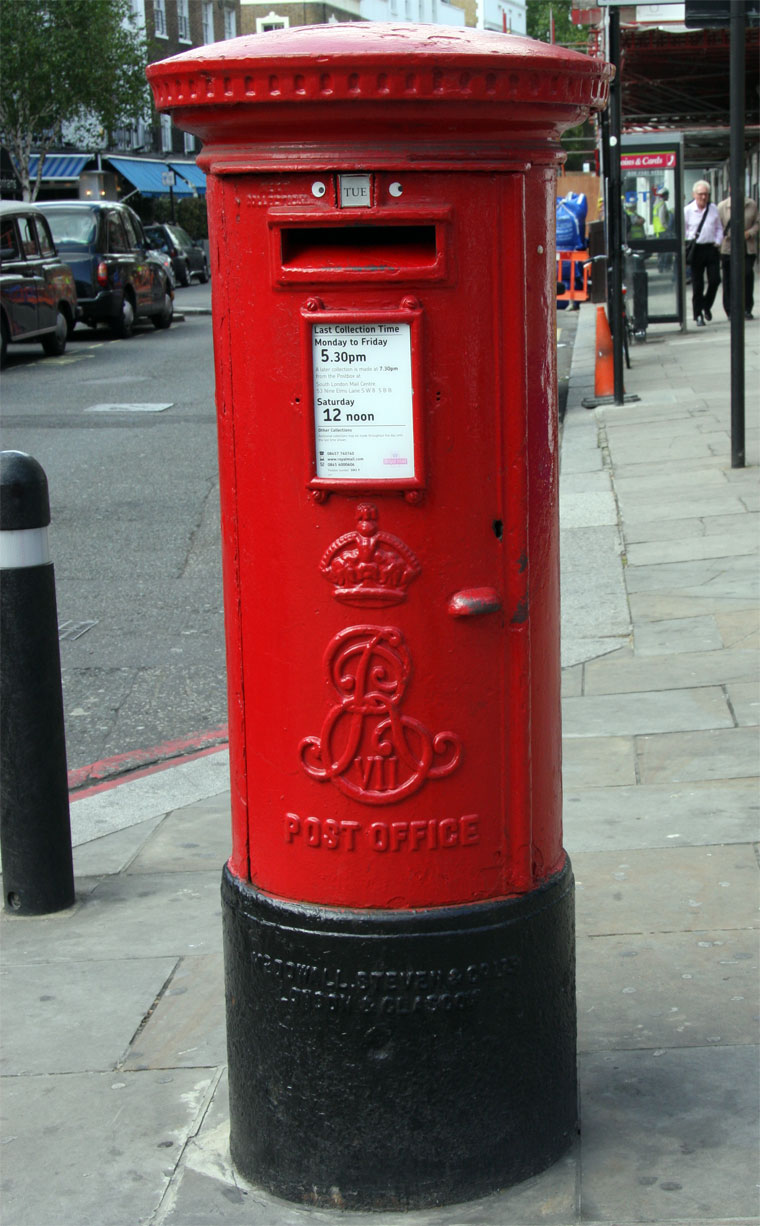 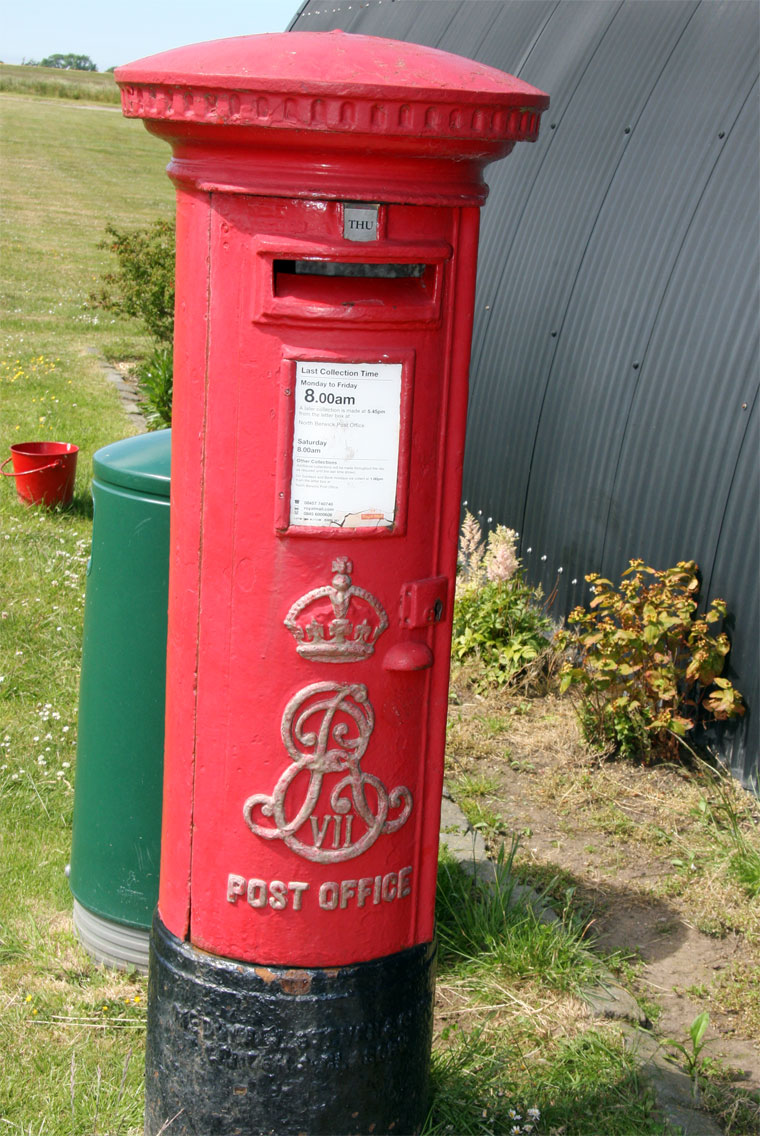 Pillar box. Exhibit at the National Museum of Flight. 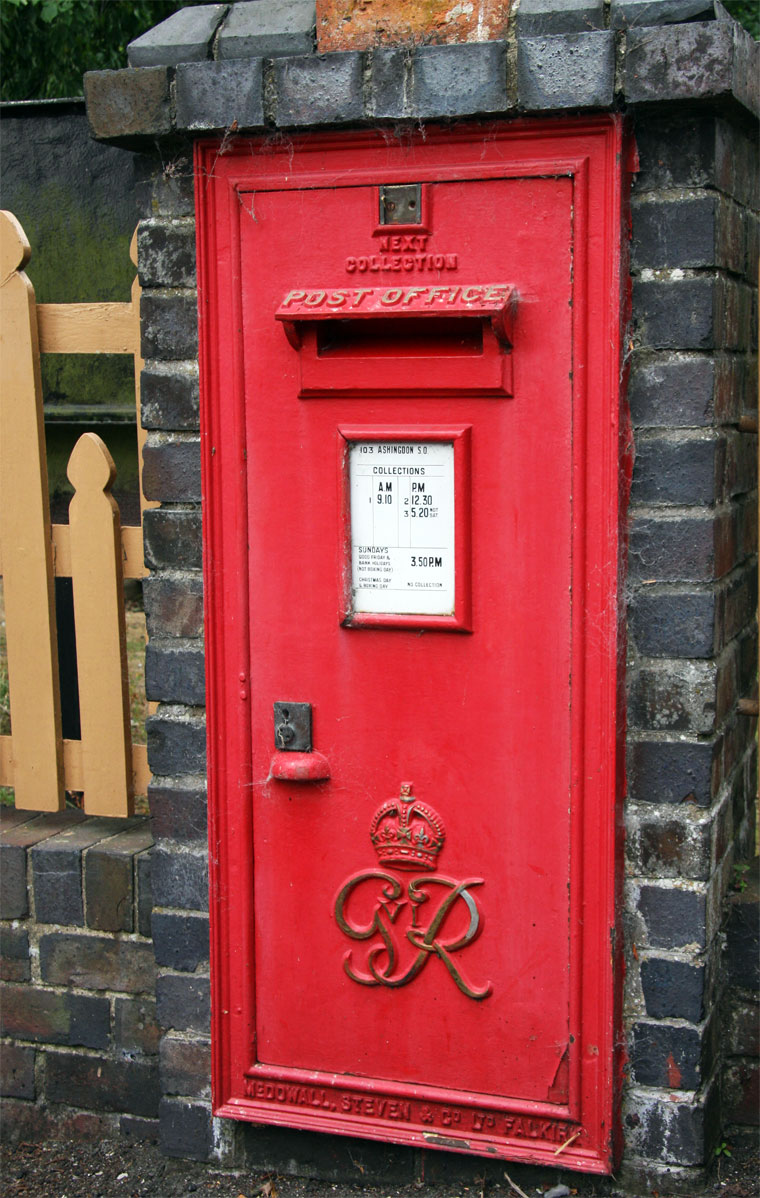 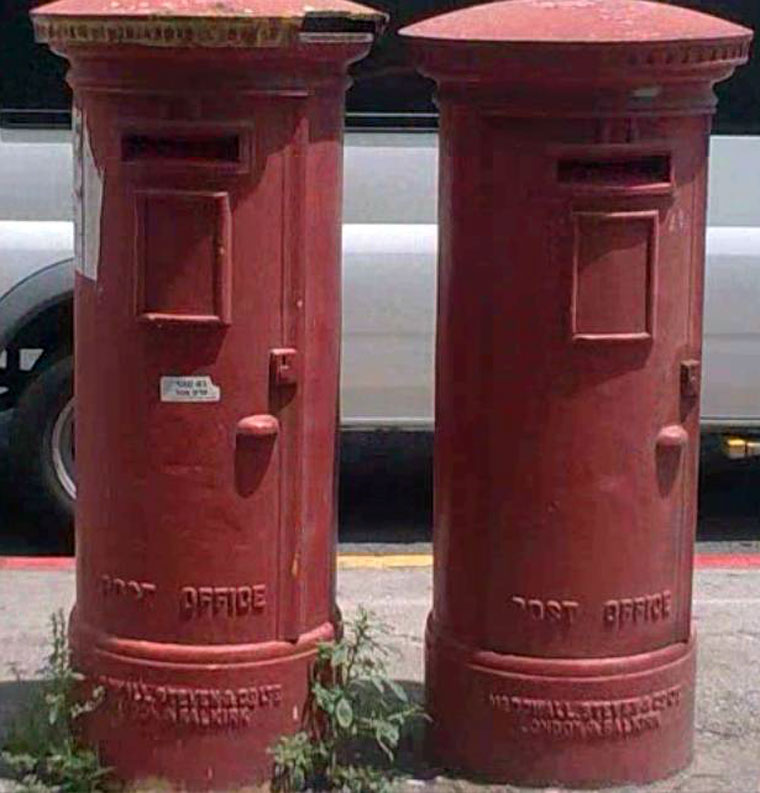 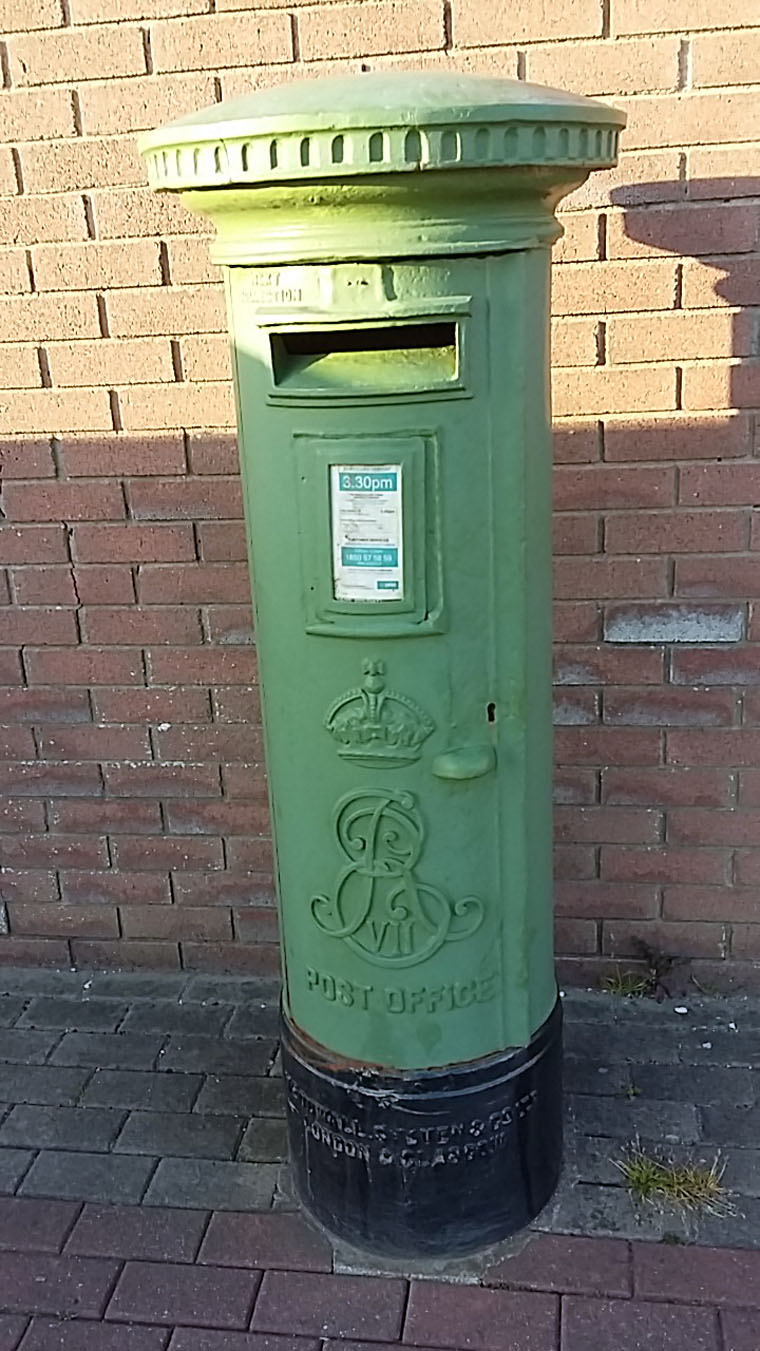 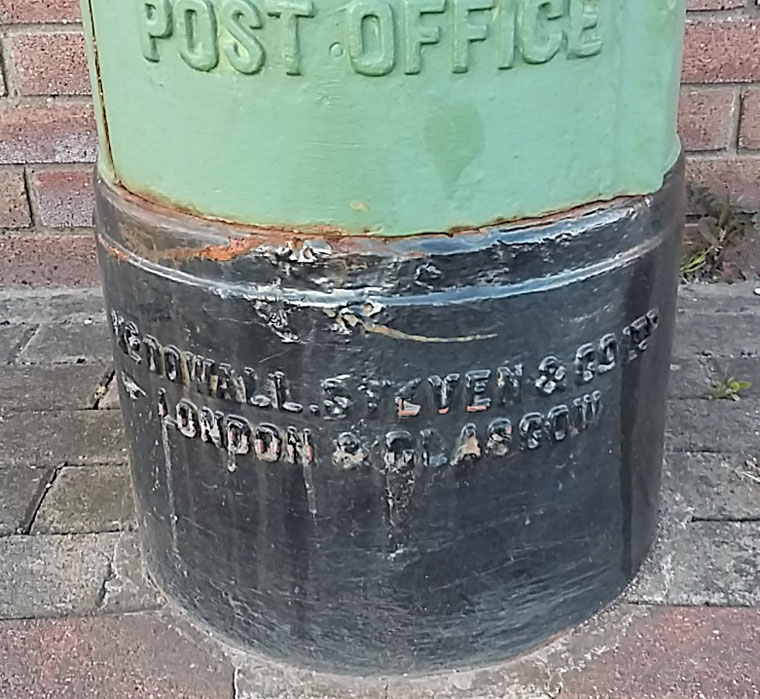 McDowall Steven had their roots amongst the founders of the cast iron industry in Scotland.

1804 Thomas Edington started the Phoenix Foundry in Glasgow, perhaps the first true ornamental ironfounders in Glasgow. His experience and wealth arose from his involvement with Carron Co, Cramond Iron Works, Muirkirk Iron Works and Clyde Iron Works. His son James worked with him at the Phoenix Foundry before departing to establish the Eagle Foundry with John McDowall around 1820.

1828 Changes to the partnership resulted in changes in the name to McDowall and Robertson and Milton Foundry at Port Dundas.

1844 Further changes in name to McDowall and Co Ltd and move to Corn Street in Port Dundas.

1862 The most prolific period of the Foundry's success followed another move to 142 Woodside Road in Glasgow from 1862 to 1909, where the company became McDowall Steven and Co Ltd and the foundry became Milton Ironworks.

Successive generations of the McDowall family were involved. The fountain still situated on Ayr's esplanade is an excellent example of the company's work. Other examples of this fountain were found in Glasgow and Biggar, the latter dismantled in the early 20th Century and shown in one of the rare catalogues still existing. The topmost section of the fountains show an otter clutching a fish in its mouth, the outer facades an almost cartoon-like octopus. The Glasgow example is described by a handbill in the Mitchell Library, Glasgow. It was erected for the 1888 International Exhibition in Kelvingrove Park, where the Doulton Fountain was also found before removal to Glasgow Green in 1890. The McDowall Steven fountain was moved to Cathedral Square in 1890. The fountain had four canopied drinking fountains around its perimeter. The company also provided a thousand ornamental division standards for the machinery annexe, along with a variety of garden seats.

Several excellent bandstands of theirs are still to be found in Duthie Park, Aberdeen, West Park Wolverhampton, and in Shrewsbury. These show innovation in construction using wrought iron sheet with cast iron roof formers. The quality of the bandstands in constructional detail is matched by the fine detail and quality of their castings. The façade of Central Station in Glasgow over Argyle Street is an impressive example, and many lamp standards are found with the McDowall Steven stamp, including some excellent examples in Cheltenham. Their catalogue also notes exports of terraces and balconies to Australia. An excellent example of one of their drinking fountains is found in Kay Park, Kilmarnock, outlasting the grand Coalbrookdale fountain erected in the same park.

1904 Set up works in Laurieston

Many letter boxes bear the company stamp, most of these originating from the period when the company relocated to Falkirk, taking over Laurieston Ironworks around 1912.

1922 Cockburns linked up with McDowall Steven and Co; Planet Foundry Co, and Coalbrookdale to form the Light Castings Group.

1934 Castlelaurie Iron Works (set up by Falkirk Iron Co in 1875) was taken over by McDowall Steven and Co.

1964 McDowall Steven and Co was dissolved.