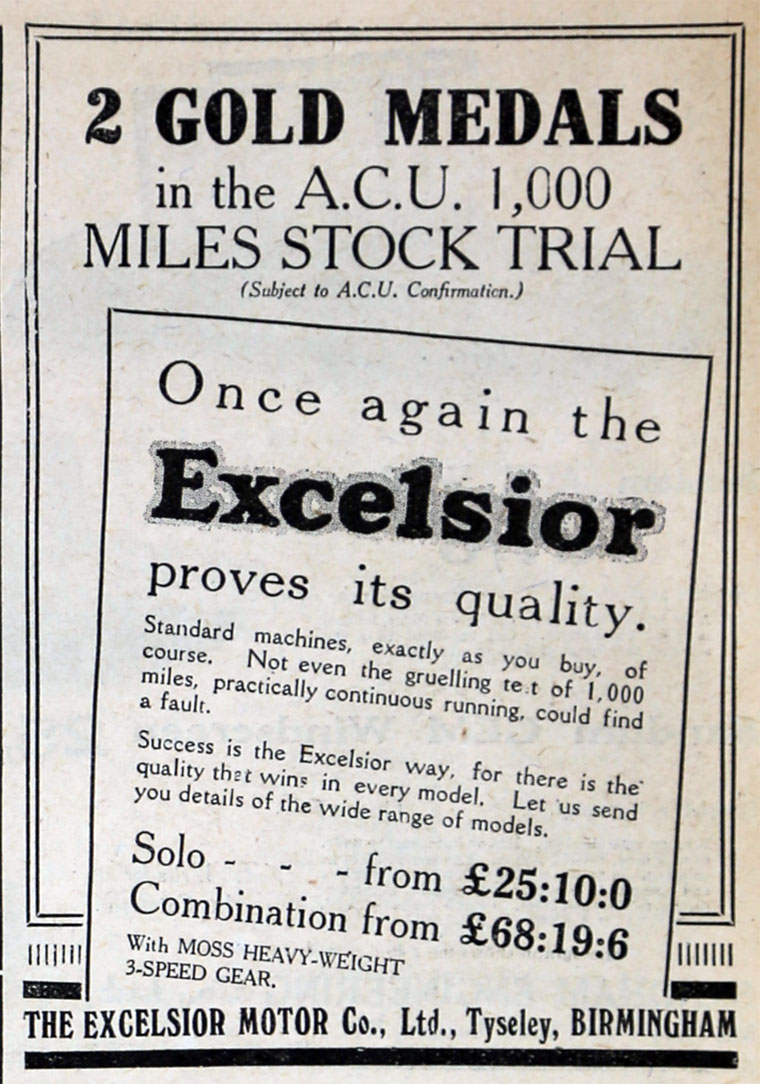 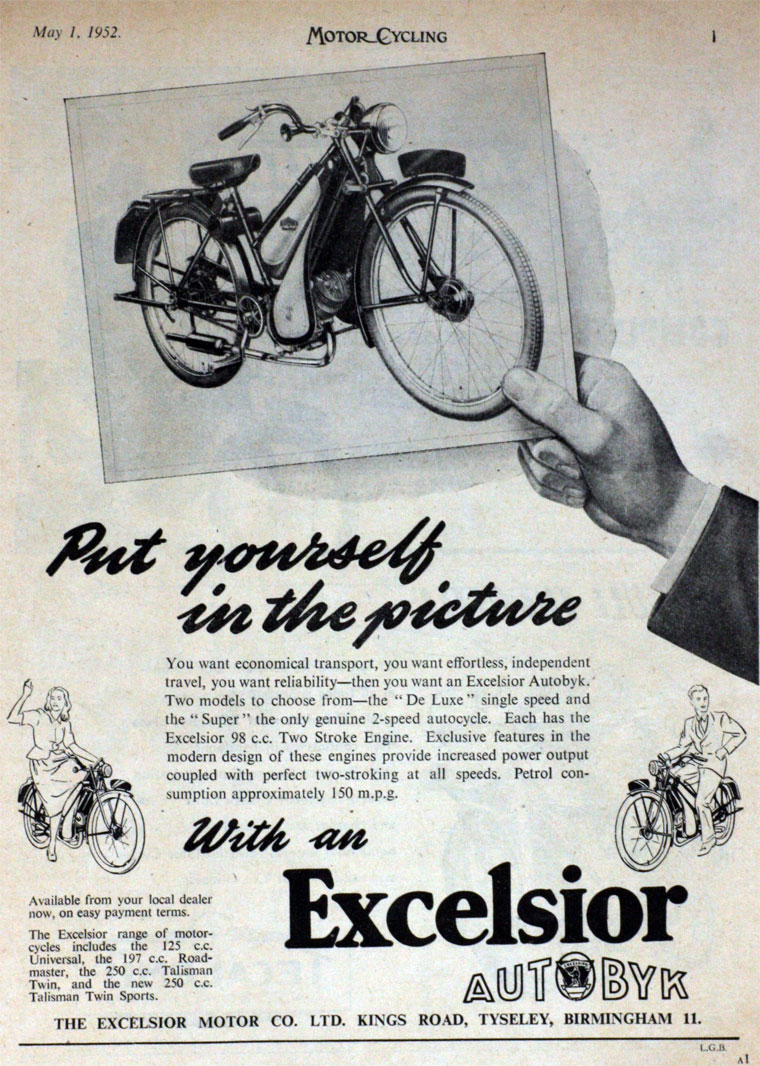 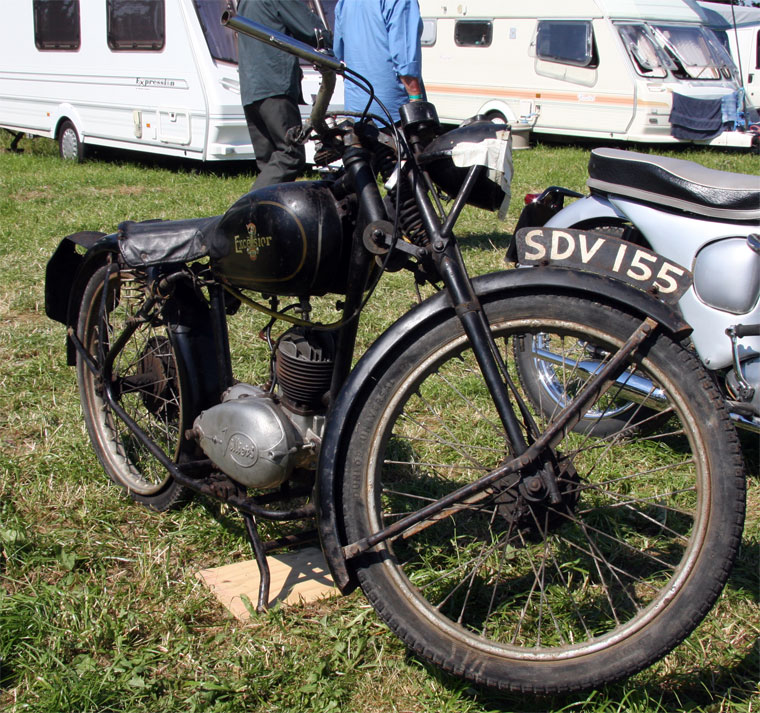 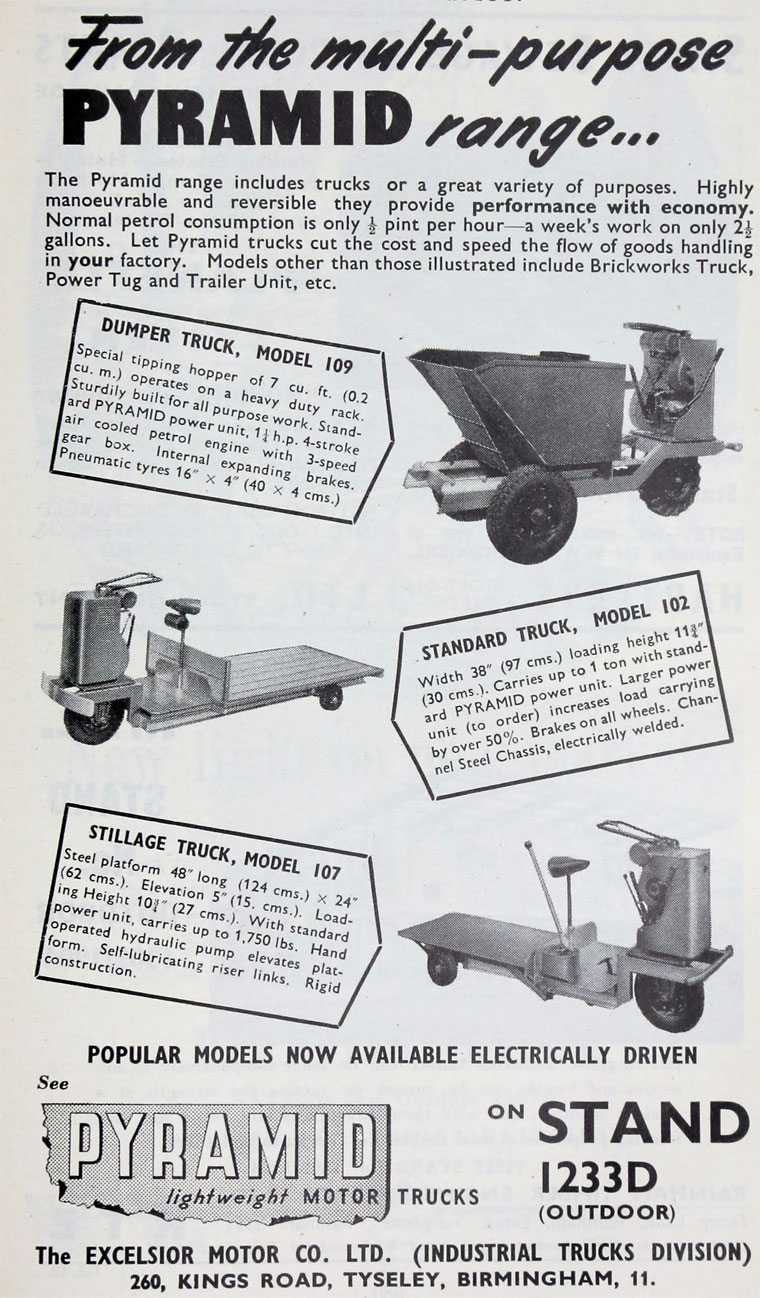 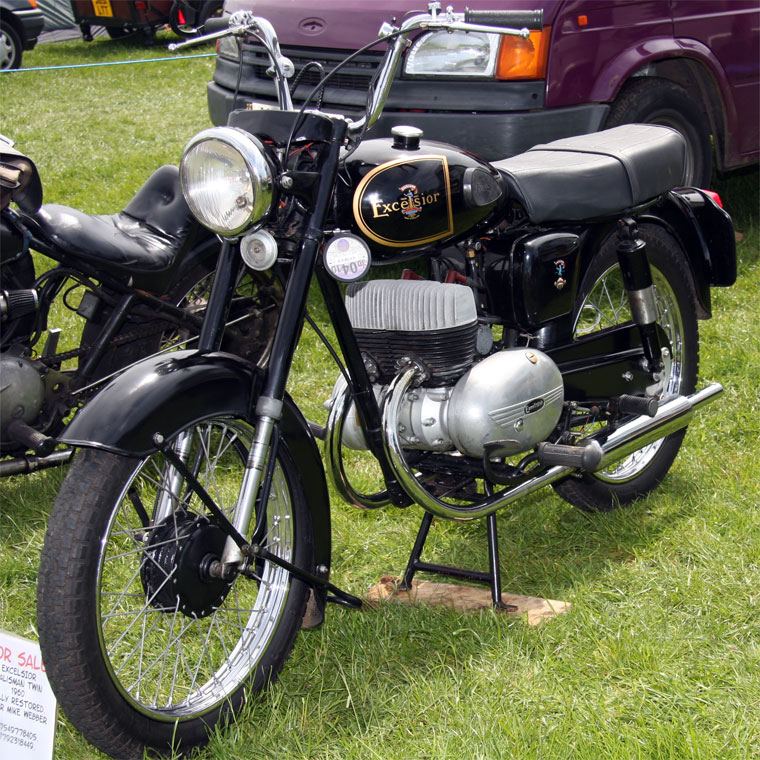 1921 The firm moved to Kings Road, Tyseley, Birmingham, and started to trade as the Excelsior Motor Co. The Walker family (father Reginald Walker and his son Eric Walker) took over and after a couple of years, they dropped the original name of Bayliss, Thomas and Co

1923 More models were added to the range, using engines by Blackburne, Villiers and Bradshaw. These were used on a wide variety of bikes from sidecar to TT models.

1924 The company produced a 600cc side-valve single. Two more models were added with a 545cc Blackburne engine, one for sidecar work and the other a TT model.

1925 Villiers 172cc, Blackburne 249cc and Bradshaw 349cc engines joined the list, but the twins were dropped.

1927 A 490cc model was added to the range, when engines were either Villiers or JAP

1928 This continued with the addition of just one two-stroke of 247cc.

1929 Other models were added to the list. Their first major racing success occurred that year, when they took the Lightweight TT race on a B14, soon to be their most popular model.

1930 The range had become very extensive, ranging from a 147cc Villiers machine to a 490cc JAP

1931 Even more models appeared, including the Universal, powered by a 98cc Villiers engine and priced at fourteen guineas - the lowest of all.

1933 The company had always supported the TT and, for that year's 'Lightweight', produced a winning motorcycle with a special Blackburne engine known as the Mechanical Marvel - so called because of four radial valves opened by twin high-camshafts using push-rods and rockers, twin carburetors and dry-sump lubrication.

1935 The four-valve 250cc Manxman was released, later produced in 350cc and 500cc sizes, as well as a 250cc model with a fully-enclosed, water-cooled engine.

1937 They made a 98cc Autobyke, the forerunner of modern mopeds, and built a 98cc Sprite for Corgi.

Wartime (1939-1945) The firm built the Welbike, which eventually became the post-war Corgi. The Welbike was a small British single-seat motorcycle devised during World War II at Station IX - the Inter Services Research Bureau - based at Welwyn, UK, for use by SOE (Special Operations Executive - 1940 to 1946). Subsequently it was not much used by SOE, but many were issued to the Parachute Regiment and used at Arnhem during Operation Market Garden. It was designed by the pseudonymous John Dolphin and powered by a Villiers 98 cm3 single-cylinder two-stroke petrol engine and was designed to fit into a standard parachute airdrop container. 3,853 units were build between 1942 and 1945.

In the lean years following the Second World War, racing and luxury machines were sidelined in favour of relatively inexpensive two-strokes, the flagship being the Talisman twin, powered by a 243cc four-speed Villiers engine. Their best seller in this period was the Consort, achieving a peak production of 10,000 units annually.

1949 They produced the Talisman, a smooth two-stroke with 180-degree crank. A later, 328cc twin-carb sports version did not sell well.

1950 The Talisman Twin added, with a 243cc Excelsior two-stroke engine, in a plunger frame also used by other models.

1953 The Universal was replaced by the Courier with a 147cc Excelsior engine. Another new model was the Consort with a 99cc Villiers 4F engine in basic cycle parts.

1954 In came the Roadmaster with an 8E engine and pivoted-fork rear suspension, which also went on the twins.

1957 Saw the introduction of the Skutabyk, with side panels and a fully enclosed engine unit. The range continued to grow until the end of the decade, then sales began to slow.

1959 The company released the Monarch, a re-badged DKR scooter with an Excelsior 147cc engine.

1960s The scooter had new bodywork and more variants, but this had little effect on sales and the range, including the Monarch, was reduced. Even the production of purchase tax exempt models in kit form failed to revive interest.

1963 The range was reduced to two models with Villiers engines.

1965 Both the above models had gone, the marque came to an end and the name passed to the Britax organization.