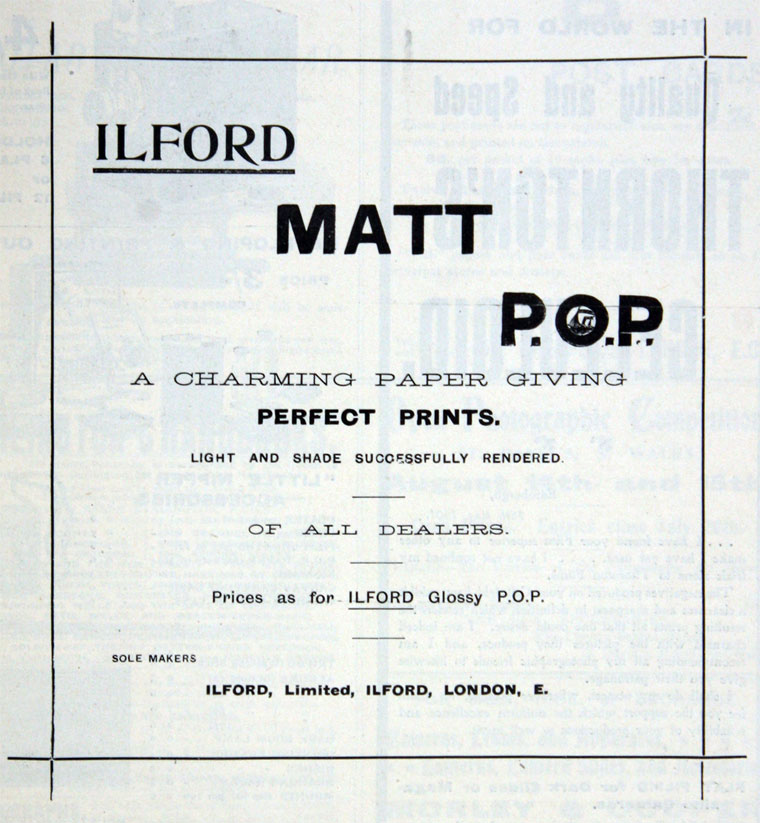 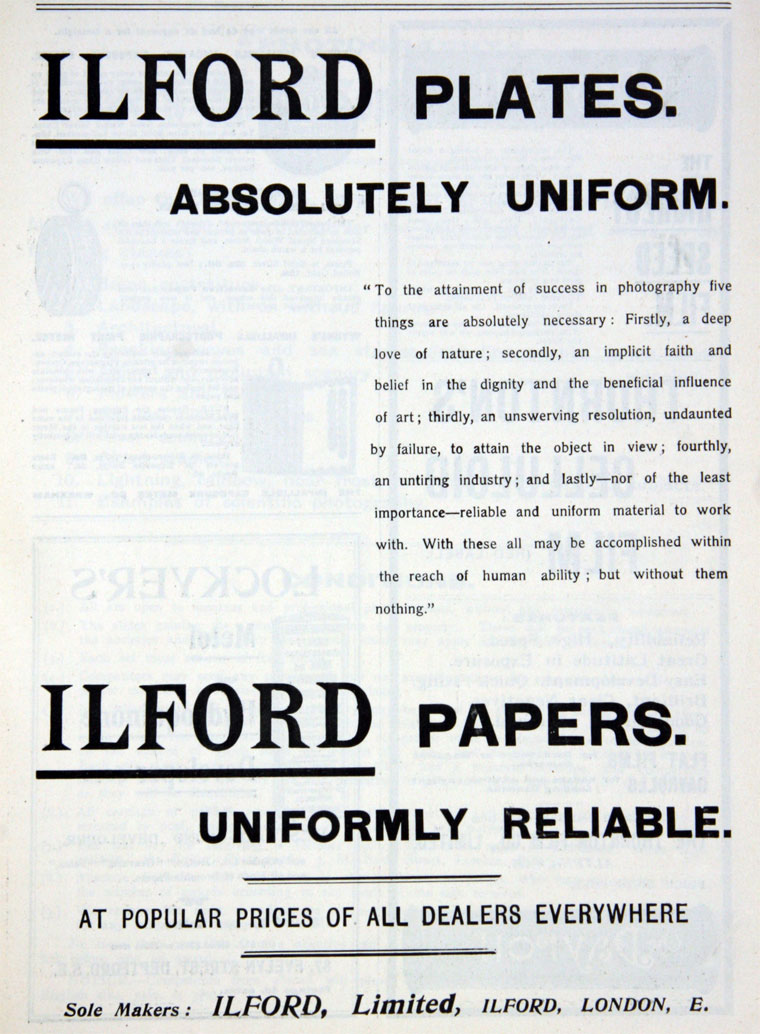 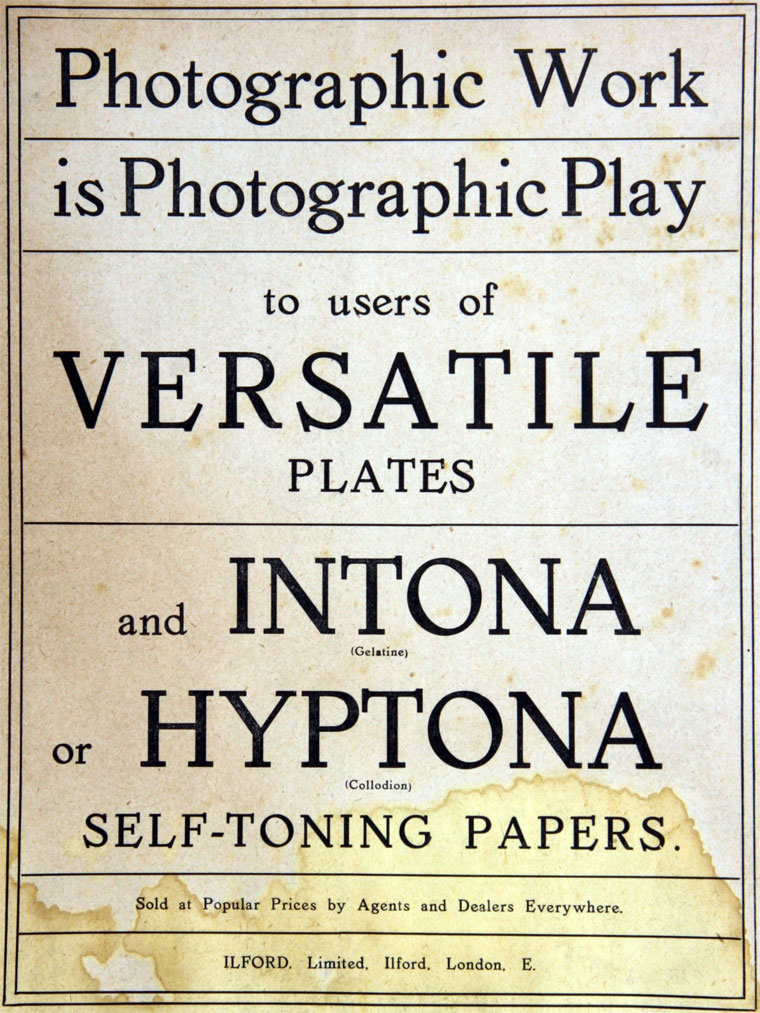 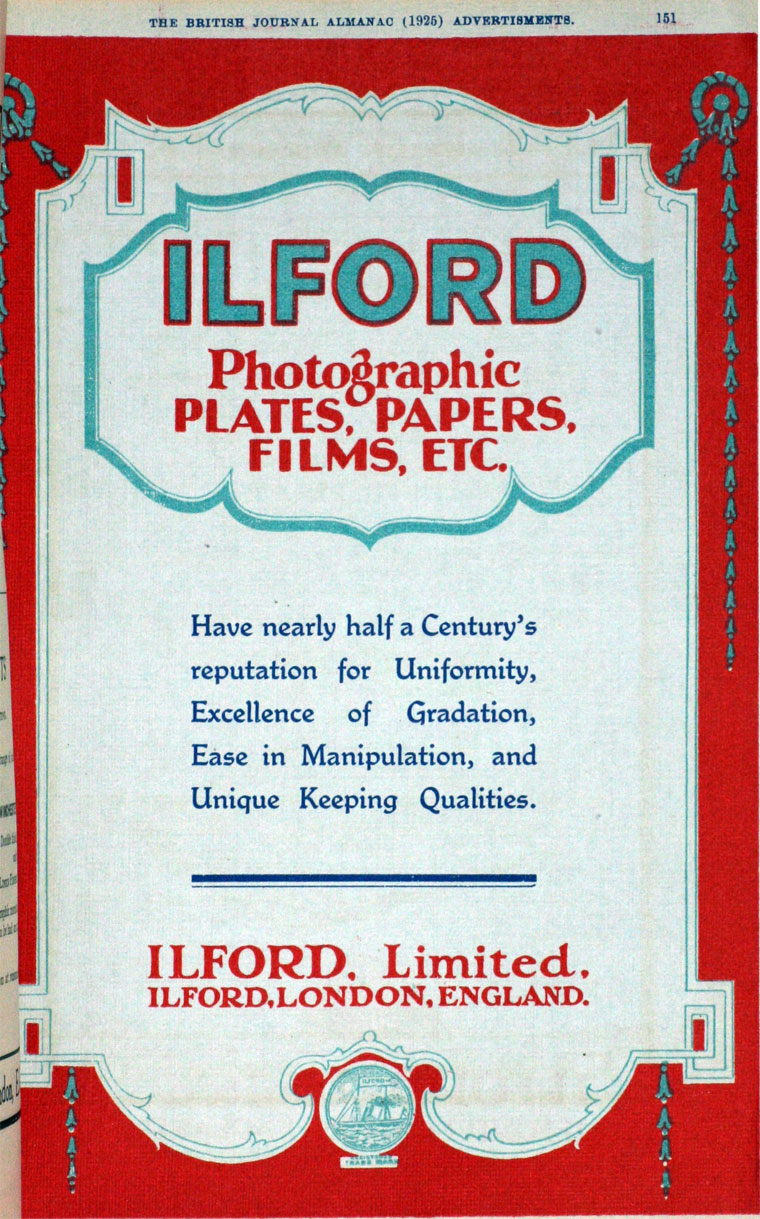 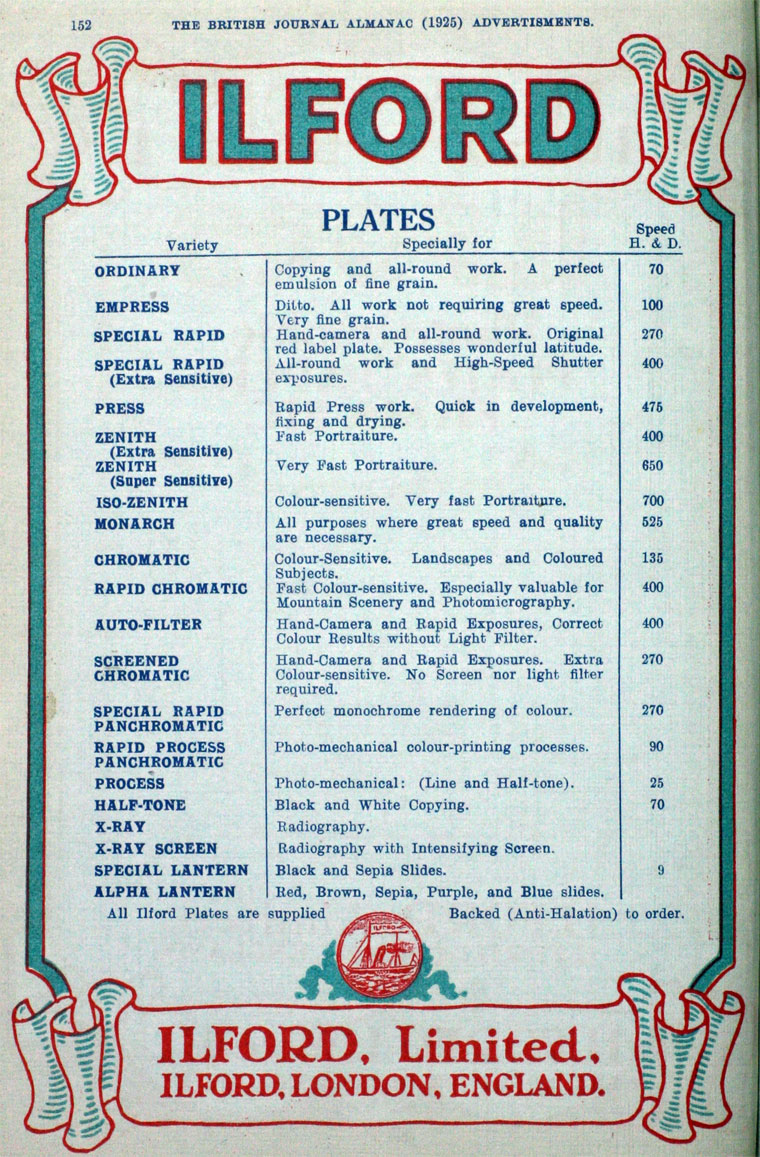 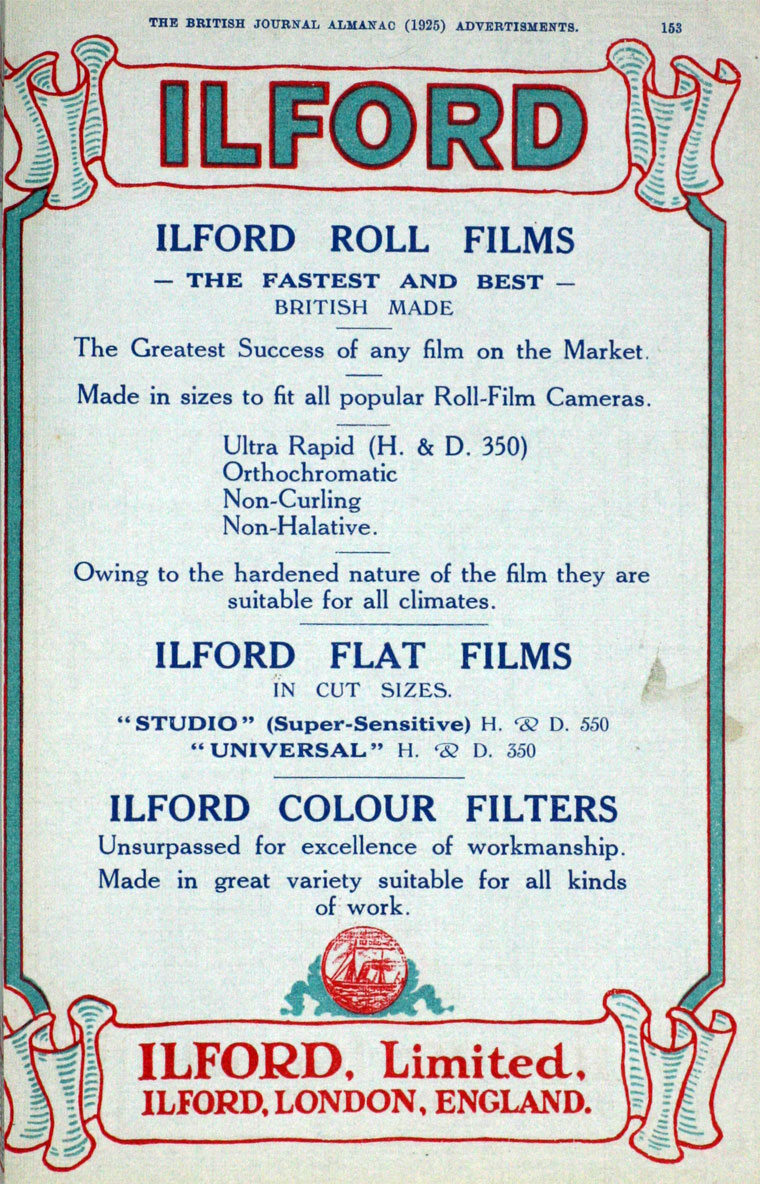 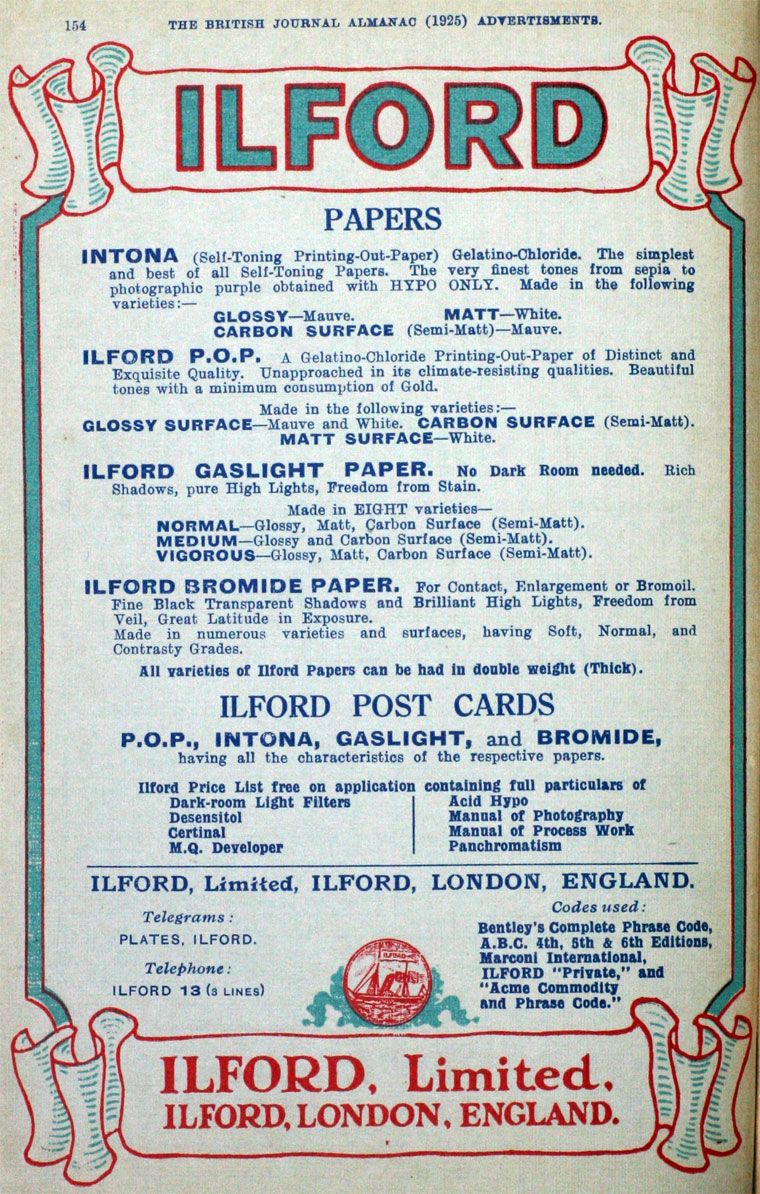 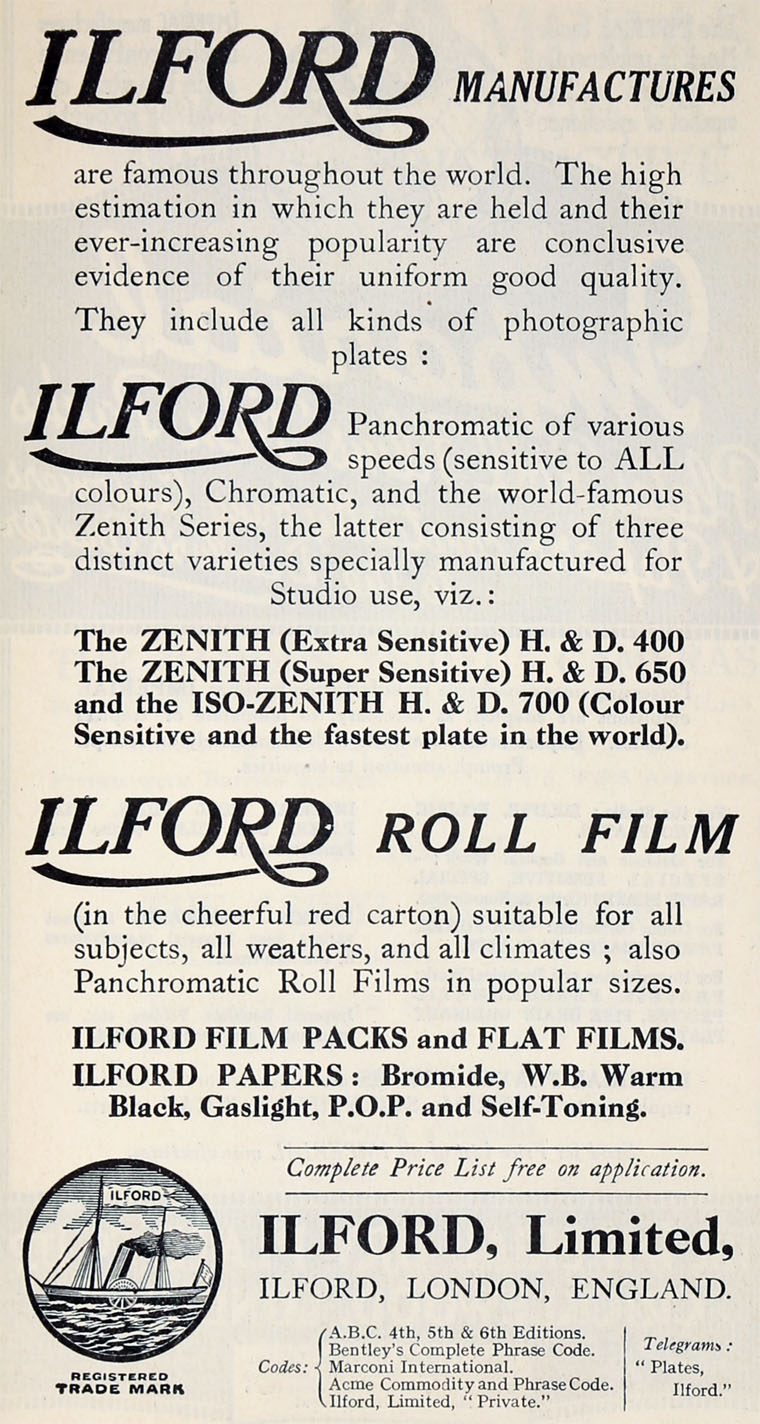 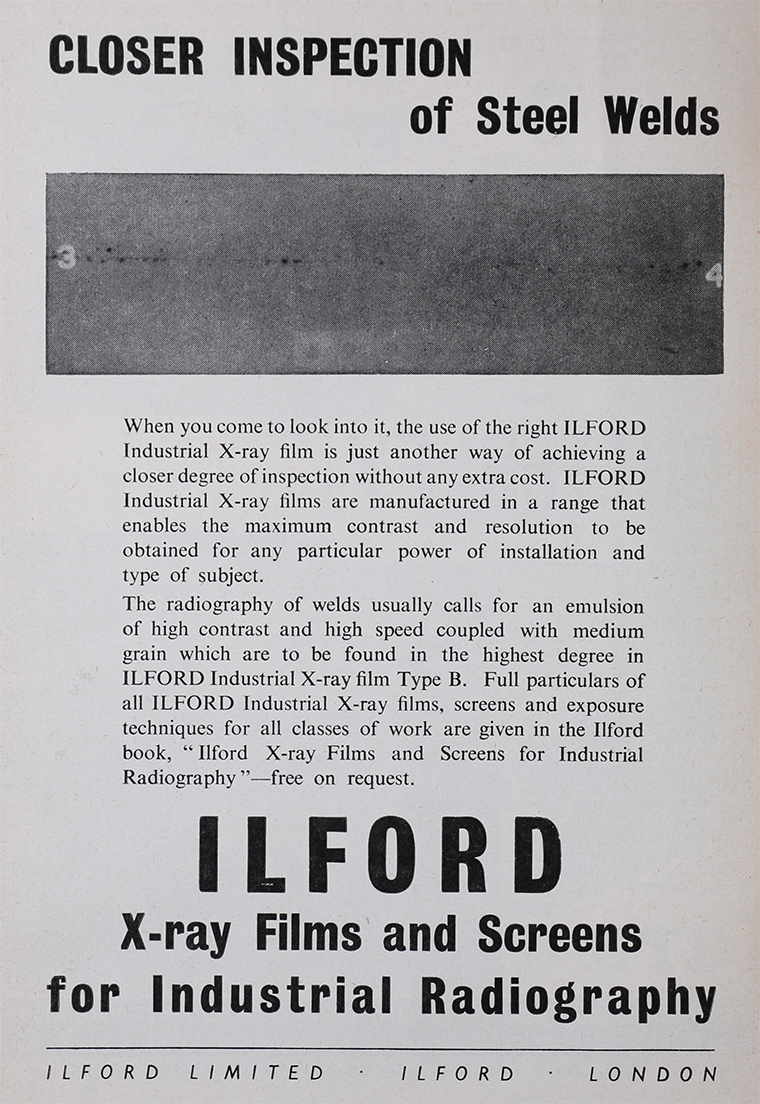 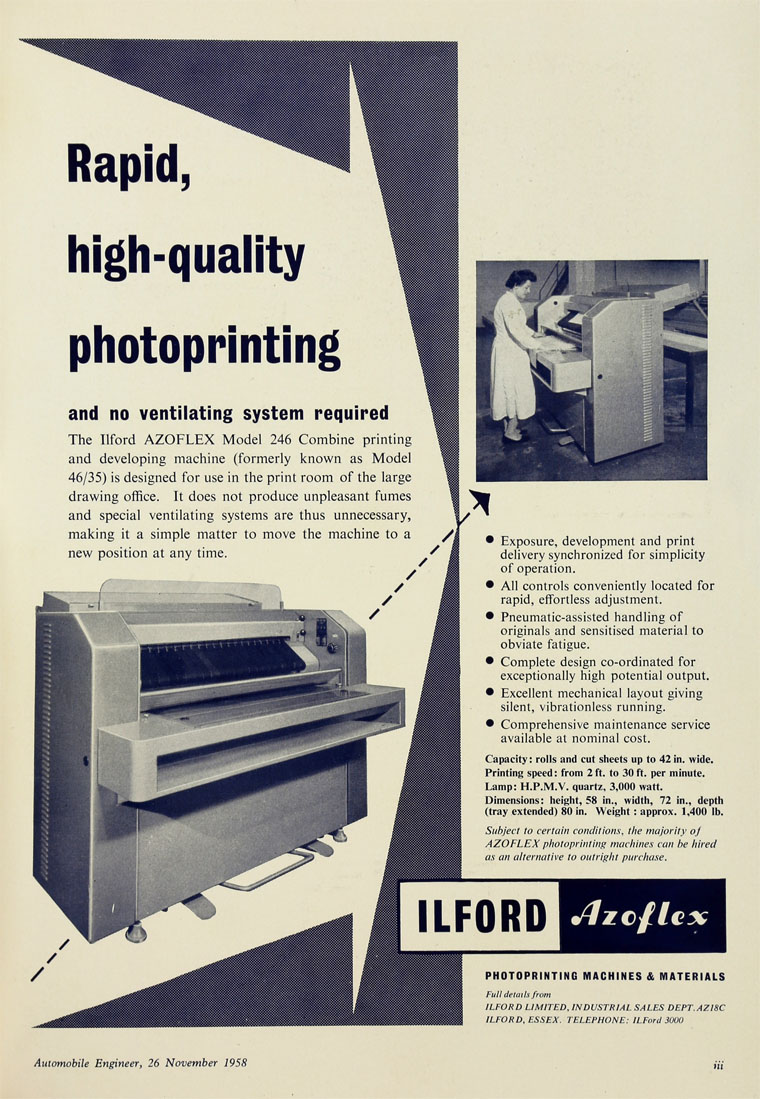 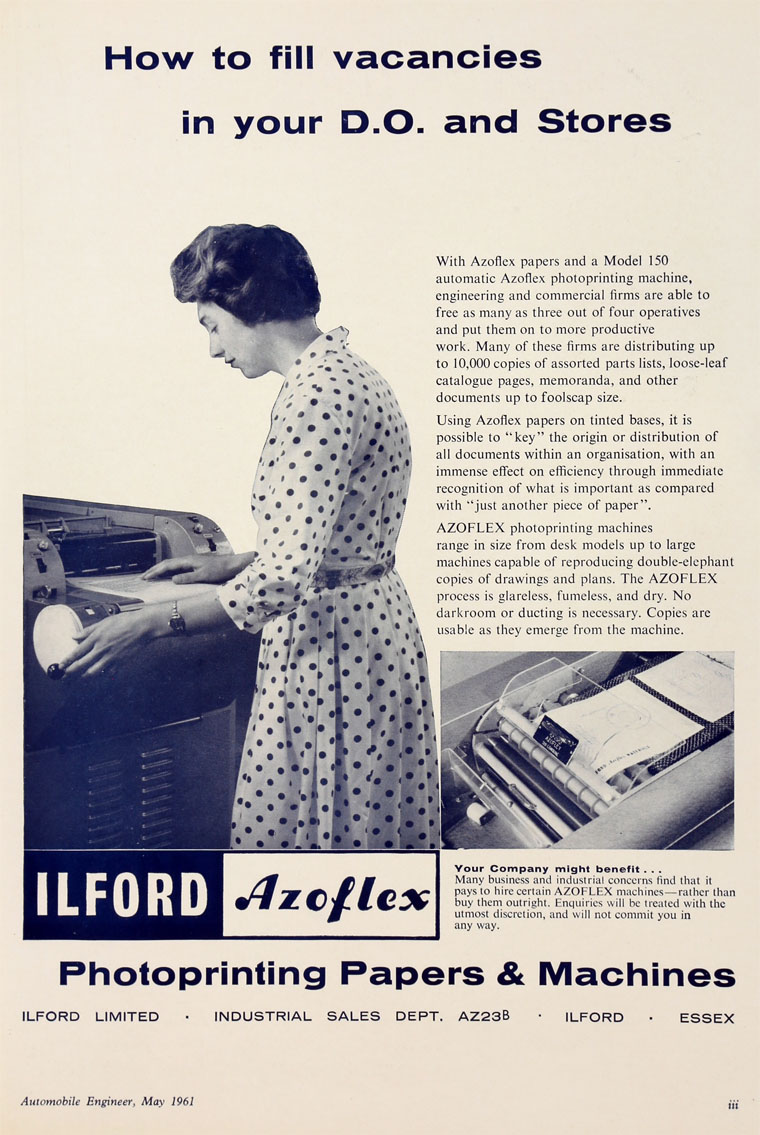 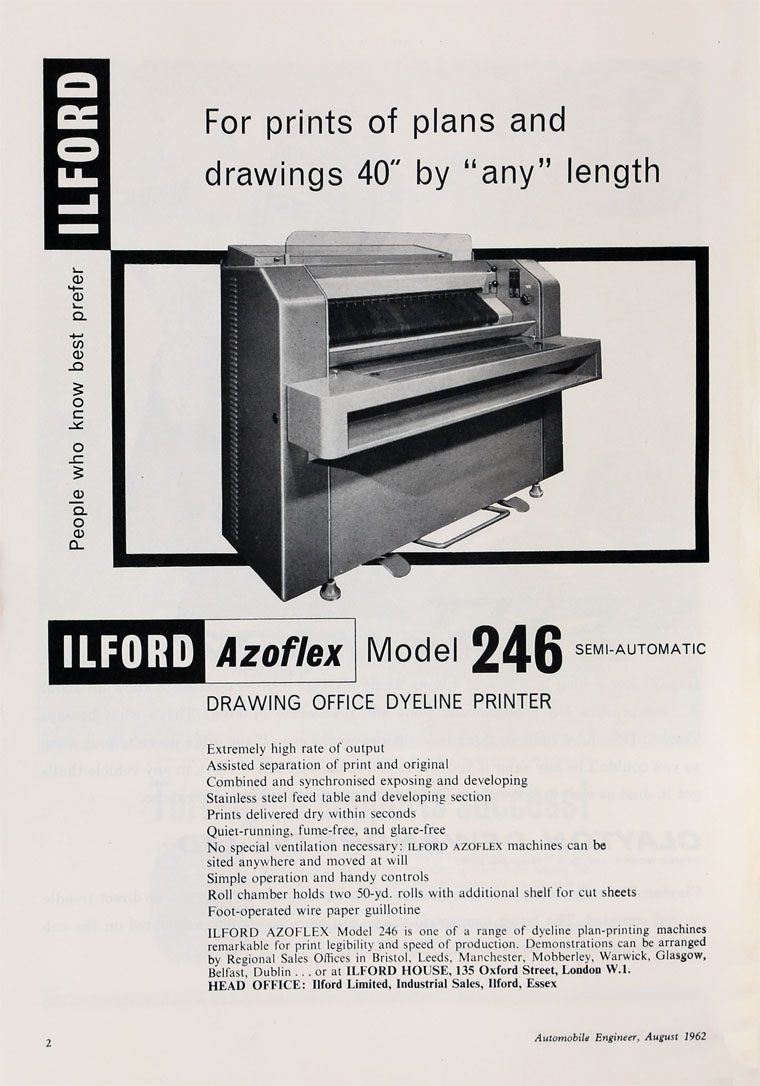 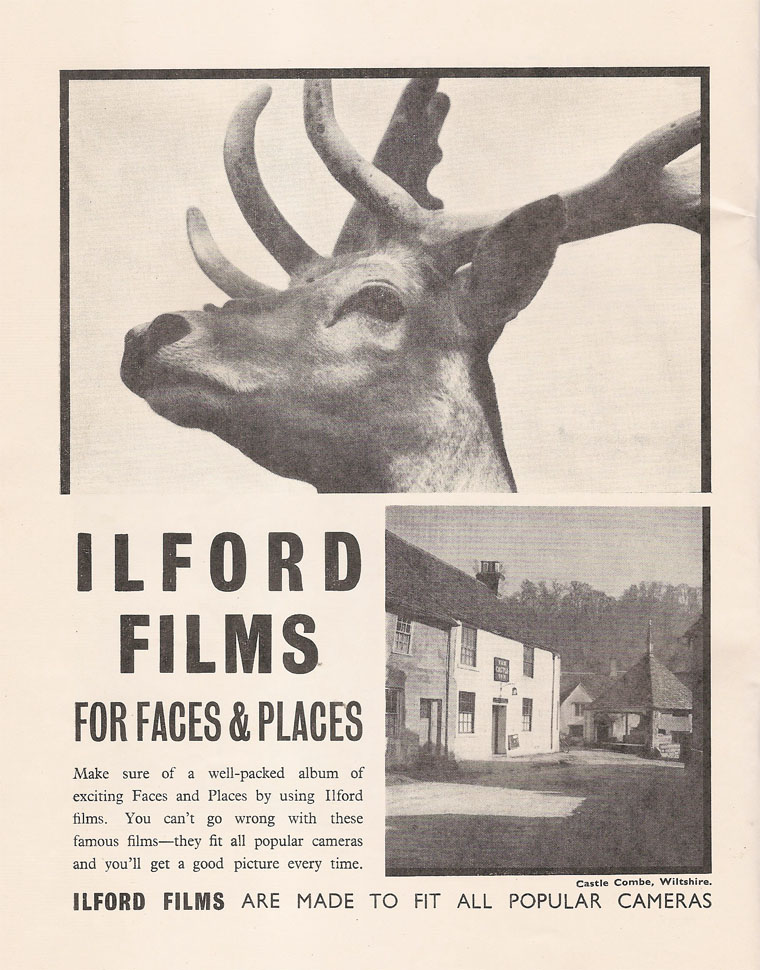 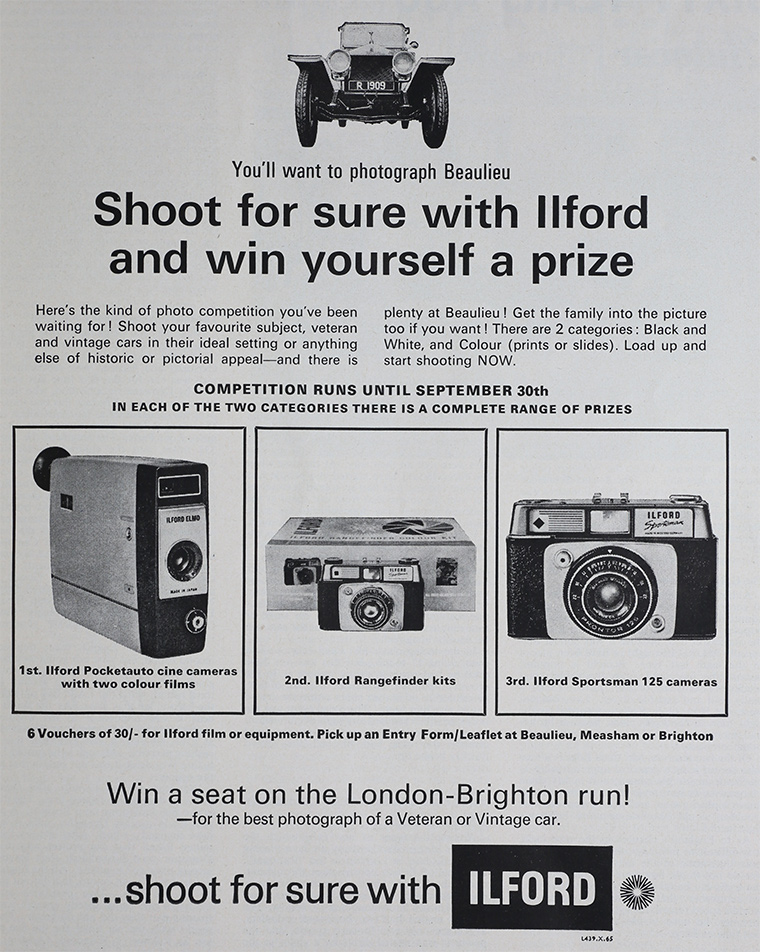 By 1863 Harman was advertising his photographic printing services.

1864 He set up his own business in Peckham, South London, as Alfred Harman and Co

1878 He patented his idea for "producing enlarged photographs with artistic finish".

1883 A factory was built as the company's sales expanded.

1897 and again in 1903, Eastman Kodak approached the company with a view to a take-over or an amalgamation, but was unsuccessful.

1900 The company applied to change their name to Ilford Ltd, but Ilford Urban District Council objected. The name was changed from Britannia Works Co to Ilford Ltd.

1901 Ilford UDC finally approved the name change, provided there was a comma inserted after the name Ilford and that Ltd was spelt in full - Ilford, Limited. The comma was used officially until 1951, but was dropped from advertising c.1935.

1902 Ilford marketed their first camera, the Falling Plate magazine cut film camera. They manufactured their own special film with a cardboard backing.

1907 After disagreements the Board dismissed E. B. Knobel

1912-4 An experimental plant was set up at Brentwood to make roll film.

1915 Ilford daylight loading Roll Film was first introduced but this was not a success.

1920 The move into roll film was finally achieved by setting up the the Selo company for joint R and D, and the sensitising of roll films at Woodman Road, Brentwood, Essex, by Ilford, Imperial, Gem and a consortium of seven other UK manufacturers. The consortium eventually took the umbrella name of Amalgamated Photographic Manufacturers (APM). Ilford still imported its requirements of film base, first from the Celluloid Corporation (USA) and later from Gevaert (Belgium). Selo films were sold by these companies under their own labels. Although the name 'Selo' was officially dropped in 1946, the Brentwood factory was known as 'The Selo Factory' until it was sold and the site levelled in the 1970s.

By 1920 Ilford also had some commercial involvement Thomas Illingworth and Co.

By 1925 the Selo company had effectively come under Ilford's control. The name 'Selo' survived in the film name 'Selochrome'.

1928 First attempt at manufacturing a subtractive type of negative-positive colour 'tri-pak' roll film in conjunction with a small concern called Colour Snaps Ltd. The process proved difficult and was wound up in 1930. Between 1928 and 1930 there were significant mergers between various of the smaller UK photographic companies and Ilford, Limited.

Ilford acquired a site at Mobberley, Cheshire (owned by Rajar Ltd since 1903), in the take-over of the various companies within the Selo organisation formed in 1920. APM, a part of Selo from 1921, was split and a new organisation formed, called APeM (Amalgamated Photographic Equipment Manufacturers ). APeM subsequently (?1929) became part of Ilford, consisting of Rotary Photographic Co; Rajar; Paget Prize Plate Co and Marion and Co. The other part of APM (camera manufacturers Kershaw Optical Co; A. Kershaw and Son and Marion and Foulgar) became Soho Ltd. The merger with APeM led Ilford to exercise more direct control over several previously small independents.

By 1930 Wellington and Ward had joined Ilford.

Over the next 30 years, Ilford's Mobberley site concentrated on the manufacture of photographic paper. The paper was transported to the Essex factory for cutting packing and distribution.

During the 1930s a number of distribution centres were set up in different parts of the country and factories or branches were established in five European countries, India and Australia.

1935 Ilford acquired an interest in Dufay-Chromex of Cockspur Street, London, later Dufay Ltd, for whom it started to manufacture a reversal colour film of the additive type under the brand name Dufaycolor.

1937 Ilford stopped marketing Dufaycolor and the responsibility reverted to Dufay-Chromex of Elstree, Hertfordshire.

1939 Ilford came under the control of the Ministry of Aircraft Production at the outbreak of war.

Between 1918 and 1939 Ilford had acquired directly, or through subsidiaries, some dozen businesses engaged in the manufacture of various photographic goods.

1940 Ilford launched the world's first true 'Multigrade' photographic paper, but it was not a success.

1945 The paddle-steamer trademark, used since 1886, was dropped and the new advertising slogan "Ilford films, for Faces and Places" was coined.

1947 Ilford announced their second camera, the sophisticated Witness, but it was slow to reach the market for various reasons. Manufacture was later taken over by Peto Scott Electrical Instruments.

1948 Ilford launched its first Colour Film "D" 10 ASA. The Borough of Ilford presented Princess Elizabeth with a specially commissioned Ilford Advocate Camera, costing £340. The camera was stolen, but later recovered, when it was sent to be repaired.

1952 Ilford and Geigy set up Gyl Chemicals to manufacture Hydroquinone.

1953 The Ilford Witness camera finally reached the mass market, but only some 350 were ever produced. It failed against competition from the newly released Leica M3 and its own mass production problems.

1957 Ilford Sportsman camera range introduced. Ilford announced an extension to their 1953 'prints from transparencies' service to include making duplicates and prints from any make of colour transparency from 35mm film and smaller. The Basildon factory, which was built by the company, was completed and became the factory for processing Ilford's colour films. Other activities eventually (by 1964) included the making of colour prints, colour printing from transparencies and the manufacture of chemicals and equipment.

For a short period during the 1950s, ICI marketed a negative-positive colour film for use by professional photographers. At this time ICI took some preliminary steps towards entering the amateur market.

1958 ICI acquired 32% of Ilford's shares and an agreement was concluded which gave Ilford access to ICI's colour film research in the negative-positive field and provided for further research on colour photographic products and processes to be undertaken by ICI on behalf of Ilford.

The new Ilford office block was completed. A large paper finishing and distribution department was built at Mobberley. The whole paper manufacturing process was now at Mobberley and there was a large increase in the workforce.

1959 A modified cardboard transparency mount was introduced - it carried the date of processing, frame number and a black spot to aid correct orientation when placed in a slide projector.

1963 Ilford made pre-packed chemicals and technical assistance generally available to all commercial photo-finishers, and by 1964 a number of independent finishers were processing Ilfocolor roll films.

1964 Ilford had a number of wholly-owned subsidiaries in the UK (including Britannia Works Co Ltd, whose main business was wholesale black and white photo' finishing and the manufacturer of chemicals, including 'hypo') as well as 50% interests in some other companies (including Butlins Photographic Services, which operated photographic services at seven holiday camps, two hotels and a beach outlet). It had subsidiaries in Australia, Denmark, France, India and the USA, and a world-wide distribution organisation. The company had a board of ten directors, two of whom were ICI nominees. Administration and sales were directed from the company's offices at Ilford, Essex, and the company had factories at Ilford, Brentwood, Basildon and Mobberley. The supply and processing of colour films accounted for about 4% of Ilford's total trading turnover. Other activities included the manufacture of emulsions used by nuclear physicists, document copying equipment, black and white films of all types, X-ray films, photographic papers, chemicals, magnetic materials and the supply of cameras and other equipment. Ilford had some 22,000 authorised dealers, including branches of multiples, and some 2,000 dealers' agents.

1965 A new 'sunburst' symbol was introduced, the first company identification since the 'paddle steamer'. Also, a new style packaging was adopted using a dead-white glazed cardboard for all cartons and boxes. In May, Ilford introduced a new negative 35mm 20 exposure film, Colorprint, at a price inclusive of processing. At the same time, it discontinued production of Ilfocolor. The service whereby 35mm users received projection printed 'contact' prints and card mounted negatives with their returned processed film, continued, as it had previously with Ilfocolor 35mm. Super Colorslide and Colorprint were also introduced in 'Rapid' cassettes.

1966 Ciba and ICI acquired all outstanding shares of Ilford.

1968 All colour processing was now carried out at the company's modern laboratories at Basildon, Essex.

1969 Ciba acquired all of ICI's shares in Ilford, becoming sole owner of Ilford Limited, six years after their initial approach. Introduction of Cibrachrome colour reversal printing paper and chemistry, a product developed by Ciba Geigy Photochemie of Switzerland. Over the following years it was further developed by Ciba and Ilford into a world renowned 'industry standard' product for high permanence richly saturated prints from transparencies. At the end of December, Ilford ceased supply of the Ilfomatic 126 cameras and camera outfits, ending the sale of all Ilford's amateur camera products. The Mobberley workforce had grown to around 550.

1972 As part of the rationalization under CIBA ownership, the Zonal and Britannia Works were sold[6]

1975 The Queen's Award for Industry presented to Ilford for the 2nd time.

1976 The Ilford site in Ilford, Essex, was closed in February, and activities transferred to the Basildon site.

1977 New HQ was formally opened on an industrial estate in Basildon, at Christopher Martin Road.

1978 Following the rationalisation of products and facilities by Ciba-Geigy, Ilford became responsible for marketing their Photographic Group worldwide.

1982 Lumière, who were acquired by Ciba-Geigy in 1962, eventually relinquished their Corporate name and became known as Ilford France.

1983 During 1981-83, restructuring of the company occured resulting in the closure of the Basildon, Essex site and dramatic growth of the Mobberley site. The workforce trebled to 1500.

1996 In April, Ilford announced it was moving its administration from London to Mobberley, though technical services, sales and marketing remained in London. Also, the trade counter remained at Tottenham Street, London.

1997 Ilford was sold to venture capitalists Doughty Hanson for £85 million.

2005 The company was taken over by the Japanese firm Oji Paper.

1959 ICI took a 32% interest and effective control of the company. Seven years later ICI and CffiA took the remaining shares, ICI selling its portion to CIBA in 1969. llford then became an overseas Group of CIBA, and (from 1970) of CffiA-Geigy.