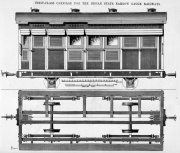 A network of broad and narrow gauge lines in India established or acquired by the Government of India.

1868 The Calcutta and South-Eastern Railway was placed under the control of the Indian Government.

1869 The proposed railway extension in Punjab north of Lahore was accepted as a Government undertaking; once constructed this became the Punjab Northern State Railway.

Several State railway projects were then started in various parts of India and Burma.

Extensions planned by the Bombay, Baroda and Central India Railway were not offered Government guarantee.

1869 Orders were given for the Rajputana Railway line, and for the Indus Valley Railway,

1871 The narrow gauge Holkar Railway was given approval, with some local financing. Decisions on other lines, such as the Wardah Valley Coal Railway and the Nisam's Railway, were held up by discussions on choice of gauge.

1872 Acquired the Azimganj-Nalhati line as the Nalhati State Railway.

1873 Work started on the Neemuch Railway. A preferred route was chosen for the Sindia Railway. The Northern Bengal Railway was pushed forward with priority because of the prospect of failure of the rains.

1874 The Tirhoot Railway was laid with speed in order to ship grain.

1874 A Director of State Railways was appointed as part of the Government of India, separate from the Public Works Department, except for:

which remained under local control, subject to oversight by the PWD.

1874 Construction started on the Rangoon and Irrawaddy Valley Railway to give work to the starving people.

1877 The Dhond and Manmad Railway was completed, between 2 arms of the Great Indian Peninsular Railway

1878 Construction started on various light railways in the North West States. Initial parts of the Western Rajputana Railway were opened. Orders were issued for the Nagpur and Chattisgarh Railway as a provincial line.

1879 The Patna-Gya Railway was opened; this was designed as a broad gauge line so as to be able to connect with the East Indian Railway

1879 Administrative changes were made to put the various railways under the control of a few Consulting Engineers.

1879 Construction started on the Kandahar Railway, the Kathiawar Railway and the Mysore Railway

1885 The Secretary of State for India purchased the Scinde, Punjab and Delhi Railway

By the end of 1885, the annual administrative report listed 7500 miles of broad gauge lines and 4500 miles of narrow gauges lines (these included some lines not yet taken into state ownership).

1888 The Government of India took over the Oudh and Rohilkhand Railway making it a state railway.

1888 The Nagpur Chhattisgarh Railway was transferred to state ownership to be operated by the Bengal-Nagpur Railway and was converted to broad gauge.

1905 December 31st: Ownership of the Bombay, Baroda and Central India Railway passed to the Government of India and a new company was formed to manage it under a contract agreed in 1907 and revised in 1913.

1951 The Indian Railways were created with 17 zones