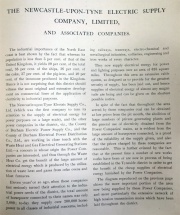 1889 The Newcastle-upon-Tyne Electric Supply Company was founded in Newcastle upon Tyne by John Theodore Merz and Robert Spence Watson (who had married the sister of Merz's wife), supplying the area on the east side of the City.

From 1898 Charles Merz undertook much of the company's design work.

1900 the Newcastle-upon-Tyne Electric Supply Co. purchased the entire power plant put down by the Walker and Wallsend Union Gas Co., with the exception of the cables and sub-station machinery installed for the purpose of supplying the works in the area in which the Gas Co. had obtained Parliamentary powers. The Supply Co. further entered into an agreement with the Gas Co., in which the latter undertook to buy electricity in bulk from tire former.

The company also obtained powers to lay high-tension cables from the power station at Wallsend to various sub-stations in Newcastle, and decided to change their entire system of supply, from single- phase alternating current, generated at Pandon Dene Power-Station at 2,000 volts, with house-to-house transformers. The new scheme included the generation of three-phase current at 5,500 volts, 40 cycles per second, transformed to direct current using motor generators in sub-stations.

1901 Opened the Neptune Bank Power Station, the first power station in the UK to generate three-phase electricity, and the first to supply electricity for industrial purposes rather than just lighting.

1903 Carville Power Station was opened to supply power for the electrified railways in the Newcastle area.

1905 Took over the Walker and Wallsend Union Gas Co

1910 Opened Dunston Power Station to supply the area south of the River Tyne.

Merz recognized that in Britain, with industries concentrated in certain areas, public electricity supply could be cheaper and more reliable than private electricity supplies. To capture this market Merz conceived the idea of interconnecting several power stations by high voltage. However, this needed to be protected against faults causing major system damage. His solution, with Bernard Price, was the invention of balanced protection. This enabled Merz to develop a new transmission system for the company to supply electricity cheaper than any other British undertaking.

Took over the assets of the Durham Collieries Electric Power Company and the Hexham and District Supply Company following their liquidation.

1926 R. P. Sloan was chairman and managing director of the company. Mr H. A. Couves was appointed general manager of that company and the associated companies of interest listed below.[3]

1932 Absorbed eight other companies including[4]: