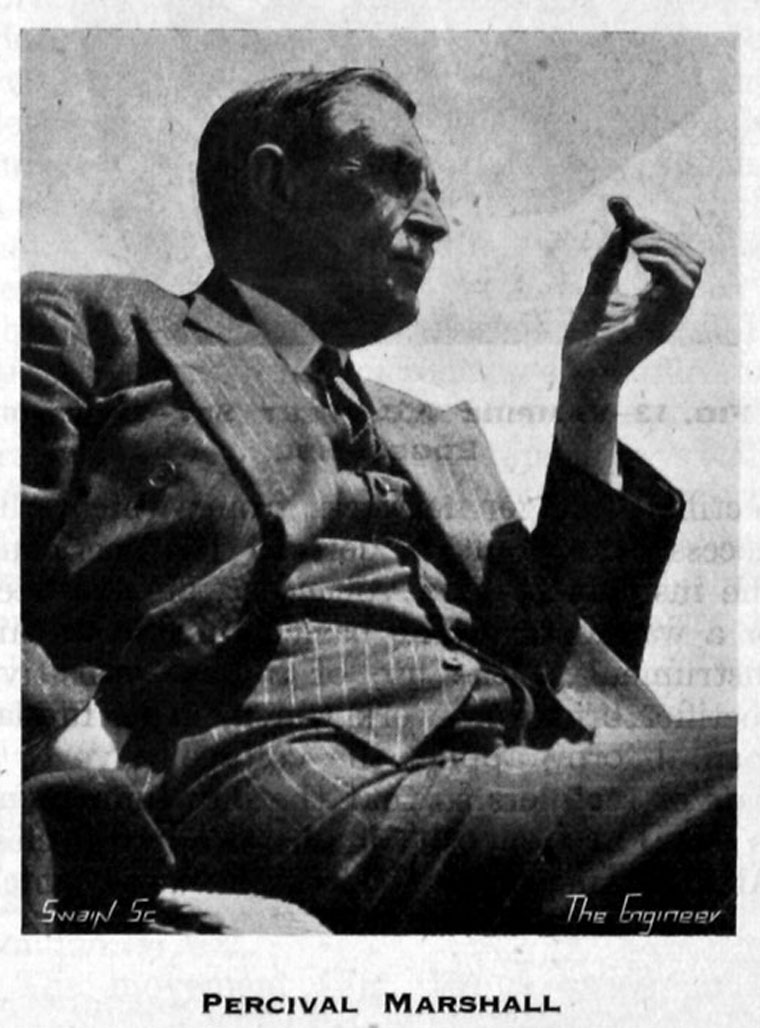 1892-4 Assisted in the management of A. W. Marshall and Co, electrical engineers

1894 Sub-editor of The Handwareman magazine.

Editor of The Photographic Dealer and Optical and Scientific Apparatus Trade Journal.

"To a host of engineers and model makers, Percival Marshall was well known either personally or through the medium of The Model Engineer, which he founded just over fifty years ago, and all will learn with deep regret of his death, which occurred on April 10th. In the last half-century, he had contributed much to the work of technical journalism, and by his encouragement and enthusiasm he contributed even more to the art and science of model making.

Percival Marshall was born in London on December 31, 1870, and it has been said that he was first induced to take an interest in engineering by winning, when he was fourteen, a Mitchell Scholarship at the Finsbury Technical College. The annual value of the scholarship was £30, and Marshall spent two years in the Mechanical Engineering Department at Finsbury under Professor Perry, taking the College Diploma on the completion of his course. He also took courses of study at the Birkbeck Institute, the Manchester Technical School, and at Owens College Manchester, and subsequently gained practical experience in the shops of various firms, including R. Hoe and Co., Ltd., W. H. Allen, Sons and Co., Ltd., and Alfred Herbert, Ltd.

At the age of nineteen Marshall was earning journeyman's wages as a turner, and then he entered the drawing office of R. Furnival and Co., Ltd., of Redditch (sic). A year later, however, he returned to London to join his brother Alfred - better known perhaps as " A. W." - in the manufacture of dynamos, motors and arc lamps. But soon afterwards, in his desire to add to his practical experience, Percival decided to go to the north of France, where, for several months, he worked as a lathe hand in the shops of Messrs. Hermet and Miquet... Read more

"PERCIVAL MARSHALL, whose death occurred on 10th April 1948, was well known in engineering circles and to an even' larger section of the general public as the editor of "The Model Engineer", which he founded fifty years ago. During this long period he made important contributions to technical journalism and, moreover, by his enthusiasm did much to foster the art and science of model making.

He was born in London in 1870 and at the age of fourteen won a Mitchell scholarship at the Finsbury Technical College, where he spent two years in the mechanical engineering department under Professor Perry and obtained the College Diploma.

He continued his technical education at the Birkbeck Institute, the Manchester Municipal College of Technology, and at Owens College, Manchester, and subsequently gained practical experience in the shops of various firms, including Messrs. R. Hoe and Company, Ltd., Messrs. W. H. Allen, Sons and Company, Ltd., of Bedford, and Messrs. Alfred Herbert, Ltd., of Coventry.

After a period in the drawing office of Messrs. R. Furnival and Company, Ltd., of Redditch (sic), he returned to London to assist his brother in the manufacture of dynamos, motors, and arc lamps. But soon afterwards he went to France in order to obtain further practical experience and for some months was employed as a lathe hand in the works of Messrs. Hermet and Miquet. On his return to this country his thoughts turned towards journalism and he accepted an appointment as sub-editor of "The Hardwareman", one of the publications of his uncle, Sir Horace Marshall's firm. Later he became editor of "The Photographic News", and in 1898 published the first issue of "The Model Engineer". Since then his firm has produced numerous books on engineering and subjects connected with the workshop, which have proved their value to model makers and to those concerned with small engineering works. Other technical publications, which owed their inception to him, were "The Woodworker", "The Fine Art Trade Journal", "Experimental Wireless", and "The Engineer in-Charge" (now "The Power Engineer").

He was the founder, in 1898, of the Society of Model and Experimental Engineers, an event which led nine years later to the holding of the first Model Engineer Exhibition, now of annual occurrence. In addition to all these activities Mr. Marshall took a leading part in the creation of the British Association of Trade and Technical Journals, which was afterwards amalgamated with the Periodical, Trade Press and Weekly Newspaper Proprietors' Association. He was executive chairman of this latter body from 1928 to 1943 and was then elected vice-president. He was also keenly interested in the work of the Junior Institution of Engineers and from 1900 to 1902 held office as Chairman of the Council. Mr. Marshall had been a member of the Institution for half a century, having been elected an Associate in 1898 and transferred to Companion ship in 1922."