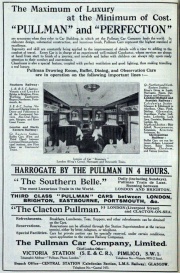 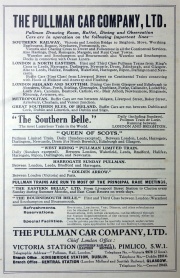 1876 The idea of the Pullman car was introduced to the UK by the Midland Railway, with a specially chartered train taking a party of people on a tour of England and Scotland. The Midland railway imported 37 Pullman cars and erected them at their Derby Works. They ran them on contract until 1888.

1881 The London, Brighton and South Coast Railway enthusiastically embraced the luxury Pullman concept, with its first complete train of Pullman carriages in 1881. Other railway companies also experimented with Pullman services, but gradually developed their own improved rolling stock and ceased their contracts with Pullman.

1892 The Pullman Company Ltd was formed in Britain based on the Pullman concept of luxury rail travel in the United States and established under US licence and control.

By 1930s Pullman had become synonymous with luxury rail travel.

1933 The Pullman cars that run on various trains of the London Midland and Scottish Railway in Scotland were, as from December 1st, transferred, with the staff of attendants, from the Pullman Car Company to the L.M.S. Company[1]

Post-WWII Services revived; they were taken over by the newly nationalised British Railways.

1950s The Pullman Car Company itself was experiencing business difficulties and much of the rolling stock was out of date.

New Pullman carriages were developed for the mainline routes and diesel multiple units (known as the Blue Pullmans) were designed for the Midland and Western main lines.

1960s The last Pullman cars were made by the British Rail works at Derby. Preston Park operated primarily as a maintenance and repair shop.

1967 the separate Pullman Division of British Rail was broken up and operations transferred to the various Regions.

1970s The multiple units began to be withdrawn but other locomotive=hauled services continued until the 1990s.