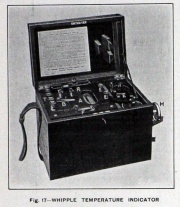 Robert Stewart Whipple (1871-1952) M.I.E.E., F.Inst.P., M.D. of the Cambridge Instrument Co, a specialist in the measurement of temperature. He was awarded the Hawksley Medal, I.Mech.E. and the Ayrton Premium by the Inst. Elec. Engrs.

1908-13 Member of the Council of the Physical Society.

1914-16 Vice-President of the Physical Society

1920-1 President of the Optical Society.

IT is with regret that we have to record the death of Mr. Robert Stewart Whipple at his home in Highgate on Sunday last, December 13th.

Mr. Whipple was born in August, 1871, and following his education at King's College School he entered Kew Observatory as an assistant in 1888.

He left the observatory in 1896 to enter the employment of the well-known instrument manufacturer, L. P. Casella, as assistant manager.

Two years later he was appointed manager and secretary to the Cambridge Instrument Company, and Mr. Whipple retained his connection with this firm until 1949. He became joint managing director in 1909 and retained that office until he retired in 1935 after which he served as chairman of the directors for a number of years.

Throughout his long career Mr. Whipple took a very keen interest in the history and development of scientific instruments and he assembled a noteworthy collection of specimens and documents of historical importance.

In 1944 he presented this collection to the University of Cambridge, where it formed the nucleus of the Whipple Museum of the History of Science, which was opened two years ago.

During his service with the instrument industry Mr. Whipple was twice elected president of the Scientific Instrument Manufacturers' Association.

He served on the board of the Institute of Physics for some twenty-one years, and, in addition to holding the office of president of the Optical Society in 1920-21, he was treasurer of the Physical Society for ten years and vice-president for three years.

At the British Association meeting in Dundee in 1939 Mr. Whipple was president of Section A, and he was Faraday lecturer to the Institution of Electrical Engineers in 1936-37.

From this brief summary of some of his many activities it will be appreciated that throughout his working life Mr. Whipple was an active and important member of the instrument making industry. By his death both the industry and the many learned societies in which he was interested have lost a noteworthy historian as well as a respected and valued member.