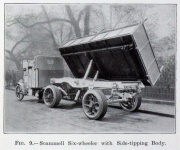 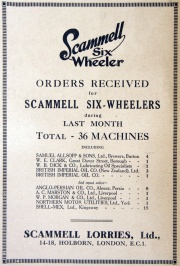 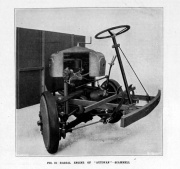 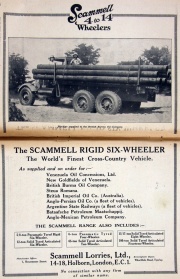 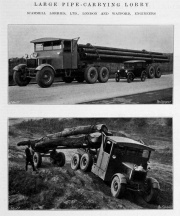 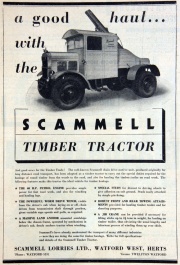 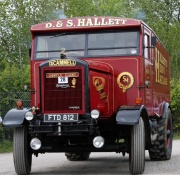 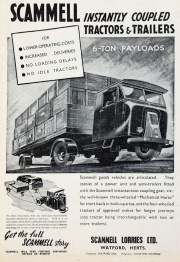 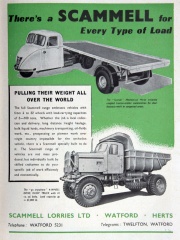 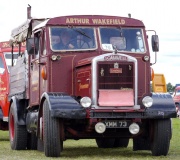 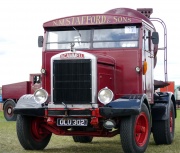 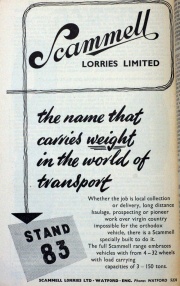 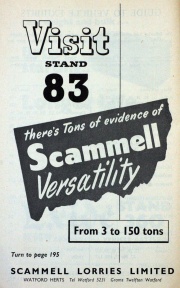 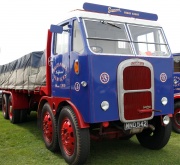 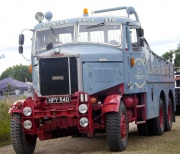 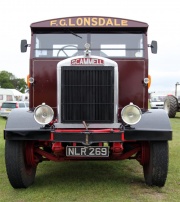 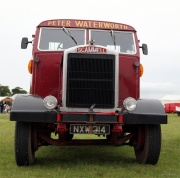 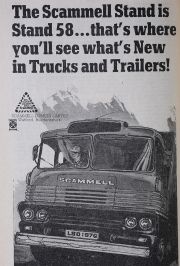 Scammell Lorries Ltd of Tolpits Lane, West Watford was a manufacturer of commercial vehicles from 1922 to 1955.

1922 1st July. Scammell Lorries Ltd was formed as a public company with capital of £250,000 to acquire from G. Scammell and Nephew Ltd their works at Watford and to carry on the business of manufacturers of motor lorries for road haulage, etc, especially the "well known" Scammell Six-wheeler. Directors were James Allan as Chairman, Alfred George Scammell as MD, Percy Garibaldi Hugh as Technical Director and General Manager, Albert Isaac Belisha, Henry Ludwig Mond and Edward Whitten Rudd [1]

They moved to a factory at Tolpits lane, Watford and built a new factory for the construction of the new Articulated Six-wheeler.

1926 Produced the Pioneer six-wheeled tractor unit. This 6x4 rigid had a walking-beam bogie and a centrally pivoted front axle allowing any of its six wheels to be raised two feet without the bogie losing traction. The Pioneer’s mobility could be further enhanced by adding a driven front axle.

1928 Major Renwick was appointed to the board having purchased a substantial shareholding; his company, Fisher and Renwick London Manchester Steamers Ltd, had been one of the first to use Scammell lorries in 1920 and the fleet was still running satisfactorily[2]

1929 Scammell introduced the world's largest lorry, the articulated “Hundred-Tonner” heavy haulage vehicle. Only two of these revolutionary lorries, designed by Oliver North, were ever made. The first was supplied to Marston Road Services.

1933 Scammell bought a 3-wheel tractor design from Napier and launched it as the Mechanical Horse. Oliver North developed a new automatic coupling which enabled the tractor and trailer to turn in less than their own length. Over 20,000 of these 3-ton and 6-ton tractors and their successors were built.

The Articulated Six-wheeler and the Articulated Eight-wheeler were developed into the ‘Lightweight’ range with Gardner 6LW and North’s famous 6-speed gearbox.

1934 Scammell were in a poor financial position. Watford Council had helped out by ordering a pair of fire engines and Shell-Mex injected capital but imposed a management change that deprived Col Scammell of his post.

1937 The Rigid 6 was joined by a new forward-control ‘Rigid Eight-wheeler’, the first of a long line of Scammell Eights.

1941 Introduced their ultra-light pumping unit powered by a 3 bhp single-cylinder air-cooled four-cycle engine intended initially for military use but later made generally available. [3]

The first new post-war product was the famous ‘Showtrac’ and 18 were built.

1949 The 4x4 Mountaineer was introduced for civilian use. Most had a tipper body fitted for off road construction duties.

1950 The 6x6 Explorer with a Meadows petrol engine replaced the recovery version of the Pioneer.

In the mid 1950s the Super Constructor - forerunner of today's cross-country heavies - with Rolls-Royce C6 turbocharged engine and semi-automatic gearbox was introduced.

1955 Scammell became part of Leyland Motors and this provided them with Leyland engines, gearboxes and axles and was followed by the gradual replacement for the ‘Lightweight’ range by new models using Leyland engines. These were the bonneted 4x2 Highwayman motive unit, the forward control Routeman 8-wheeler and a new 4x2 forward control motive unit, the Handyman. This, and the Highwayman, could be configured as heavy haulage tractors for operation up to 50 tons or more, and were complemented by the full range of Scammell trailers made at the Moor Park works.

A new dumptruck range, comprising the 4x2 Sherpa and 6x4 Himalayan was launched.

1961 Manufacturers of commercial vehicles and the Scammell "Mechanical Horse". [6]

The start of the 1960s was marked by the introduction of the new Michelotti-designed glass fibre reinforced plastic cab for the Routeman, Handyman and the new twin-steer 6x2 Trunker tractor which took advantage of the increased legal weights available when coupled to long front-overhang bogie semi-trailers.

1964 The 6x4 Contractor high-power prime-mover with its Cummins 335 engine, Lipe clutch and Fuller gearbox went into production with a choice of Leyland 24 ton or Scammell 30 and 40 ton bogies which were to feature on all the future Scammell ‘heavies’. This was intended initially to compete in American-dominated territories overseas. It had a coachbuilt cab and a semi-automatic gearbox. The Contractor also became popular in the UK for 240+ ton GTW operation.

1969 The 6x4 Crusader was announced as a high-power, high-speed motive unit with steel cab. Many hundreds of a military version with the Rolls-Royce 305 engine were supplied to MoD as plant tractors and recovery vehicles.

1969 Thornycroft's Basingstoke factory was closed and specialist vehicles transferred to Scammell at Watford.

Pressure from UK hauliers, especially BRS who placed the first orders, soon resulted in development of 4x2 versions for premium operation, and so popular did these tractors with their Rolls-Royce 220 and 280 engines become that production was transferred to Guy Motors at Wolverhampton.

1972 Thornycroft had transfered their ‘Nubian’ range of 6x6 airfield crash tenders to Scammell, together with the LD55 6x4 dumptruck.

All these new vehicles were in production in parallel with the consolidated ‘A’ range comprising the Handyman 4, Trunker 3 and double-drive Routeman 3, all of which were now available with a range of engines and transmissions to compete with the powerful foreign trucks which were becoming available to British hauliers.

A surge of development in the late 1970s commenced with the Contractor Mk 2 heavy hauler with its 18 litre 425 hp Cummins KT450 engine and Allison automatic gearbox, and the build of the first Commander Tank Transporter for the British Army. This 100 ton+ GTW tractor, fitted with the Rolls Royce CV12TCE 26 litre, 48 valve dual-turbocharged 625 hp intercooled V12 diesel engine, semi-automatic gearbox and Scammell 40 ton bogie was required to have the same acceleration and braking performance as a contemporary 32 tonner! New braking, cab, bonnet and winching systems were devised, and the fleet entered service in 1983, having been built at the newly-opened moving line construction shop which at last gave Scammell a modern state-of-the-art factory.

The ex-Thornycroft Nubian range was replaced by a new range of 4x4 and 6x6 rear-engine airfield crash tenders with engine powers up to 540 hp. To complement their automatic transmission, Scammell devised a family of high-power PTO systems to enable the foam discharge system to be operated at constant speed whilst also driving the vehicle.

The last new version of the Contractor was built in large quantities, including a 6x6 for heavy recovery in the Middle East.

1987 The Watford factory was closed with the takeover of Leyland by DAF.

Upon closure in July 1988 the S24 and the Nubian ranges, together with rights to the Crusader and Commander, were bought by Unipower who opened a new plant in West Watford.

List by Units lists the known existing Scammell units still in existence. The list is continually being added to.