Grace's Guide is the leading source of historical information on industry and manufacturing in Britain. This web publication contains 138,073 pages of information and 222,854 images on early companies, their products and the people who designed and built them. 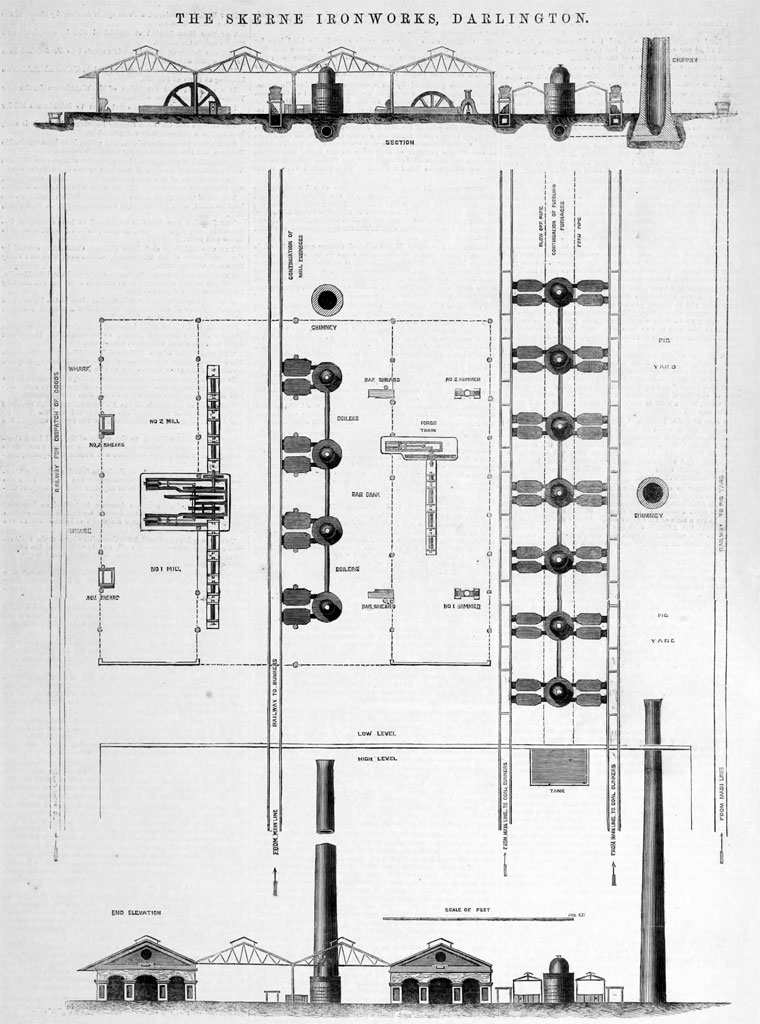 Its foundation has been represented as 'the reaction of the Quakers of the town (Darlington) to the invasion of their territory by William Barningham....' The firm was indeed engaged in iron-rolling but had a range of products distinct from those of Barningham and was not in direct rivalry. The Skerne company built its reputation upon plates for ships, boilers, and particularly bridge building, and at its peak employed 1,000 workers.

1863 Hutchinson designed and built the plant on the Albert Hill side of the North Eastern Railway, bounded to the north by the river Skerne, on a plot of 22 acres which had been bought from R. H. Allan in 1863. When the works opened in 1864 there were 40 puddling and heating furnaces, producing 240 tons of plates each week. Within four years production had increased to 350 tons a week. Three railway lines led into the works, two carrying coal, the third from the pig yard. Two lines took away ash and rubbish, and finished products. The plant was still seen as relatively small of its type, so that internal haulage was done by horses, considered more economic than steam power.

The death of Walter Pease led to a reorganisation of the business in 1872. A limited company, the Skerne Iron Works Co. Ltd, was established with £200,000 capital in £10 shares, to take over the stock and goodwill of Pease, Hutchinson and Co and carry on the manufacture of plates, bridges and girders. Edward Hutchinson's continuing involvement, as joint managing director with R. L. Pratt, was emphasised to prospective investors. The old company was described as a 'remarkable success' which had earned large profits. It was anticipated that plate production would increase to between 22,000 and 23,000 tons per annum , and that an expected net income of more than £30,000 would yield a return of over 15%. The expansion plans were based on an increasing expertise in bridge-building: the Skerne company had constructed the Kistna Viaduct, 3,852 feet long, for the Great Indian Peninsula Railway in 1870-1, and in 1872 was building a swing bridge for Leith docks.

By the end of the 1870s bridges from the Skerne works had been exported around the world: to Spain (Montesa Railway bridge, Boquilla bridge); to Sweden (River Dal and other railway bridges); bridges for the state railways of Denmark; a swing bridge in Dublin; the Murrumbigee swing road bridge built under the supervision of the civil engineer John Fowler in Australia. Hutchinson published a paper in the Institution of Mechanical Engineers' Proceedings about the River Dal project, for which he had devised a cantilever scheme which came to be adapted for long-span bridges around the world.

All the wrought-iron bridges on the York and Doncaster section of the North Eastern Railway were constructed at the Skerne Works, along with viaducts on the Whitby, Redcar and Middlesbrough Union Railway, a footbridge over the Tees at Barnard Castle, a swing bridge crossing the Ouse at York, and Llandudno Pier. But despite the healthy level of orders and its high expertise and reputation, the business foundered in the middle of that decade. The cause of the problems appears to have been the over-ambitious take-over of the Britannia Works, between Middlesbrough and Newport, which offered an increase in capacity and direct shipping facilities. The Darlington works at the time produced 900 to 1,000 tons of finished plates and angles each week, and made up to 4,000 tons of girders per annum, while the Middlesbrough site had a weekly output of nearly 2,000 tons of finished iron.

Financial problems caused the closure of the Skerne works in 1875, bringing severe hardship to Albert Hill.

The company's fortunes may also have been affected by Edward Hutchinson's ill-health. When his paper was published in 1876 he was living in Bournemouth. Although he returned to Darlington by the time a later article, 'On improvements in machinery for rolling iron and steel plates', appeared in 1880, he was too ill to read it to the Institution in person. Jeremiah Head, who delivered it on his behalf, described Hutchinson as 'well known in the North of England as a very ingenious and sound mechanic, and of great experience in rolling mill machinery'. Hutchinson dropped out of the Institution shortly afterwards.

An attempt to rescue the business with the foundation of the Skerne Iron Bridge Work Company Ltd in 1876 brought a temporary revival. Contracts during this period included a swing bridge over the Liffey in Dublin - Butt Bridge (1879), Dublin.

The machinery was sold in May 1889 and the site passed into a number of uses. It accommodated the Skerne Steel Wire Co in 1893, and John F. Wake for a time, before eventually being taken over by the Darlington Wire Mills founded in 1904, which made house frames and other steel fabrications at the Skerne Works.