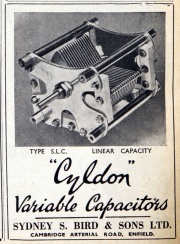 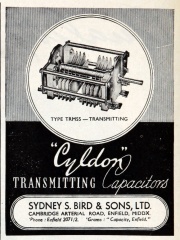 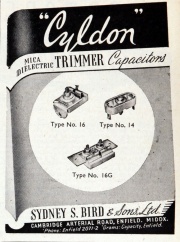 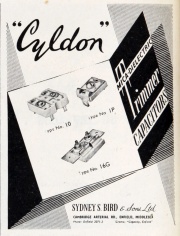 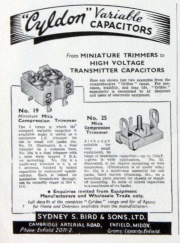 Sydney S. Bird was an entrepreneur who developed businesses in several different areas. It is not clear how the different entreprises were related to each other but the public company, Sydney S. Bird and Sons, seems to have concentrated on electronics and related products. There are several indications that toys, model steam engines, and model sewing machines were also made in the factory in Poole but reports in "The Times" about the public company do not mention these, so perhaps they were organised separately.

Mr Bird is believed to have had connections with John Logie Baird, inventor of television, and he may well have helped found the Baird television company.

1935 The company moved to a purpose-made factory in Enfield

1936 Public company incorporated. Instrument makers and maker of condensers which were supplied to the shipping, aircraft, electrical, engineering, radio and cinematograph industries[1].

The company was located in Cambridge Arterial Road, Enfield, Middlesex, next to the cooker manufacturers, Belling, and was producing walkie-talkies, capacitors and condensers. It is thought that by this time Sydney S. Bird had already taken over a company called Airspace Radio Condensers, of Tring in Hertfordshire.

WWII: Work for the war effort was similar in nature to the peacetime business

1946 Sydney S. Bird retired and was replaced as managing director by S. E. C. Bird, who had been works manager[2]

One of the major products of the Bird factory was the Turret Tuner which enabled old BBC-only TVs to be converted to receive the new independent TV channels, which did not go down too well with the manufacturers and retailers of new TVs. It was the demand for this product, and insufficient space at the Enfield site for expansion, that prompted Bird to relocate.

1953 A partly-built factory was completed in Fleets Lane, Poole. The site had formerly been occupied by Solway Morgan, who had gone bankrupt. It specialised in refurbishing army tanks, making one good one from two or three bad ones, using a gun turret from one, tracks from another, etc. By completing and adding to the building, and utilising adjacent premises, Sydney S. Bird occupied 80,000-square feet of floor space. Only 40 key personnel moved from Enfield with the company.

The new workforce was recruited from the Poole area, where, by 1957, Bird was the town's largest single employer of labour, having some 1,000 people on its staff. Bird's company offered great employment opportunities to the women in the area, and they made up 75% of the work-force.

The teletuners were despatched in their thousands each week, along with smaller radio components in similar numbers. Everything was stamped, pressed, drilled and tapped, spot welded and turned, in its own machine shops, and there was a self-contained plating department and tool room. Bird's "boffins" even built their own Wobbulator, which was a television station simulator transmitting signals, over a closed circuit, on all the proposed frequencies likely to be used, either here or abroad.

Sydney S. Bird marketed all its electrical equipment under the Cyldon trademark. This name was the suggestion of Bird's sister-in-law, and was an amalgamation of two of his son's names, Cyril and Donald. Cyril died at a fairly young age, and the company was run by Donald, and Cyril's son, also called Cyril. An elder brother, Sydney, is thought to have gone out to Australia in the early 1950s.

The Morphy-Richards company also used the name Cyldon for its door chimes (made of two long chromed tubes of unequal length). Mr Richards of Morphy-Richards had previously been the sales manager of Sydney S. Bird. On the outside of the factory, a huge "Cyldon" sign was fixed to the wall.

Bird did not appear in the electoral roll of 1959, by which time he would have been elderly and may have passed away.

Bird's was the first firm to produce the 625-line TV tuner, and also made trimmers, variable capacitors and permeability tuners. It was also famous for producing electronic organs loved by teenagers and beat groups of the time, and these were also played in churches, theatres and other places of entertainment.

1963 Acquired the major part of Astaron Electronics, that connected with contracts for the government and Marconi International Marine[5]

1965 A new amplifier range was launched plus two new organs. One was futuristic and for professionals, the other for home use. Astaron Electrics concentrated on its new radar, called Raymarc, and echo sounders which were being fitted to trawlers and ships all over the word. Secret government work was also part of its remit.

By 1966 the company had started to make car radios, and it seems likely that these were either sold as Motorola or Radiomobile. Echo sounders were now affordable, and 2,500-3,000 were being made each week.

1966 Astaron-Bird linked with John E. Dallas and Sons to expand the sales of electronic organs that Bird made[8]

1967 Launch of the Raymarc radar for Marconi[9]

1970s Astaron-Bird was taken over by the Brocks Group, well known for its alarms.

1979 In June, the fortunes of the company took a downturn. The total staff numbers were down to 600, a fall of 900 in 14 years, and in March 1980 a token walkout by 300 people against proposed redundancies was made.

1980 In June, 200 workers were finally made redundant, leaving 370, due to competition from the Far East, high-interest rates and poor foreign-exchange rates. Since the redundancies were announced, the group had diversified into video-display equipment, which projected life-like images from a TV, video cassette or camera, and could be used to promote sales of records with full-size video shows of pop stars. By October a one-day week for the machine shop had been introduced and a three-day week for assembly workers and admin staff. The American market had collapsed.

1981 On 3 March, the receivers were called in after a £3 million property deal fell through. The company was reportedly in debt to the tune of £12 million. Shares fell sharply and were suspended on the Stock market at 17p. The remaining 160 jobs were at risk, although trading was allowed to continue, but in May another 100 people were sacked to leave just a slim-line 170. In October another 64 people found themselves without a job, but rescue was at hand. Mike Sykes of Brooks (?Brocks) and Bob Spink, formerly a Brocks consultant and now of Seafarer, bought a 70% interest in the company with County Bank, the merchant banking arm of the National Westminster bank owning the remainder. The new company was to be called Seafarer Navigation International Ltd

Somewhere near the end of all this the American company, Standard Communications, bought the concern and wished it hadn't.

c.1932 At this time a licence was required to produce toys, a market which Bird wanted to enter. To save applying for the licence Bird bought out two companies that already held them - one was Prestico who manufactured children's construction kits, similar to Meccano but requiring no nuts and bolts, the components being pressed together. The second company was Morthan, as in "more than a toy", which was already producing sewing machines. Other toys included scales with weights, a cooker using small solid-fuel tablets to heat it up, and a battery-operated washing machine, which heated up enough hot water sufficient to wash a hanky. The local scrapman discovered that the metal off-cuts he collected from Morthan were just the right size and shape as those being used by the Prestico company.

Other products produced by the Bird company included cine reels up to 35mm and recording spools. All toys were sold under the "Vulcan" trade mark. Sewing machines were made all year round, and production was particularly busy during the run-up to Christmas.

Sydney S. Bird also manufactured the Vulcan sewing machine (a toy which really sewed[10]); they were made in Poole.

WWII about 100 sewing machines a week were being produced.

1956 The next range of sewing machines was designed entirely in-house, it was patented in 1956.

The Morthan company continued to make the children's sewing machines, selling many thousands in this country and abroad, and were distributed by A. L. Reese who was based in Swansea and Cardiff, Wales.