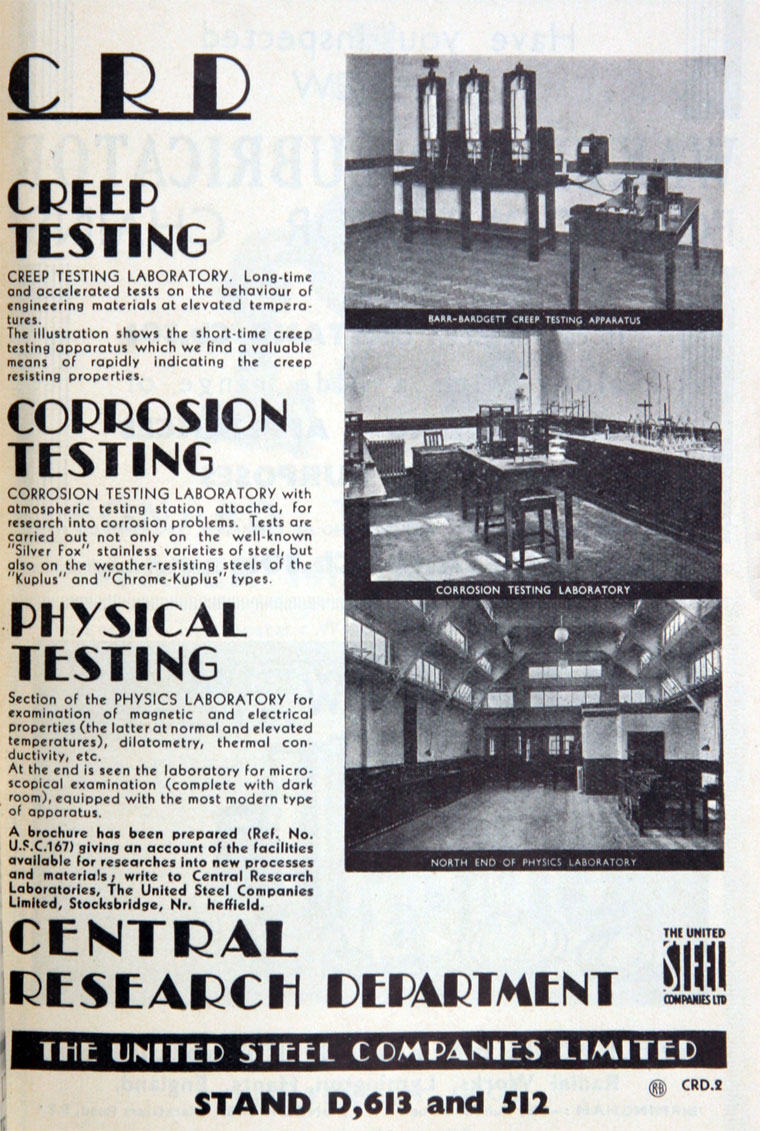 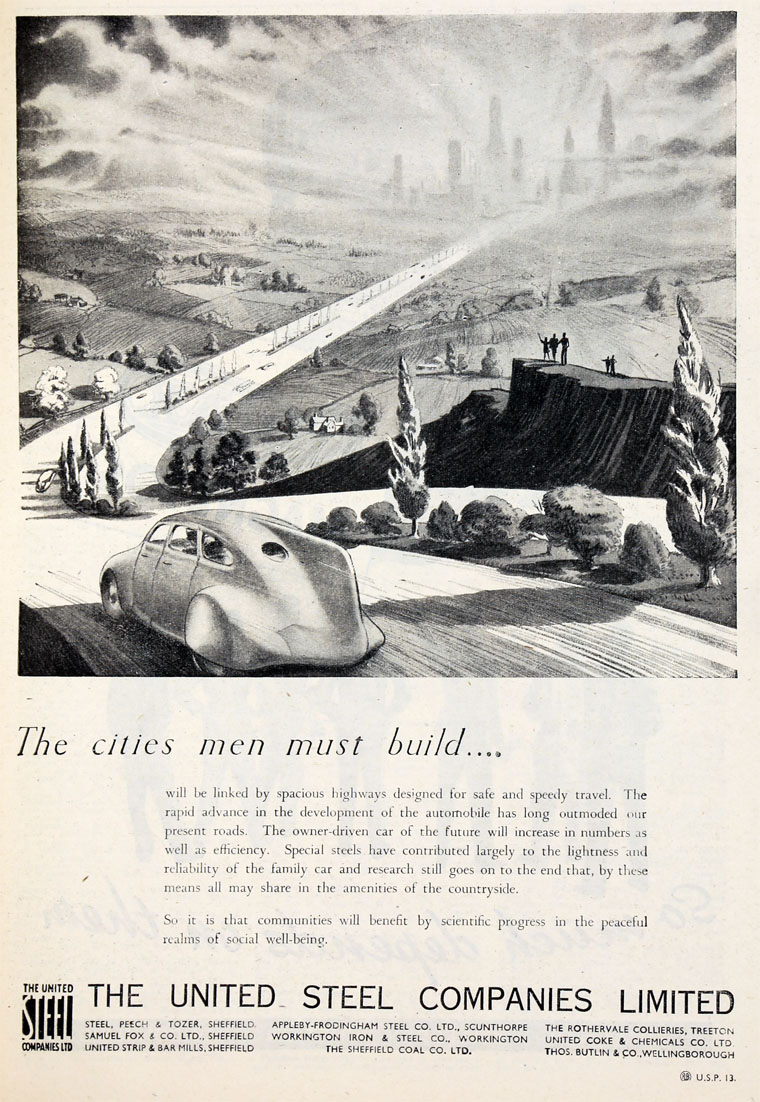 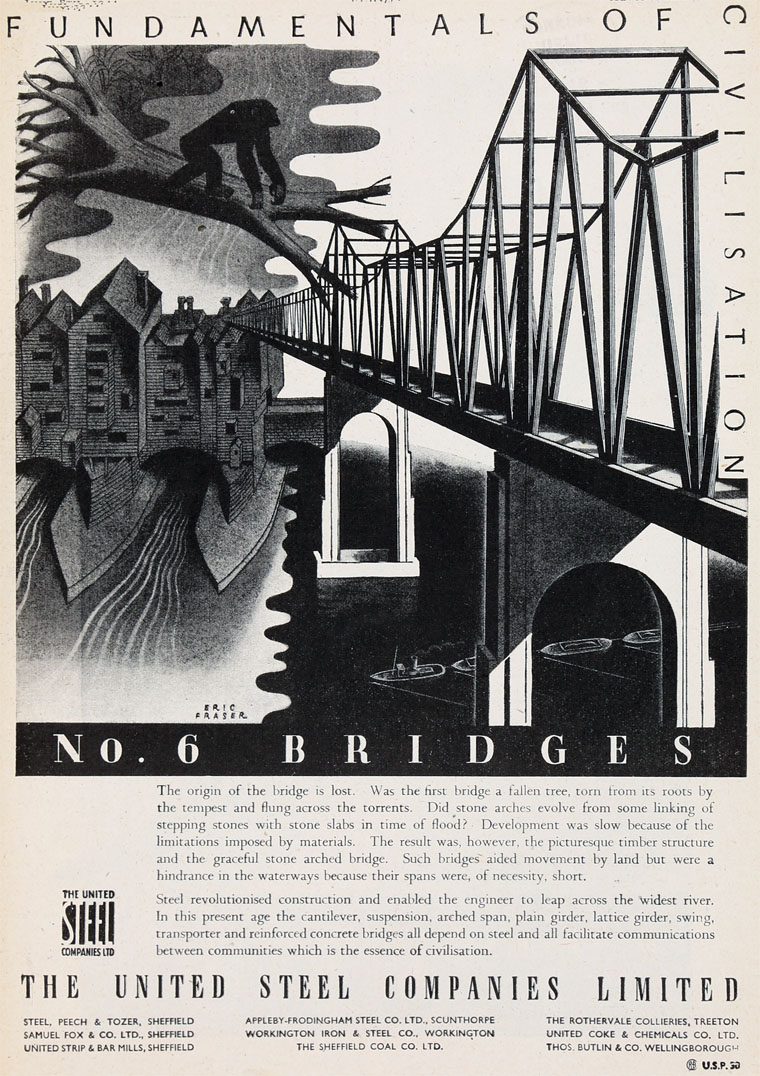 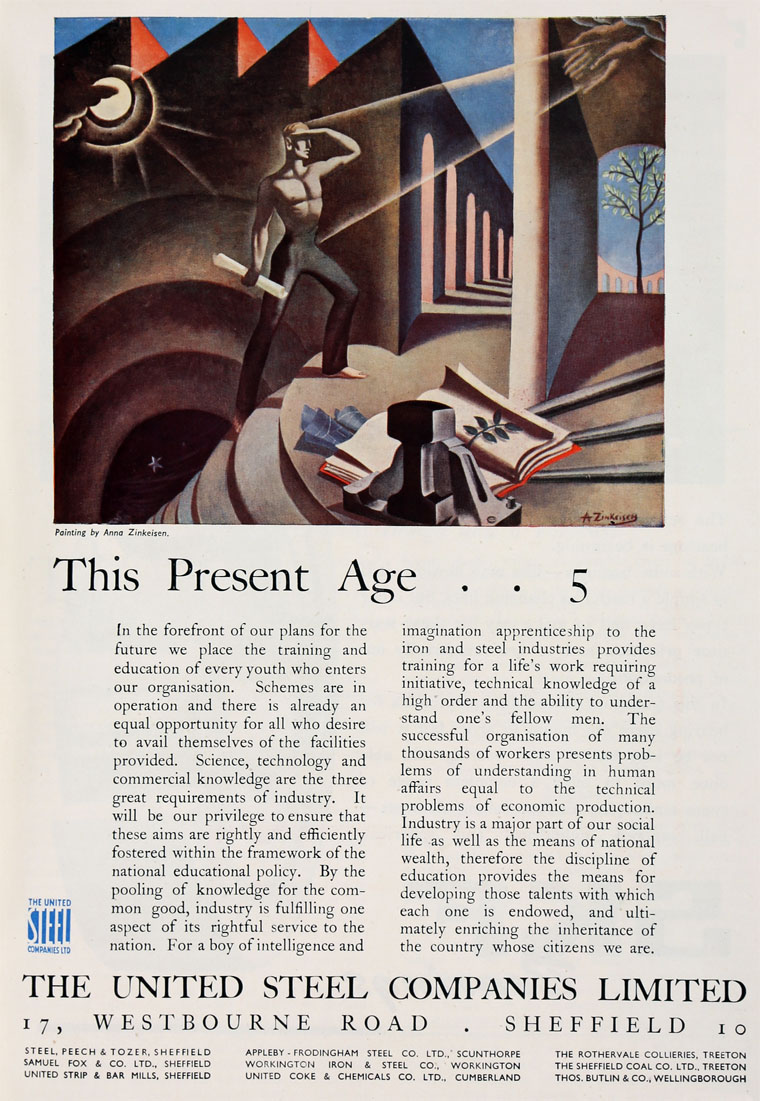 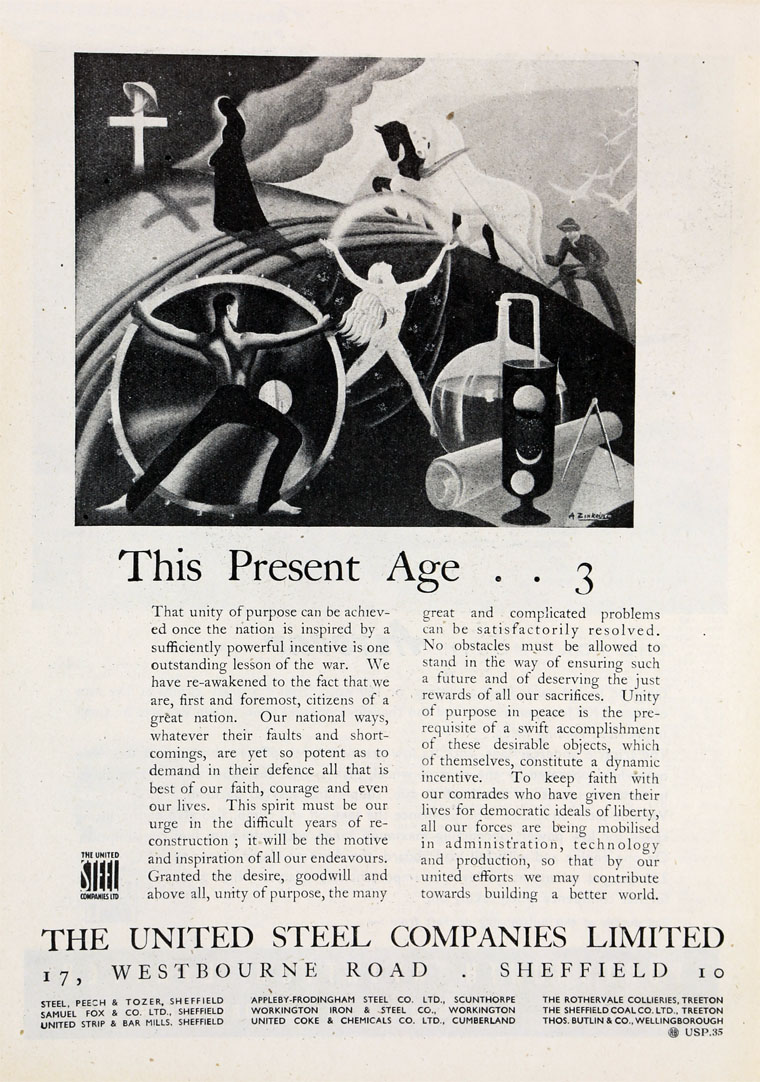 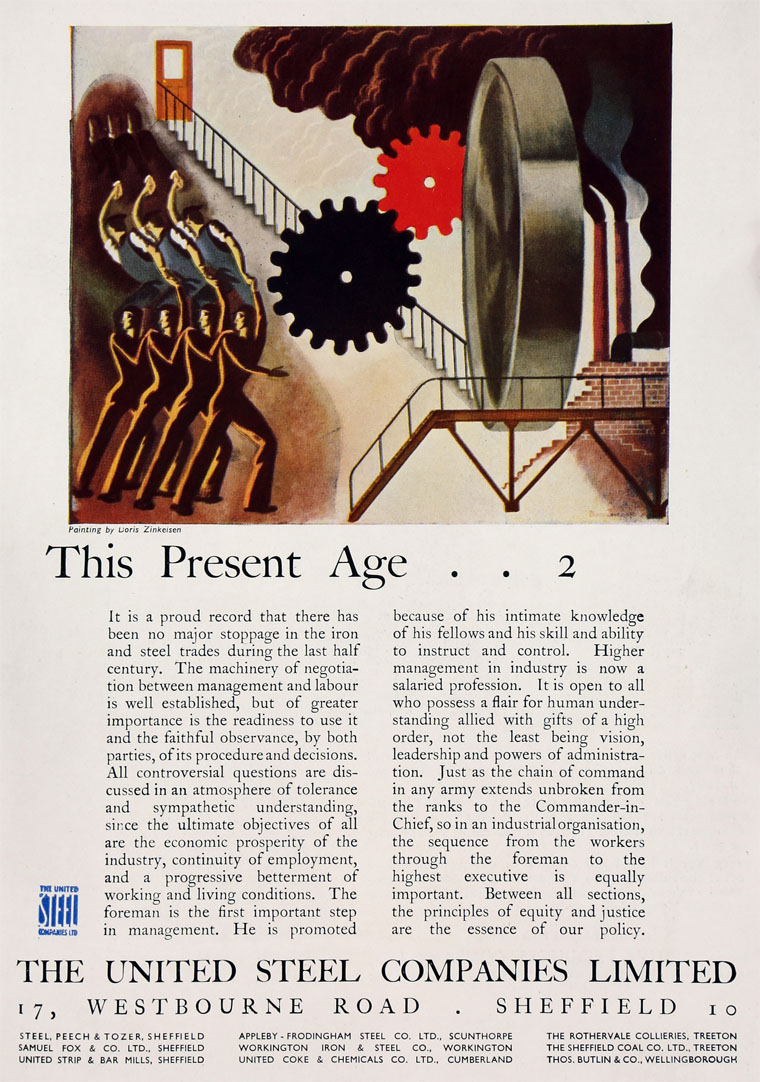 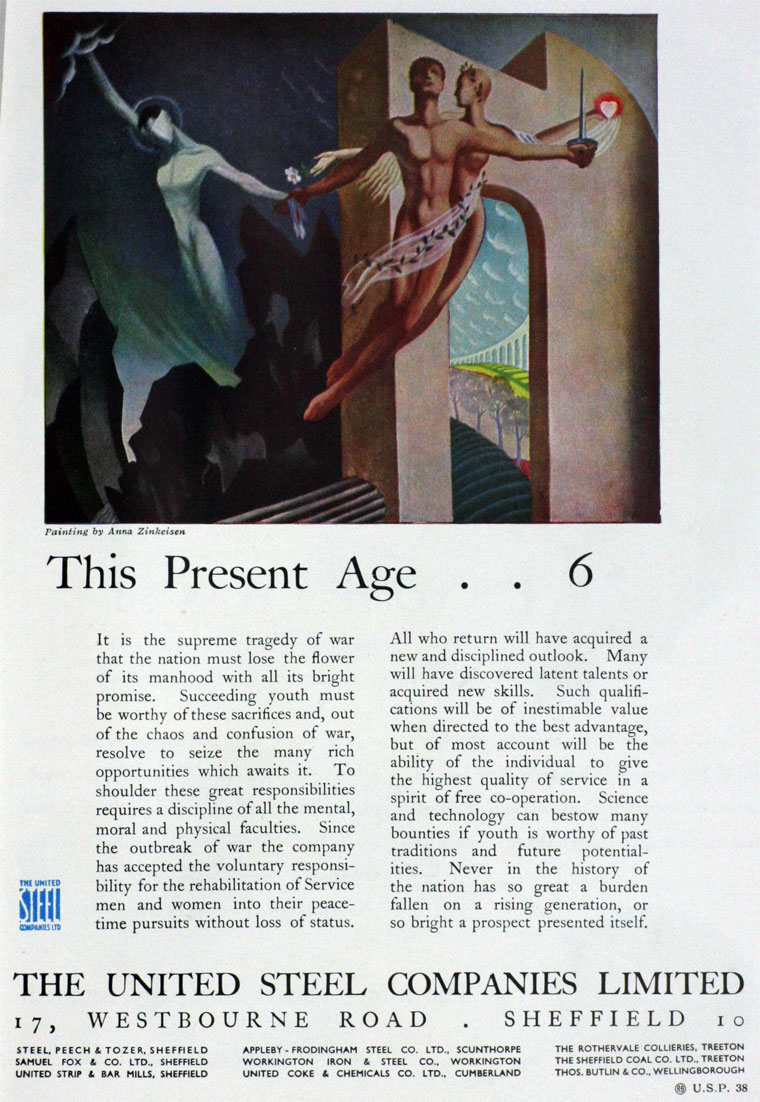 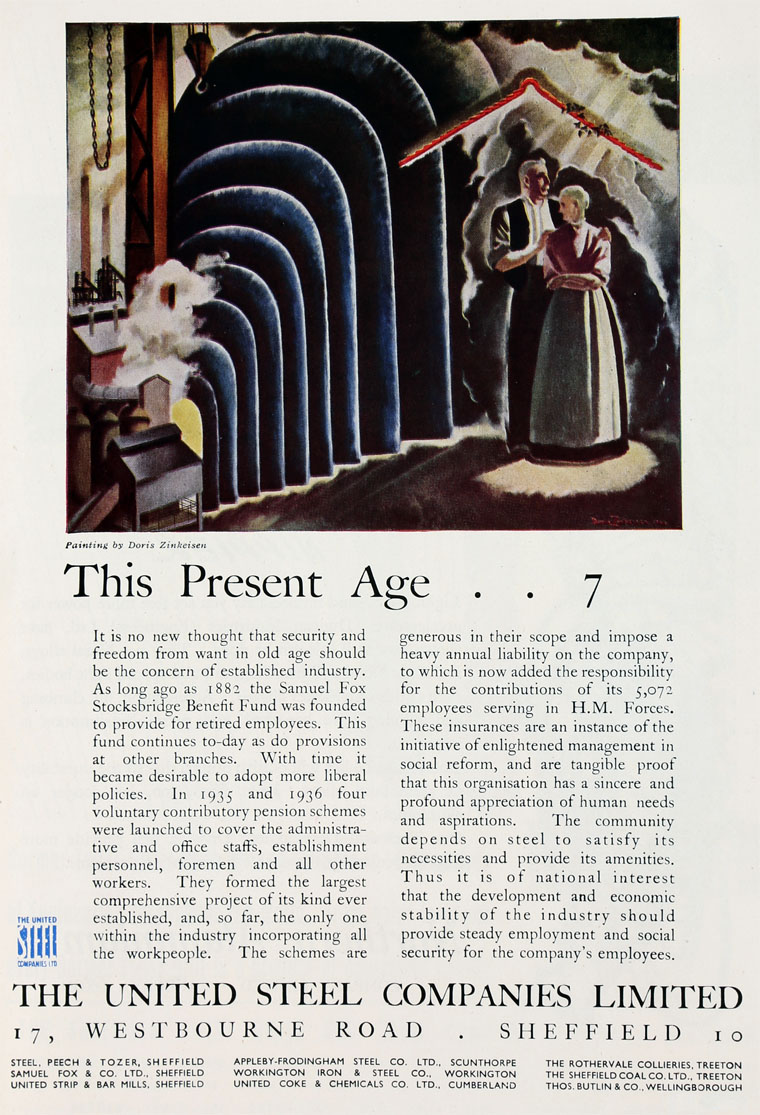 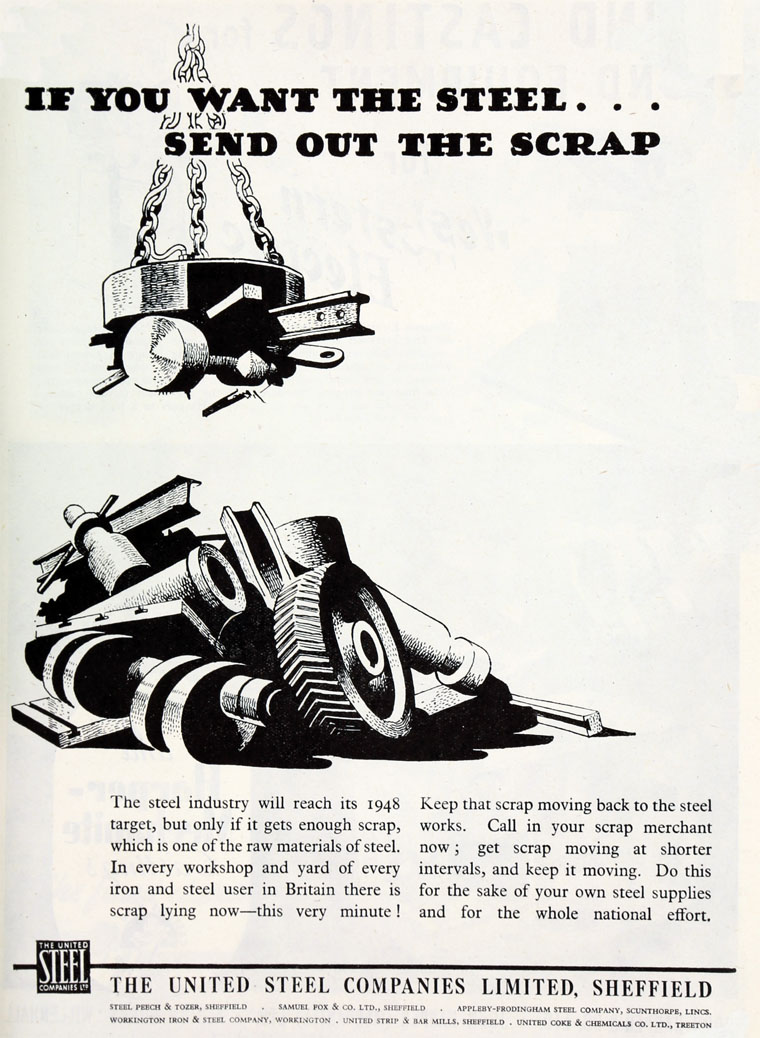 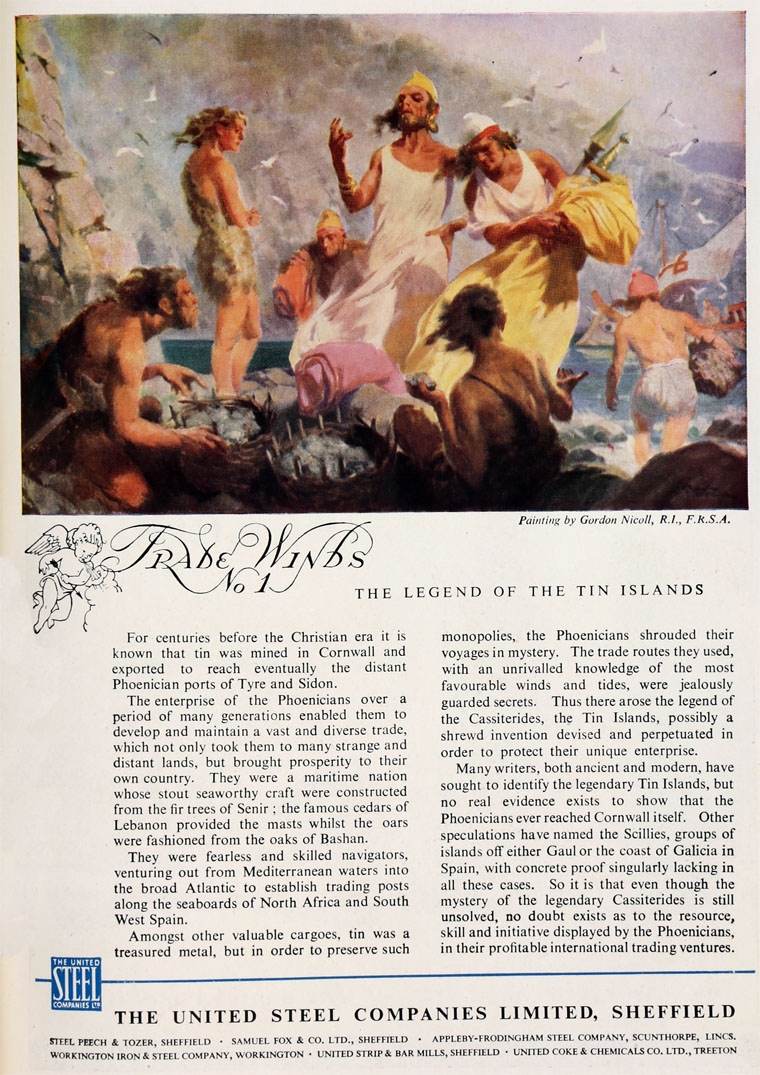 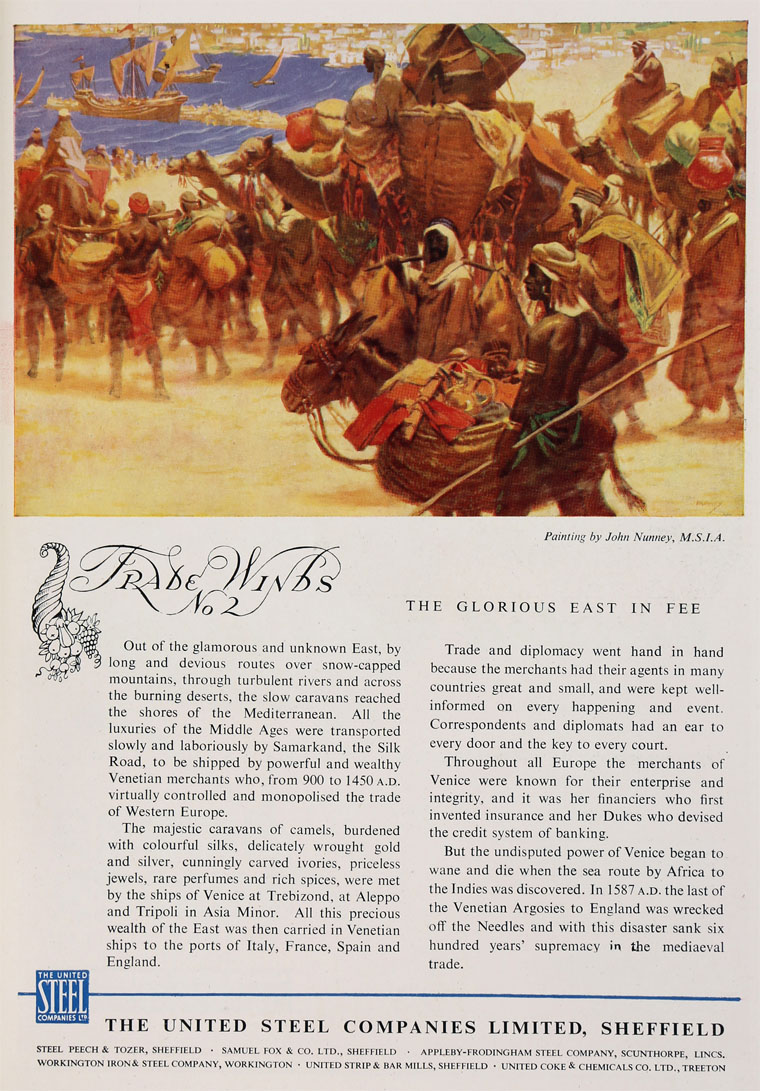 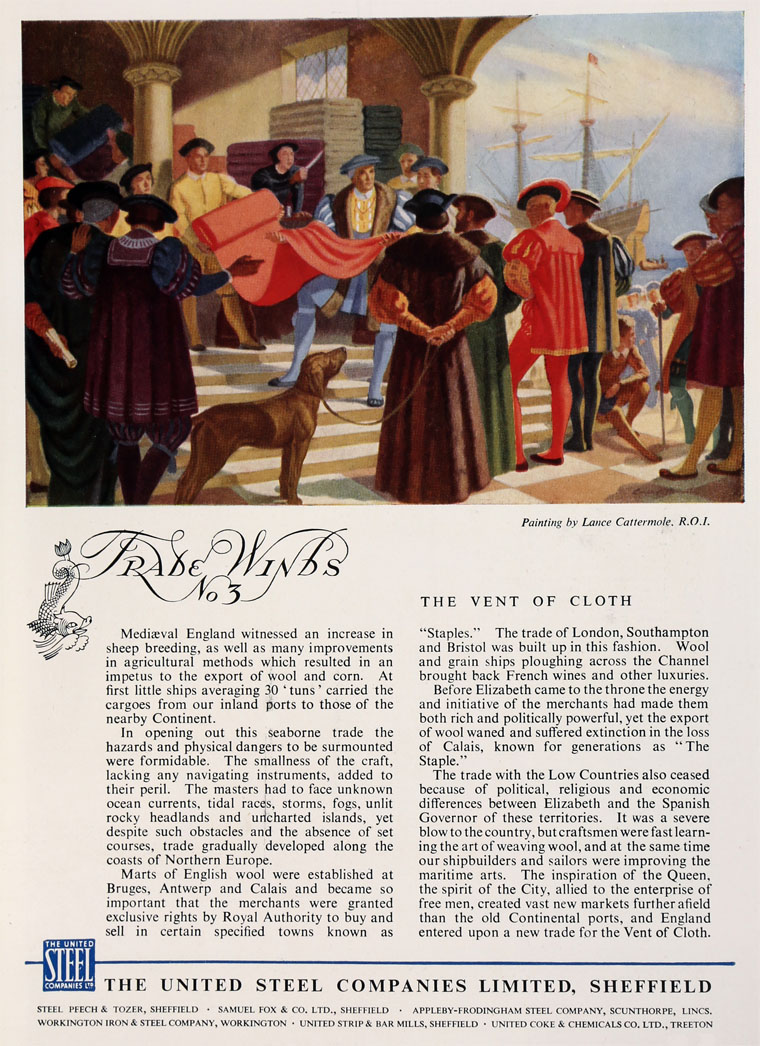 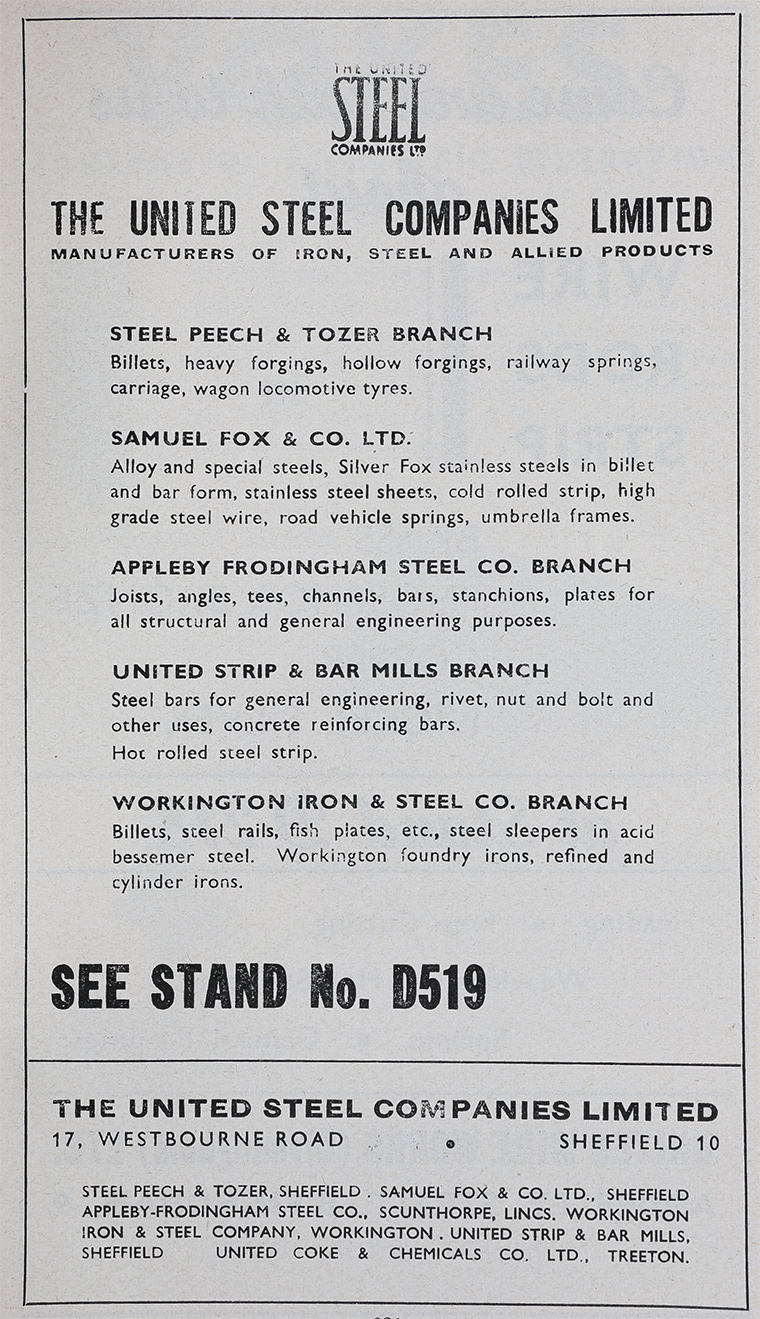 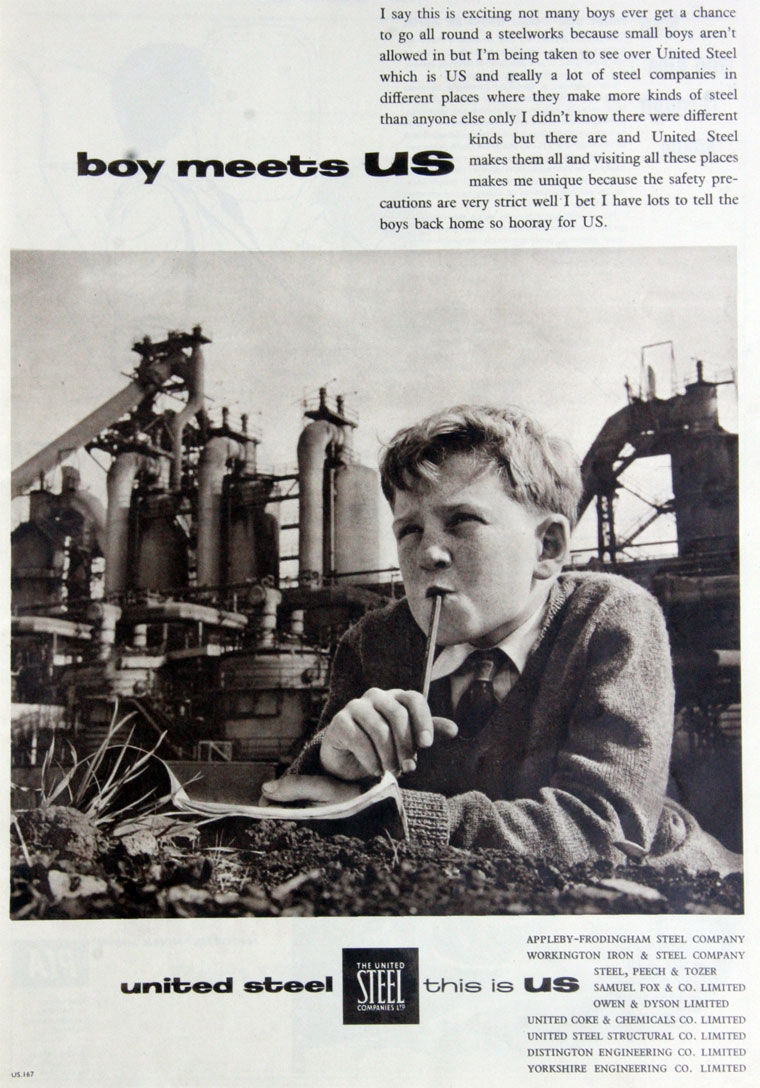 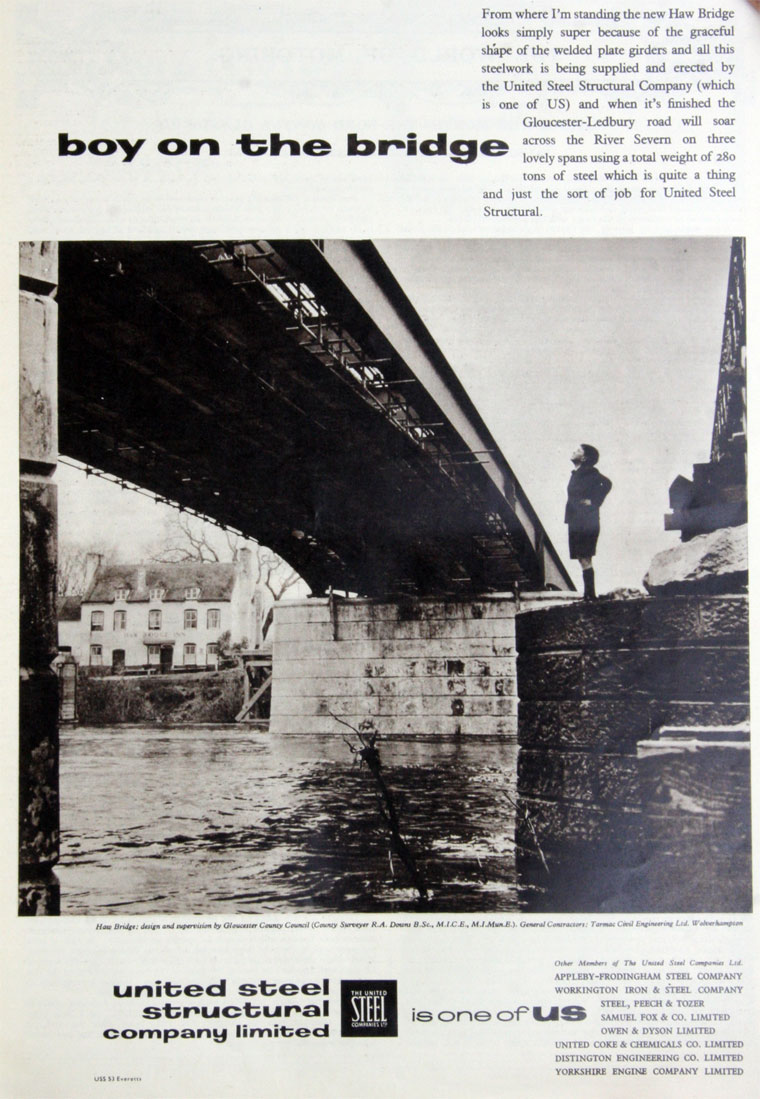 The United Steel Companies were a steel making, engineering, coal mining and coal by- product group based in South Yorkshire and Lincolnshire [2].

1918 Formed at the instigation of Henry Steel of Steel, Peech and Tozer, who became the first chairman. By exchange of shares the new Company acquired various other companies:

Later acquired other companies including[4]:

1920 On the death of Harry Steel, Albert Peech became chairman. [5]

Modern continuous-rolling mills were put down at Templeborough for the production of strip and bar as Templeborough Rolling Mills; for this purpose United Strip and Bar Mills, a subsidiary Company, was formed. But by 1922 the plant was idle[6]

1926 - December. By the end of the year, The United Steel Companies had eight furnaces working - five at Templeborough and three at the Ickles. The possession of heavy stocks of raw material enabled the firm to resume work quickly. Both basic and acid steel were being produced and for a time the chief bulk of the output was needed for the company's own mills and other plant.[7]

Much progress had been made with the erection and equipment of the new plate mills of the United Steel Companies at Appleby, Lincolnshire. During the strike workmen were giving the finishing touches to the plant, and work was expected to start for the beginnings of 1927. The mills were stated to have been among the largest in the country, and obtained their steel from the United Steel Companies' works at Frodingham. The Appleby plant originally consisted of blast-furnaces only, which were used for sealing with the iron ore from the company's adjacent properties. The extensions were started during the war, when the Appleby Co, in compliance with a request of the Government, undertook the construction of blast and steel furnaces, and modern mills for the rolling of plates for shipbuilding and tank purposes. A Government subsidy was given, amounting, it is understood to £650,000. The total cost of the extensions was around £4,000,000 in 1926.[8]

1934 Opened the Central Research Department at Stocksbridge, to carry out research into the various processes involved in the production of quality steel.

1944 The Kiveton Park Colliery Co was taken over, with reserves from, amongst others, the Barnsley seam being an attractive proposition. The facilities also included coke and coal by-products (including gas). The colliery interests became part of the National Coal Board at nationalisation. The coke ovens closed in 1956 and the colliery in 1984.

In 1945 the mining portfolio was increased with the purchase of the Shireoaks Colliery Co the colliery being just over the Nottinghamshire border. As with all their collieries, this became part of the National Coal Board in 1947.

1948 The Yorkshire Engine Co was bought by the United Steel Companies Limited. With United Steels wanting new locomotives following the end of World War II the opportunity arose to purchase the company at a good price and also a suggestion to centralise the engineering workshops which would serve their steelworks at Templeborough (Rotherham) and Stocksbridge.

1953 USC retained one third of the shares in the first nationalised company to be sold by the Iron and Steel Holding and Rationalization Agency, namely Templeborough Rolling Mills [13].

1953 Public offer for sale of the shares in the company held by the Iron and Steel Holding and Rationalization Agency; United Steel was the largest steel producer in the UK, accounting for 13.5 percent of national output, and owned iron or mines, coal carbonizing plant and chemical enterprises as well as iron and steel plant[14].

1961 Barrow Steelworks (for which the company had been operating agent since 1942) was acquired from the Holding and Realization Agency [15].

Members of the group included:

1967 The iron and steel works on nationalisation became part of British Steel and the mining interests passed to the National Coal Board. The coal by-products plants came under the ownership of a subsidiary, the United Coke and Chemicals Co. The works, at Meadowhall, closed.

More recently the steel interests at Rotherham, Scunthorpe and Stocksbridge became part of the Corus Group and all the mining interests were closed, the last, at Treeton, in the 1990s.