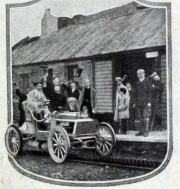 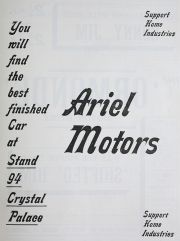 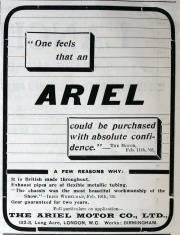 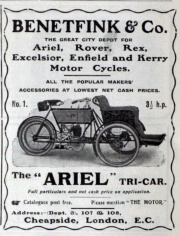 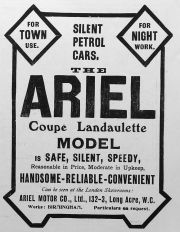 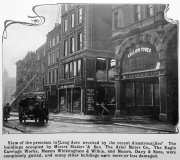 March 1905. The fire damaged premises of the Ariel Motor Co, Slatter and Son, Eagle Carriage Works and Davy and Son.

Ariel Motor Company Ltd, of Long Acre, London, retailer of Ariel brand motor cars. For a summary of the various users of the Ariel name see Ariel - an overview.

The cars were manufactured by Cycle Components Manufacturing Co at Selly Oak, Birmingham.

1904 Harvey Du Cros and Charles Sangster attempted a motorised ascent of Snowdon in an Ariel car but were halted by snow[5] but the Ariel did succeed in an ascent in May 1904.

1905 The Ariel Works at 132 Longacre, London was damaged by fire which also affected many neighbouring properties as well as Slatters coachworks which shared the same premises[6].

1905 An Ariel car gained the only gold medal given to a 4 cylinder car in the Scottish Reliability[7].

1916 At a meeting of Ariel Motors Ltd held at 322, Camberwell New-road it was agreed that

".. the Company approves of the proposed sale of all the undertaking and assets of the Company to Ariel and General Repairs Limited in consideration of the Allotment and issue to this Company or its nominees of 850 fully paid Ordinary shares of Ariel and General Repairs Limited, and instructs the Directors to take all steps necessary for carrying such Sale into effect."

"That Ariel Motors Limited be voluntarily wound up; and that Mr. W. L. Quinton, of 39, Caldeoot-road, Denmark-hill, S.E., be and he is hereby appointed Liquidator of the Company..."[11]