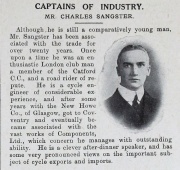 Born at Aberdeen on May 16, 1872; his godfather was Charles Thomas Brock, of firework fame.

After a sound educational grounding at local schools he completed his training at King's College, London. After a brief period "in the city", he was apprenticed to Linley and Biggs, who made Whippet cycles at Clerkenwell Road, London.

Around 1892 Charles Sangster came in touch with F. W. Zimmer, inventor of the "Zimmer" hand power gear, a method of assisting the drive by means of a rocking handle-bar driving an auxiliary chain to the bottom bracket through a ratchet clutch. Sangster rode a tricycle fitted with the gear, but whether he was commercially interested in it is not known, possibly it was made in the Whippet factory, and he merely demonstrated it for the inventor.

1893 Sangster joined the New Howe Machine Co, taking a position in the Glasgow works under the banner of R. L. Philpot, a leader who was to exercise great influence on the rising young designer.

His next move was to the Rudge factory in Coventry where he was associated with W. Radford, a works manager with a reputation for efficiency.

Shortly after this the Philpot group migrated to the Cheylesmore works of the Coventry Machinists Co, and here Sangster had his great opportunity; with a free hand he designed the new Swift models for 1895, completely revolutionising the somewhat stodgy patterns of the oldest firm in the cycle trade.

He secured financial backing to erect a big new factory at Selly Oak, on the outskirts of Birmingham, where, in collaboration with R. F. Hall and Harvey du Cros, jun., he inaugurated the Cycle Components Manufacturing Co, making fittings for the trade.

1897 While the Components Co. continued to supply ready to build fittings for the trade, a kindred concern was started in a section of the factory to manufacture Ariel cycles, under the direction of Charles Sangster. Ridden to victory in the world's championships of 1897 by J. W. Stocks (professional) and E. Gould (amateur) and paced by "Ariel" multi cycles, C.S.’s new marque quickly achieved commercial success, the agency being much sought after by retailers throughout the country and abroad.

The demand for quadruplets and quintuplets for the great Dunlop teams of pacemakers, provided scope for Sangster's ingenuity; these cumbersome machines had to withstand stresses which could not be calculated in the Drawing office, and it is to the credit of Charles Sangster that the "Ariel" quads and quints gave no trouble.

He was always ready to take up and commercialise the ideas of others. Notable instances are the Crabbe brake and the Lea reflex rear "light", both of which were made under his direction in the Components factory and marketed by his staff. He was one of the first to adopt the "Coslet" system of rust proofing, and before the advent of the present forward opening drop out, took up the "Cosset" patent fork-end and fitted it to “Ariel” and “Fleet” bicycles.

He devised the method of manufacturing the "Endless" rim, and designed the machinery for rolling the strip steel and welding the join.

1896 Charles Sangster was a pioneer motorist and motorcyclist. Importing a French De Dion tricycle soon after the repeal of the "red flag" Act, in 1896, he used it to gain experience, and by 1898 he had designed the “Ariel” motor tricycle, the main feature of which was the engine within the wheelbase. This was perhaps the most efficient tricycle ever marketed. During the last war C.S. took out several patents for armament details; these included an improved machine gun tripod, a metallic gun belt, a new type of hand grenade, and a wire cutter for attachment to rifles

From 1893 to 1908 the records of the Patent Office reveal no fewer than 145 applications for patents in the name of C. T. B. Sangster.

We regret to announce the death on Monday last, at 74, Salisbury Road, Moseley, Birmingham, of Mr. Charles Sangster, one of the pioneers of the cycle and motor cycle industries.

His early associations date back to the first dawn of the bicycle as we know it to day, as he was first connected with the New Howe Cycle Co, of Glasgow, and then with the Coventry Machinists Co, the firm that gave rise to the Swift concern, generally regarded as the father company of the bicycle trade. He then went to Components Ltd, in 1895.

For more than thirty years Mr. Sangster was managing director of Components, Ltd., and, of course, occupied a similar office in the Ariel Company. It will also be remembered that he was chairman of the Swift Company for a considerable period, and also owned or controlled, amongst other companies, the Rover Cycle Co, the Midland Tube and Forging Co, and the Endless Rim Co.

He was President of the Motor and Cycle Trades Benevolent Fund in 1921.

One of his two surviving sons (the eldest was killed in the war) is Jack Sangster, managing director of Ariel Motors (J.S.).Ltd.