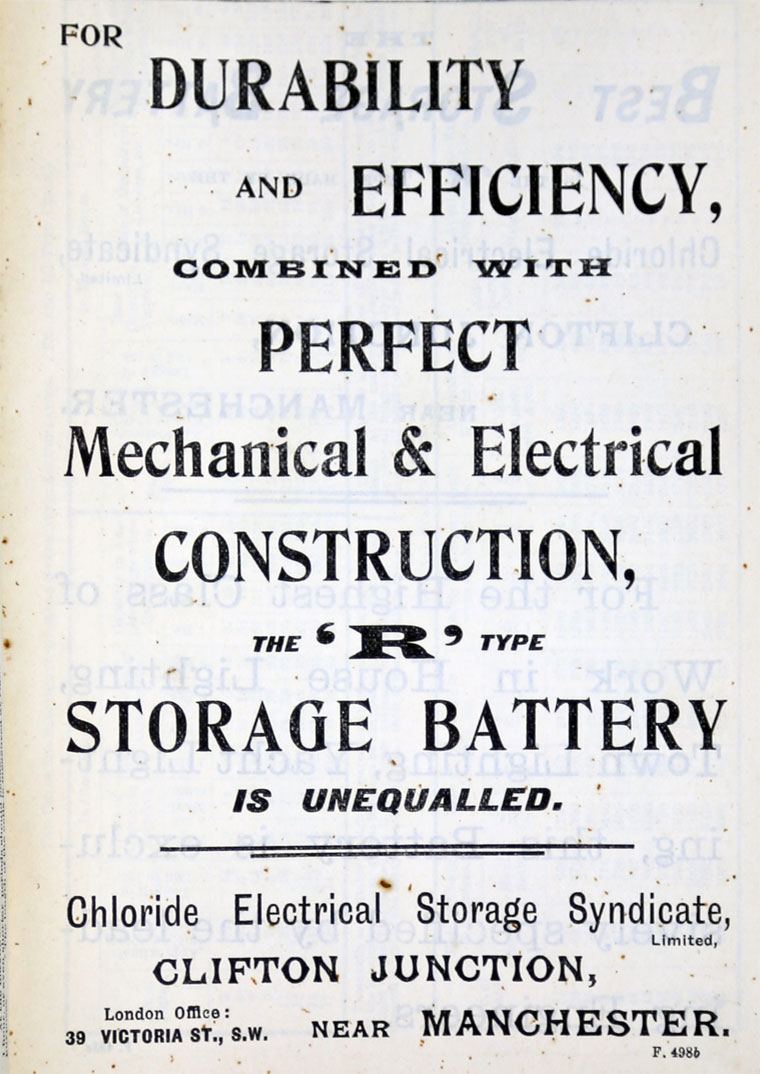 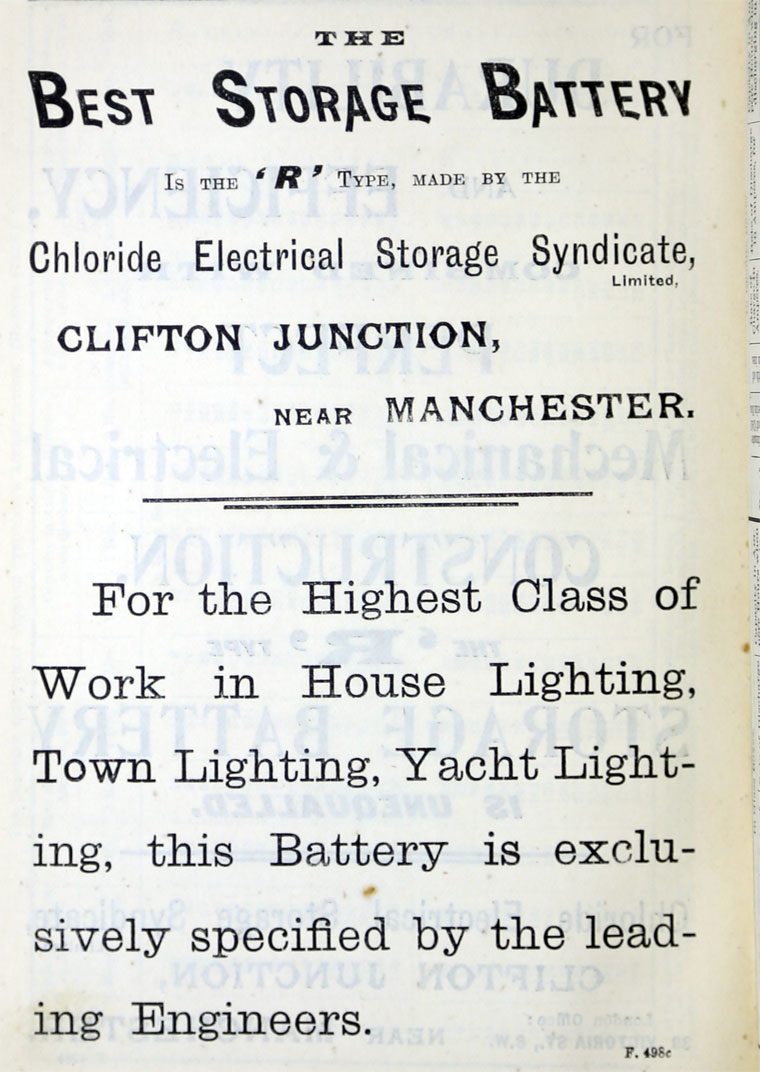 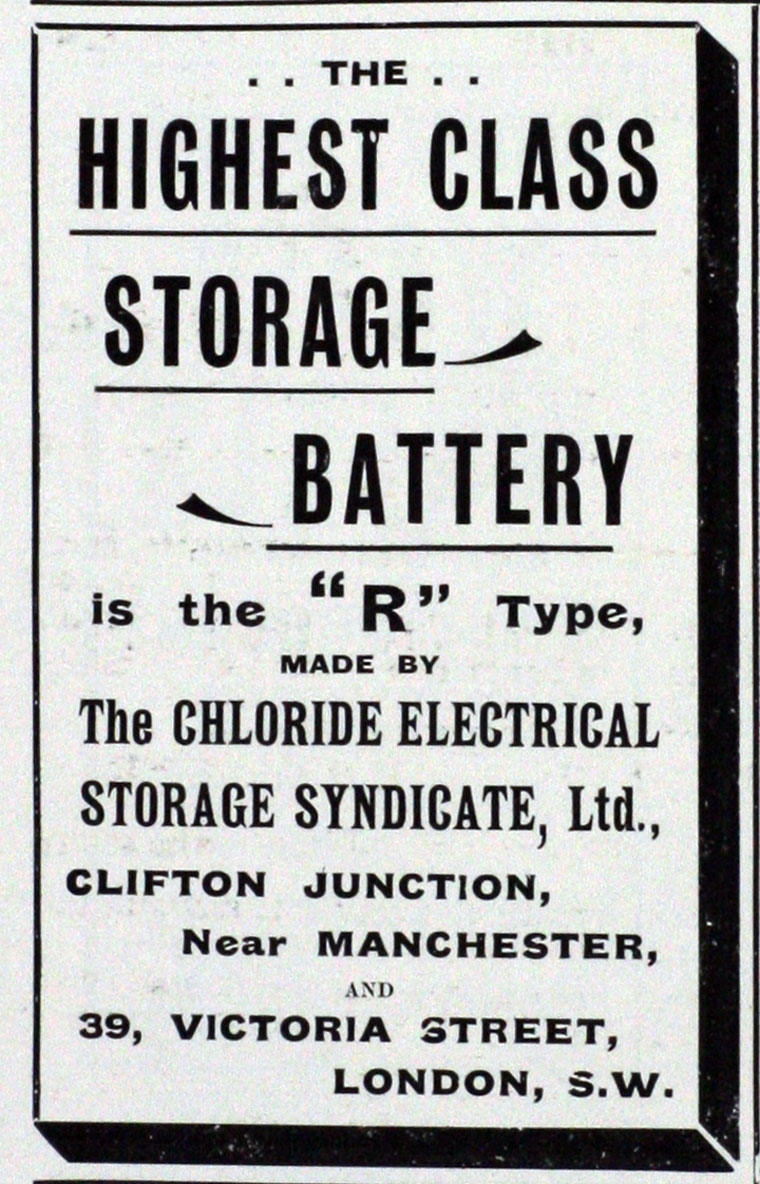 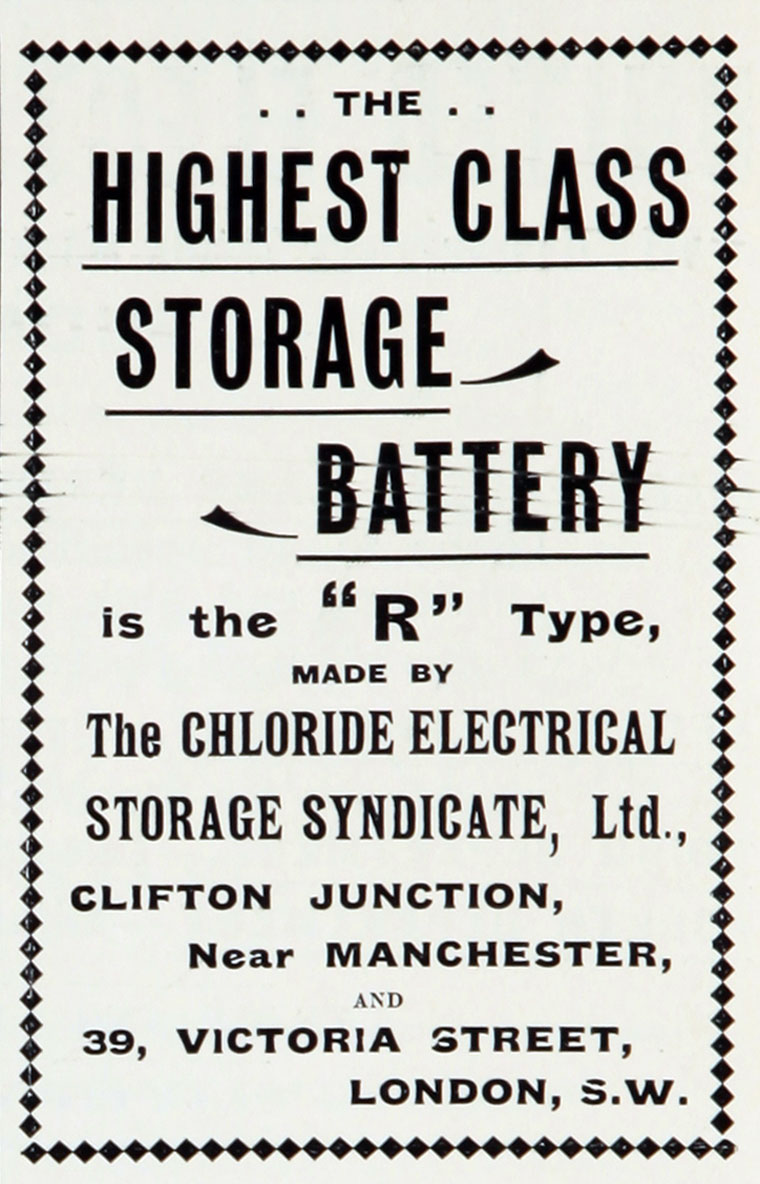 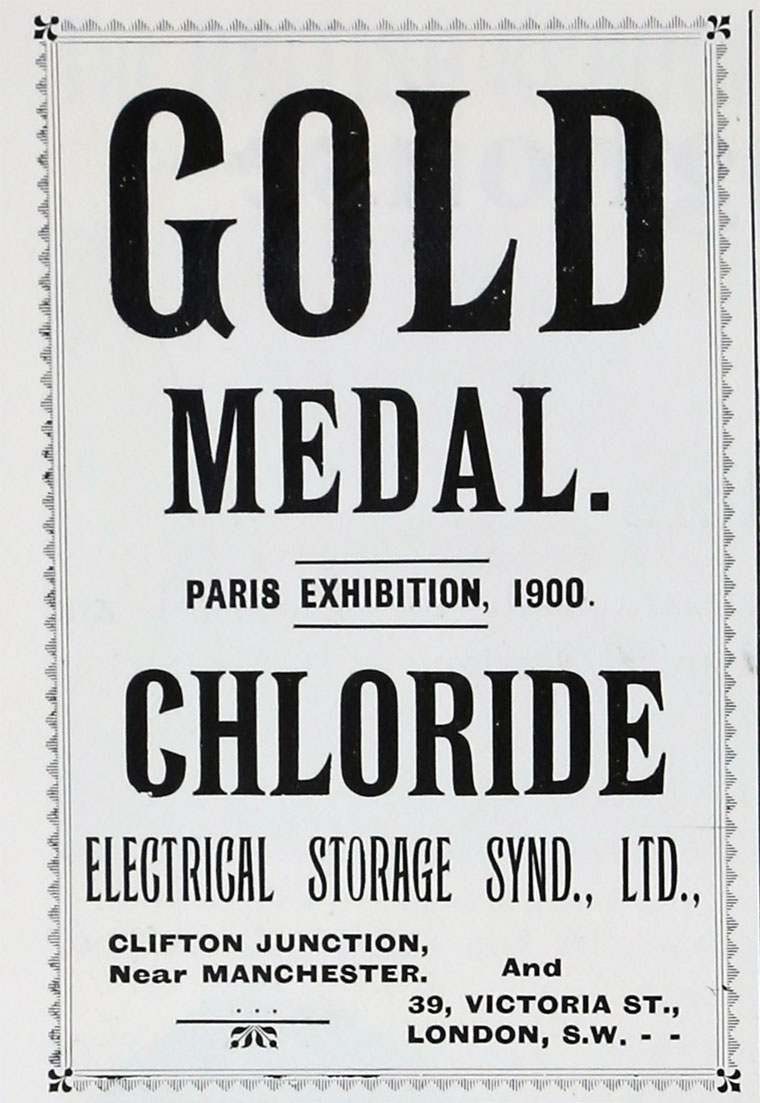 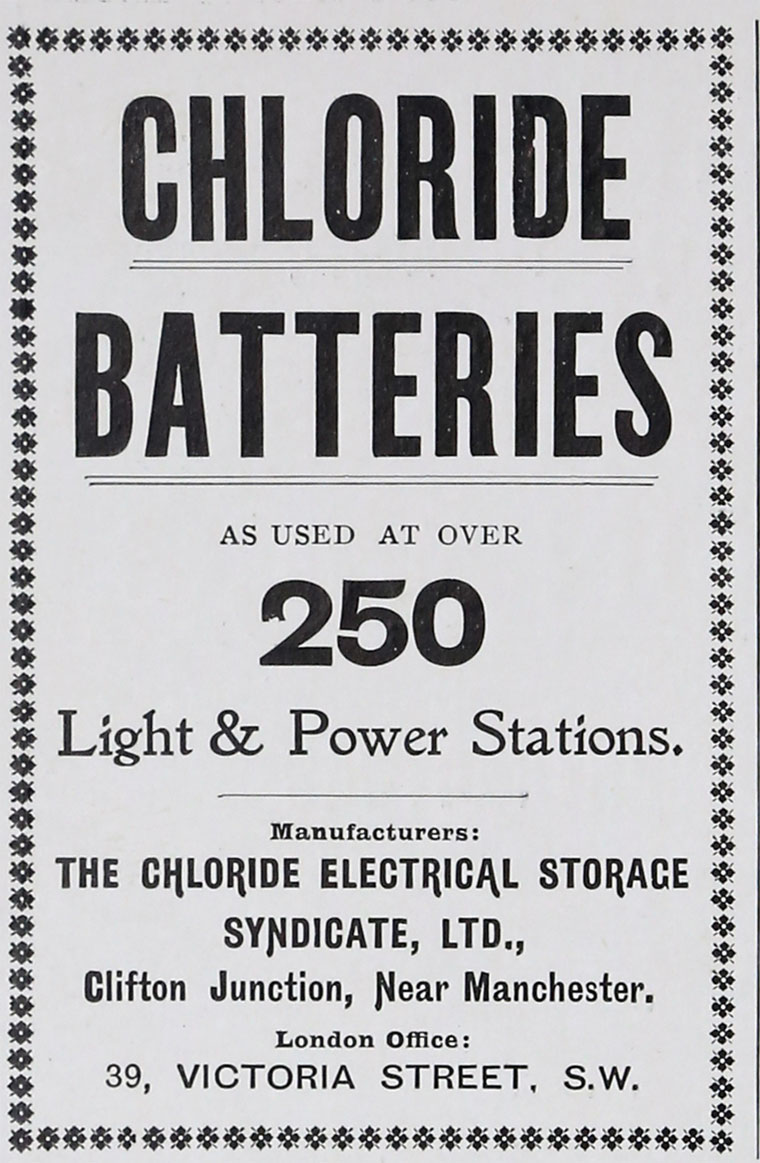 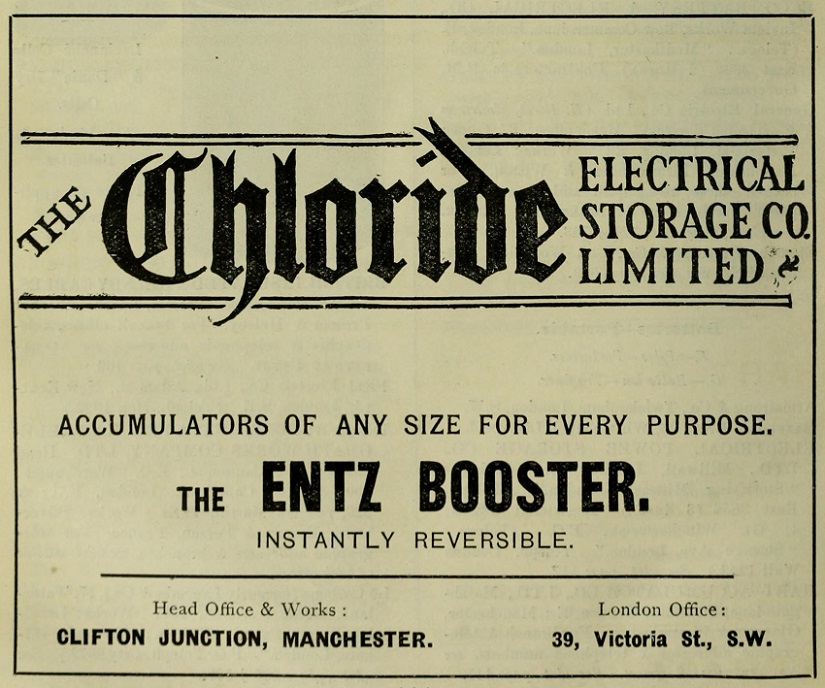 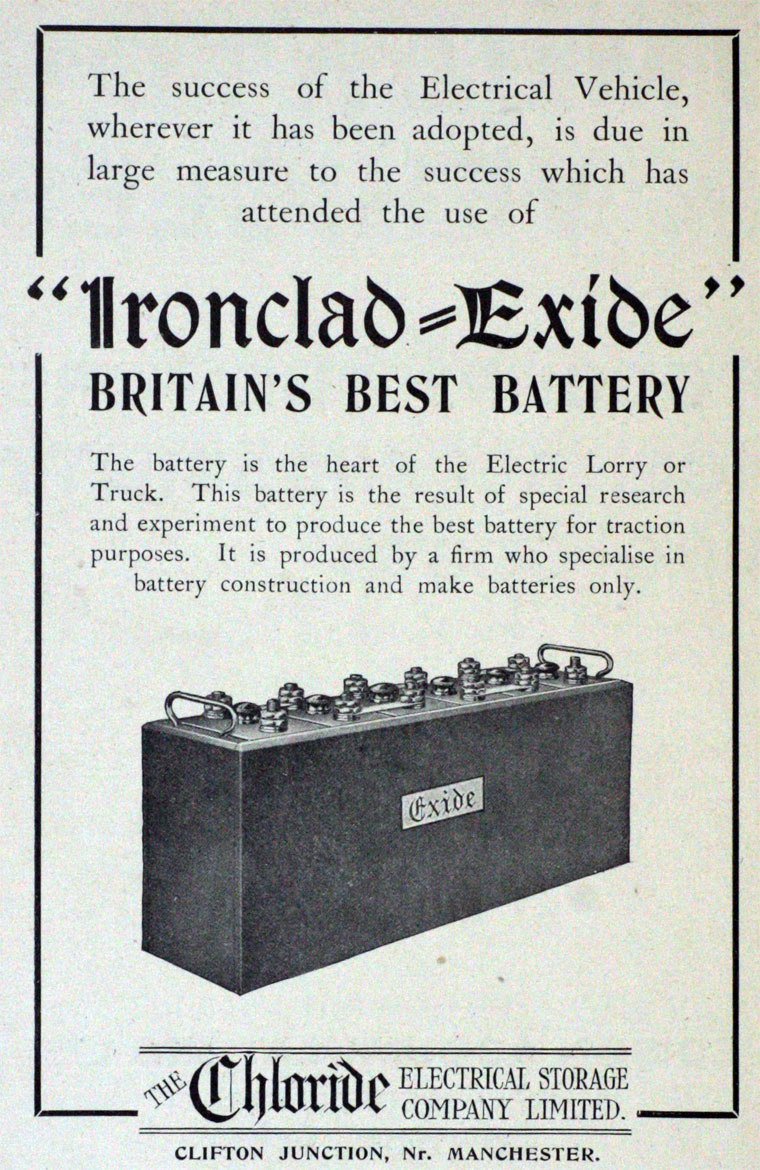 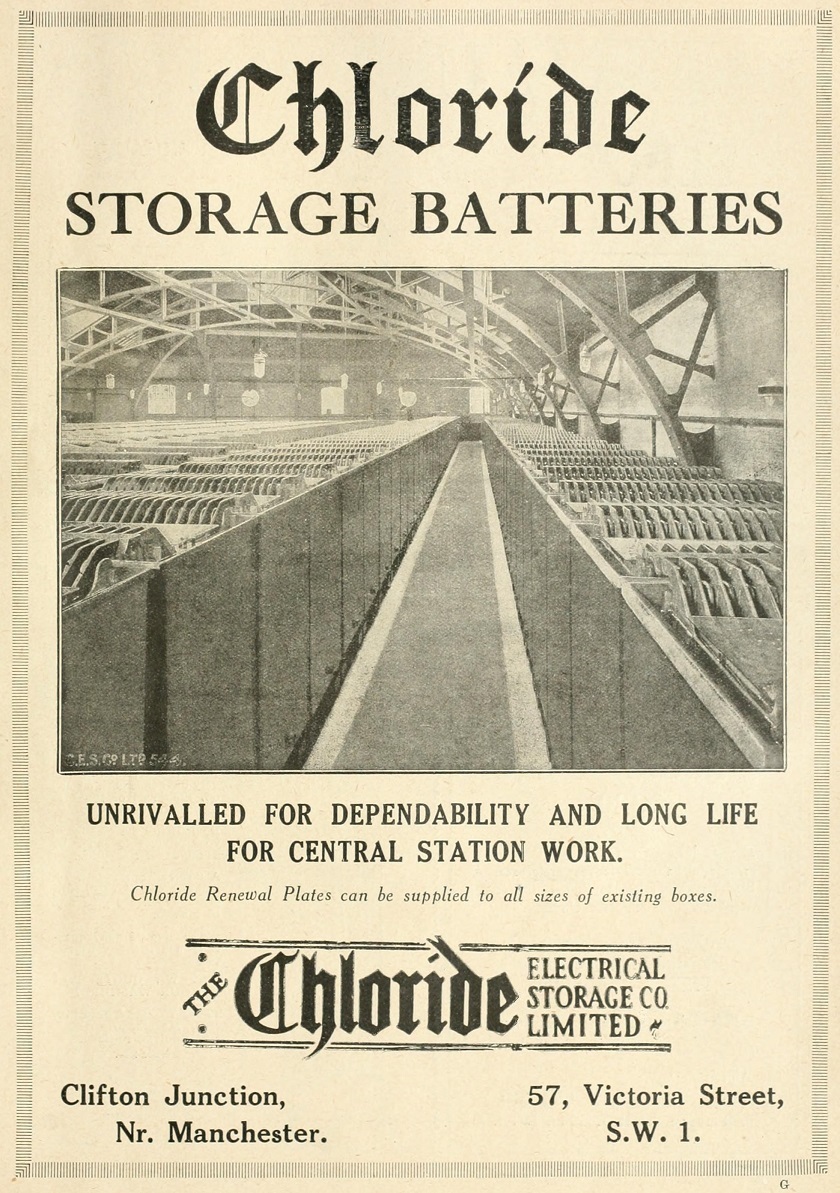 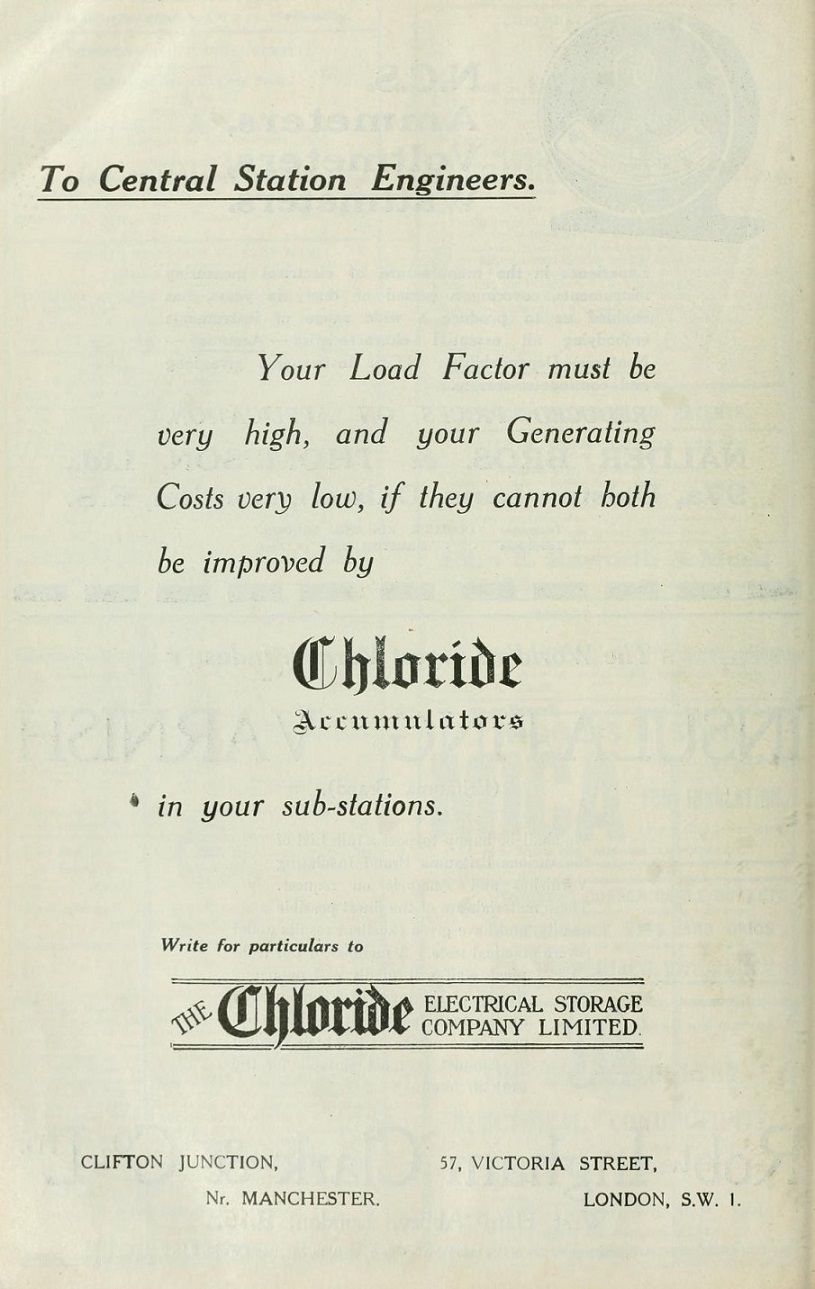 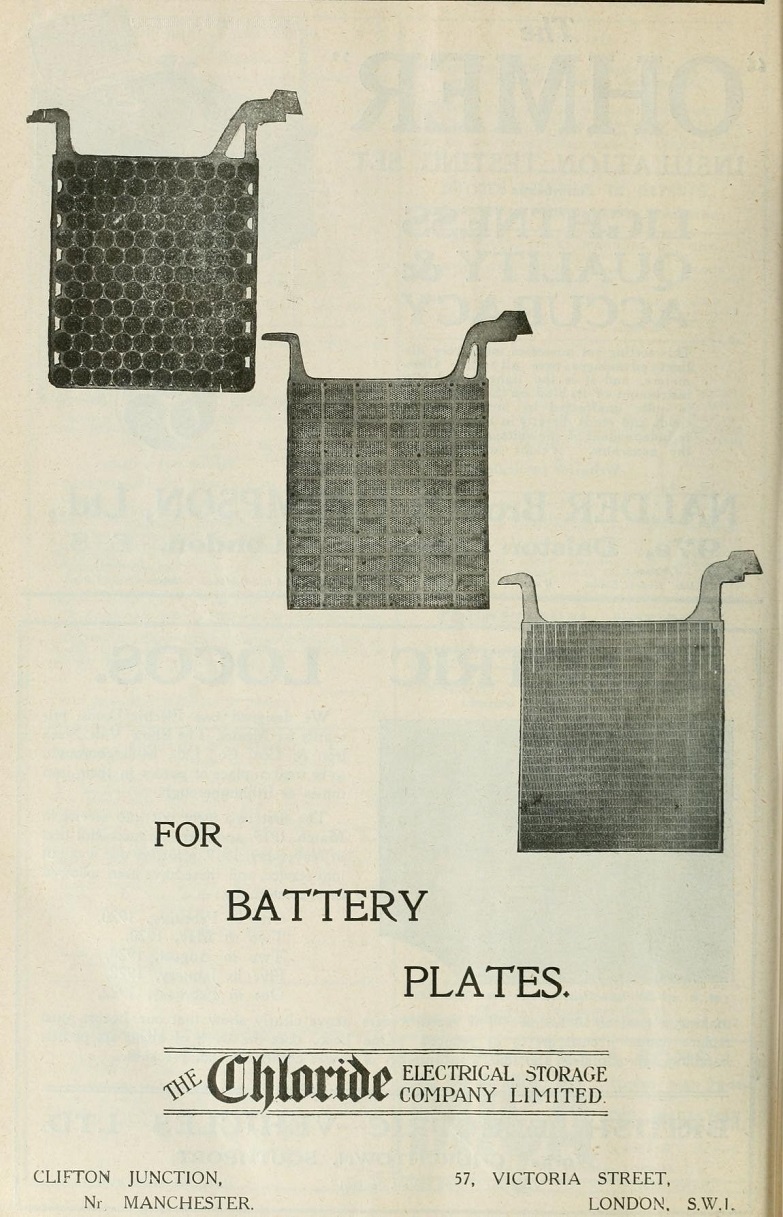 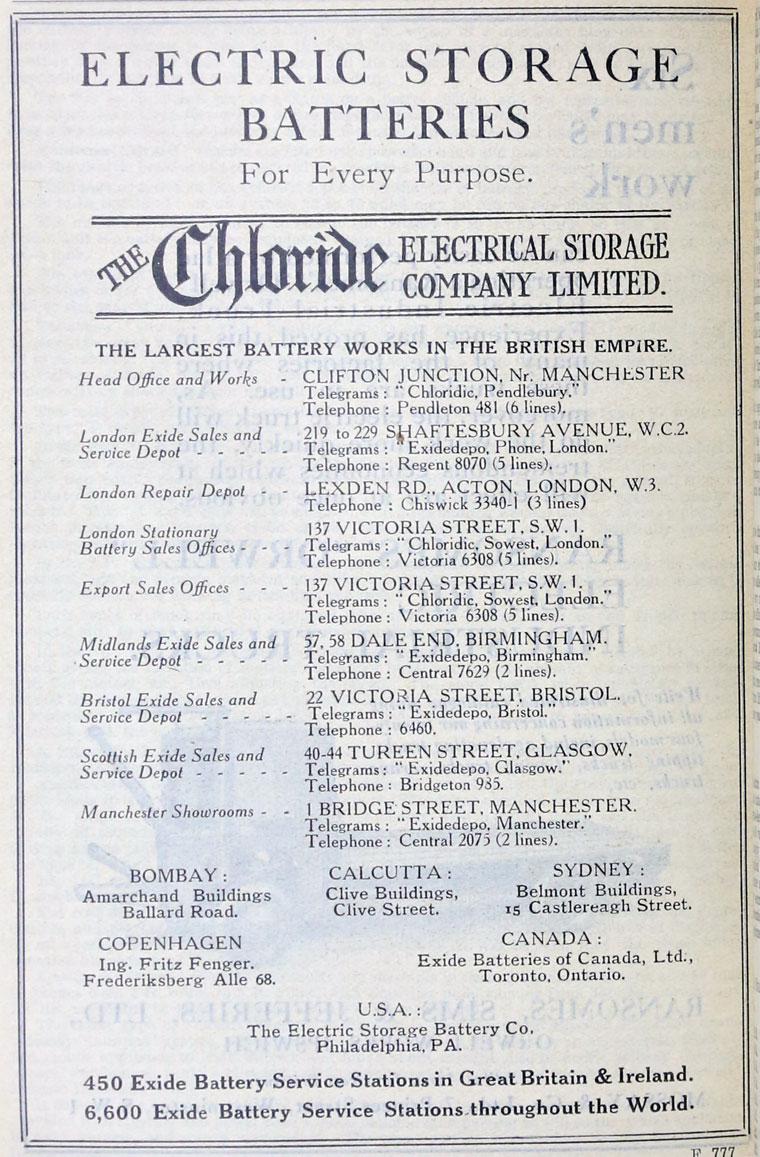 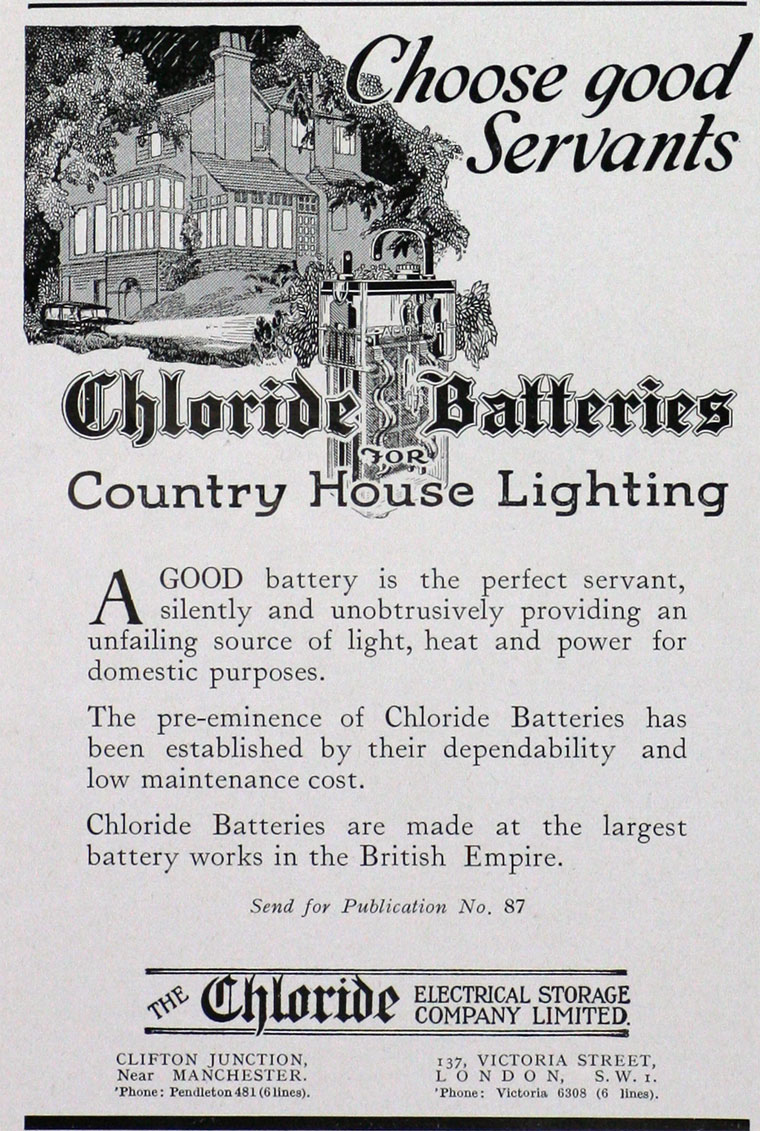 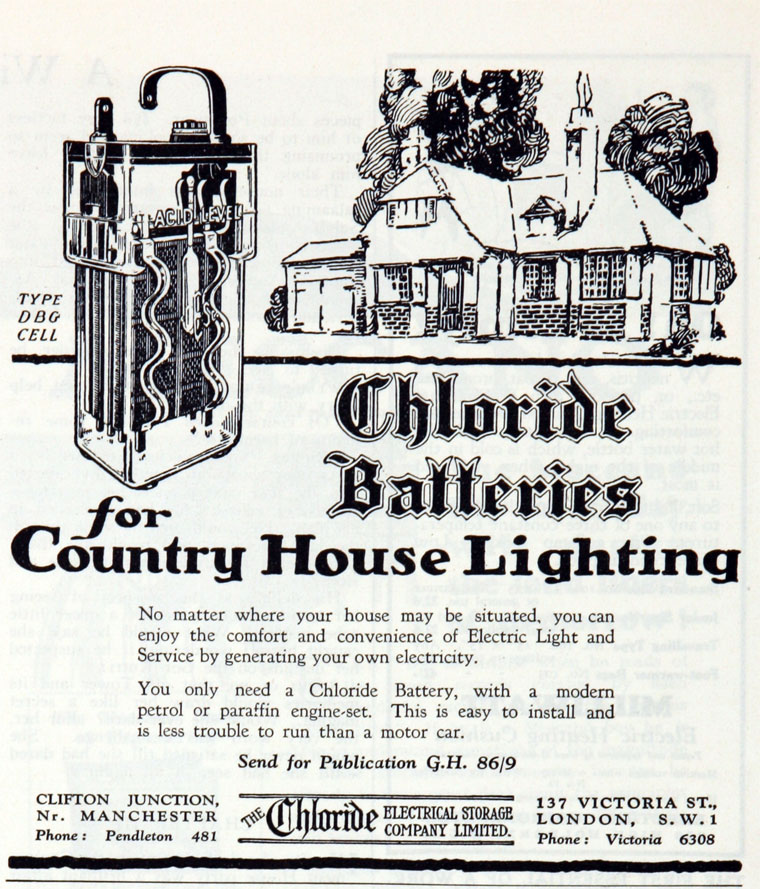 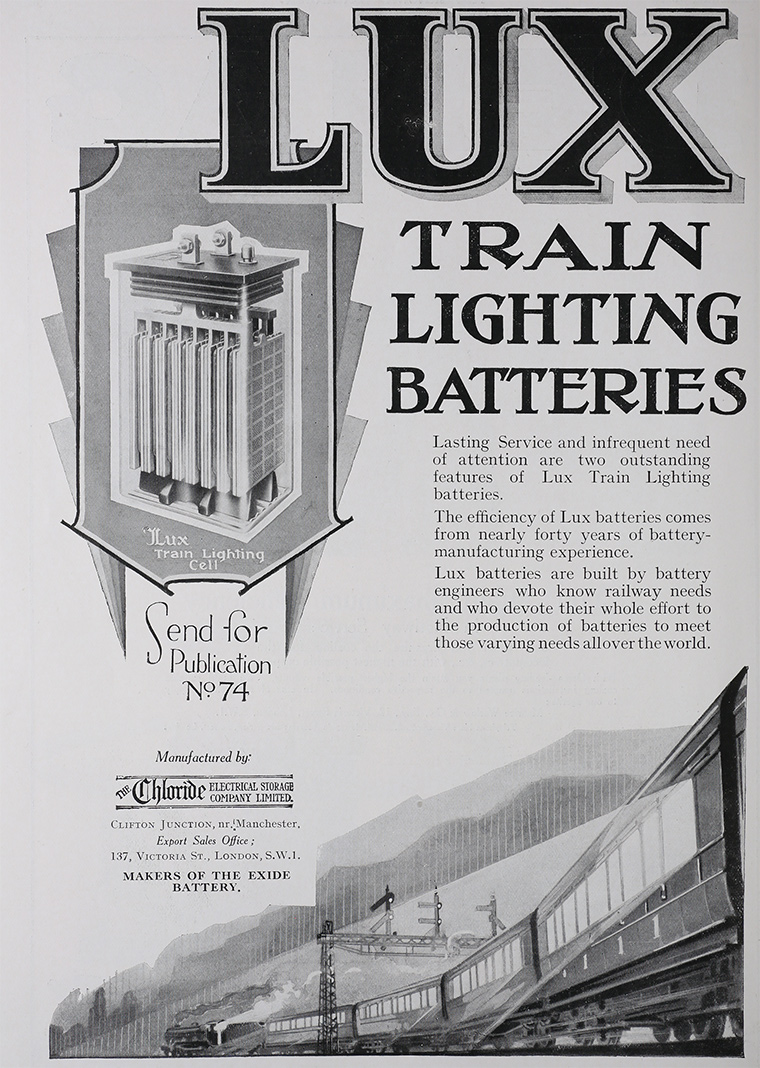 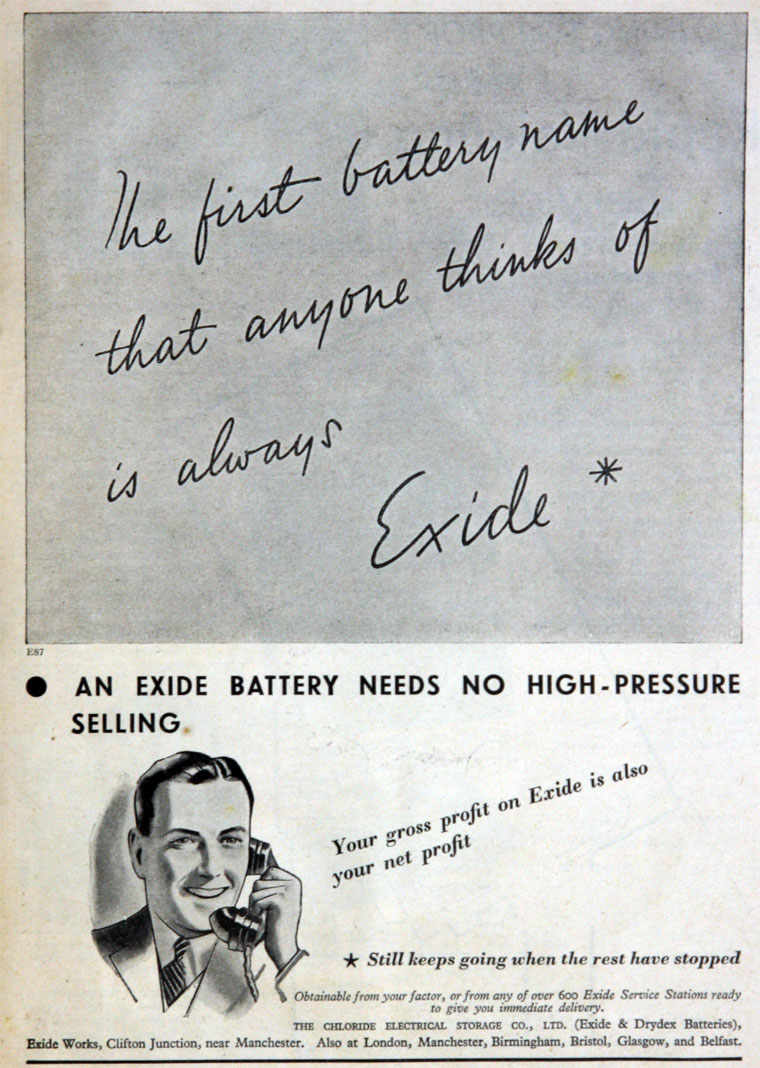 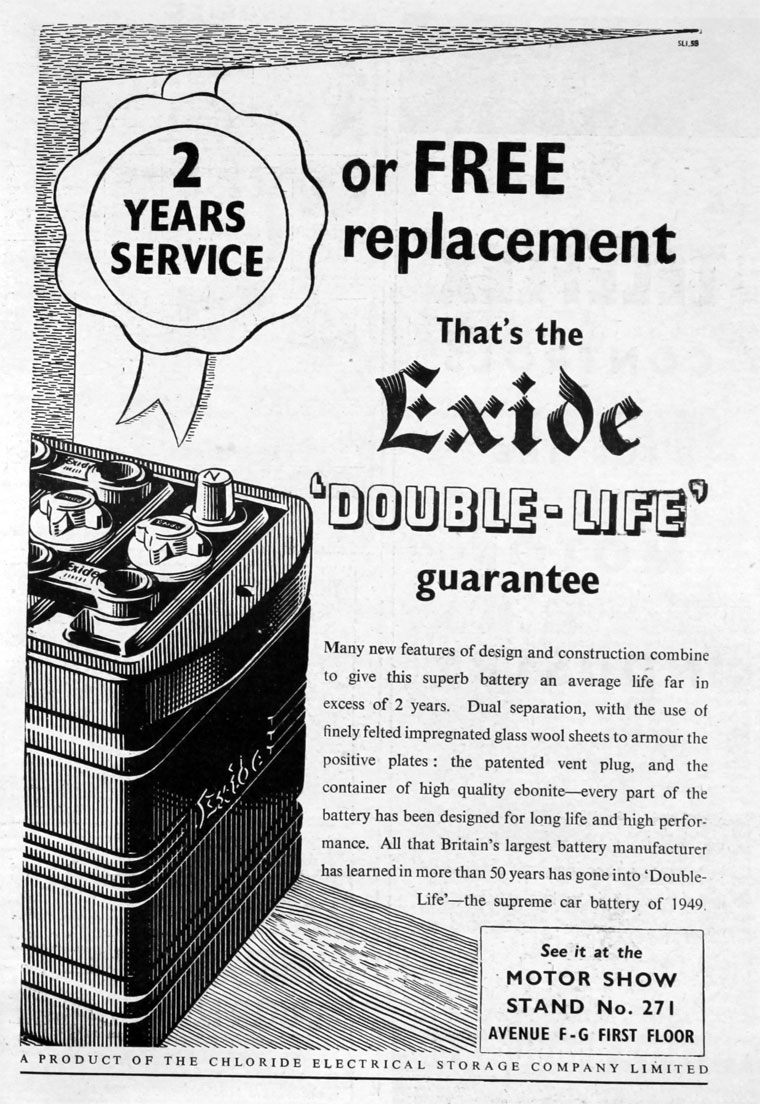 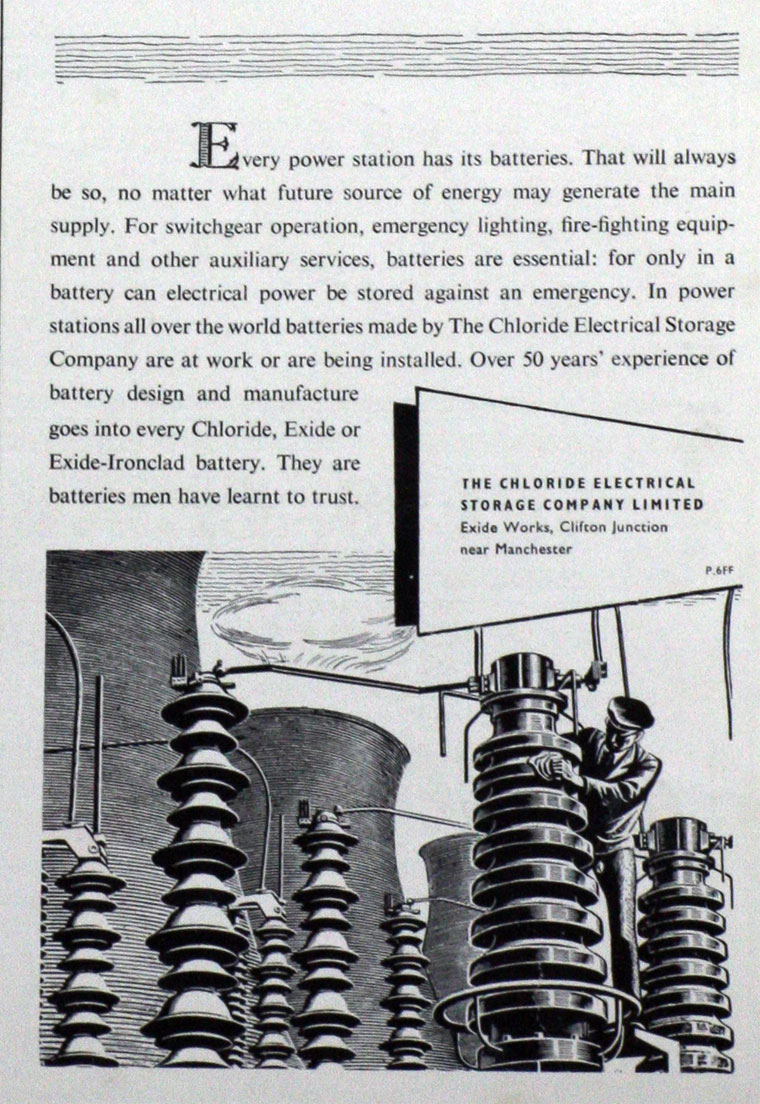 of Clifton Junction, Manchester and London.

1891 The company was registered on 12 December as the Chloride Electrical Storage Syndicate. [1] to exploit patents of the Electrical Storage Battery Co of New Jersey, the United Gas Improvement Co of Pennsylvania outside USA and Canada. Further agreement in 1892 focussing mainly on storage batteries.

1902 The name was changed to its current title, Chloride Electrical Storage Co. Main business in supplying batteries for stationary applications and submarines

1920 October. Exhibited at the Commercial Motor Exhibition at Olympia with Ironclad Exide batteries for road vehicles. [3]

1923 Visit of the Institution of Electrical Engineers: 1923 Review -At the works of the Chloride Electrical Storage Company, the visitors were able to see the manufacture of electrical storage batteries for practically every type of service. The company employs about 1000 hands, the majority being men. The raw materials - lead, litharge, timber, glass, etc. - are received by rail, canal and road, and, similarly, the finished goods are dispatched by any one of the three routes, as mat be most convenient. In the moulding department grids of pure lead, or lead alloy, are cast, either by hand or under pressure, in special moulds of intricate design. These moulds are all manufactured by the company in its own shops. "Exide" plates, both positive and negative, and also box type negative plates, for chloride and plantide batteries, are a;l pasted by hand..." Read More

1929 Acquired National Accumulator Co which had been formed in 1928 to hold all the shares in D. P. Battery Co and a major interest in Hart Accumulator Co; the company was owned by J. Stone and Co and other competitors; the purchase also provided controlling interests in Premier Accumulator Co and Fuller Accumulator Co (1926). The purchase of National also brought the acquisition of M. C. L. and Repetition[5]. Agreement with J. Stone and Co relating to batteries for train lighting which prohibited Stones from making lead-acid and alkaline batteries and assigned to Chloride an agreement with S.A.F.T. regarding alkaline batteries; Chloride was to supply these to Stones.

1933 With Joseph Lucas Ltd and Oldham and Son, set up the British Starter Battery Association.

1936 Completed the acquisition of the alkaline batteries and other interests of Britannia Batteries Ltd.

1938 Acquired Rothermel Corporation Ltd, which had a subsidiary that made parts for road vehicles.

1943 Disposed of Rothermel Corporation and M. C. L. and Repetition.

1949 Name of Summit Battery Co Ltd changed to Chloride Batteries Ltd. Took over the manufacture and sale of electric storage batteries from the parent company.

1973 The name of the holding company became Chloride Group plc