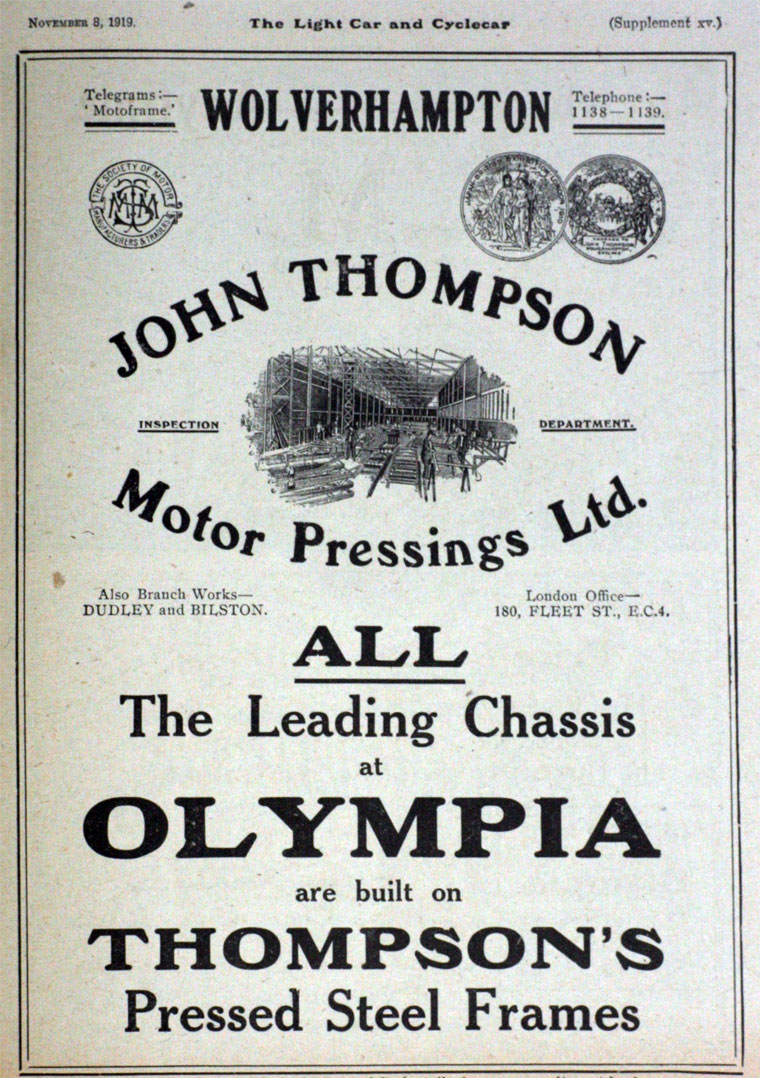 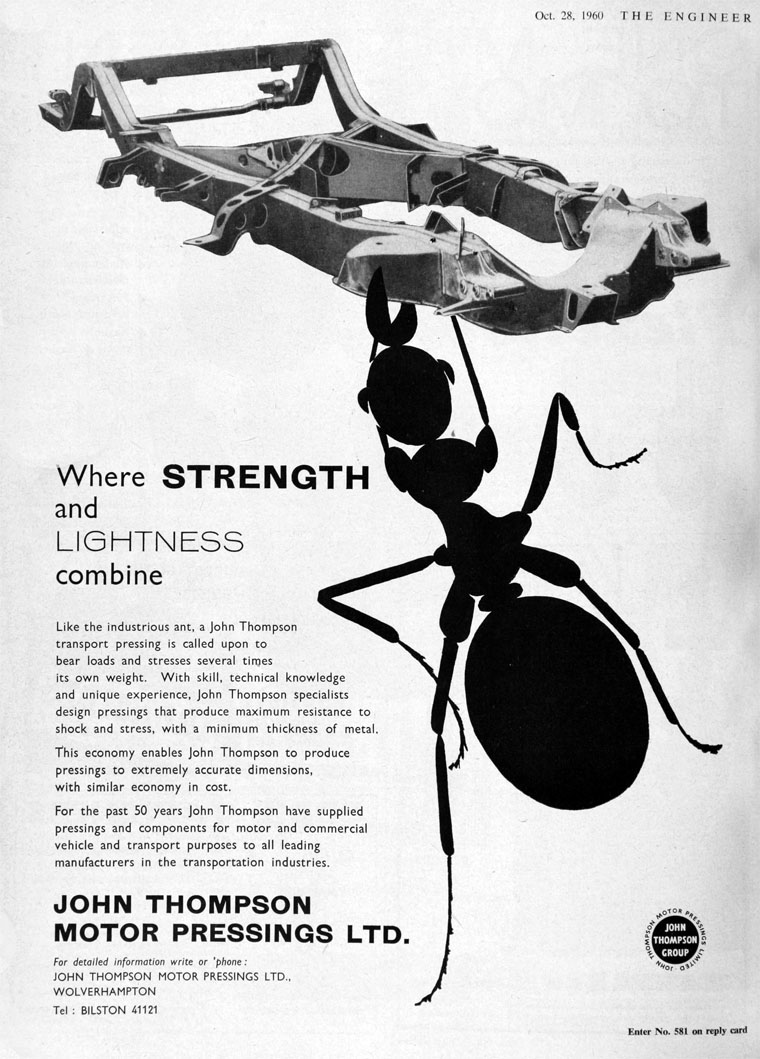 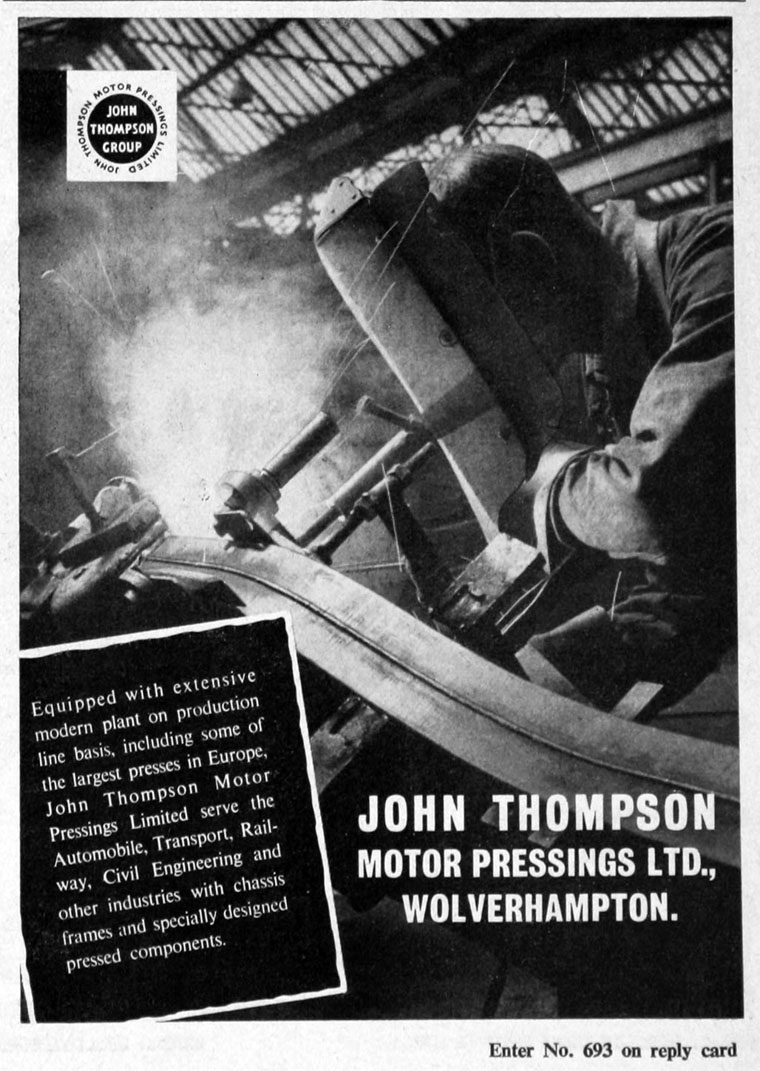 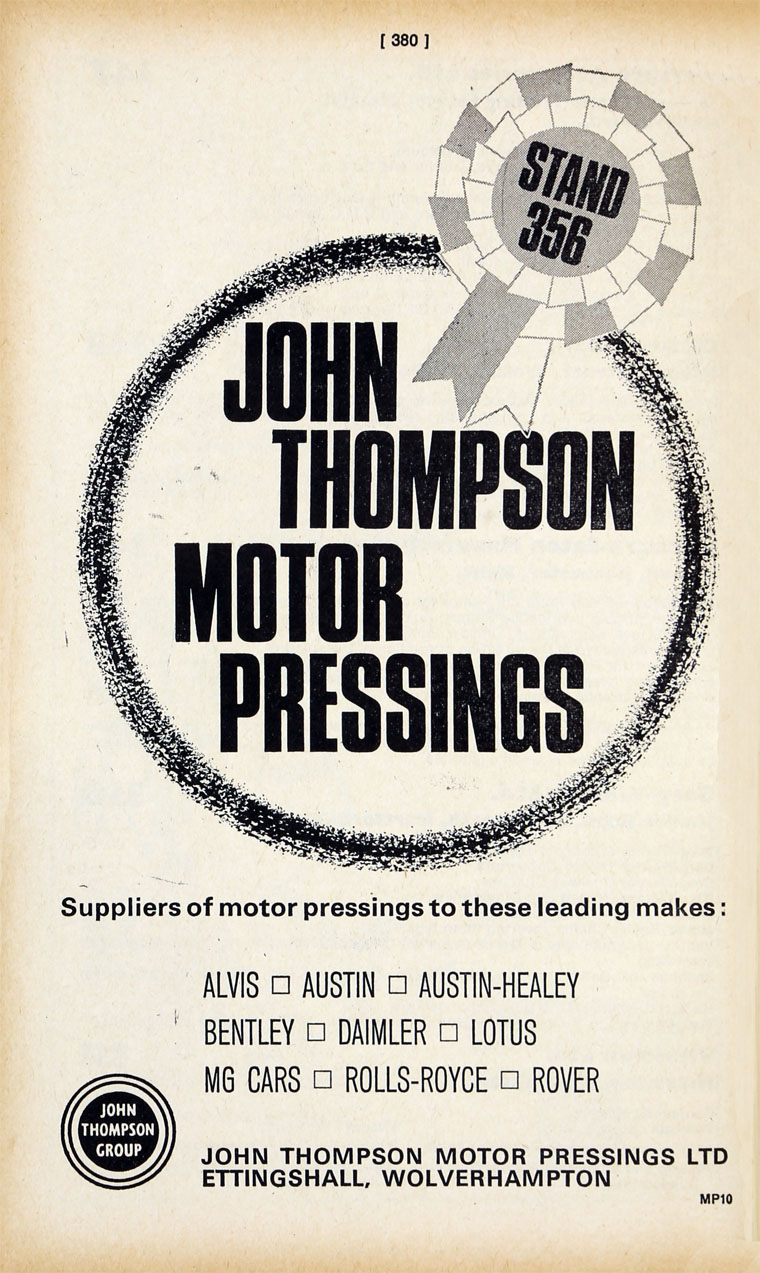 By 1914 the John Thompson firm had been divided into four departments:

1920 The annual meetings of the 4 companies was held. In the report it was stated that these 4 companies had "recently been formed" to take over the business of Messrs John Thompson[1].

1920 The Motor Pressings company alone was subdivided into:

WWII: The Motor Pressings factories were very busy. A wide range of equipment, apart from chassis frames for military vehicles, was produced. One of the main products was the "twenty-five pounder" gun trailer produced for the War Office. Amongst the other items were "two pounder" anti‑tank shields that were supplied to the Royal Ordnance factory, at Nottingham, 3.7in (9.4cm) anti-aircraft gun elevating gear for Vickers-Armstrongs, and also pontoons for the Ministry of Supply.

For the aircraft industry. Motor Pressings manufactured Rotol airscrews for both Spitfires and Hurricanes. There was a variety of different airscrews, three blade, four blade, five blade contra-rotating, and three blade twin airscrews. These were all formed in an hydraulic press in 7/8" (22.2mm) inch thick material.

1950s An advert referred to John Thompson's 16 subsidiary companies including:

1972 December: The Pressings Division was sold to the Rockwell Standard division of North American Rockwell. The Ettingshall factory employed about 1000 at that time. Rockwell had recently purchased Maudslay Motor Co of Alcester from Leyland Motors; the Pressings Division supplied axle castings to Maudsley [2]. The Aero site was retained by Clarke-Chapman.

1986 Rockwell sold the main Motor Pressing works to the Parkfield Group but retained the Axle bay which was run from Maudslay Motor Co at Alcester and eventually closed on 22nd May 1987. The Parkfield Group was a conglomerate typical of the period. It had two divisions – Manufacturing and Entertainment. Initially it seems not to have done very well with the Thompson division but by 1988 most of the management was replaced and the division regained its feet.

Early in 1990, Parkfield Group tried, but failed, to sell the Pressings and Fabrications section. The Parkfield Group collapsed in July, due to the failure of their Entertainments Division caused by over-investment in video films. The Pressings and Fabrications sector was sold to a management buyout. This became UPF on 31st August. This was basically the chassis making concern and seems to have been initially successful.

Then something went wrong - company had became over-ambitious and plans to expand into Europe built up debts of about £75 million. KPMG were appointed as receivers. They continued production but told Land Rover that they would not supply any further Discovery frames unless they were paid £45 million. After High Court cases they agreed to continue production, with Land Rover taking over some of the debt.

Then GKN stepped in. This group, mostly now based at Telford, included Sankeys. GKN set up a subsidiary called GKN Thompson Chassis Ltd, who agreed with Land Rover and the receivers to buy out UPF. But by then the buildings were in the hands of Advantage West Midlands, a government agency concerned with the development of the region. GKN took a three year lease of the site and, during this short period, invested over £1 million. It was only a short term move and GKN announced that when the current contracts, for Discovery and Vauxhall Frontera chassis ran out, any new contracts would be met at the GKN Autostructures premises at Telford.