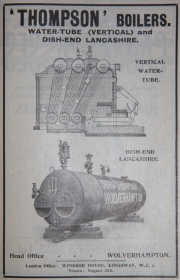 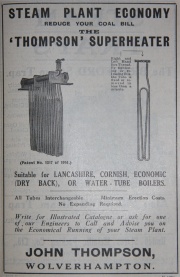 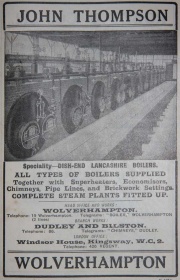 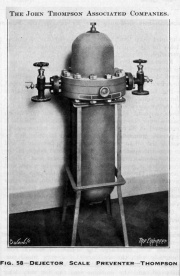 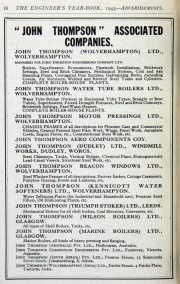 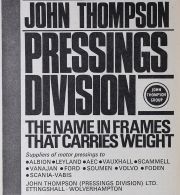 John Thompson was one of the largest industrial enterprises in Wolverhampton and its interests spread world-wide. Its products were mainly boilers and vehicle parts, especially chassis; those core activities led on to many other products. The firm lasted longer than many others, remaining in Wolverhampton until 2004[1]

Sometime between 1834 and 1840, William Thompson established himself as a boilermaker and maker of canal boats at a works situated on the Birmingham Canal, at Highfields near Bilston.

c.1850 The business ran into difficulties and was taken over by William's younger brother, Stephen.

William's son, John, continued to learn his trade under his uncle, Stephen, and became progressively more responsible for running the company.

1860 John Thompson joined his father in partnership under the title of William Thompson and Sons. Their works were at Bilston, Staffordshire.

By 1862, the firm had assumed the name of William Thompson and Son, although John Thompson was the owner and driving force behind it.

1870 The partnership was dissolved and Mr. William Thompson retired. Mr. John Thompson continued the business under his own name. The works were moved to Wolverhampton.

1870 A decision was made to concentrate on the production of steam boilers. This is probably why the firm acquired a new site a few miles along the canal at Ettingshall. The equipment was moved to the new works by canal boat and hand cart.

The works at Highfields continued to be operated. William, the oldest son of William the founder of the firm, may have been in charge although John seems to have been Managing Director.

During the last quarter of the nineteenth century the firm built a considerable reputation. As it was rapidly expanding, a new Head Office on Millfields Road was constructed around the turn of the century.

c.1904 Until the turn of the century the company appears to have concentrated on boilers but, about 1904, a separate Motor Frame Department was set up, apparently on Stephen John's initiative, in a corner of the boiler works flue shop. It was created to manufacture chassis frames and pressings for the expanding motor industry. This department was later to become John Thompson Motor Pressings Ltd.

1909 John Thompson died whilst returning from a trip to Egypt, Greece and Palestine. By this time his sons, William, Stephen John, James and Albert, were taking leading roles in the company. They, and their sons in turn, ran, and mostly owned, the company for much of the twentieth century. Stephen John became a director and a Governing Director in 1912.

1912 Exhibited at the International Engineering and Machinery Exhibition at Olympia. Items shown included a water softening plant on the Kennicott system at work on the stand, and exhibits illustrating the construction of Thompson boilers with dished ends and corrugated tubes, and also a Thompson Mars bent tube superheater, and Thompson Mars economizer[6].

By 1914 the firm was divided into four departments:

WWI. During the War, William and Stephen John were on active service, leaving James and Albert to run the company, which was heavily involved in war work. The motor frame section was at full pitch and other sections were making such things as steel cowls for Sopwith aircraft; engine plates and cowls for Sunbeam aero engines; sponsons for tanks; and cordite boxes.

1915 The Motor Pressings Department moved from the boiler works into a new factory in Davis Street, which had been built on farm land. This Department met with outstanding success, supplying frames to just about every car manufacturer, including the local firms Star Engineering Co, A. J. Stevens and the Turner Manufacturing Co.

1918 After the war, the company underwent a radical reorganisation and, rather belatedly compared with other companies of a similar size, became incorporated as a limited company. James Thompson, grandson of William Thompson, became the first chairman.

1919 The company took over Taylor Windows of Shepherd Street, Wolverhampton and formed the Beacon Windows Co to carry on the business, building new works to do so. This company was run as a separate company until it was amalgamated with Motor Pressings in December 1966 to form John Thompson Pressings Division.

1920 As the company continued to expand, so did their range of products and services.

1924 Annual meeting of John Thompson (Wolverhampton) Ltd at its headquarters in Wolverhampton and also the 3 separate companies. W. J. Thompson was in the chair. Business had been very successful and profitable and the company was expanding. Experience with employees as shareholders had been an unqualified success[9].

1933 Acquired 80% of the shares in Wilson Boilermakers Ltd of Glasgow.

1936 Public company, John Thompson Engineering Co, was formed with a share capital of £1 million, to acquire the business and assets of John Thompson (Wolverhampton) Ltd and buy the shares of the associated Thompson companies (which became subsidiaries of the new company) as well as the 80% of the shares in Wilson Boilermakers Ltd that it owned. Albert Edward Thompson (b. 1866) was the first chairman. Other directors were William John, Stephen John and Edward Walter Thompson[12].

WWII: Each part of the business was involved in manufacturing for the war effort (see separate companies). At Aero Components there was a tremendous amount of activity - sets of tank ribs for the Blenheim bomber and other aircraft, containers for food drops from aircraft, seats for air gunners, gun covers and exhaust pipes. There were also rudder balance arm masts for Wellington bombers, anchor cable containers for Walrus amphibians, Gloster Gladiator gun covers, sea markers and practice bomb simulators.

Because of the activity for the various ministries, many resident ministry inspectors were based at Thompsons to monitor the high degree of quality required. Apart from working overtime to meet the production targets, the men were also engaged in fire watching or in the Home Guard.

1943 The number of subsidiary companies listed in the annual report was 15[15].

Post-WWII. Following the War, changes in technology led to a fall-off in automotive and aircraft work and there was a move towards the construction industry and its associated products, such as concrete mixers, digger buckets, stillages, etc.

1948 The factory expanded to the other side of the railway, indicating that the company’s post-war recovery had been rapid.

1950 The small marine boiler factory in Glasgow was closed and the work transferred to the nearby Wilson Boilers plant. Although work in general had increased, some large contracts would not be delivered for several years, which represented work that was "uninvoiced" at the time of the annual report[17].

1954 Industrial Atomic Energy Group established in Manchester jointly by AEI and John Thompson to research the development of a larger atomic energy reactor[18].

1955 Four industrial groups formed to exploit the information being made available by UKAEA on design of nuclear power "furnaces" - Industrial Atomic Energy Group involving AEI and John Thompson with electrical generating expertise from Metropolitan-Vickers and BTH. Other groups were English Electric Co and Babcock and Wilcox; C. A. Parsons and Co and Head, Wrightson and Co; GEC and Simon-CarvesLtd[20].

During the late 50s and 60s the company produced a great variety of products including thousands of washing machines bowls for Hotpoint and Servis.

An advert referred to 16 subsidiary companies and the companies (or maybe some of them) which made up the group:

All of them “undertake complete boiler contracts of all types”.

1959 An advert from the handbook listed all the subsidiary companies but featured an artist's impression of Berkeley Nuclear Power Station. The list of companies showed 20 subsidiaries, including two in South Africa, two in India (in Calcutta and Bombay) and one in Canada. It also mentioned John Thompson Ordnance Co of Wolverhampton, apparently a foray into the arms industry.

1959 Considerable fall in profit due to pressure on margins on long-term contracts and increased cost base including research and development despite working at full capacity in recent years. John Thompson had taken over Thompson Brothers (Bilston) in the past year, a business in similar line (This company seems to have been set up by brothers of one of the early Thompsons in the John Thompson line, and the directors of the two companies were, during the first half the 20th century, cousins). New orders not being gained as fast as previous years[23].

1962 In an advert, the company is one of the members of the Nuclear Power Group which is constructing nuclear power stations at Berkeley, Bradwell, Dungeness and Latina (Italy). In the Handbook, John Thompson Compost Plant Ltd added to the list of subsidiaries, said to be “specially concerned with the problem of municipal waste and is installing plant in Djakarta, Indonesia.” As they are not mentioned again it is likely this company was formed for this one contract.

The company also had a division at Gloucester called Thompson Trailmobile, producing semi-trailers and containers for bulk transport by road, rail and sea.

One of the largest de-coring plants in operation at John Thompson (Pressure Vessel Division) at Wolverhampton. The plant was supplied by Spencer and Halstead.

1968 Only 30% of the business was now concerned with UK power generation work. Took over Horseley Bridge and Thomas Piggott which was merged with the Pressure Vessel Division to form Thompson Horseley[25].

1969 Acquired the newly-merged shell boiler business of Cochran and Co and Ruston and Hornsby which would give John Thompson half of the UK market for industrial packaged boilers[26]; the Annan and Lincoln works were merged with the Shell Boiler Division, eventually forming Thompson Cochran[27].

1970 The Thompson family no longer had any involvement in the John Thompson company.

1970 Clarke, Chapman and Co took over the Thompson Group with the support of the Industrial Reorganisation Corporation; the new company was called Clarke Chapman-John Thompson [28].

1972 The Pressings Division was sold to Rockwell Standard of America. From January 1973, it became Rockwell Thompson Ltd.

After Rockwell bought the Pressings Division from Clarke Chapman it operated under their control until 1986 when they sold the main works to the Parkfield Group but retained the Axle bay. The Aero site was retained by Clarke, Chapman and Co.

1977 Clarke, Chapman and Co merged with Reyrolle Parsons of Newcastle to form a new company, Northern Engineering Industries, which thereby incorporated parts of John Thompson. The Thompson Brothers part of the organisation, and their works at Bilston, was renamed Thompson Commercial Vehicles.