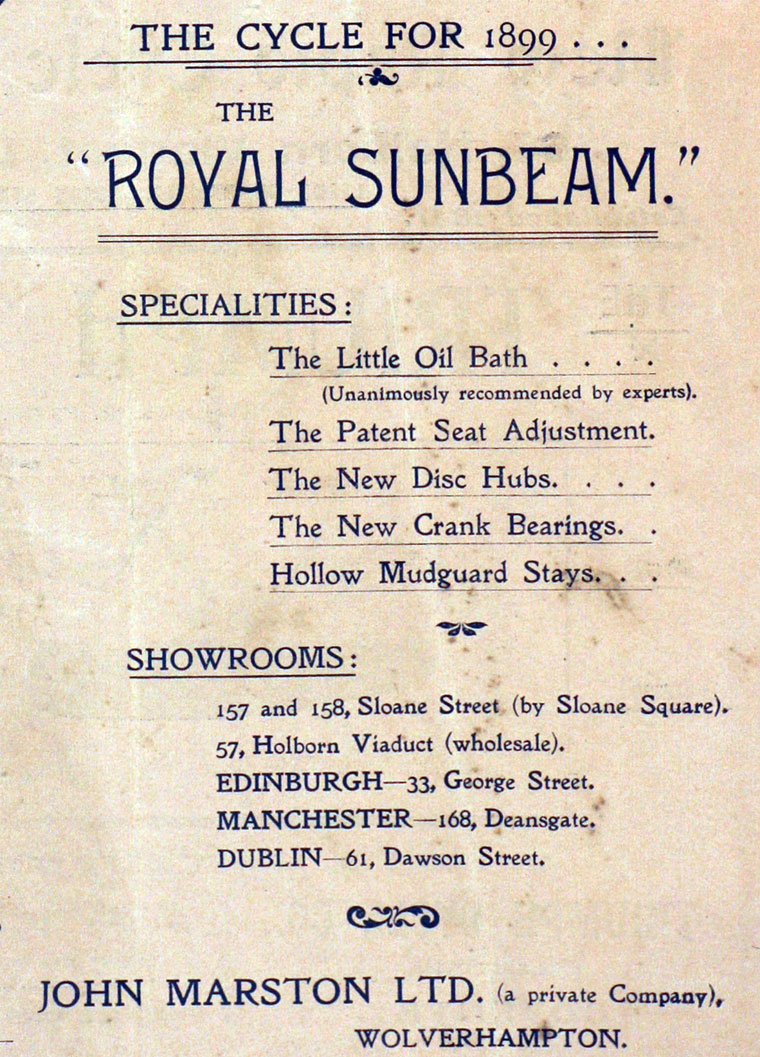 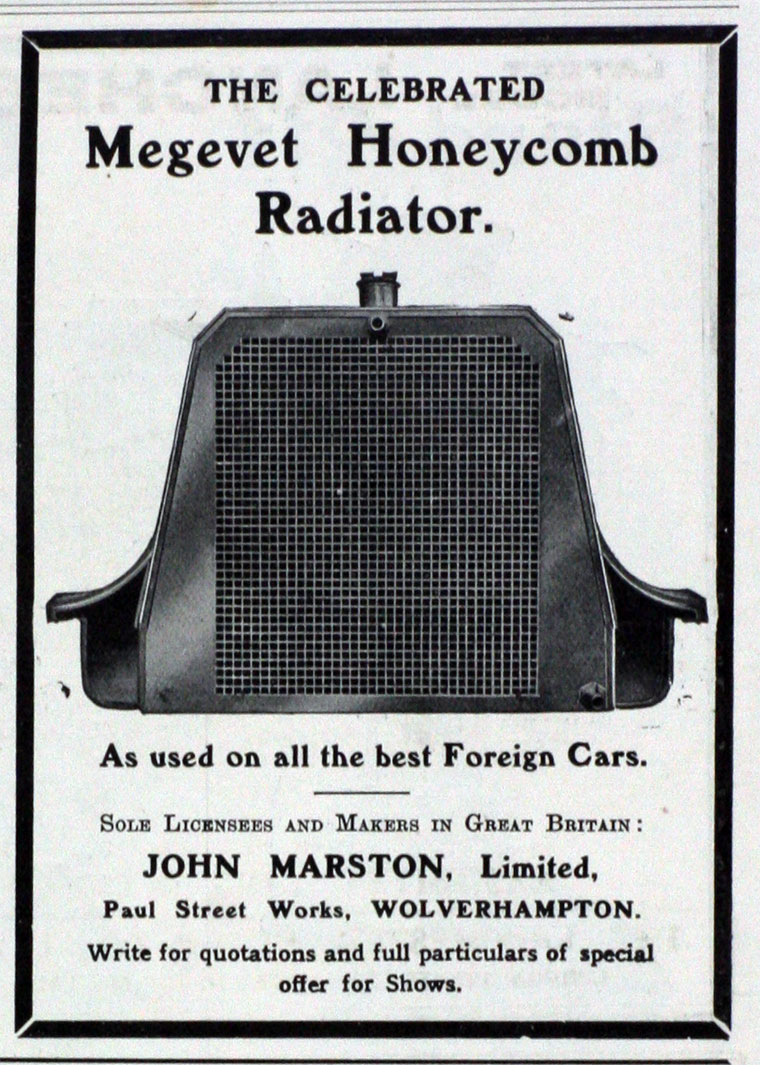 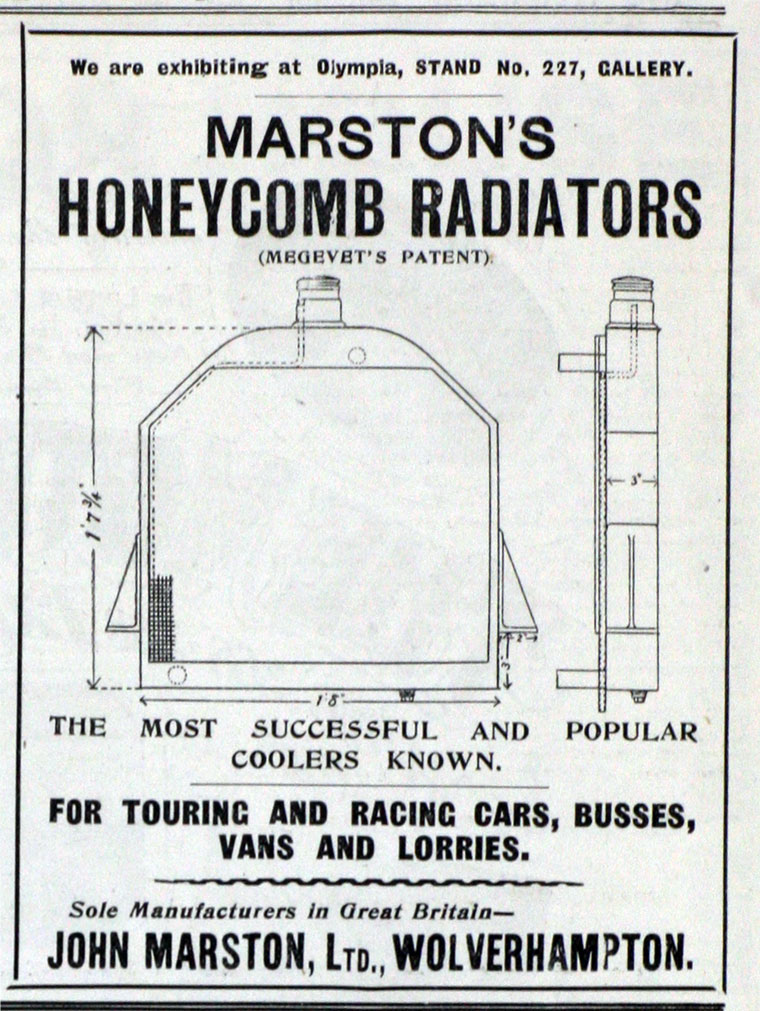 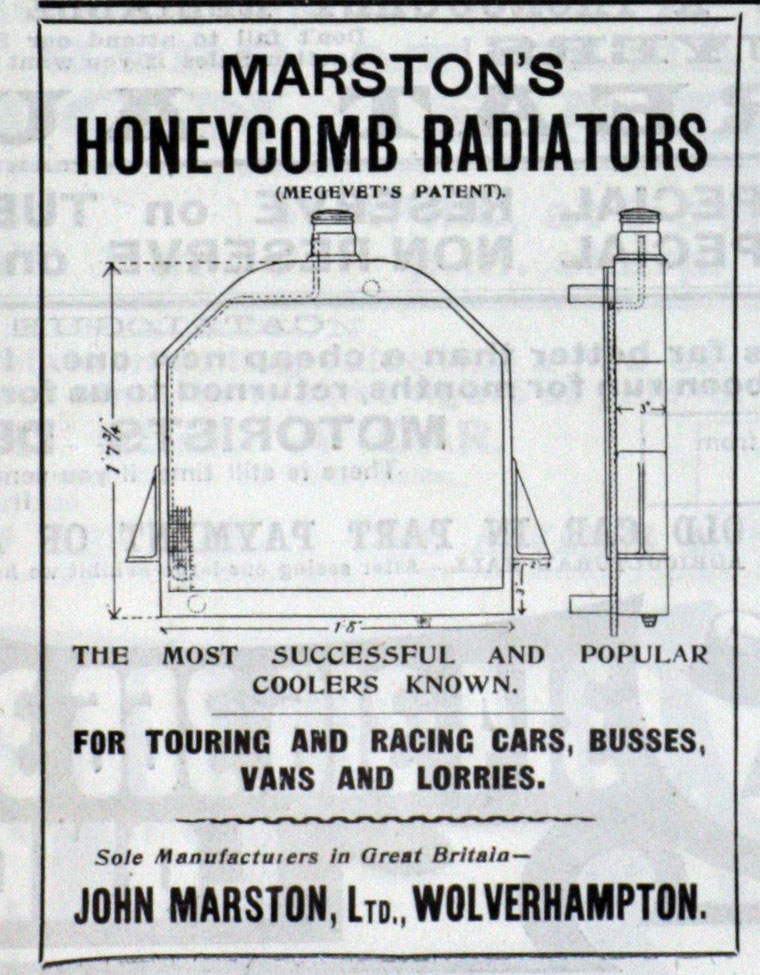 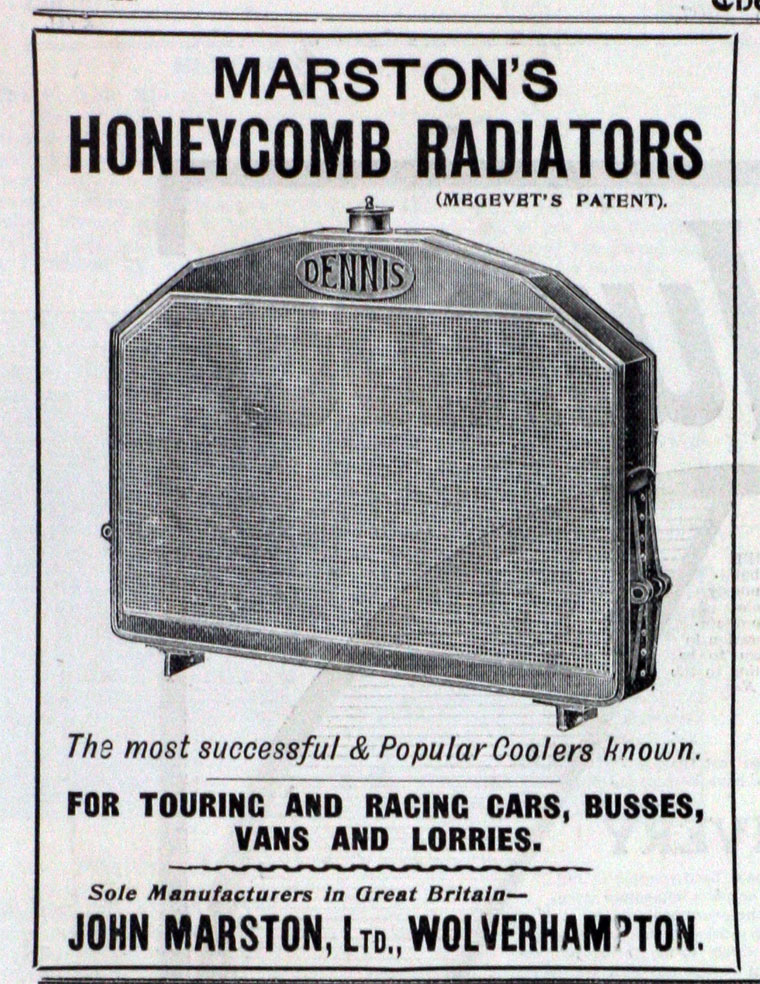 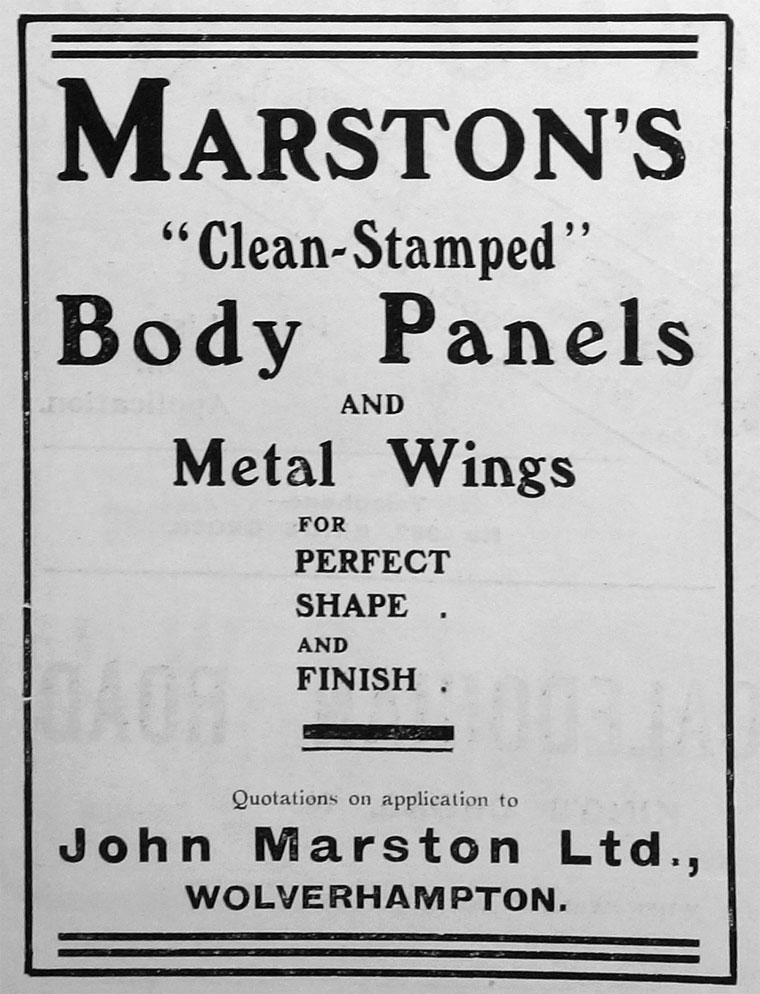 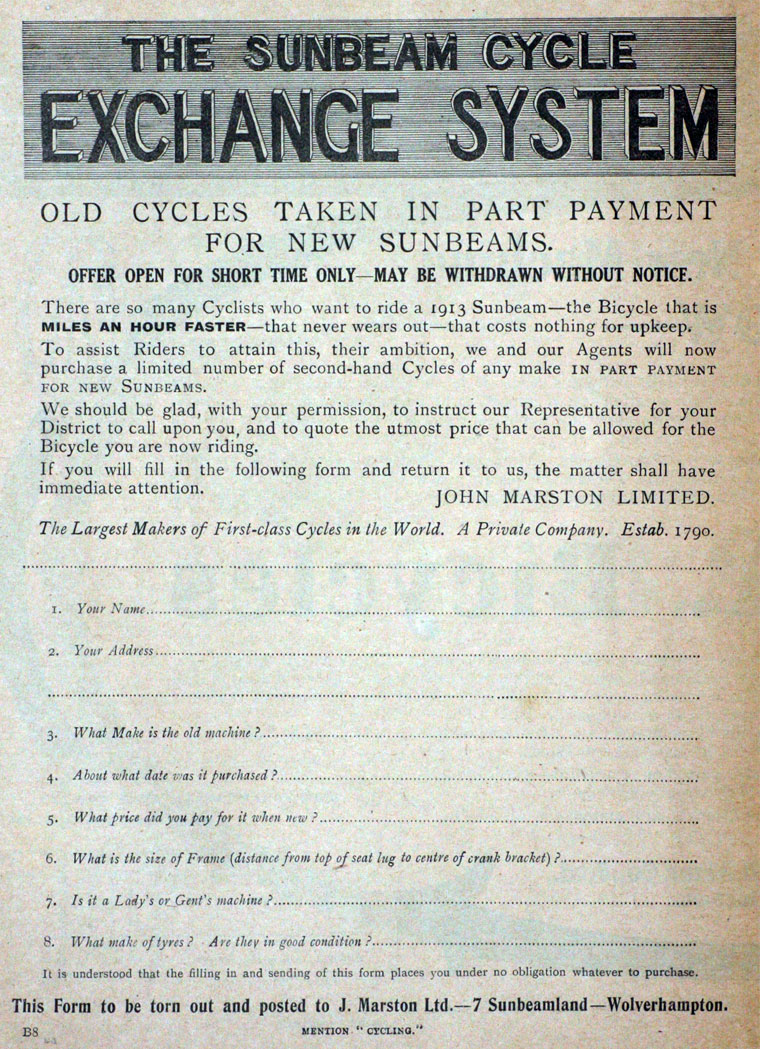 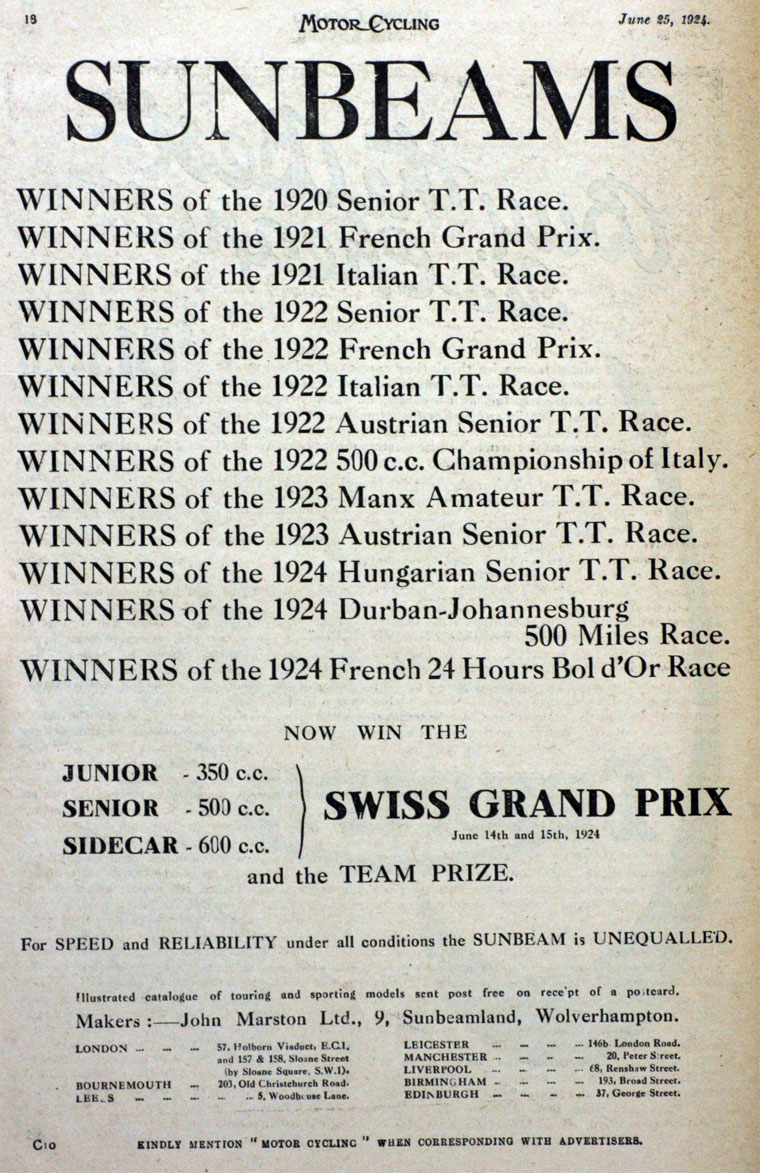 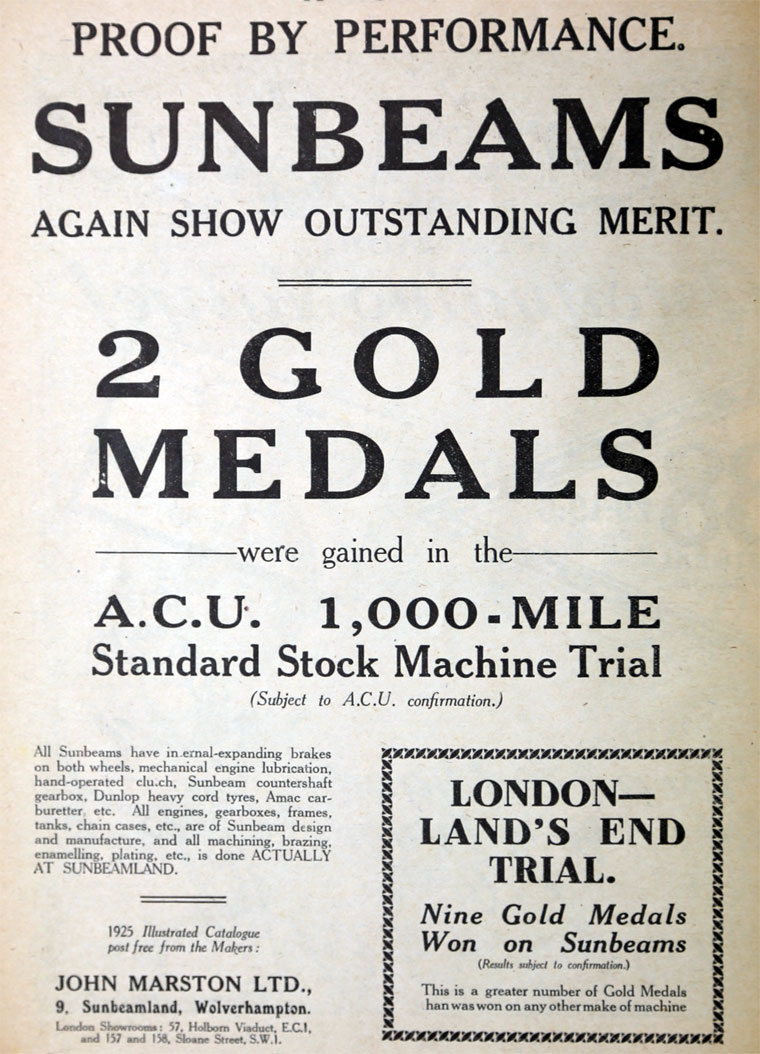 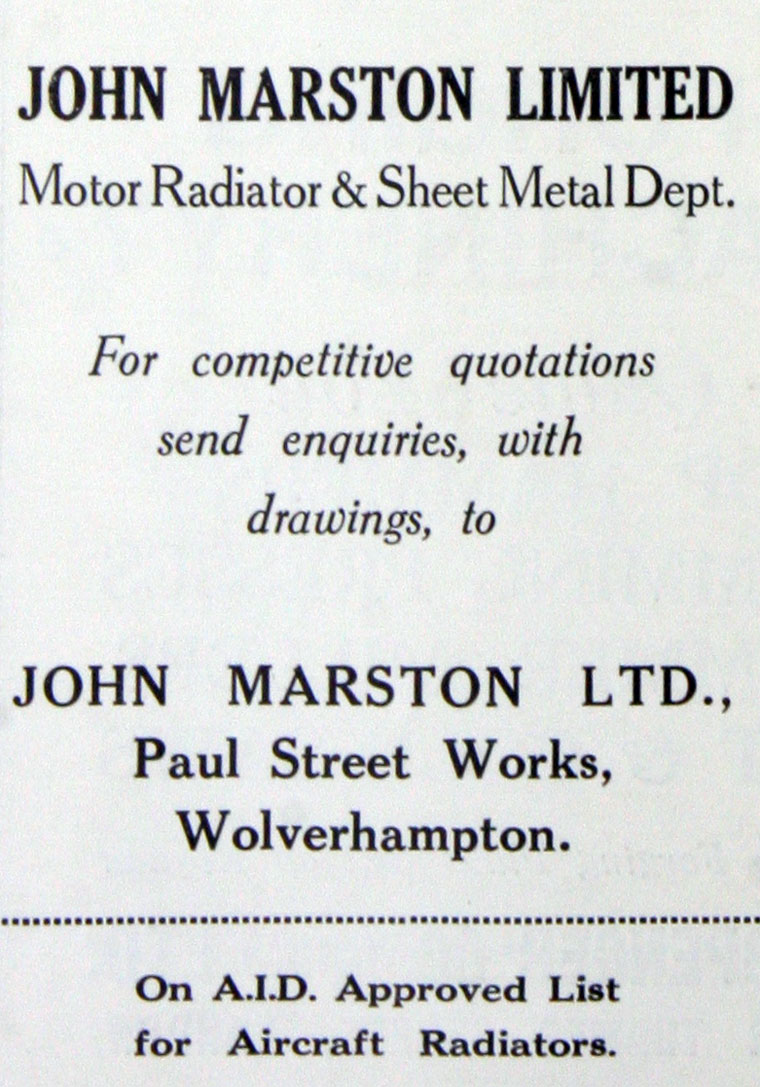 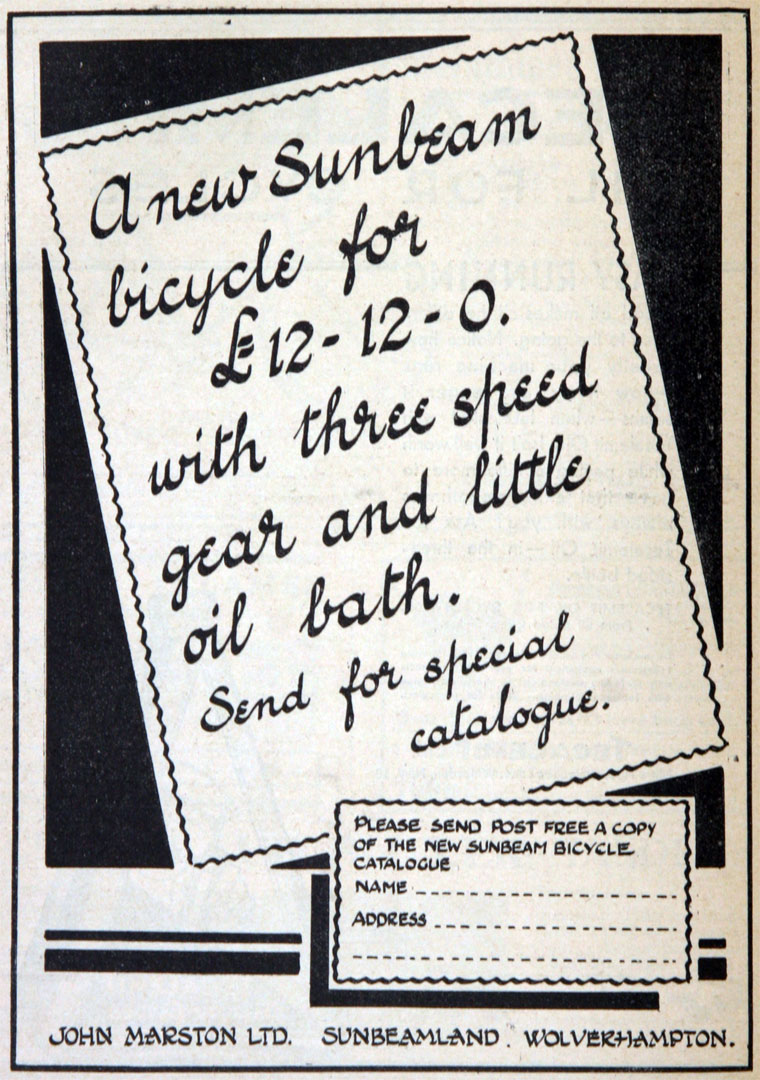 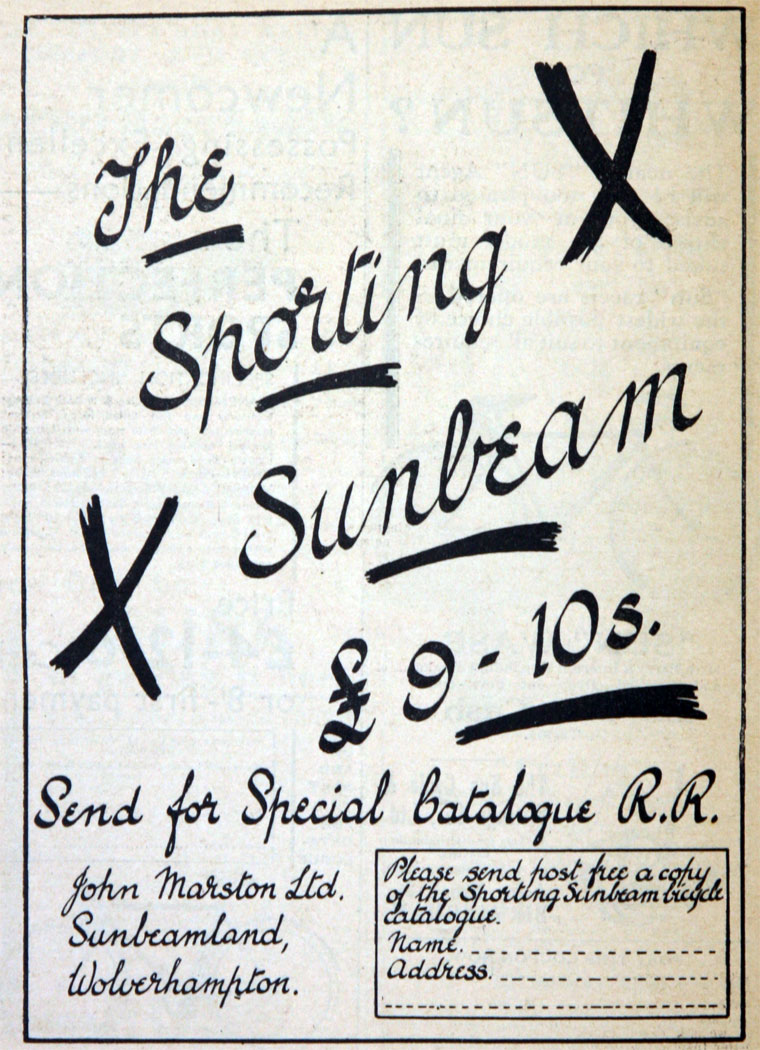 of Sunbeamland, Wolverhampton, engineers and manufacturers of Sunbeam cycles, cars and motorcycles, as well as japanware in the early years.

1851 John Marston was apprenticed to Edward Perry, tin plate worker and japanner at the Jeddo Works of Wolverhampton as a japanner (metal lacquerer).

1859 At age 23, he bought two existing tinplate manufacturers and set up on his own as John Marston Ltd, making any and every sort of domestic article. Another source says: When his apprenticeship ended he purchased the Daniel Smith Lester (died 1858) japanning business at Bilston.[1]

1871 He did so well that when Edward Perry died, Marston took over his Paul Street Works, the iron and tin smithing and japanning business, and incorporated it using his own name - John Marston and Co Ltd.

1887 Marston was a keen cyclist and tried building his own cycle. William Newill, the works foreman, built a special cycle for John at the Paul Street works. John was pleased with the bicycle and the story is told that John's wife, Ellen, saw the sun reflected in the high gloss finish, and so the bicycle was called 'The Sunbeam'. John initially intended to make only tricycles but, at the time, the modern safety bicycles were all the rage and so most Sunbeam cycles were of this type. In the middle of the year, John asked one of his men to estimate the cost of going into the bicycle business. By December the first Sunbeam bicycle had been produced.

1887 the first Sunbeam bicycle had been turned out at the works.

He gave William Newill a partnership, and the company began to change direction from making pots and pans to engineering.

1888 The Paul Street works first became known as Sunbeamland in 1888 and Thomas Cureton, joined the company as an apprentice.

1895 Incorporated as a Limited Company.

1896 Issued a catalogue for "Koh-i-noor Letters and Artistic Advertising". These appear to have been individual letters as well as complete signs made in copper.

1898 Purchased the Villiers Street factory of Edward Bullivant, a tinner and japanner. A new company was set up there Villiers Cycle Components Co to make pedals and cycle components for Sunbeam using patterns obtained from the USA, using machine tools developed using US specifications. As the factory was producing more parts than Sunbeam required, Villiers also sold components to other manufacturers.

1899 Autumn. Made a 5 h.p. single-cylinder dogcart. [5] Marston was encouraged in this by Thomas Cureton his right-hand man

1902 the remaining metalware and japanning part of the business was sold to Orme, Evans and Co to enable Sunbeam to concentrate solely on vehicle production. The Villiers Cycle Components Co was sold to John's son Charles.

1903 Entered a 'cylinder Sunbeam car' in the Glasgow to London motor trial. [7]

1904 Production began of a Thomas Pullinger-designed car, based on the Berliet mechanicals.

1905 The cars sold quite well and, rather than expand the existing business, the decision was taken to turn set up a separate company to handle the demand by focussing on cars. In March 1905 the Sunbeam Motor Car Company Ltd was formed with a starting capital of £40,000; John Marston was Chairman. Cars were made at Moorfield Works, off Villiers Street, with satellite factories at Owen Road, Temple Street, and Ablow Street, where components including radiators were made.

1912 John Marston was seventy-six years old when he ventured into the field of motorcycles with his Gentleman's motor bicycle. The first Sunbeam model was designed by Harry Stevens (of the AJS Stevens family) on modern-but-conventional lines and with a 2.75 hp engine. The chain transmission was enclosed by the Sunbeam 'Little Oil Bath Chain Case'. Finished to the usual Sunbeam high standards, it was prepared for production by John Greenwood, who was the Engineering Director at Sunbeamland until the 1930s.

In 1914 John Marston Ltd is listed at 16 London Road, Leicester as a motorcycle manufacturer with H. F. Bateman as the manager.

In 1916 they were listed at the same address with F. W. Southern as manager.

1918 This was a very tragic year for the Marston family. Firstly, the eldest son died, followed by his father the day after the funeral and his mother a few days later. It was to affect the firm deeply and the company entered the following decade in the control of others.

c.1920 Facing a claim for death duties arising from the death of his father, Charles sold his shares in John Marston Ltd.

1919-1920 John Marston Ltd the manufacturers of the Sunbeam cycle and motorcycle was purchased by Kynoch which was part of Nobel Industries [9].

ICI retained the works in Wolverhampton for production of car radiators.