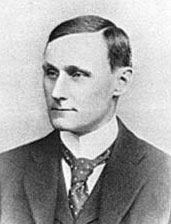 1899. The glider in which Percy Pilcher died.

Replica. Exhibit at the Glasgow Museum of Transport. 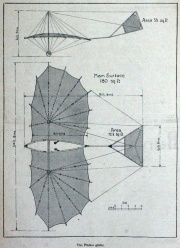 The Pilcher Triplane replica built at Cranfield. Exhibit at the Shuttleworth Collection.

Percy Sinclair Pilcher (1867-1899) was a British inventor and pioneer aviator who, in one of the big "what if" events of history, could well have become the first person to achieve controlled, powered, heavier-than-air flight well before the Wright brothers had he not been killed in a glider accident.

1867 January 16th. Born in Bath, the youngest in the family of three sons and two daughters of Thomas Webb Pilcher (1799–1874), formerly curator of the British Museum picture gallery in Rome, and his second wife, Sophia Robinson.

In 1874 when he was 7 years old, Pilcher's father died, leaving less than £600. Sophia took her four surviving children (one son had died in childhood) to Celle, near Hanover in Germany, where she died in 1877.

Percy was 10 years old when Thomas David Pilcher, the head of the family at nineteen, brought his sisters and brother back to England and sent them to school.

In 1880 aged 13 years Percy entered the Royal Navy as a cadet and served for seven years.

In 1887 aged 20 he resigned at his own request to go to Glasgow to begin an apprenticeship in the engineering department of the shipbuilders Randolph, Elder and Co. A fellow worker later decribed him as 'a pale serious fellow, with a great bent for invention, and a brain that was raxor keen.'

He left Randolph, Elder on 8 July 1889, and spent 5 months as an apprentice moulder at Cairns and Co of Glasgow.

For a short time in 1890 he attended classes at University College, London, but was not enrolled as a student.

In about May 1890 he started work in the engine department drawing office of Southampton Naval Works Co at Woolston, managed by John Harvard Biles.

1891 Pilcher followed John Biles to Glasgow following Biles's appointment as part-time Elder Professor of naval architecture at Glasgow University. Pilcher began work as assistant lecturer at Glasgow University, and carried out tests on the resistance of different hull shapes. He also worked as draughtsman at J. and G. Thomson of Clydebank.

He took a growing interest in aviation, and built and tested model gliders in the lodgings in Byres Road that he shared with his sister Ella. Objections from his landlady led to a move to Kersland Street, and he was also given the use of a large room at the university at times when the university was closed.

He built a hang glider called The Bat which he flew for the first time in 1895. The airframe was mostly Riga pine, and the wing fabric was 'nainsook', sewn by his sister Ella, who was a staunch supporter of his experiments. The Bat had a double use of the triangle control frame (TCF) (or A-frame for hang gliders, trikes, and ultralights) as both a piloting device as well as an airframe part that doubled in kingposting utility.

Later that year Pilcher met Otto Lilienthal, who was the leading expert in gliding in Germany. These discussions led to Pilcher building two more gliders, The Beetle and The Gull.

In December 1895 Pilcher received a letter from Lawrence Hargrave, an aviation pioneer in Australia, containing constructive and helpful suggestions, and further correspondence ensued.

1896 Pilcher resigned his post at Glasgow University and went to assist Hiram Maxim at the Maxim Nordenfeld Guns and Ammunition Co.

1897 Based on the work of Lilienthal, Pilcher built a glider called The Hawk with which he broke the world distance record when he flew 820 feet at the grounds of Stanford Hall (Lutterworth) in Leicestershire.

Pilcher set his sights upon powered flight: he developed a triplane that was to be powered by a 4 hp engine; however, construction of the triplane put him heavily into debt, and Pilcher needed sponsorship to complete his work.

1897 Founded the company Wilson-Pilcher with Walter Gordon Wilson[2] with the objective of building what might have been the world's first (combustion) aero-engine.

1899 September 30th. Having completed his triplane, he had intended to demonstrate it to a group of onlookers and potential sponsors in a field near Stanford Hall. Days before, the engine crankshaft had broken and, so as not to disappoint his guests, he decided to fly the Hawk instead. The weather was stormy and rainy, but by 4 pm Pilcher decided the weather was good enough to fly. Whilst flying, the tail snapped and Pilcher plunged 30 feet to the ground: he died two days later from his injuries with his triplane having never been publicly flown.

1899 October. Inquest. 'At Stanford Hall, the seat of Lord Braye, an inquest was held last evening on the body of Mr. Percy Pilcher, who waa killed while experimenting with an aerial machine on Saturday. The Hon. Verney Cave, son of Lord Braye, stated that the accident was due to the snapping of a cross-bar, which caused the wings of the machine to fold up and collapse. There was a strong wind, but that was an advantage rather than otherwise. It was stated that Mr. Pilcher had previously made four successful ascents with the same machine at Stanford Hall. Lord Braye said he was somewhat opposed to the experiment being made, but Mr. Pilcher was anxious that the trial should take place because the party present included Mr. Henniker Heaton, M.P., who was much interested in the invention. The Jury considered that all proper precautions were taken, and returned a verdict of accidental death.'[3]

1899 November. Report. 'A flying machine fatality is recorded, the victim being Lieutenant Percy Pilcher, R.N., who was giving an exhibition of his soaring machine at Stanford Hall, Lutterworth the seat of Earl Braye, on Saturday. The flying machine used was a canvas spread frame in imitation of the outstretched wings and tail of bird, within the framework of which the operator took his stand. The machine operated as a gigantic kite, resistance to the wind for elevation being obtained by attachment to a long cord, worked by a couple of horses. The machine attained some 30 feet in height when the cord snapped, and Lieutenant Pitcher alighted gradually and safely his feet, the extended wings easing the descent. A second attempt was presently made, and the machine appeared to sail well, and to soar to about 50 feet elevation, when suddenly it turned unexpectedly over and came down heavily in the park with a crash that could be heard some hundreds of yards. Lieutenant Pilcher sustained severe concussion of the brain and compound fracture of the thigh, and died early Monday morning without having recovered consciousness. The apparent cause of the aeronaut's fall was the sudden fracture, while aloft, of a bamboo stick which "spread" the tail," on which the machine depends for balance. The saturation of the canvas caused the webbing to contract, until the slight bamboo spreader could no longer sustain the strain upon it.'[4]

He is buried in Brompton Cemetery, London. He was unmarried and aged just 32 years.

A stone monument to him stands in the field near Stanford Hall at the point where he crashed, and a full sized replica of his "The Hawk" glider is also displayed at Stanford Hall.

Pilcher's plans were lost for many years but some correspondence was found in a private American collection. From this it was possible to discern the general direction of his plans and the basis of his design. Pilcher had worked out how to produce lift using wing-like structures, but many elements were still missing. In particular, Pilcher was stuck trying to design a wing that could lift the weight of an engine, the aircraft and the occupant with each increase in wing area increasing the weight so much that yet more lift was required, requiring a larger wing.

Pilcher's breakthrough, thanks to correspondence with another pioneer, Octave Chanute, was to stack smaller, lighter wings one atop the other in an arrangement we know today as the biplane or triplane. This allowed the wings to generate much more lift without a corresponding increase in weight. However Pilcher was not first to discover and employ a multi-plane wing for aircraft. George Cayley, in about 1849, designed and built what was most likely the first triplane.

In 2003, a research effort carried out at the School of Aeronautics at Cranfield University, has shown that Pilcher's design was more or less workable, and had he and Wilson been able to implement the engine design, it is likely he would have succeeded in being the first to fly a heavier-than-air, powered aircraft under control. A replica of Pilcher's aircraft was built, and after some problems, achieved a sustained controlled flight of 1 minute and 26 seconds, significantly longer than the Wright Brothers' first flight.

As a branch of automobilism, aeronautics has not greatly advanced in Great Britain, although the subject is being studied by a large number of members of the French Automobile Club. One of the leading and most promising aeromobilists in this country was Mr. Pilcher, who has met with a most untimely death. He had been associated with Mr. Hiram S. Maxim in the development of the flying machine, and was making a trip in one on the 30th ult. at Rugby. When he had reached an altitude of about 50 feet, the attachment of one of the aeroplanes was carried away, and the machine and its occupant fell heavily, Mr. Pilcher, who had sustained severe injuries, succumbing.

Mr. Filcher was a young man of exceeding promise; formerly he was an officer in the Royal Navy, and attained, we believe, the rank of sub-lieutenant. Recognising, as do most of the more advanced naval officers, that if he wished to become a modern scientific seaman he must become an engineer, Mr. Filcher studied naval architecture and marine engineering at Glasgow University under Professor Biles. He was for his knowledge and experience selected by Mr. H. S. Maxim, the well-known automobilist, to assist him in his scientific experiments at Baldwin Park. He saw his way, in conjunction with that great inventor, to the practical perfection of the flying machine, when his career was terminated as described.

We, as automobilists, deplore his death, and in him automobilism and practical applied science loses an enthusiastic and devoted student. A contemporary truly says :— "Mr. Pilcher, in all he undertook, manifested indefatigable energy, with indomitable courage and perseverance. To his versatile knowledge and high character was added great charm of manner".