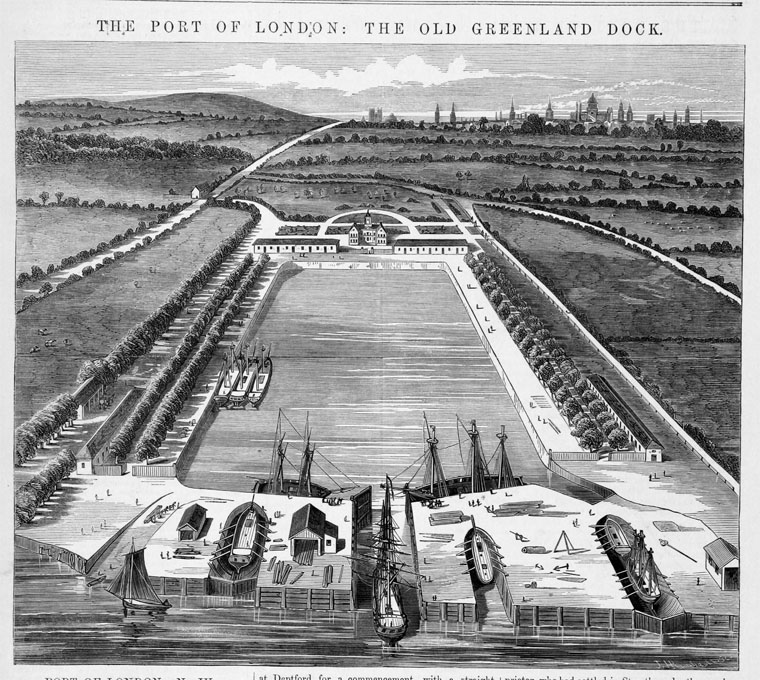 London has been a port for many centuries. In Tudor times, London merchants and financiers took advantage of the problems faced by its continental rivals to establish the City as the commercial and financial centre of the world. At the same time transhipment trading grew up, which subsequently became a feature of the activities of the Port and City of London.

In the 17th century, the Hudson’s Bay Company was formed - 2 ships, the Nonsuch and the Eaglet, were despatched from Gravesend to explore the territory around Hudson Bay in 1668. The subsequent association of Canada with the Port of London continued for many years. At this time, the large vessels of the East India Company anchored off Blackwall, their cargoes being transferred to the legal quays in the Pool of London by barges. About the middle of the seventeenth century the Company constructed a small wet dock at Blackwall for fitting out their vessels after launching from the adjacent shipbuilding yards. This dock was the first on the Thames to be fitted with gates. This dock was later incorporated in the Brunswick Dock which in turn was absorbed by the East India Dock.

1665 The plague temporarily strangled the trade of the Port and the Great Fire destroyed practically the whole of the wharf and warehouse accommodation. A tax of 1/- a chaldron was levied on coal brought into the Port to help defray the cost of rebuilding London, including new port accommodation on improved lines.

1696 The Royal Assent was given on the 10th April to a bill for the construction of a wet dock at Rotherhithe, some 10 acres in extent, which was called the Howland Great Wet Dock after a Streatham family to whom the property belonged. The dock was built as a harbourage and fitting-out place for ships rather than for commercial purposes. This became the nucleus of the Surrey Commercial Docks system.

By the late 18th century 1,775 vessels were being allowed to moor in the Upper Pool in a space adapted for about 545. The great increase in the volume of trade had brought into being a large number of ships of relatively small carrying capacity. In addition about 3,500 craft were employed to convey cargoes from the moorings to the wharves. The extent of the quays or wharves on which goods were allowed to be deposited was wholly inadequate so goods often remained for weeks at a time in lighters before they could be dealt with; this exposed them to the attacks of the weather and the depredations of river thieves.

1796 Eventually a Parliamentary Committee was "appointed to enquire into the best mode of providing sufficient accommodation for the increased trade and shipping of the Port."

1799 Parliament authorised the construction of a dock on the Isle of Dogs "for rendering more commodious and better regulating the Port of London" and in particular to secure that "West India produce might be effectually secure from loss by theft or other causes and the public revenue greatly benefited." The Bill was promoted by the West India Merchants in conjunction with the Corporation of London - the Company was granted a monopoly for twenty-one years to unload all West India produce brought into the Port and all exports to the West Indies were also required to be loaded in their docks. Another clause gave the right to wharfingers and lightermen to send lighters and craft into the docks to collect goods for the riverside wharves or to deliver exports to ships in the dock without payment of dues. The latter became known as the "Free Water Clause," and, retained in all subsequent legislation relating to dock construction, has influenced the affairs of the Port to a marked degree.

1801 The Grand Surrey Canal Co was formed to execute an ambitious scheme to connect the Thames at Rotherhithe with Portsmouth by way of Deptford, Peckham, Clapham, Croydon, Kingston, Ewell and Epsom but only about four miles of the canal were actually constructed.

1802 The West India Docks were formally opened by the Prime Minister, Henry Addington, on 22nd August.

1805 Under the West India Docks Act the Corporation of London obtained powers to construct a canal from Limehouse Reach to Blackwall Reach, the idea being to save vessels time and risk in navigating the reaches of the river round the Isle of Dogs. The City Canal, as it was called, was opened in 1805. It was not a financial success and was bought in 1829 by the West India Docks Company and transformed into a timber dock. Years later it was enlarged and named the South West India Dock.

1805 The London Dock at Wapping was already under construction before the West India Docks were opened; the London dock itself was opened in 1805. The Company had a twenty-one years monopoly to receive all vessels entering the Port with tobacco, rice, wine and brandy (except from the East and West Indies). They were the closest docks to the City of London, until St. Katharine Docks was built two decades later.

Many of the new docks were on the north bank of the river but developments also took place at Rotherhithe - the Howland Great Wet Dock was equipped with boilers, tanks, etc., for extracting sperm oil from blubber brought in by whaling fleets and its name was changed to Greenland Dock. The property changed hands in 1806 and the dock was used for North European trade in timber deals, tar, corn, etc.

Other docks were built, over a period, in the neighbourhood and all eventually passed to the proprietorship of the Surrey Commercial Docks Company. The Surrey Commercial Docks were the only docks on the south side of the river and with the exception of the Greenland Dock and South Dock in which general cargo from many countries was handled, they were all devoted to the handling and storage of timber.

The steamship made its first appearance on the Thames in 1815, but it was not until 1875 that sailing ships were definitely relegated to second place in the tonnage of vessels that used the Port.

The increasing size of ships in the mid-19th century led to expansion of the Port of London’s facilities and changes in its administration.

1850 A Company was formed and an Act of Parliament obtained for the making of a dock downstream from the then existing docks which would be more convenient for the deeper-drafted vessels. This dock, the Victoria Dock, incorporated several new features compared with its predecessors - jetties projected into the dock from the main quays, the idea being to effect quick delivery of cargoes, after sorting into barges on the opposite side of the jetty to which the ship was berthed. The Victoria Dock was the first in the Port to be directly connected with the railways of the United Kingdom and the first to be equipped with hydraulic machinery.

1857 The large body of watermen and lightermen resented the introduction of steam tugs and steam passenger boats into the Port and used every device to obstruct them. After years of agitation the Thames Conservancy Act was passed in 1857 which vested in the Conservators all title and rights in the bed, soil and foreshore of the river from Staines to Yantlet Creek and empowered them to carry out all conservancy duties, including the proper regulation of river traffic and the maintenance of the navigation channel.

1868 The Millwall Dock was opened

The London and the St. Katharine Dock Companies combined and also acquired the Victoria Dock.

1874 the London and St. Katharine Docks Company decided to construct the Royal Albert Dock as an extension of the Victoria Dock (which now acquired the prefix "Royal").

1880 The Royal Albert Dock was opened - at the time the largest and finest dock in the world. This provoked the East and West India Docks Company to build the Tilbury Dock which opened in 1886. The chief idea of establishing the Tilbury Dock 26 miles from London was that shipowners would prefer to dock their vessels in close proximity to Gravesend, the well-established point of arrival for ships, as it would save them the time and expense of taking them higher up the river, but shipping was very slow to transfer from the older docks, largely because of boycott by merchants, lightermen and wharfingers.

16th century: Royal Dockyards were established at Deptford and Woolwich by Henry VIII; by the middle of the sixteenth century Deptford was the principal naval shipbuilding yard and store in the Kingdom.

The famous "Blackwallers" were, as the name implies, built at the Blackwall Yard, for the East India Company and other owners. Later on, fast clippers, built in the same yard, were used in the tea trade and in the Australian wool trade. The yard was later operated by R. and H. Green

Maudslay, Sons and Field was the only Thames-based naval engine firm to fulfil naval contracts until about 1835 when orders were given to Barnes and Miller of Ratcliff and Seaward and Capel of Millwall.

1835 Ditchburn and Mare was founded on the east bank of Bow Creek to build ships of iron as well as wood.

c.1844 The Samuda Brothers opened their yard on the Isle of Dogs

1858 Perhaps the best known of the steamships built on the Thames was the Great Eastern, built at Millwall by John Scott Russell and Co; the builders encountered great trouble in launching the ship which was only really successfully employed as a cable-laying ship.

1865/6 Yarrow and Hedley was established at Poplar on the Isle of Dogs to build steam river launches.

1912 The Thunderer, which was launched in 1912, was the Thames’s last contribution to the Royal Navy

Today the industry is confined to lighters, barges, work boats and pleasure craft.