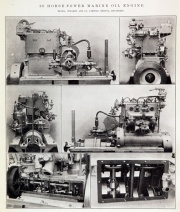 Brazil-Straker of Bristol was a producer of cars and aero engines, of Causeway, Fishponds, Bristol

At some point H. F. Moseley joined the firm

1897 H. G. Holborow joined the firm, and it became Owen, Brazil and Holborow

1906 Fedden's apprenticeship was completed and he immediately designed a complete car. He managed to convince the local firm of Brazil Straker to hire him, and the design was produced as the successful Shamrock.

Fedden remained at Brazil Straker over the following years, and he was particularly influential in convincing company management to take on the repair of various aircraft engines when World War I started.

1911 Combined oil engine and dynamo for the Calcutta Mint

WWI The company's role soon expanded to producing Rolls-Royce Hawk and Falcon engines, as well as major parts of the famous Rolls-Royce Eagle. Henry Royce offered Fedden a senior position with his company but Fedden declined.

1915 Fedden started the design of his own aero engine, along with his draughtsman Leonard Butler. The two were inseparable for the next twenty years; most of their designs were stamped "FB" to indicate the shared credit. They designed two engines during WW1: the 14-cylinder radial Mercury, notable for the cylinders being arranged helically instead of in two rows, and the larger, more conventional, two-row Jupiter design of about 400 hp.

Both were ready for testing in 1918, but there seemed to be little interest at first. In September, however, a Mercury was experimentally fitted to a Bristol Scout, and it dramatically improved performance, easily beating the competing Sunbeam Arab. Bristol then decided to try the Jupiter in their new Badger design, finding that it, too, completely outperformed the competing ABC Dragonfly. Production of both designs for Bristol was to start immediately, but the war ended only days later and the contract was cancelled.

During this period (1919) the aviation portions of Brazil Straker were purchased by Cosmos Engineering, where work on the designs continued.

1920 With the ending of the war, Cosmos had no production designs, and their repair work was quickly dwindling. The company was soon insolvent. Convinced of the quality of the Cosmos designs, the Air Ministry "made it be known" that they would be rather happy if the company were purchased by Bristol, something which eventually took place in 1920.

Sir George White later noted that they acquired Mercury design and seven engines, all the assets of Cosmos, along with Fedden and his design team, all for just £15,000. Even then most sources suggest they only did so after being forced to by the Air Ministry, which is perhaps not surprising given the fragile economy of the era.