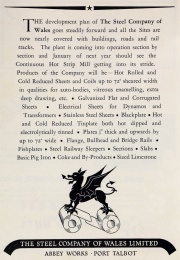 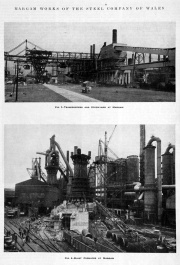 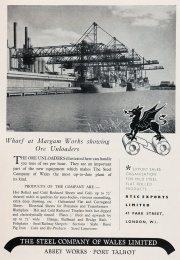 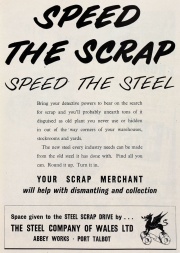 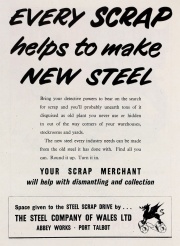 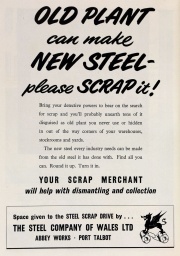 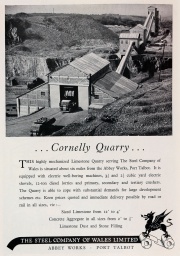 1955. Hot steel strip emerging from the last rolls in a continuous rolling mill.[2] 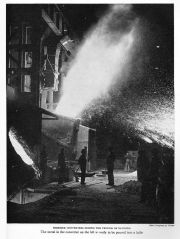 1955. Bessemer converters during the blowing process.[3] 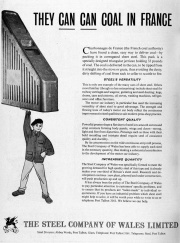 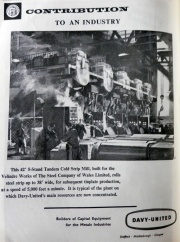 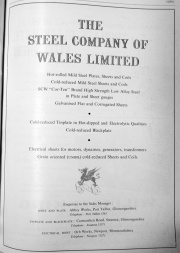 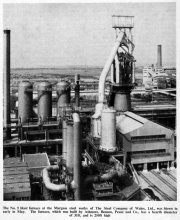 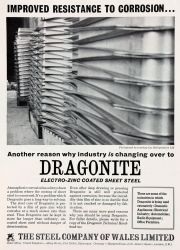 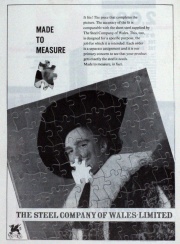 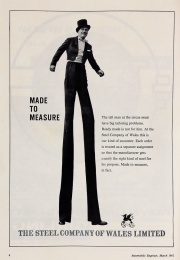 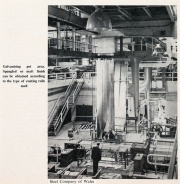 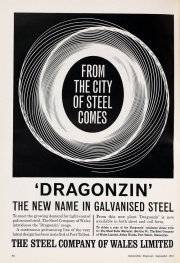 The Steel Company of Wales was formed in 1947 as a public company by British (Guest Keen, Baldwins) Iron and Steel Co, Richard Thomas and Baldwins, Lysaght Works and Llanelli Associated Tinplate to modernise the South Wales sheet and tinplate industry.

1947 Planned to build two tinplate works in the Swansea and Llanelli districts to meet demand and soak up some of the labour made redundant at the old style works. Started clearing the site at Velindre (Swansea) in 1947 but work was put on hold and the site at Trostre (Llanelli) was developed as it was felt that the need for work was greater in the Llanelli area than in north Swansea.

1947 Officially took over the running of Port Talbot/Margam.

1951 Trostre came into production and work on the Velindre site recommenced.

1956 The Velindre works were commissioned when each of the three works operated two modern continuous tinning lines.

1956 Joint sales arrangements, and research and development, with Richard Thomas and Baldwins discontinued[5].

1957 Public sale of shares in the company by Holding and Realization Agency; application for shares by GKN and Metal Box Co met in full; about 85% of the issue was left with the underwriters[6].

1960 Advert shows the Cold Strip Mill, built for the Velindre Works by Davy-United.

In 1967 the Steel Company of Wales were taken over by British Steel and with further developments each works operated with four electrolytic continuous tinning lines, producing one point two million tons of tinplate per annum.

At its peak Velindre works employed more than 2,000 and it was considered to be the 'jewel in the crown' in British Steel, having the reputation for higher yields with fewer complaints than the other two works.

1980 Following increased worldwide competition it was decided in December 1980 that one of the three tinplate works would have to close and Velindre was elected.

1989 Production was gradually run down until the works finally ceased production in 1989. Another 108 were given jobs at Trostre, and a small workforce were kept on for a short period to clear the site