Grace's Guide is the leading source of historical information on industry and manufacturing in Britain. This web publication contains 138,049 pages of information and 222,629 images on early companies, their products and the people who designed and built them. 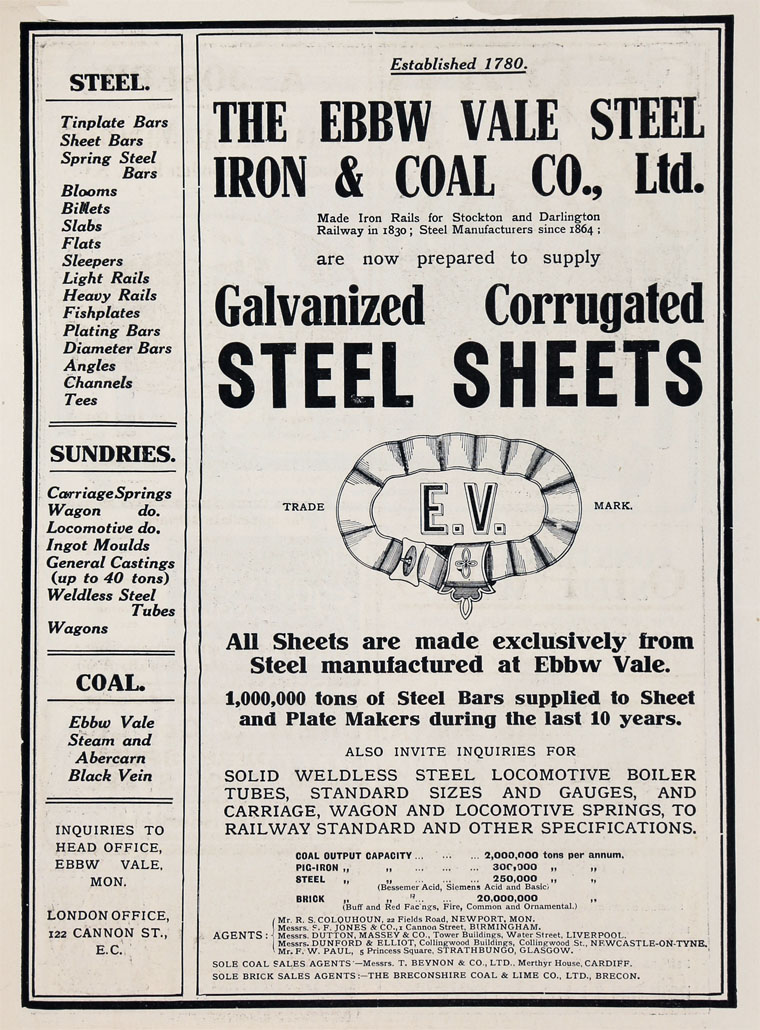 of Ebbw Vale, the site of a major producer of iron and then steel, the first in the Britain to integrate both iron and steel production.

1864 Abraham Darby (1804-1878) converted the Ebbw Vale company into a public limited Company to be called the Ebbw Vale Co Ltd under the general management of William Adams.

By 1866 a new company Ebbw Vale Steel, Iron and Coal Co had been incorporated with the same partners as the Ebbw Vale Co - Abraham Darby IV, Harry Dickinson, William Tothill and Thomas Brown. The new company owned or had a controlling interest in the Ebbw Vale Steel Sheet and Tinplate Works, the Abersychan and Pentwyn Iron Works at Abersychan, and the Pontypool Iron and Tinplate Works together with the Prince of Wales and Waenlwydd Collieries at Ebbw Vale, the Marine Colliery near Cwm and the Cwmcarn Colliery.

1866 The Pontypool Works were placed under the management of the newly incorporated Ebbw Vale Steel, Iron and Coal Co Ltd[2].

1871 Messrs. Josiah Richards, John Jones and David Williams took over the Pontypool Works under lease, trading under the title of Pontypool Iron and Tinplate Co.

1880-1883 The Coppee system of coking ovens became fully operational. The Sirhowy furnaces were blown out and two large modern furnaces were erected at Victoria.

1884 An article in ‘Engineering’, 8th August 1884, described a visit to the works. Worthy of note was the furnace blowing plant at the older ‘Ebbw Vale’ furnaces. Two blowing engines had been erected c.1879 by the Coalbrookdale Co. These beam engines had steam cylinders 45" dia, air cylinders 90" dia, stroke 6 ft, and were fed by fourteen Cornish boilers fired by furnace gas. Reference was also made to the massive beam blowing engine built about 18 years previously (see above). It had a steam cylinder 72" dia, air cylinder 144", stroke 12 ft. The flywheel was 30 ft dia and weighed 90 tons. Speed 12 rpm. The original cast iron crankshaft broke after just two days, and was replaced by a wrought iron crankshaft which lasted until about 1879, when it failed, and was replaced by a new shaft made from Whitworth’s compressed steel. The new Victoria furnaces were served by two blowing engines, one by Daniel Adamson and Co, the other by Galloways.

1892 The business ran into difficulties. Changes were made to the Company’s Board and to local management. The head office of the company was also switched from Manchester to Ebbw Vale.

1897 A spring-making plant was set up in Ebbw Vale, one the few in South Wales at that time.

1898 In order to make use of the scrap made in the Bessemer department and to meet the demand for ‘Siemens steel’ (largely used in the manufacturing of tinplate), two Siemens open hearth furnaces were erected.

1900 A new blast furnace on the most modern American lines came into service at Victoria with a weekly output of 2300 tons.

1905-17 Eight railway locomotives were built, some with parts from Peckett and Sons

1911 Despite working to full capacity and with little warning, the works was closed. The chief reason given was cheap foreign imports.

1912 The works was reopened and a new sheet mill erected. This provided a regular market for part of the output of steel bars for the manufacture of galvanised steel sheets. Output was 600 tons per week. On May 25 the foundation stone was laid for the new general offices. The architect was F. J. Veall of Cardiff.

1914 With the outbreak of the war the company was the first of the bigger employers in Great Britain to grant an allowance to the dependants of all those who joined up.

1915 A shell factory was established in the fitting shop which employed mostly female labour.

1918 At the instigation of the government, work commenced on two additional furnaces at Victoria both capable of producing 2,750 tons per week.

1921 The post-war boom was at an end. The heavy capital investment expected between 1918–1921, in expectation of continued prosperity, did not materialise. The Company made a profit of £399,388. It was the last time it would do so.

1922 The restructuring of the steel industry in Europe, following the devastation of the war, enabled continental countries to undercut Britain’s world markets. Prices for pig iron and steel fell sharply.

1925 The iron and steel plant at Ebbw Vale was working at 75% of its capacity. The Siemens furnaces closed.

1927 See Aberconway Chapter 17 and 18 for information on the company and its history.

1929 In the year to March 1929, the Company had produced 6,000,000 tons of coke; 364,871 tons of pig iron; 248,379 tons of steel, nearly reaching the production level of 1920. Investments in new machinery included new electrically-operated rolling mills, replacing use of steam, and a new hot metal receiver capable of holding 1,500 tons, the world’s largest, installed in the Bessemer department. Despite the optimism, the steel plant was closed, this time permanently. A number of departments were left in operation, for example, the sheet mills and collieries but 4,000 men found themselves out of work causing great distress in the community.

1930s The company took control of the Newport Abercarn Black Vein Steam Coal Co Ltd and the Powells Tillery Steam Coal Co Ltd. These and other assets were disposed of between 1936 and 1938 partly to Richard Thomas and Co and the rest to Partridge, Jones and John Paton Ltd[9].

1935 Following a period of intense speculation, Sir William Firth, Chairman of Richard Thomas and Co announced that his company had purchased the assets of the Ebbw Vale Iron and Steel Works and that the first continuous hot strip mill outside the USA would be located there[10].