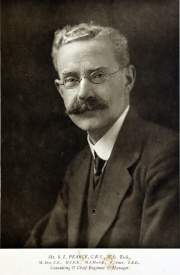 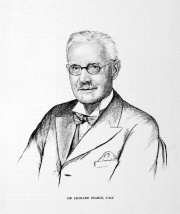 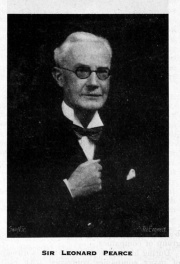 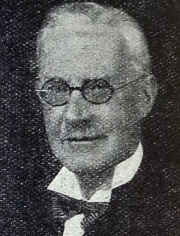 "THE British electricity supply industry has lost one of its distinguished members by the death of Sir Leonard Pearce, which occurred at his home at Bickley, Kent, on Monday last, October 20th. For the last twenty-one years he had been engineer-in-chief to the London Power Company, Ltd.

Standen Leonard Pearce, who was the son of the late Rev. Standen Pearce, was born at Crewkerne, Somerset, on September 28, 1873, and received the early part of his education at Bishops Stortford College.

From there he went to the Finsbury Technical College, and subsequently served an apprenticeship with the Electrical Engineering Co, West Drayton, and with Thomas Richardson and Sons, Hartlepool.

In 1896, soon after the completion of his apprenticeship, Leonard Pearce was appointed assistant engineer to the British Steam Navigation Co, Calcutta, and a year later he entered the electricity supply industry, becoming assist ant engineer to the Metropolitan Electric Supply Co. In this position he worked at the Rathbone Place, Manchester Square, Sardinia Street, and Willesden stations of the company, and then in 1899 joined the staff of the British Thomson-Houston Company, Ltd.

For a year, Pearce served as an assistant constructional engineer and was engaged principally on the electrical equipment of the Central London Railway. After relinquishing his post with the B.T.H. Company, Ltd., Pearce was appointed, in 1900, assistant superintendent engineer at the Shepherds Bush power station of the Central London Railway. Shortly afterwards, he became superintendent engineer and was directly responsible to the engineer-in-chief of the railway for the power-house, sub-stations and line equipment....Read More

"SIR STANDEN LEONARD PEARCE, C.B.E., D.Sc., in whose passing the engineering profession loses one of its most distinguished leaders, was born in 1873, at Crewkerne, Somerset, son of the late Rev. Standen Pearce, and died at his home in Bickley on 20th October 1947.

He was educated at Bishop's Stortford College and the Finsbury Technical College, and received his engineering training at the Electrical Company of West Drayton and with Thomas Richardson of Hartlepool. His first appointment, in 1896, was as an assistant engineer with the British India Steam Navigation Co, Calcutta, and after a year's service he joined the Metropolitan Electric Supply Co, London. Two years later he joined the staff of the British Thomson-Houston Company, and in the following year became assistant superintendent — and later superintendent engineer—of the Shepherd's Bush Power Station of the Central London Railway. Thus in the first few years of his career he gained a wide experience in marine, electrical, constructional, and railway engineering.

In 1916 he formed, at the request of the Board of Trade, a committee to consider the electrical supply resources of Lancashire and Cheshire, and in 1920 he played a leading part in the inception of the South-East Lancashire Electricity Scheme — acting as chairman of the Advisory Board, which was the first one to function in any of the districts into which the country was divided under the 1919 Electricity Supply Act.

At the invitation of the Municipality of Sydney, New South Wales, he spent six months in Australia in 1924 to advise on various matters in connection with the electrical developments in that country.

In 1925 he resigned his position in Manchester on being appointed an Electricity Commissioner, in which capacity he assisted in the preparation of the national electricity scheme, the legislative authority for which was embodied in the 1926 Electricity Supply Act.

In 1926 he was appointed engineer-in-chief of the London Power Co, which position he was still holding at the time of his death. During that period he was responsible for much notable work, including the building of the Deptford West Power Station in 1929 and the famous Battersea Power Station in 1933. In connection with the latter, he initiated and carried through with complete success the design and construction of the flue-gas washing plant—a notable and pioneering achievement in chemical engineering.

During the period 1940-45 he again became a part-time Electricity Commissioner.

Practical evidence of the leading role he played in power station development is afforded by the fact that stations which he designed headed the list for efficiency of all power stations in this country in no less than sixteen out of the twenty-four years (1923-46) during which the Electricity Commissioners' Fuel Returns have been issued.

He was awarded the C.B.E. in 1919, and was created a Knight in 1935. The honorary degree of Doctor of Science was conferred upon him by Manchester University in 1926.

He made many valuable contributions to the Proceedings of these various bodies, such as his paper before the Manchester Association in 1918 on "Steam Turbine Engineering", for which he was awarded the Constantine Gold Medal, and the paper before the Institution of Civil Engineers in 1924 on "The Barton Power Station", for which he was awarded the Watt Gold Medal.

The Thomas Hawksley Lecture before this Institution in 1940—"A Review of Forty Years' Development in Mechanical Engineering Plant for Power Stations"—was a most valuable and comprehensive review of his Power Station engineering experiences, and the following concluding paragraph of that paper well illustrates his outlook on engineering: "I think the two main lessons to be drawn from such a review as I have attempted are: first, the importance of avoiding set ideas, and second, the importance of breadth of view. In these days of ever extending knowledge we all find it difficult to maintain contact with branches of engineering other than our own, but it is nevertheless of paramount importance to make effective this contact if the milestones of the future are to mark the greatest progress on the ascent to the summit of achievement."

In April 1947, the Institution of Electrical Engineers awarded him the Faraday Medal "for his outstanding contributions to the advancement of engineering practice and notable achievements in electrical engineering". He modestly disclaimed having merited the award, and generously added, "I do, however, express the hope that I have been enabled, with the help of many loyal colleagues, to give practical application to some of the inventions and suggestions of master minds, and thus to have rendered some service in the cause of industrial achievements in electrical engineering and in the advancement of power station practice in this country".

There is no doubt that his progressive ideas will influence future development in power station engineering for many years.

Sir Leonard was a keen musician and an enthusiastic mountaineer, and his proficiency in both these spheres revealed his ideal in life—that anything to which he laid his hand should be carried through at the highest possible level of efficiency.

Apart from his unsurpassed knowledge and sincerity of purpose in his work, perhaps his most outstanding characteristics were his modesty and great reserve—qualities which may well have caused him to be misjudged by those who did not know him intimately.

The Barton and Battersea Power Stations will ever stand as memorials to his work, and the many who had the privilege to work with and for him will cherish the lasting memory of an outstanding engineer, a true gentleman, and a sincere friend."