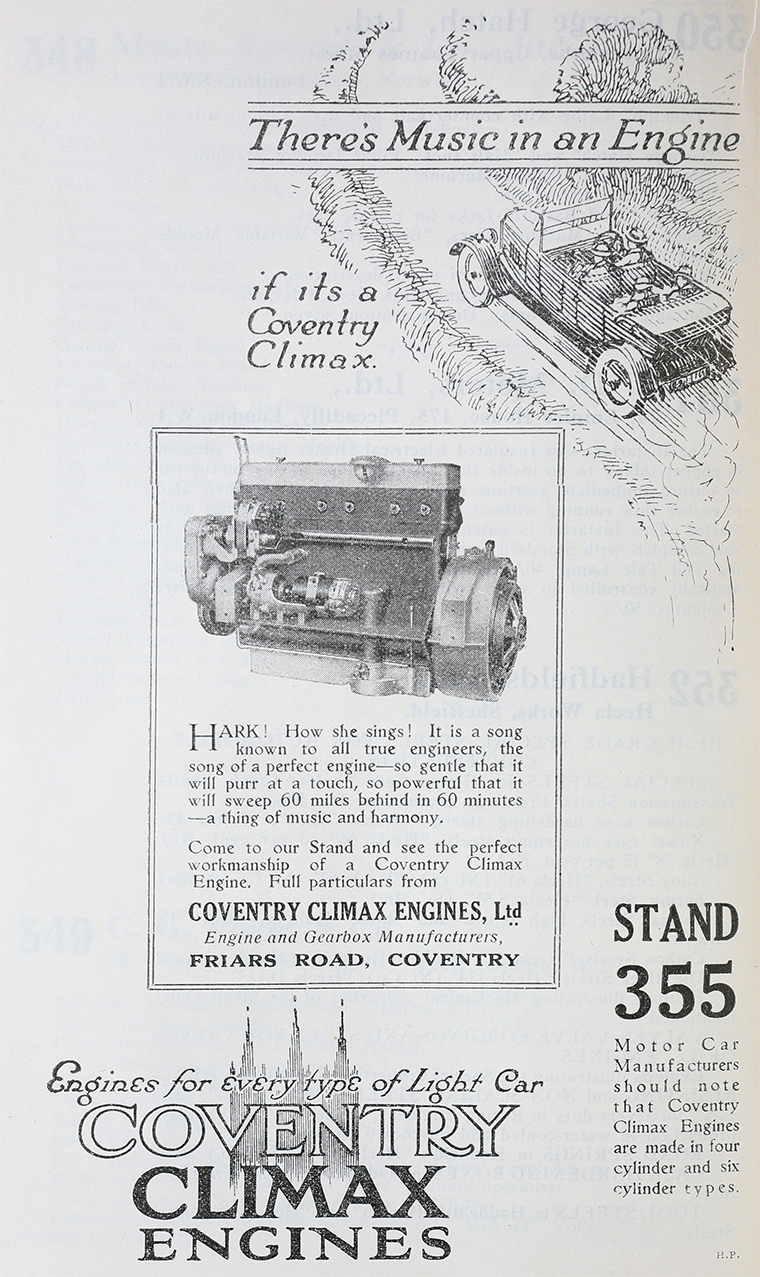 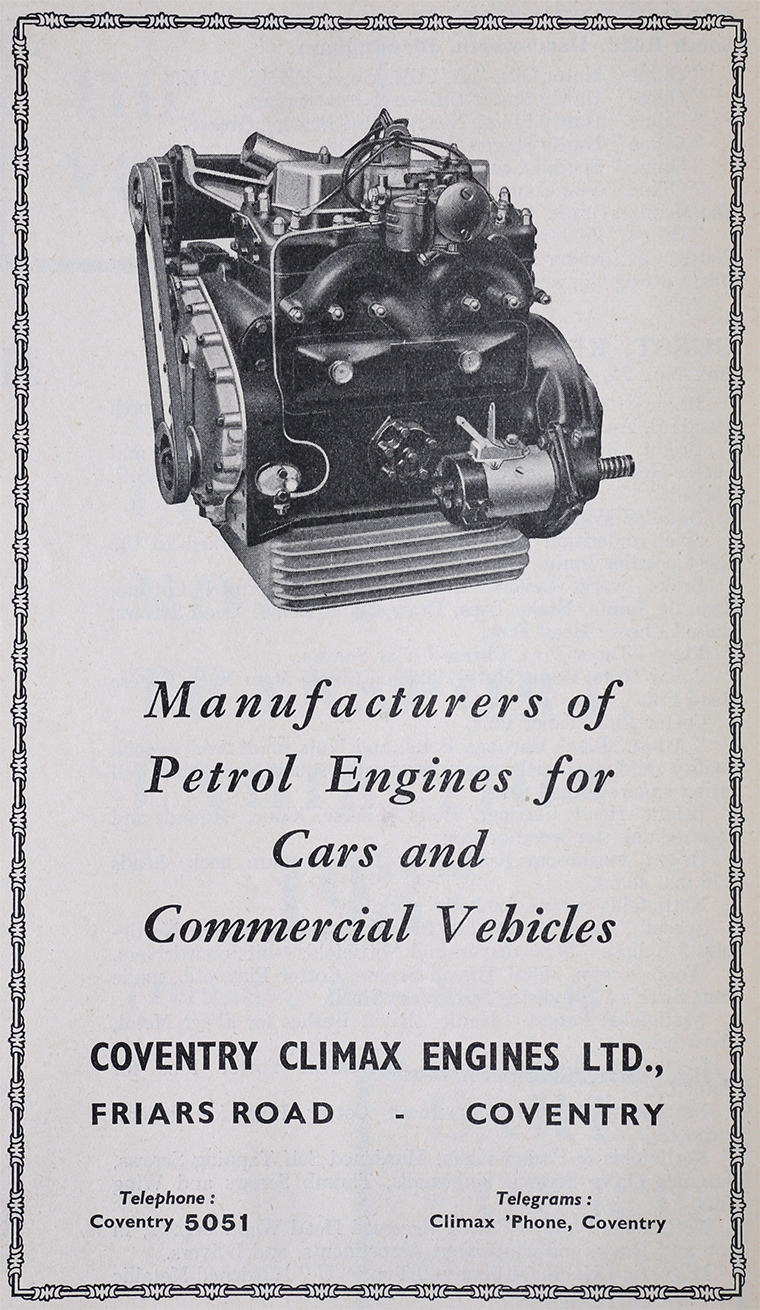 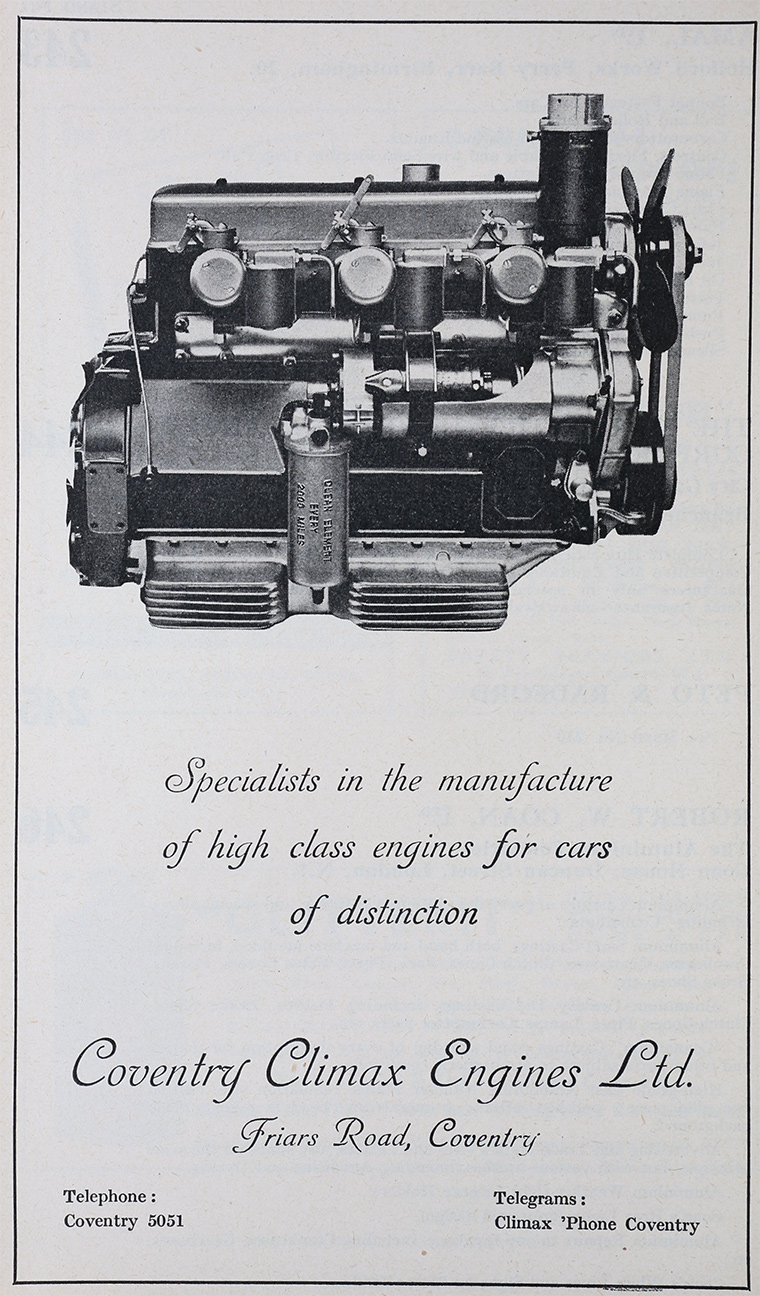 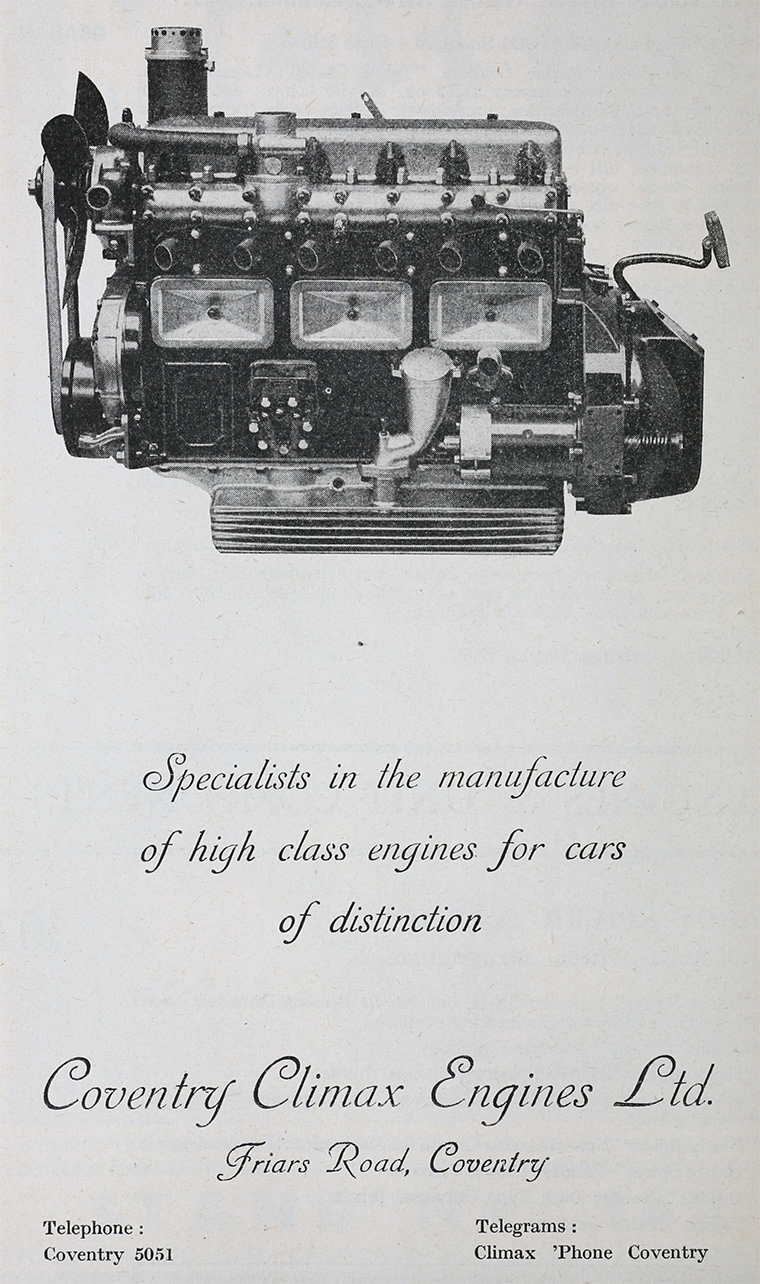 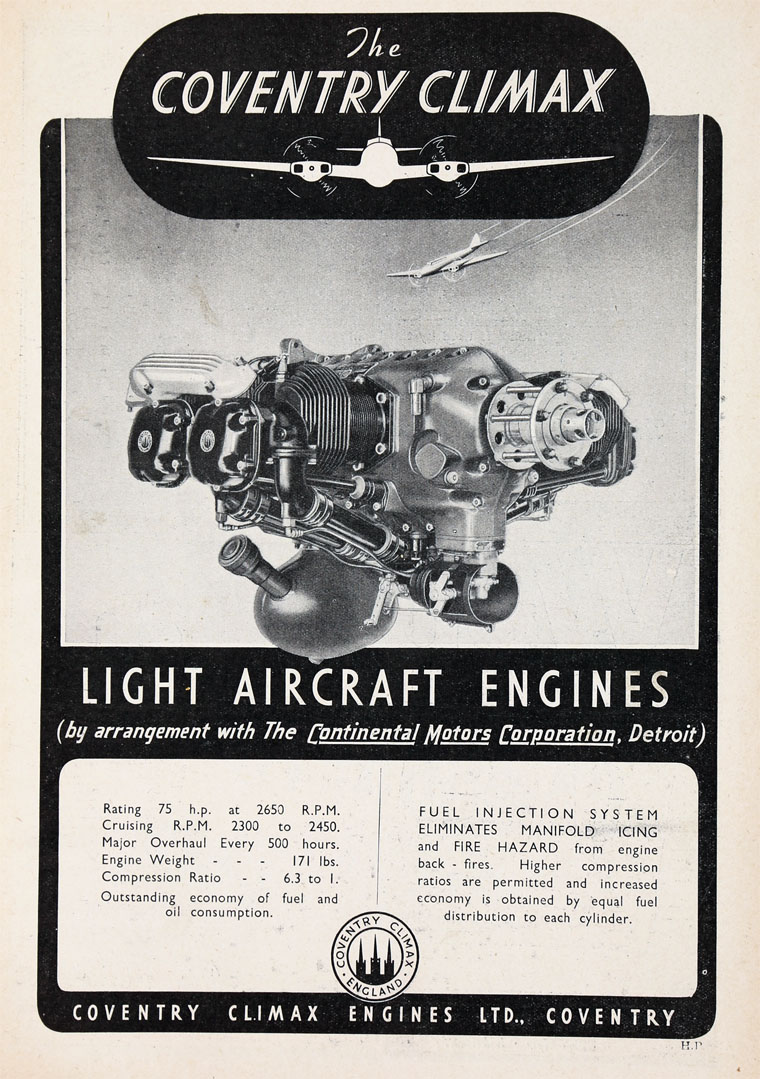 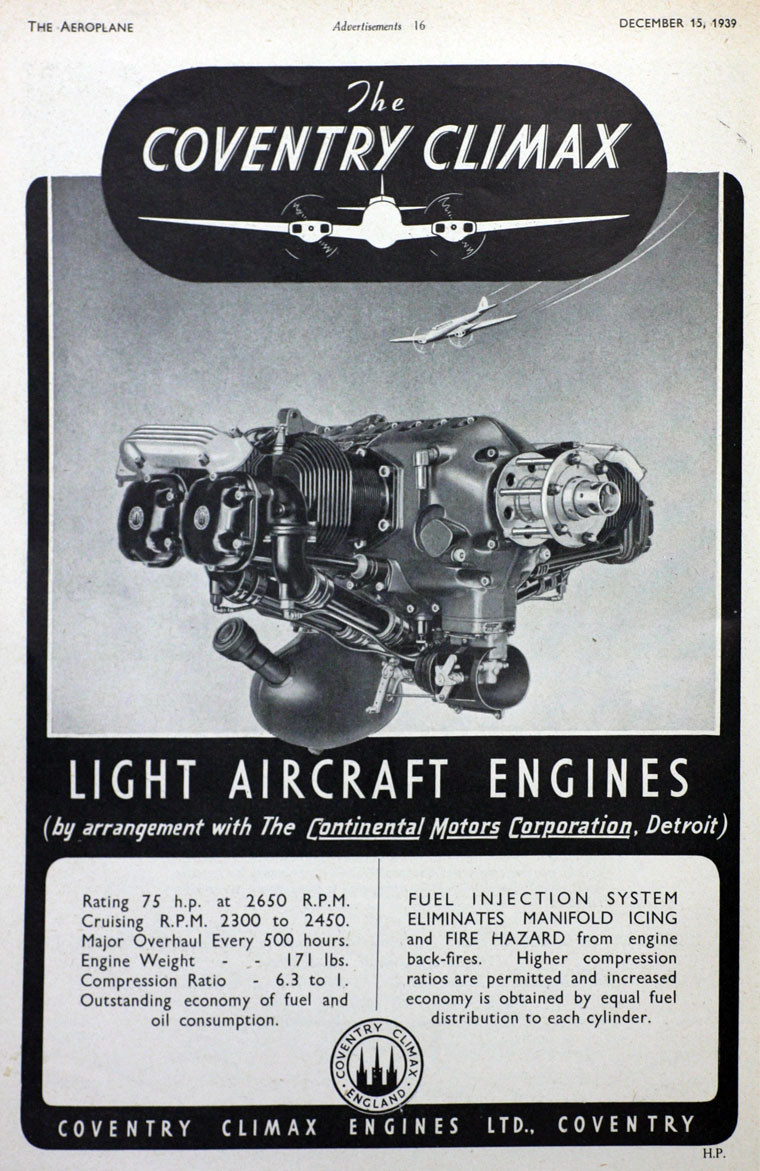 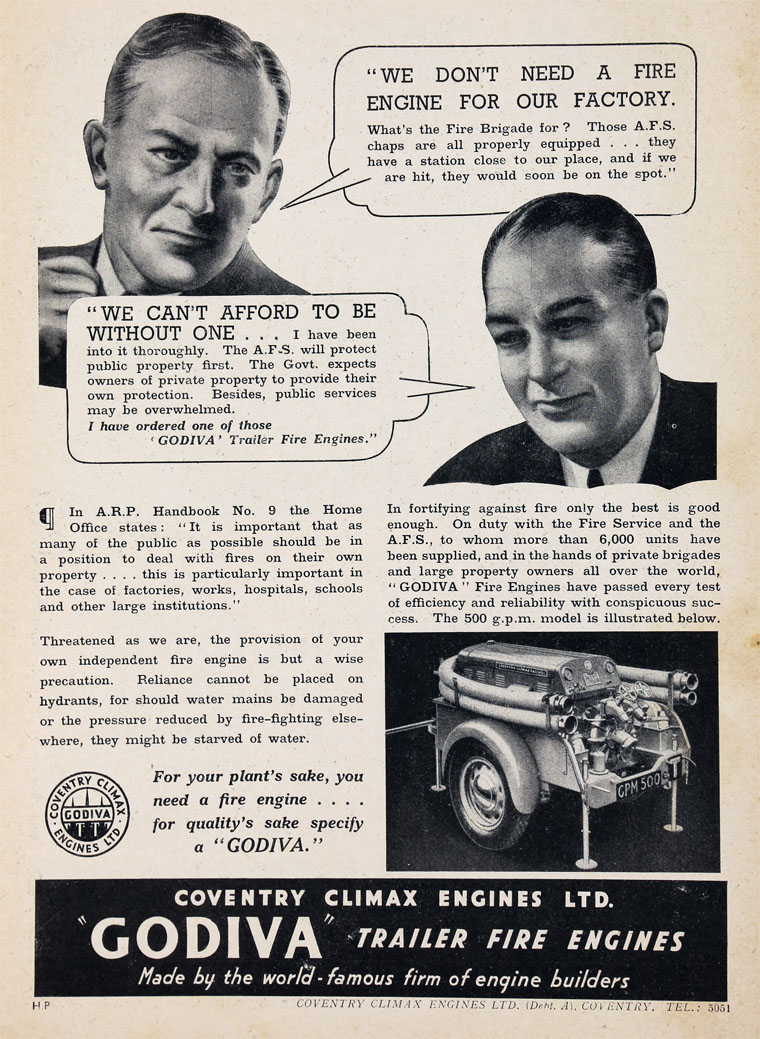 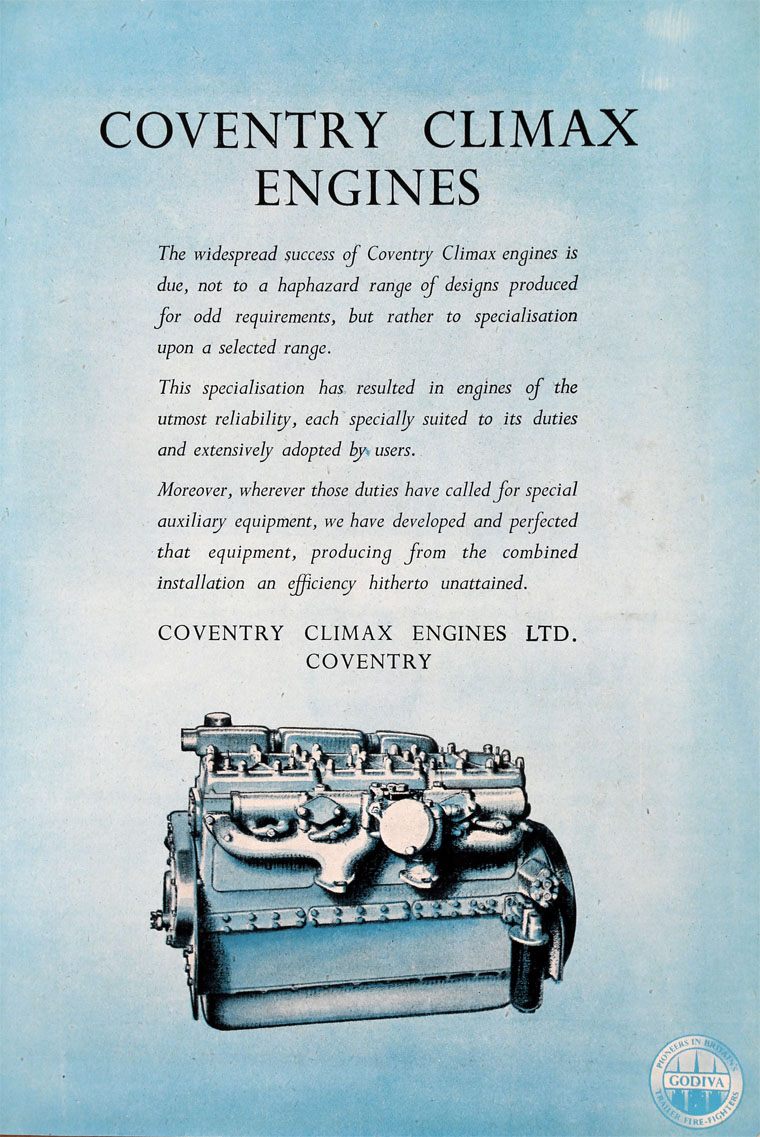 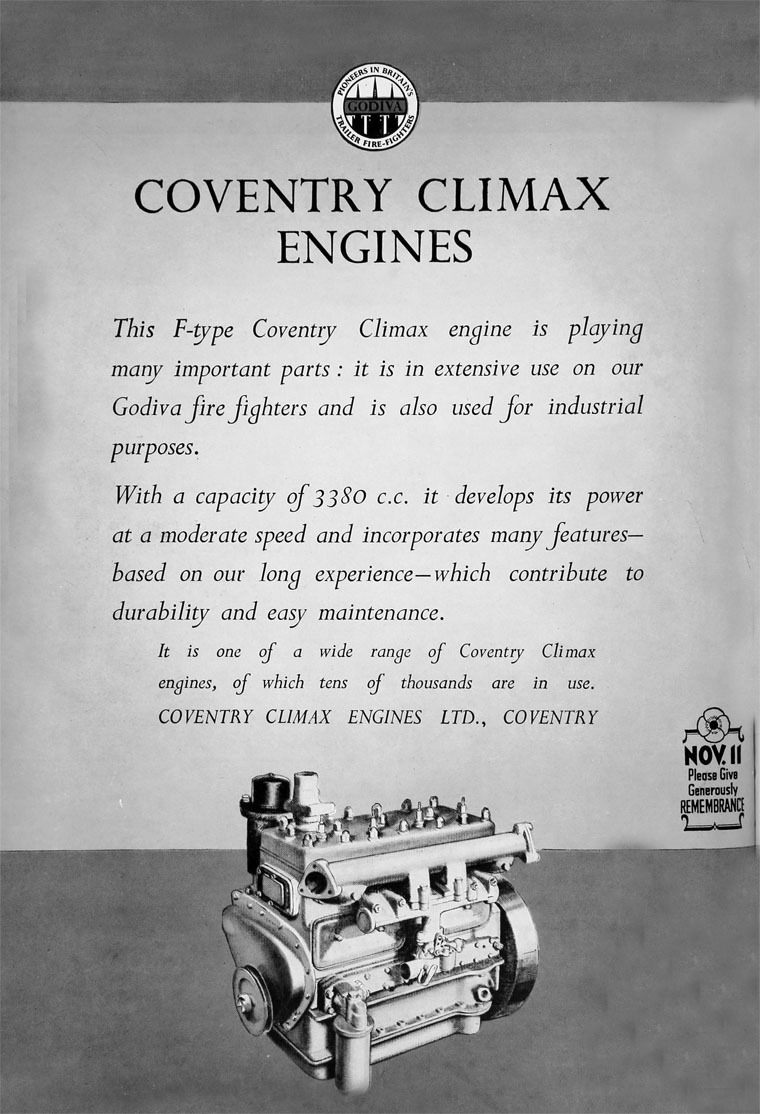 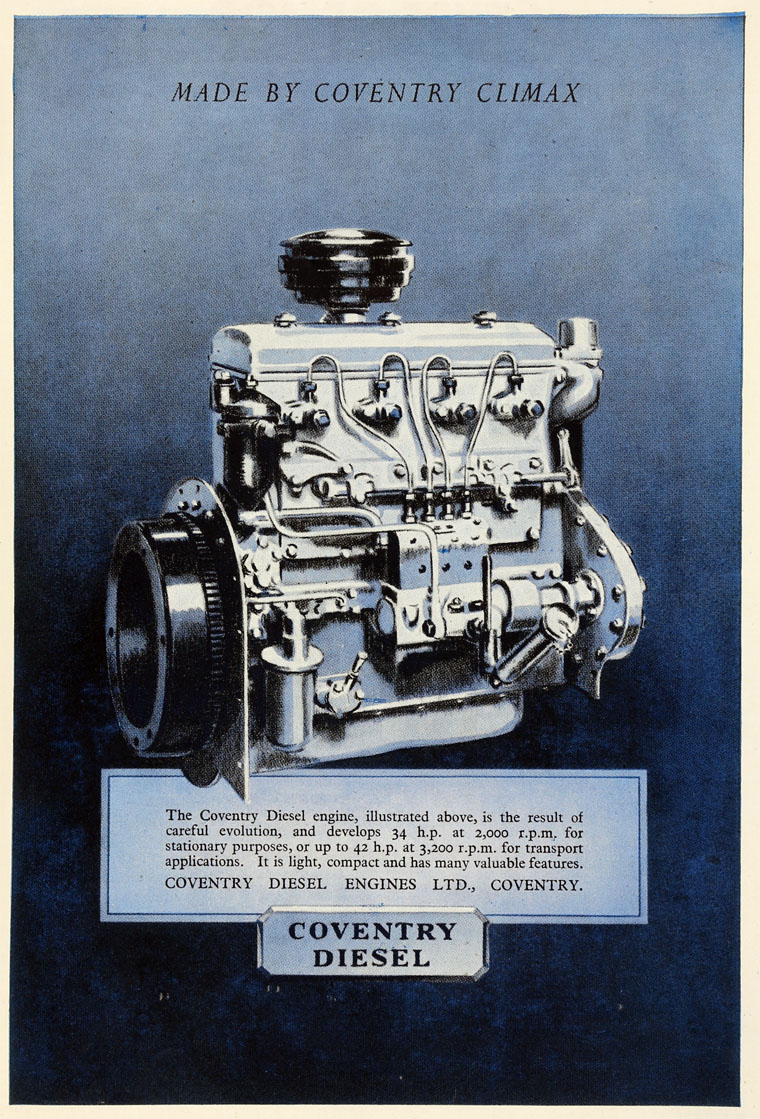 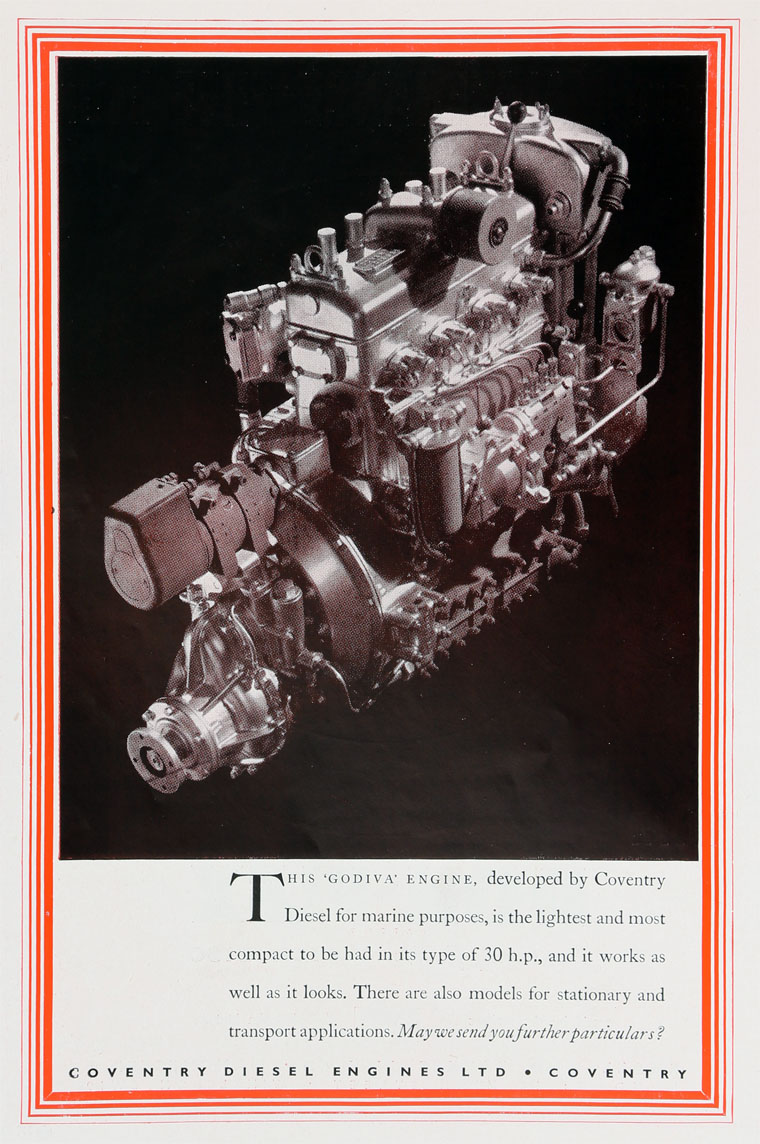 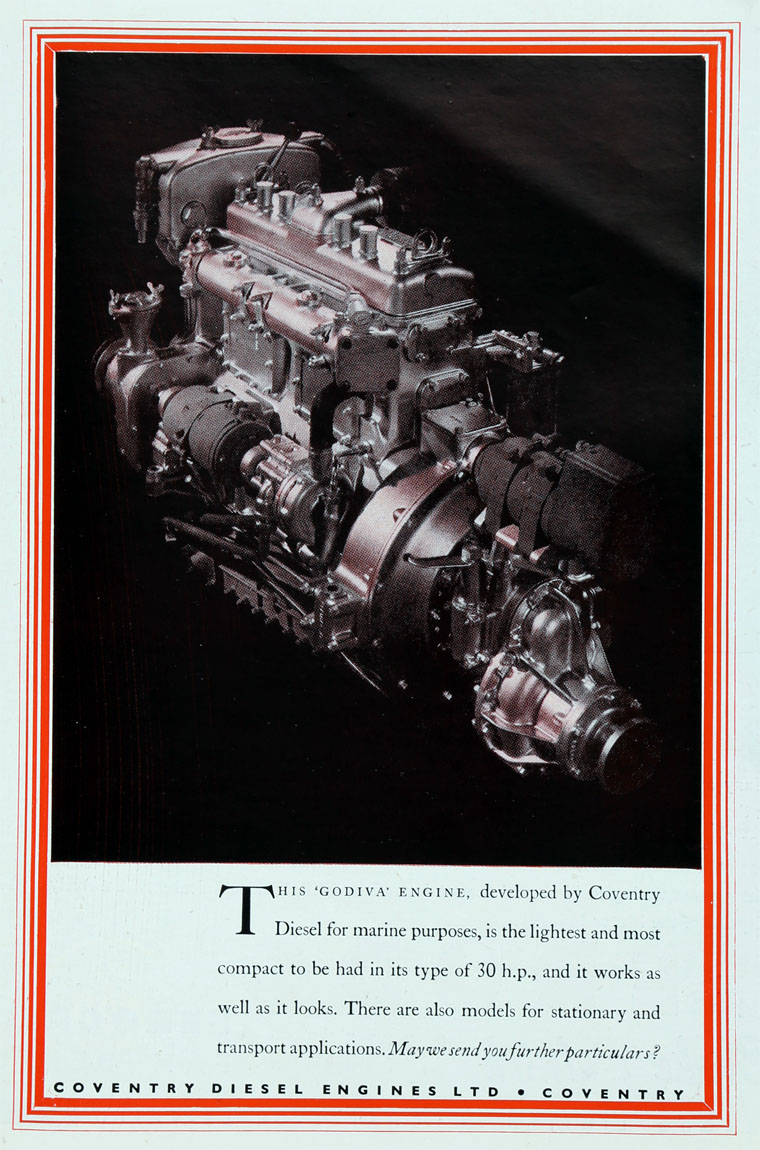 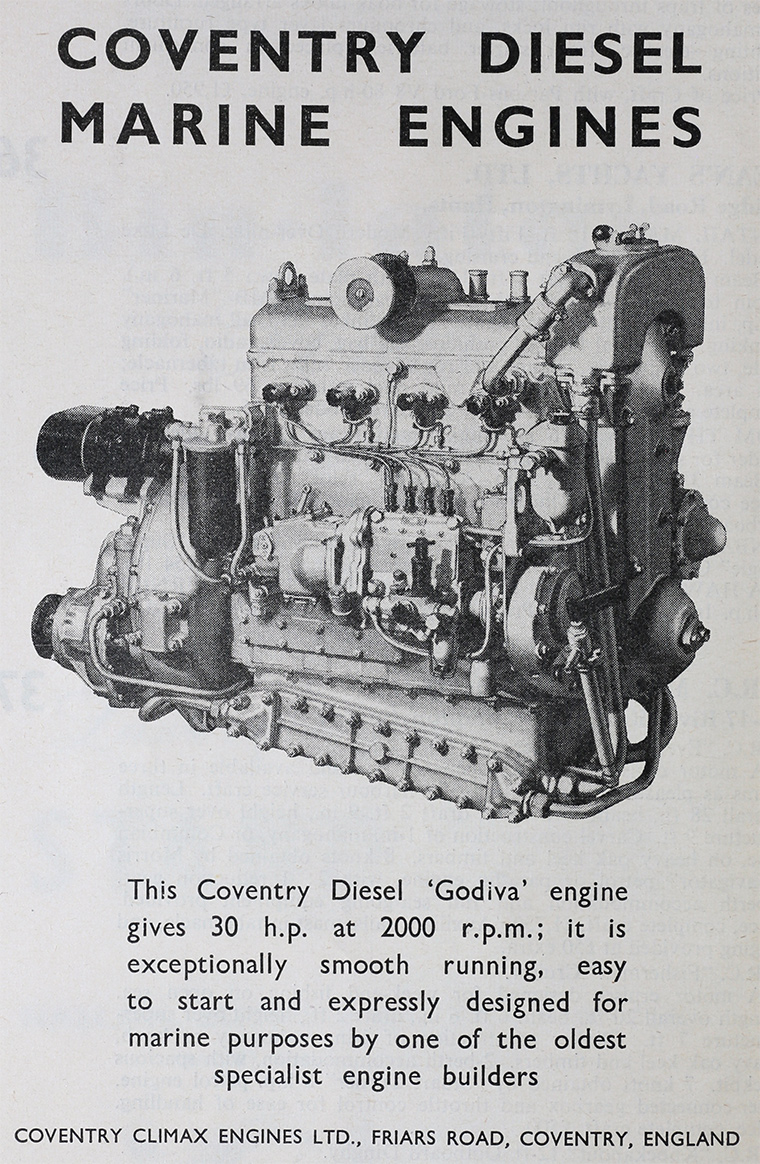 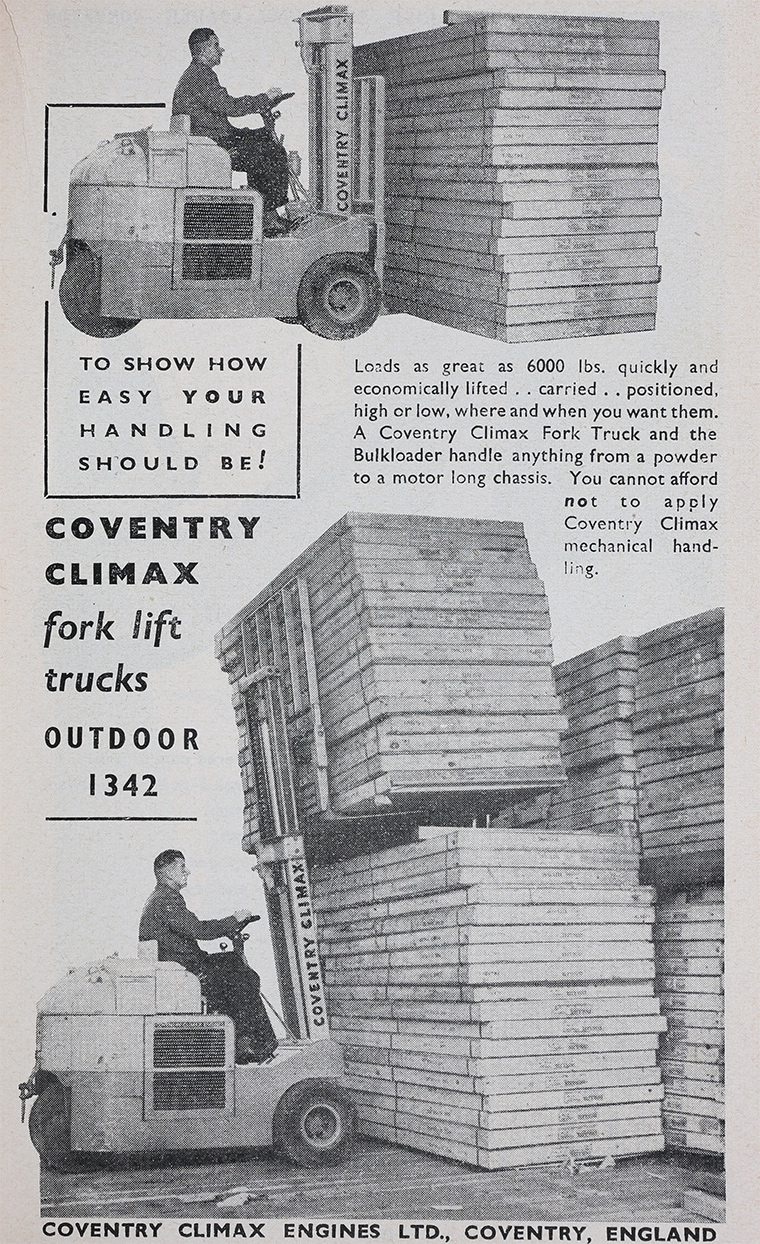 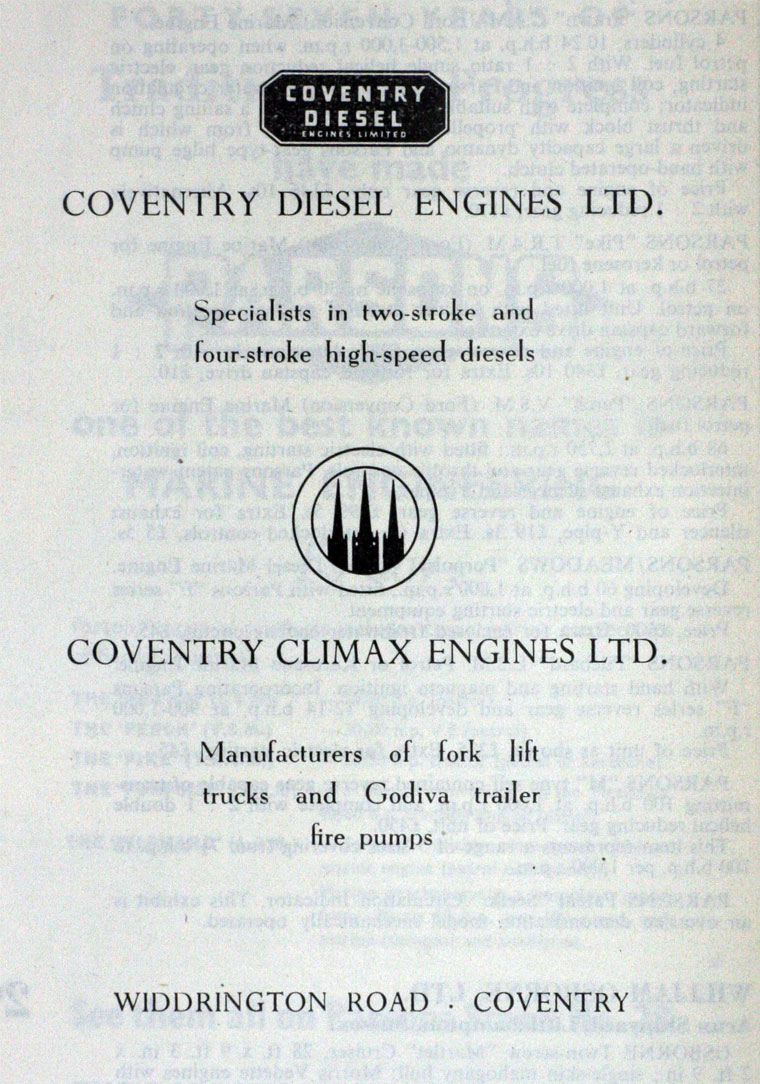 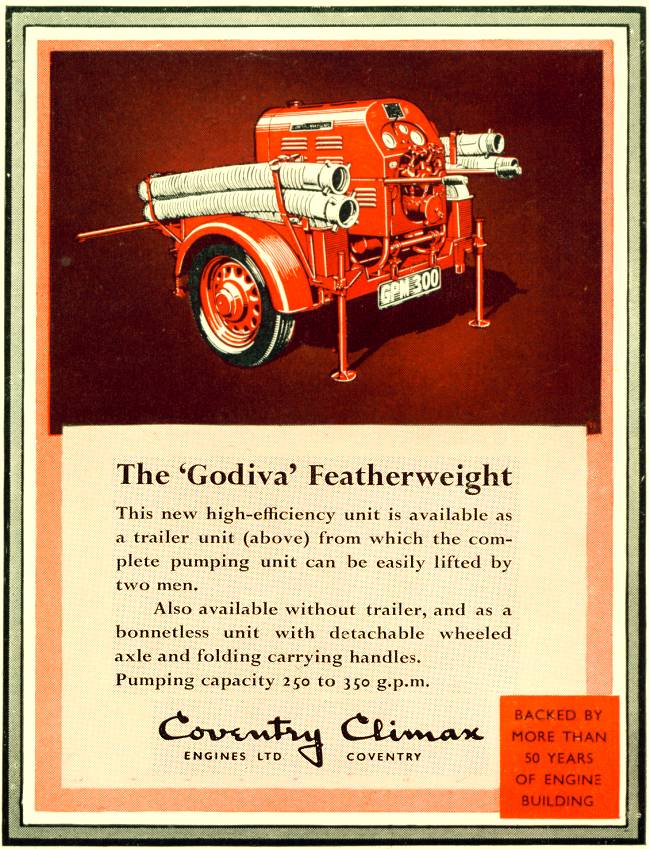 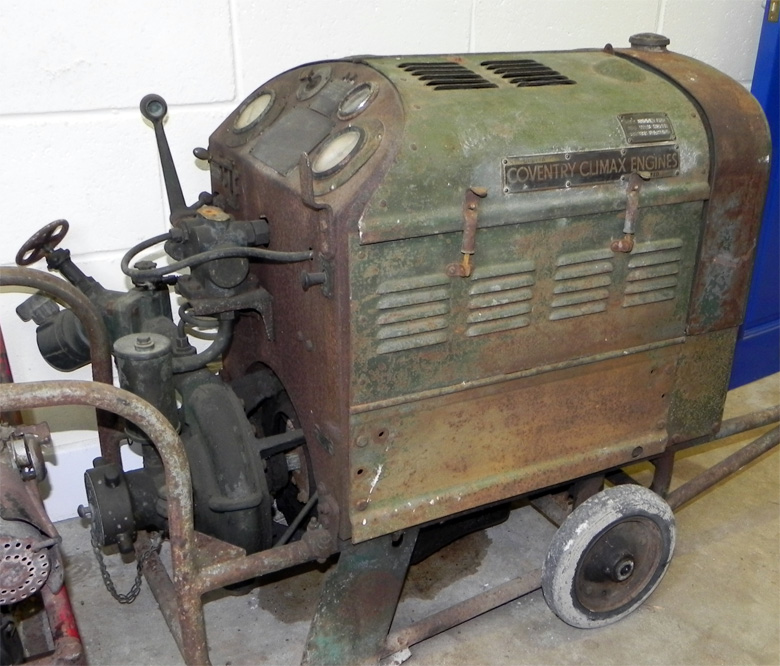 1917 Private company incorporated as Johnson and Smith Ltd., to acquire an old established engine manufacturing company of that name[1]. At some point moved to East Street, Coventry (presumably acquired the premises which had been used by Coventry Simplex Engines).

In the 1920s the company moved to Friars Road, Coventry and in the late 1930s they also acquired the ex-Riley premises in Widdrington Road, Coventry.

In the early 1930s the company also supplied engines for buses.

1931 With the closure of Swift in 1931 they were left with a stock of engines that were converted to drive electric generators giving the company an entry into a new field. This in turn led to the development of fire pumps and the "Godiva" which saw widespread use during the Second World War.

As the automotive companies took engine-manufacturing in-house, the company searched for other markets which led it to develop trailer fire pumps, which became standard equipment for the Civil Defence and Armed Forces.

In the late 1940s, the company shifted away from automobile engines and into other markets, including diesels for marine and fire pumps and fork lift trucks. In 1946 the ET199 was announced, which the company claimed was the first British produced forklift truck. The ET 199 was designed to carry a 4000 lb load with a 24 inch load centre, and with a 9 ft lift height[3].

Away from the car engine business Coventry Climax used their marine diesel experience to further develop and build the Armstrong Whitworth supercharged H30 multi-fuel engine for military use. This has been fitted as an auxiliary engine in the British Chieftain and Challenger battle tanks and Rapier anti aircraft missile systems.

1963 The company was purchased by Jaguar Cars,

1965 With the change of Formula 1 from 1.5l to 3l engines, Coventry Climax (which had supplied most of the British teams with its 1.5l engine) decided to stop manufacturing engines for Grand Prix racing at the end of the season[5]

Early 1970s the fire pump business was sold back into private ownership, and the Godiva Fire Pumps Co was formed in Warwick.

1982 BL sold the Coventry Climax forklift truck business into private ownership, to Coventry Climax Holdings Limited. Sir Emmanuel Kaye, also chairman and a major shareholder of Lansing Bagnall at the time, formed the company, independent of his other interests for the purpose of acquiring Coventry Climax.

1986 Coventry Climax, maker of forklift trucks, was put into receivership and was acquired by Kalmar Industries, maker of heavy trucks[6].

1990 a further change of ownership came when the engine business was sold to Horstman Defence Systems of Bath, Somerset thus breaking the link with Coventry.

The OC was an 1,122 cc straight-4 with bore of 63 mm and stroke of 90 mm with overhead inlet and side exhaust valves producing 34 bhp. It was introduced in the early 1930s and also built under licence by Triumph. A six cylinder version of the engine, the JM, was also made with a capacity of 1476 cc developing 42 bhp.

The FW 38 hp 1,020cc straight-4 was adapted for racing as the 1097cc FWA, producing 72hp. Other FW variants included a tiny 750cc FWC used by Dan Gurney, the 1500cc FWB and the FWM marine engine. The marine engine was adapted to automotive use as the FWMA and used in Lotus cars and the Hillman Imp. Climax powered Lotus cars won the "Index of Performance" numerous times during the 24 Hours of Le Mans.

The FPF was a pure-racing development of the FWB — it started life as a 1.5 L Formula Two engine, and was gradually enlarged as an F1 unit; a 2.0 L version took Stirling Moss and Maurice Trintignant to Cooper's first two Grand Prix victories against 2.5 L opposition; the engine later grew to a full-sized 2.5 L Formula One and grew to 2.7 L for Indy and the Tasman Formula, and even saw use as a stopgap in 1966 3.0 L Formula One racing.

One special engine from the company, developed from the marine engine, was the FWMV Coventry Climax V8. It produced 174 hp and was used by many racing cars from Lotus, including the Lotus 24, Lotus 25, and Lotus 33 and Cooper including the Formula Junior Cooper T51-Climax. Climax powered Lotus 25s and 33s won the Formula One World Championships in 1963 and 1965 driven by Jim Clark.

Climax built two notable engines un-raced in their original form — first the V8 FPE ("Godiva"), which was intended for the start of the 2.5 L Formula One in 1954 (withdrawn due to fears about the rumoured power of Mercedes and other engines, but in fact it would have been competitive). Paul Emery acquired a Godiva and fitted it to an old F3 chassis to make the Shannon F1 car in 1966, and the engine later ran in something close to its original form in the Kieft Grand Prix car when that was finally finished in 2003. The other unraced engine was the flat-16 FWMW; work on this continued through the later years of the 1.5 L formula with Lotus and Brabham the likely recipients, but the formula ran out before it showed any clear advantage over the V8.