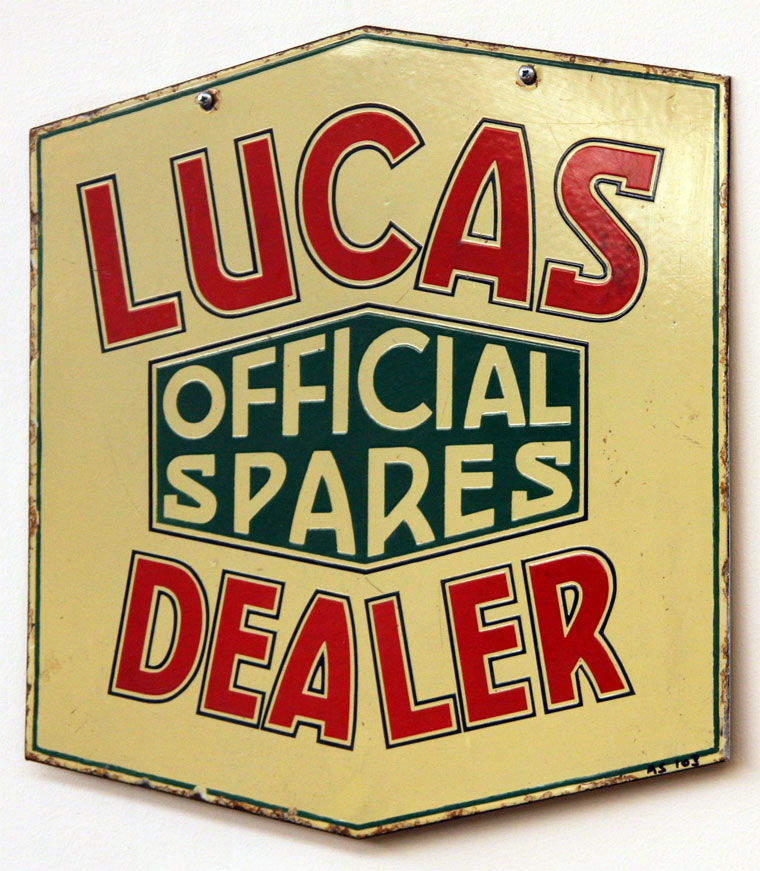 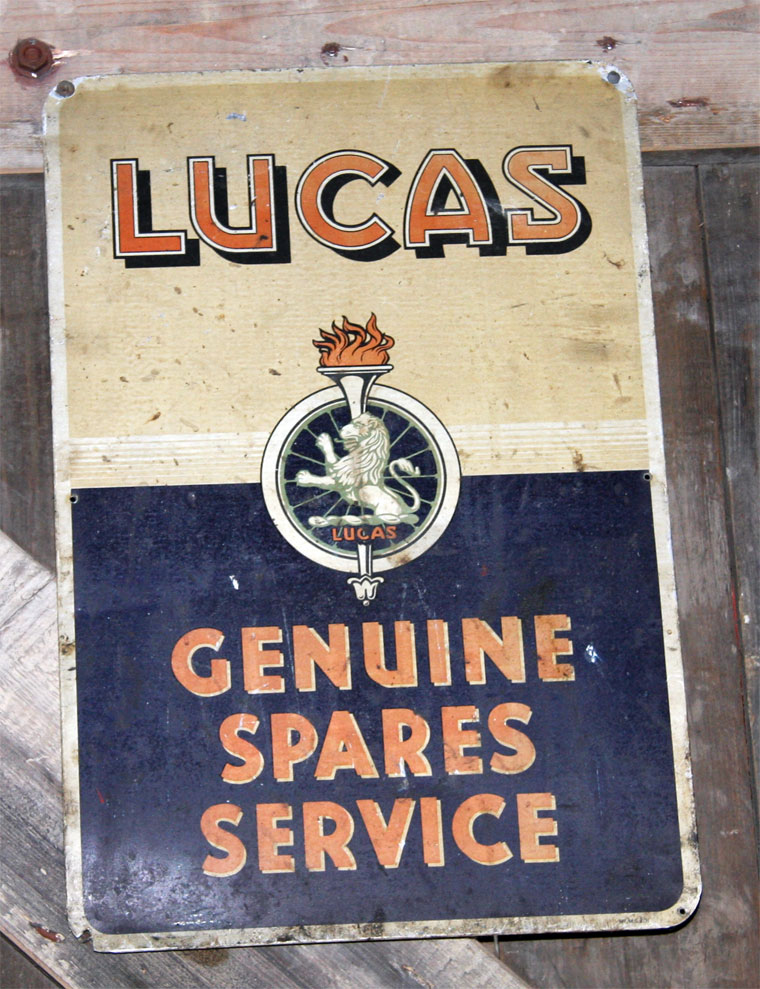 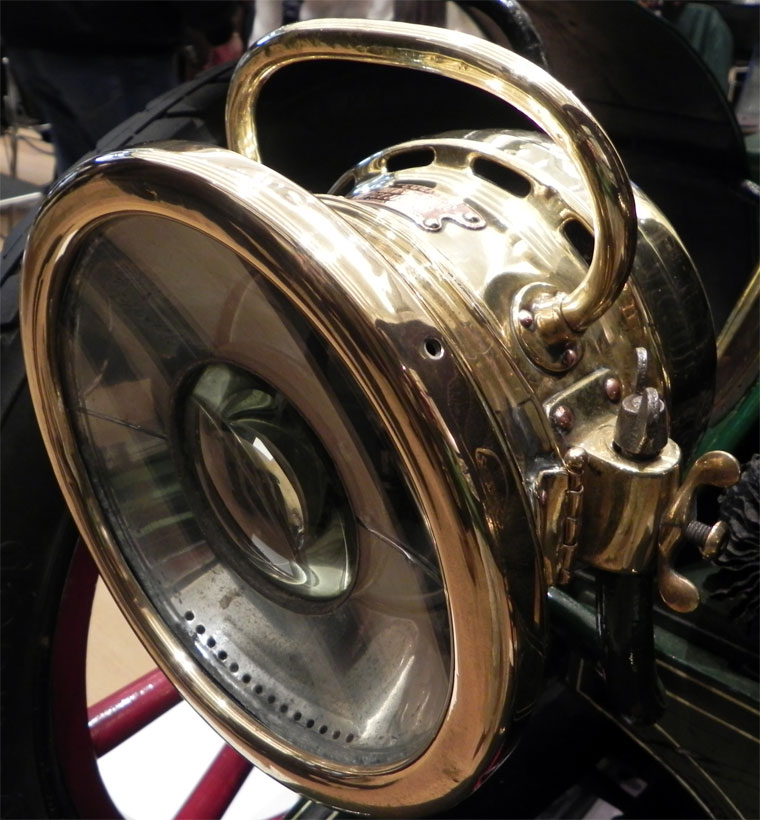 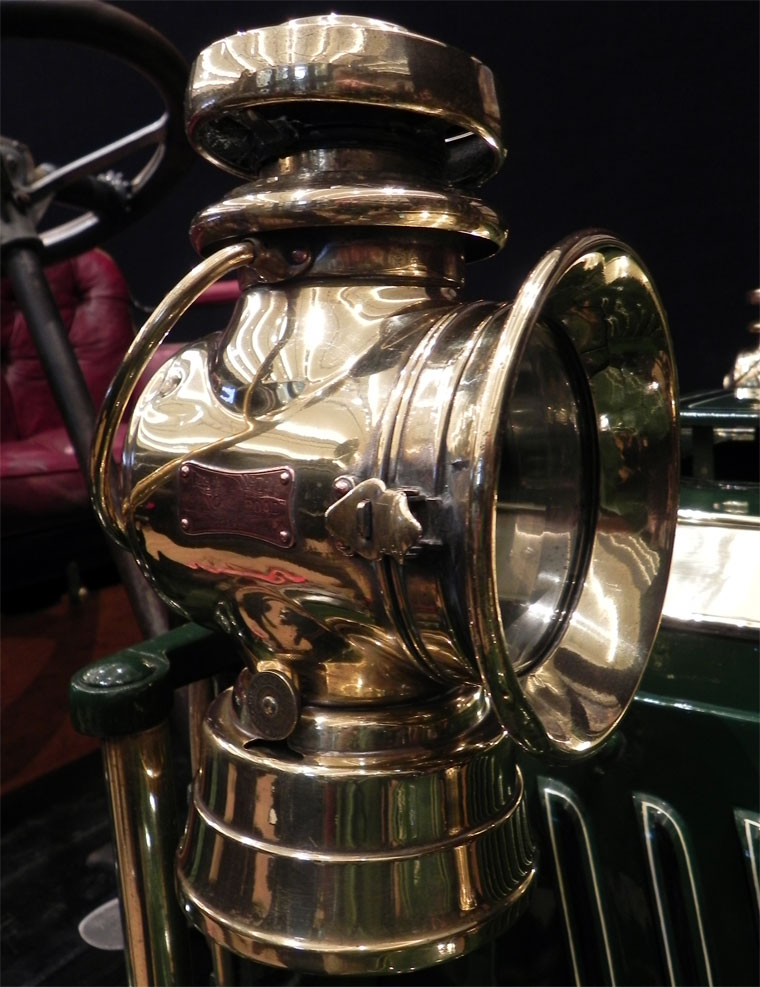 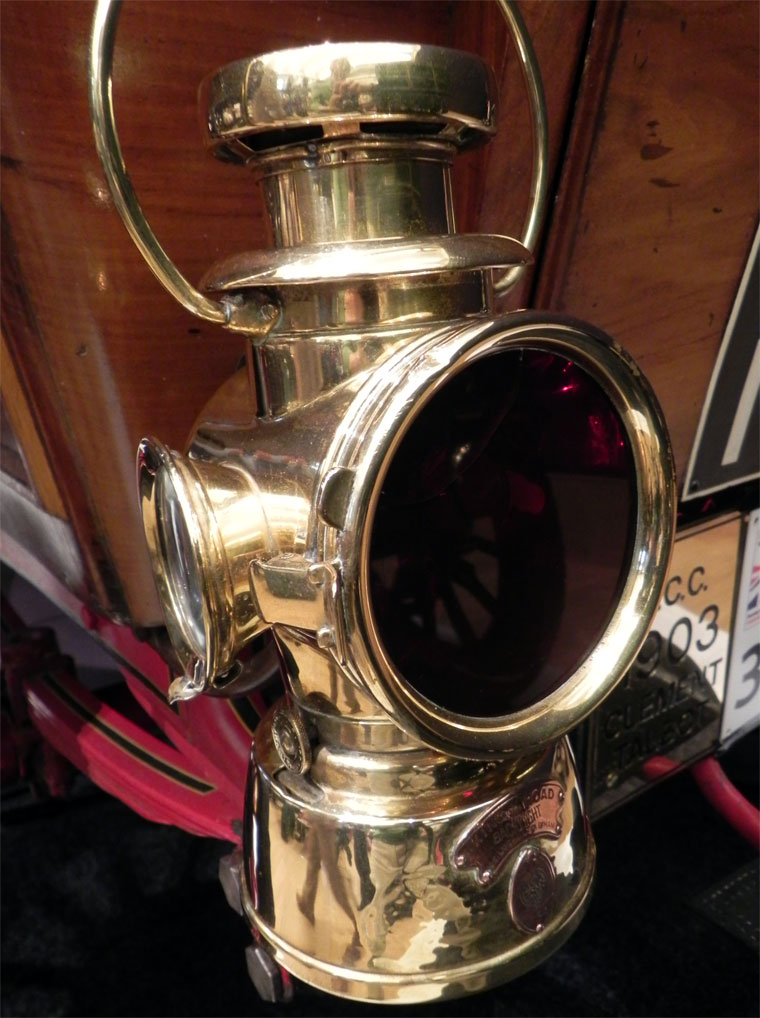 Lucas 'King of the Road' Projector. 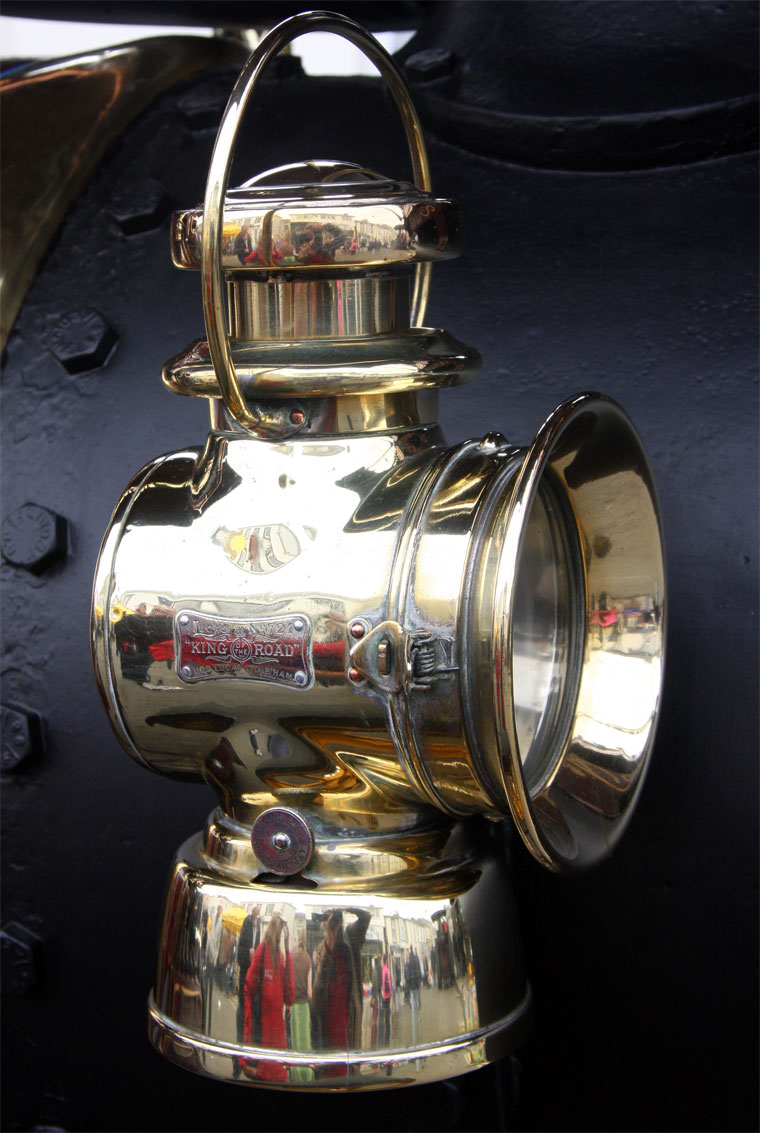 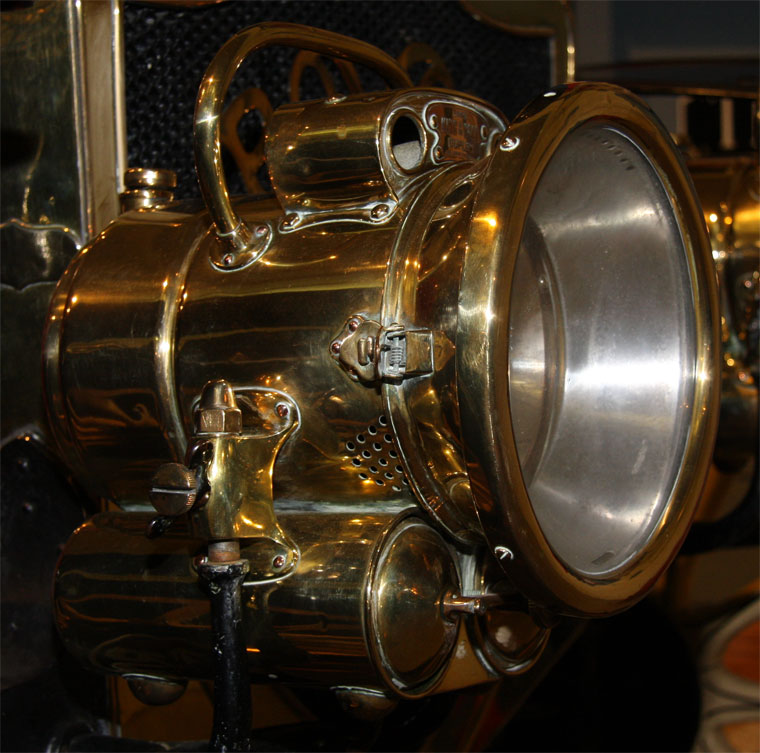 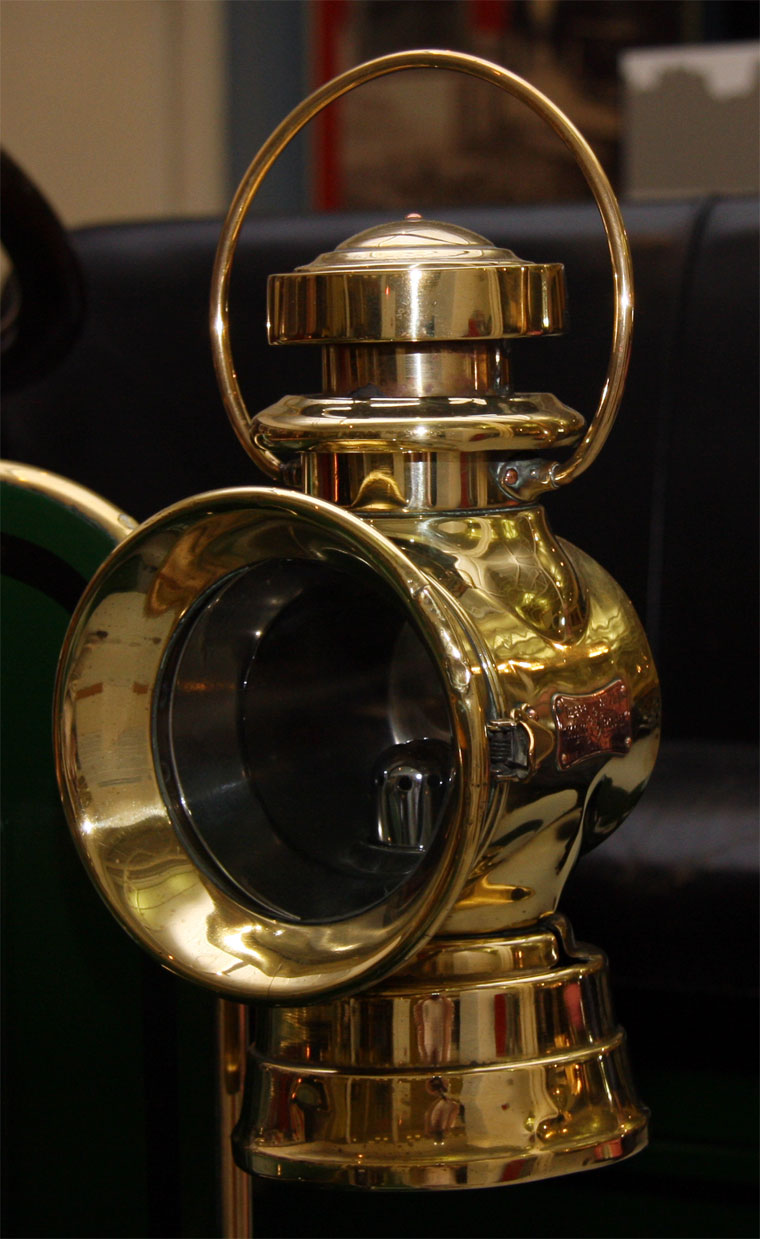 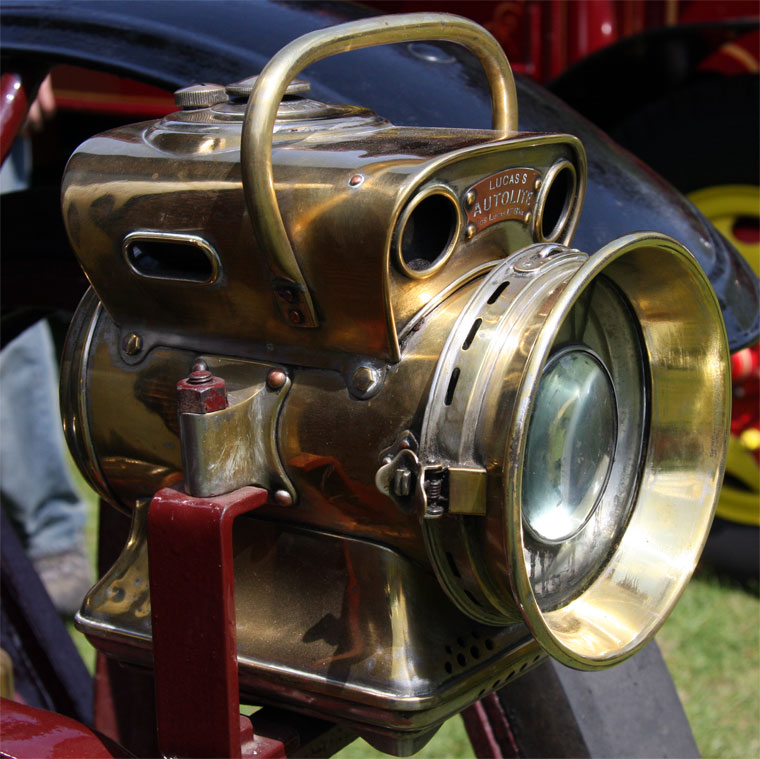 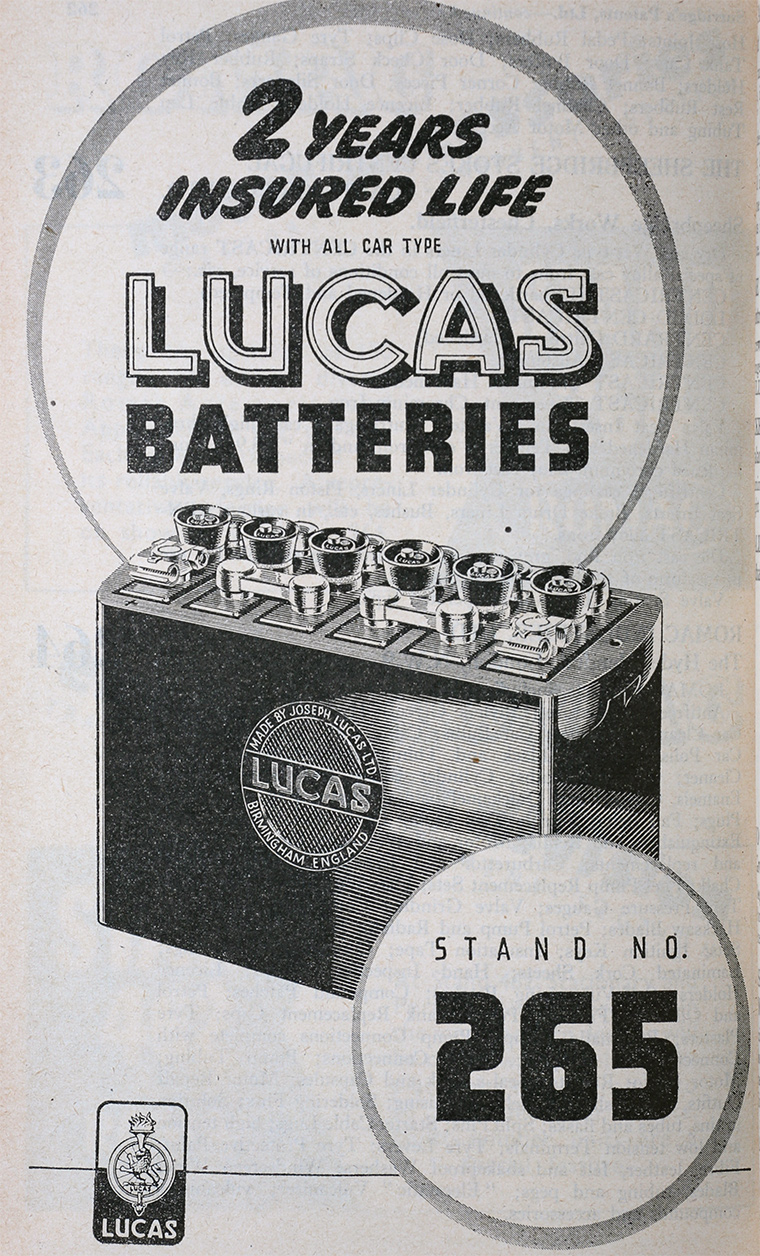 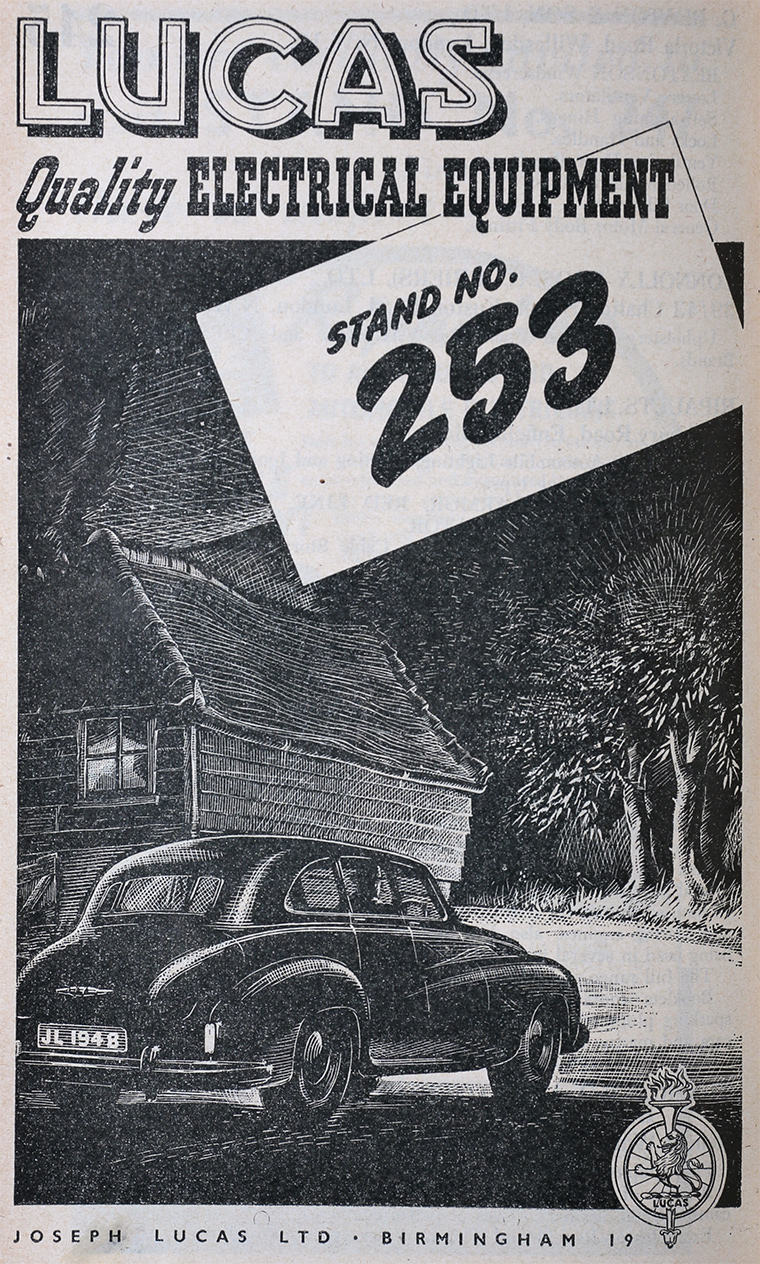 1897 A public company, Joseph Lucas Ltd was formed with a nominal share capital of £225,000 to take over the Lucas business. The company was registered on 12 November, to acquire the business of Joseph Lucas and Son, manufacturers of cycle lamps and other accessories. [1] The funds raised finance enabled the company to build a five-storey factory in Great King Street[2].

These motor products were followed a few years later by the company's entry into the electrical field with the manufacture of car batteries and dynamos. Oil lamp production also began.

Other products for the motorist include horns and hydraulic jacks.

1911 Whole lighting sets were first put on sale for cars, with the dynamo made completely in house.

1914 Expansion in the manufacture of electrical equipment followed the company's acquisition for the sum of £9,000, of the share capital and business of Thomson-Bennett which made magnetos. From this early takeover of the Thomson-Bennett magneto business stemmed the paramount interest of Lucas in the supply of electrical equipment for the motor industry.

1914 The company started its main growth in 1914 with a bulk order contract to supply Morris with electrical equipment.

1920 Peter Frederick Blaker Bennett, one of the two former partners in the Thomson-Bennett business, was appointed joint MD with Harry Lucas

1920 October. Exhibited at the Commercial Motor Exhibition at Olympia with electric lighting and starting units. [5]

From 1923 Bennett and Oliver Lucas, a grandson of the founder of the Lucas business, were Joint Managing Directors of the company. They established close personal relations with the principal vehicle manufacturers and themselves became leading personalities in the motor industry.

By 1923 over half its output of starting and lighting equipment was supplied to Morris. The value of the Morris business to Lucas is illustrated by the fact that in the four years from 1921 to 1925, Morris's sales of vehicles jumped from 3,000 a year to 55,000. At the same time, however, Lucas was selling in increasing quantities to other manufacturers, including Armstrong Siddeley Motors, Rover, Standard and Triumph, with the result that by 1926 the proportion of Morris business to Lucas's total sales had dropped to about one-third.

By 1925 had a separate manufacturing operation at Formans Road, Sparkhill, making small lead-acid accumulators for wirelesses[6]

For the year 1925-26, Lucas's production of starting, lighting and ignition sets for supply as initial equipment averaged 2,000 a week.

1926 Gained an exclusive contract with Austin. Lucas obtained the contract for the following year for the whole of Austin's requirements of starting, lighting and ignition equipment.

Between 1920 and 1925 Lucas laid down the pattern of its present distribution and service arrangements. It established its own depots in London, Liverpool, Leeds, Edinburgh, Glasgow, Newcastle, Manchester, Birmingham, Bristol, Dublin and Belfast for local distribution to wholesalers, traders and the public and for service and repairs.

Between 1925 and 1929 a number of wholesale electrical stockists and repairers were appointed as Battery Service Agents to stock, supply and service not only Lucas batteries but also other Lucas motor vehicle goods, including spare parts for repairs. Lucas also established a number of its own trade and repair outlets which it operated through County Electrical Services, a company it formed for the purpose through nominee shareholders. Lucas did not publicly disclose its ownership of these outlets and has said that the reason was that it wished to test customers' reactions to its products and service, and that the information obtained through its own depots was always coloured to some extent and not sufficiently reliable.

The development of the company in the inter-war years was marked not only by rapid internal growth due to the increased demands of the vehicle manufacturers but also by the acquisition of a number of other businesses and by certain important agreements made with other electrical equipment manufacturers, British and foreign. Lucas has said that amongst the reasons for its present dominant position in the motor electrical industry are (i) that its competitors got into financial difficulties with the collapse of the boom after the first world war, (ii) that competitors were in a relatively worse position than Lucas was when the American motor trade threatened to submerge the British motor trade even in the British market (before the introduction in 1915 of the McKenna duties) and (iii) that when the outlook was black it acquired certain competitors who were in financial trouble. Lucas attaches importance to the fact that among the businesses of which it acquired control were its two biggest competitors C. A. Vandervell and Co and Rotax.

1929 Acquired A. Rist and Powell and Hanmer.

Around 1930, Lucas and Smiths established a trading agreement to avoid competition in each other's markets.

1931 Following a manufacturing and market sharing agreement between Lucas and Robert Bosch A.G., Stuttgart, the well known German manufacturer of electrical equipment for motor vehicles, the name of C. A. Vandervell and Co (in which Bosch had acquired a 49 per cent interest from Lucas) was changed to C.A.V.-Bosch Ltd. By the agreement made in 1931 between Lucas and Bosch the ownership of Bosch Ltd. was transferred to C.A.V.-Bosch Ltd.

1937 Acquired Globe and Simpson and the British operations of Bosch.

1938 Manufacture of Girling brakes was taken over by Joseph Lucas Ltd but the patent remained in possession of New Hudson until the rights were, in turn, purchased in 1943. Lucas then moved their Bendix brake and Luvax shock absorber interests into a new division.

WWII Lucas produced electrical equipment for military and civil vehicles and for aircraft. Many of its standard products were adapted for war uses: for example, its windscreen-wiper motors were used to operate aerial cameras and its starter motors were adapted for the electrical control of tank gun turrets. Outside its normal fields, Lucas produced a wide variety of military requirements including gun turrets, aircraft wing sections, primers, fuses, anti-aircraft shells, bombs of various kinds, control and release mechanisms and metal pressings. It also undertook research work for the Government, including research and development work on jet propulsion in factories it took over specially for the purpose[8]

1943 Acquired David B. Irvine (Edinburgh) and Girling brakes, which absorbed the Bendix and Luvax operations.

1957 In addition, Lucas acquired a 50 per cent, interest in Siba Electric.

1968 Took over its major competitor in diesel injectors in the UK, Simms Motor and Electronics Corporation[12]

1982 Due to a plummeting demand in America for Lucas CAV's Microjector, its US Greenville plant shut down completely for 10 weeks putting 240 production and support workers out of work.[22]

1983 With Smiths Industries formed a joint venture on vehicle control systems, Lucas Electrical Electronics and Systems, bringing together 5 plants from each partner [23]

1996 Lucas Industries and the Varity Corporation of America merged to become LucasVarity plc[24]. Note: The first part of the Varity name is from the founder's initials - Victor. A. Rice

1999 LucasVarity was acquired by TRW, an American company.