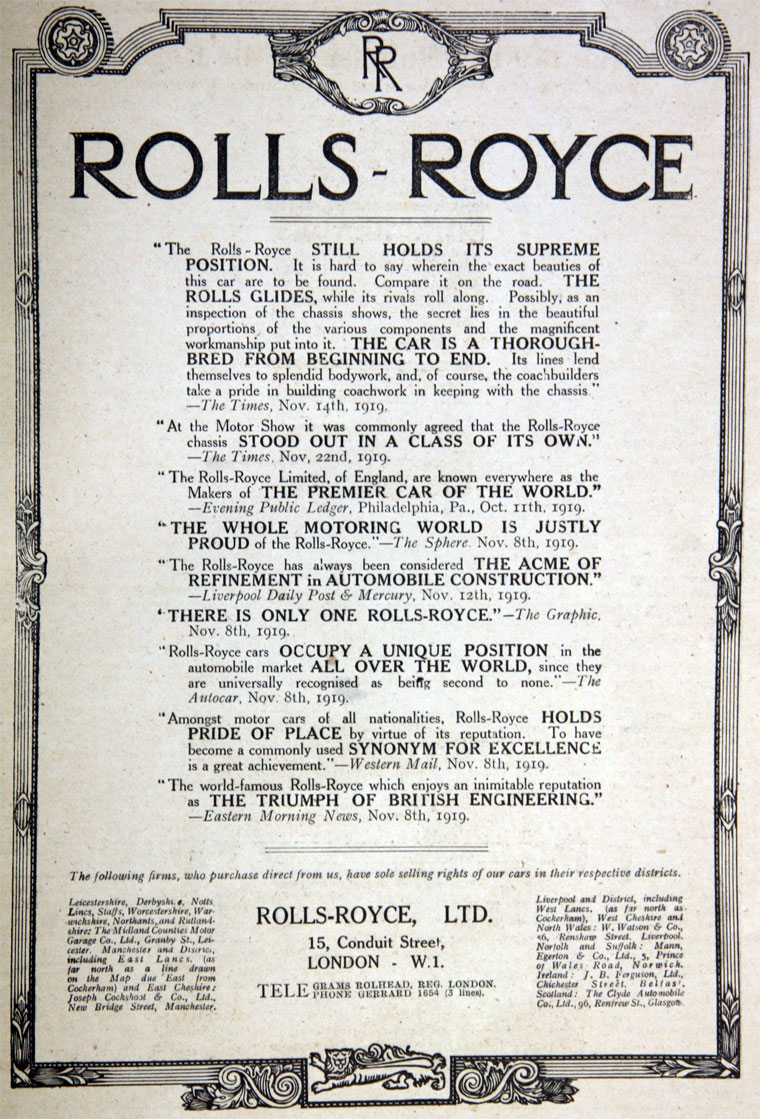 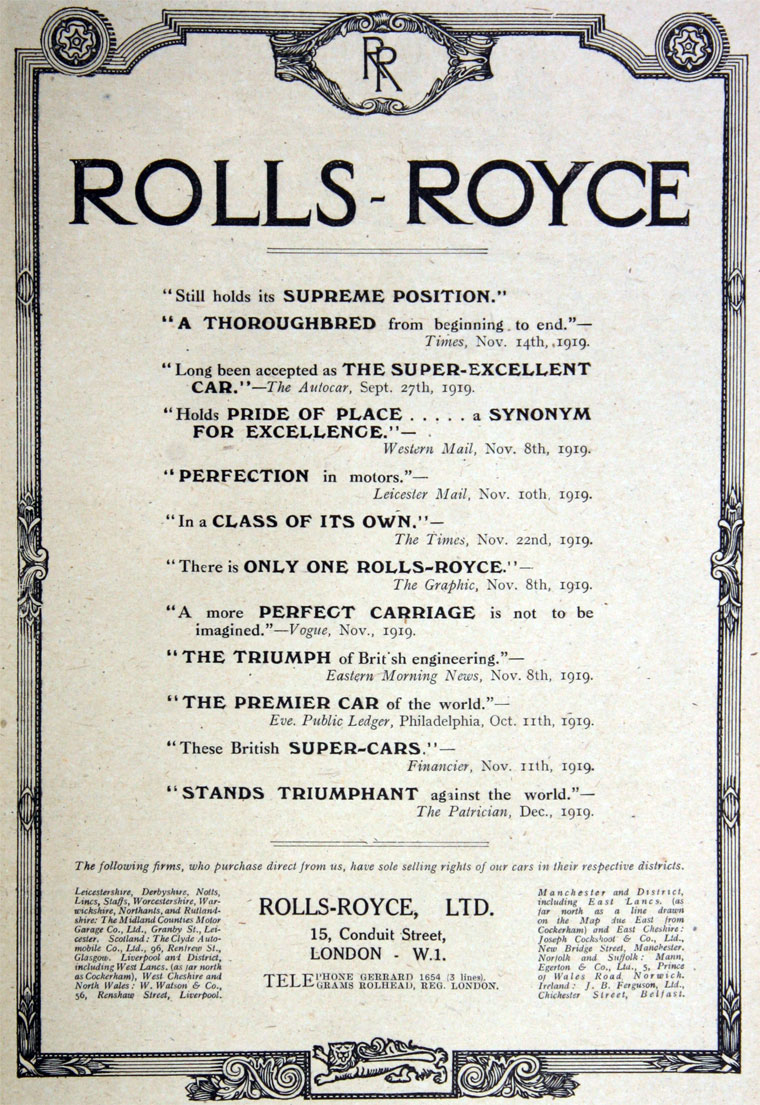 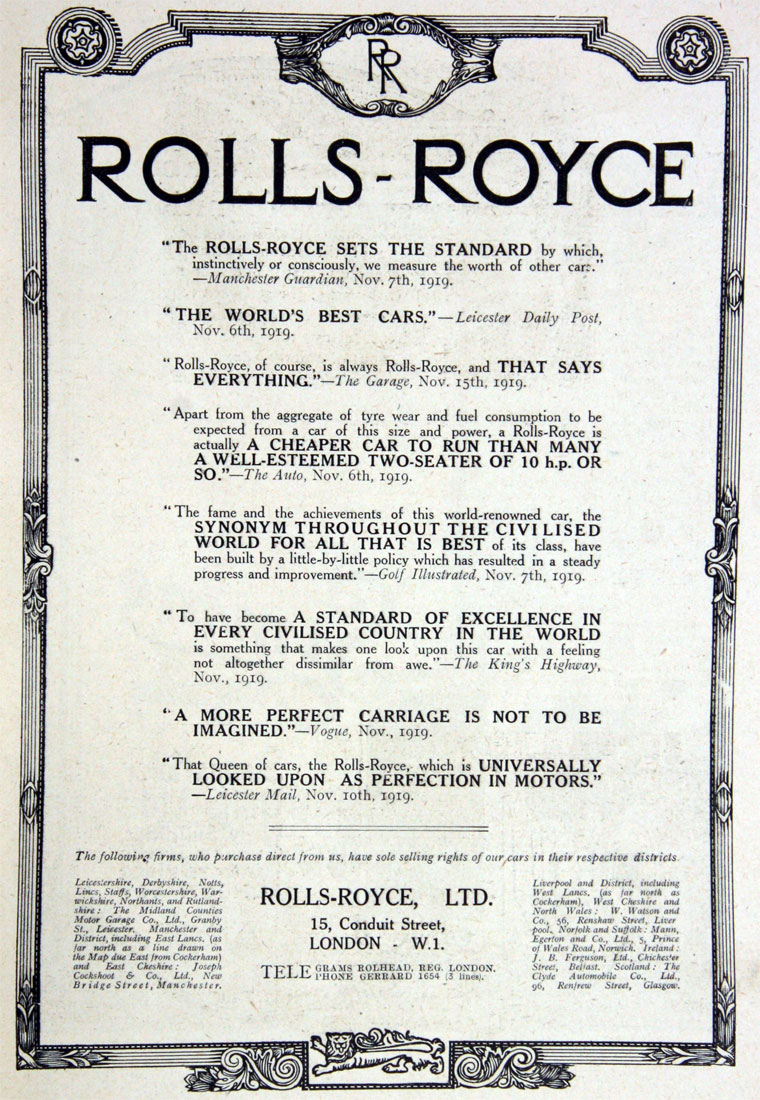 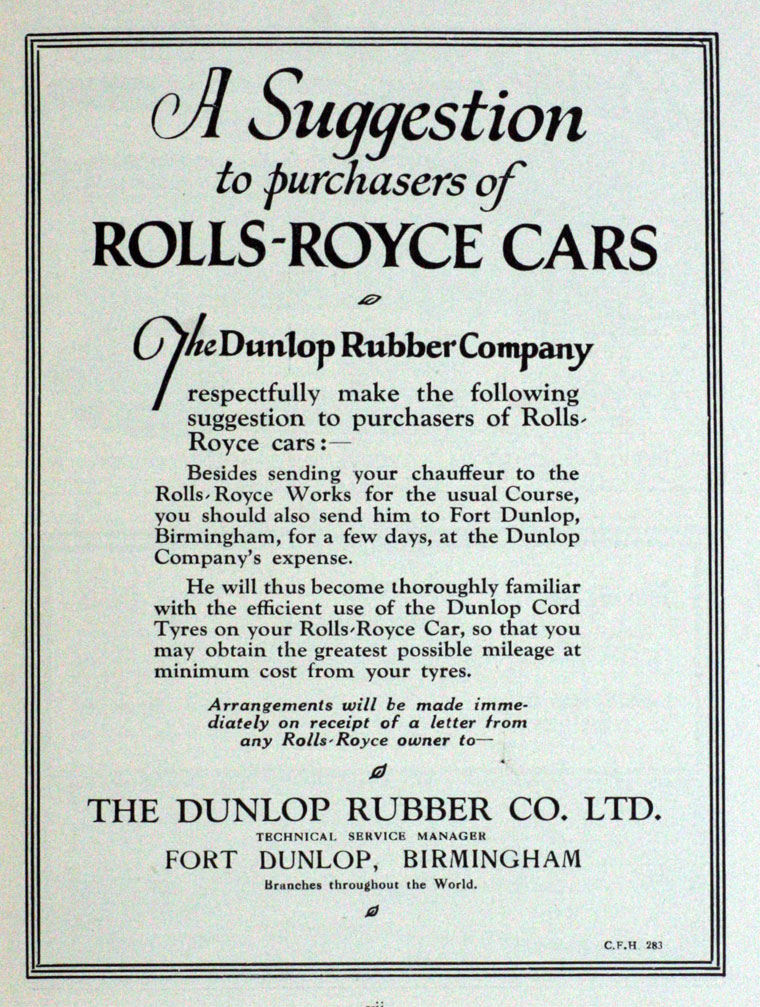 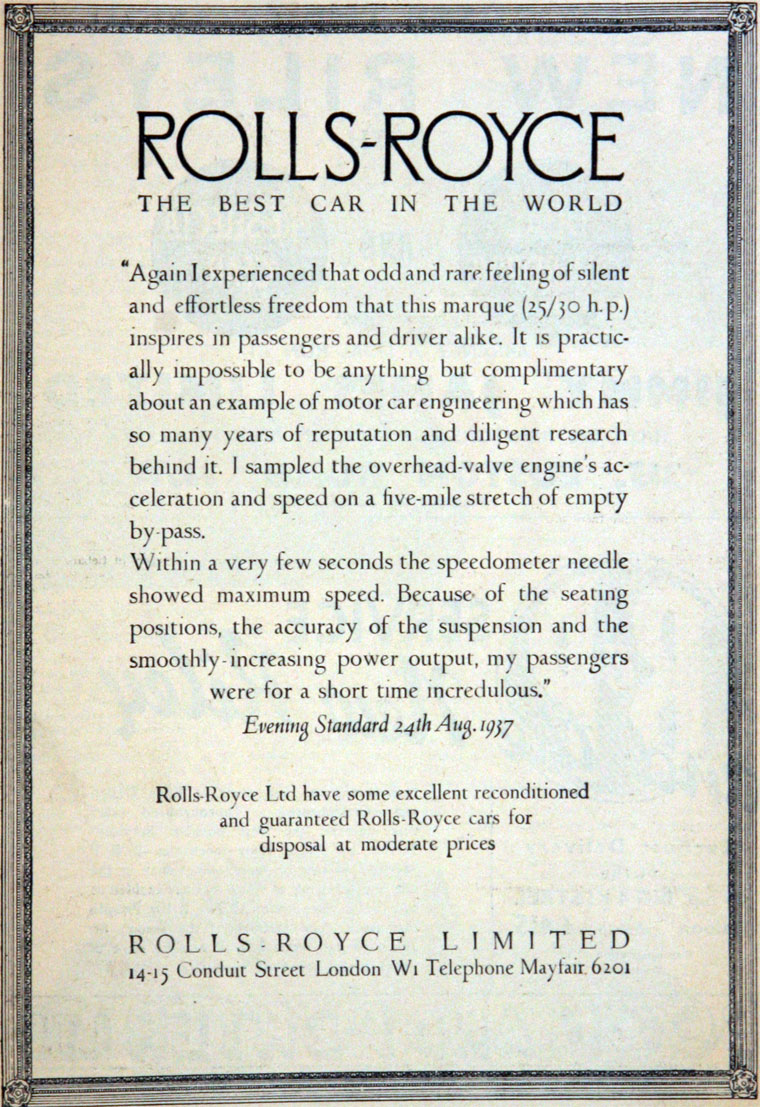 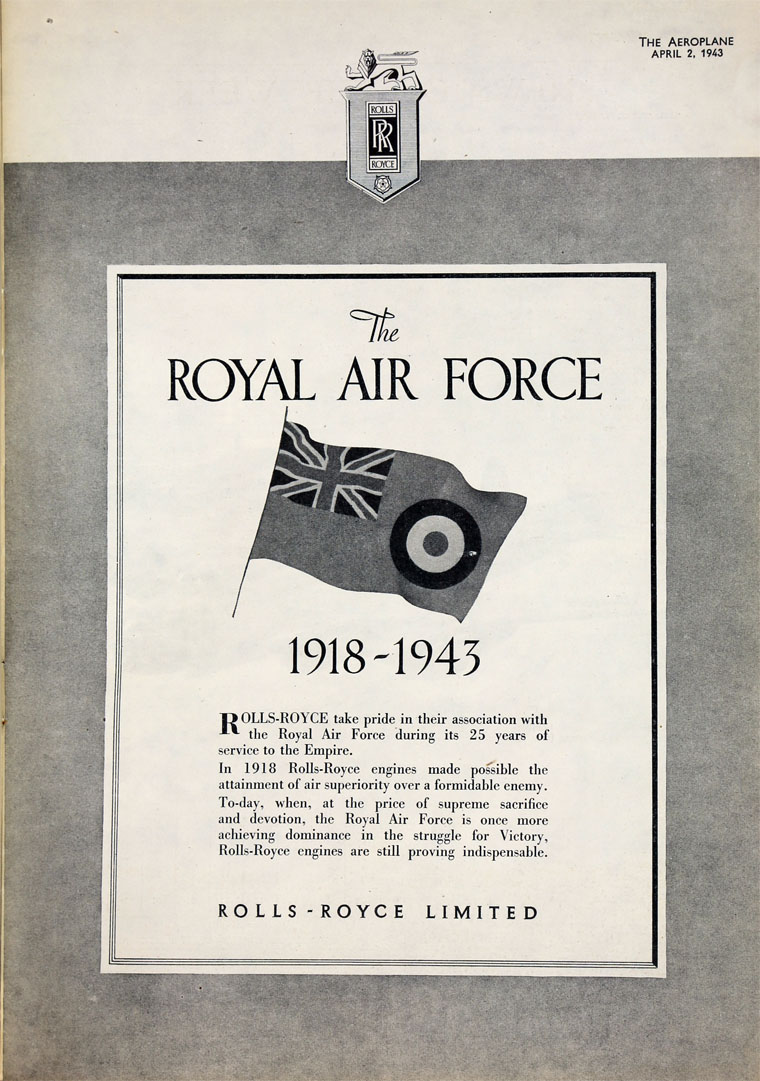 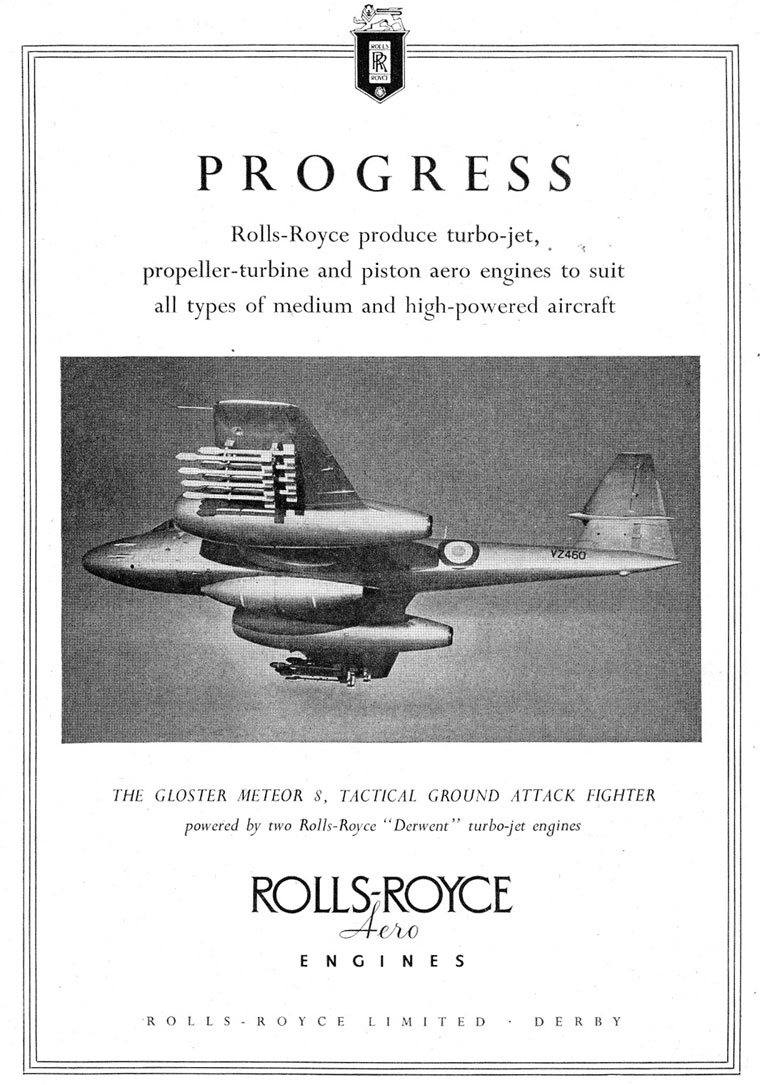 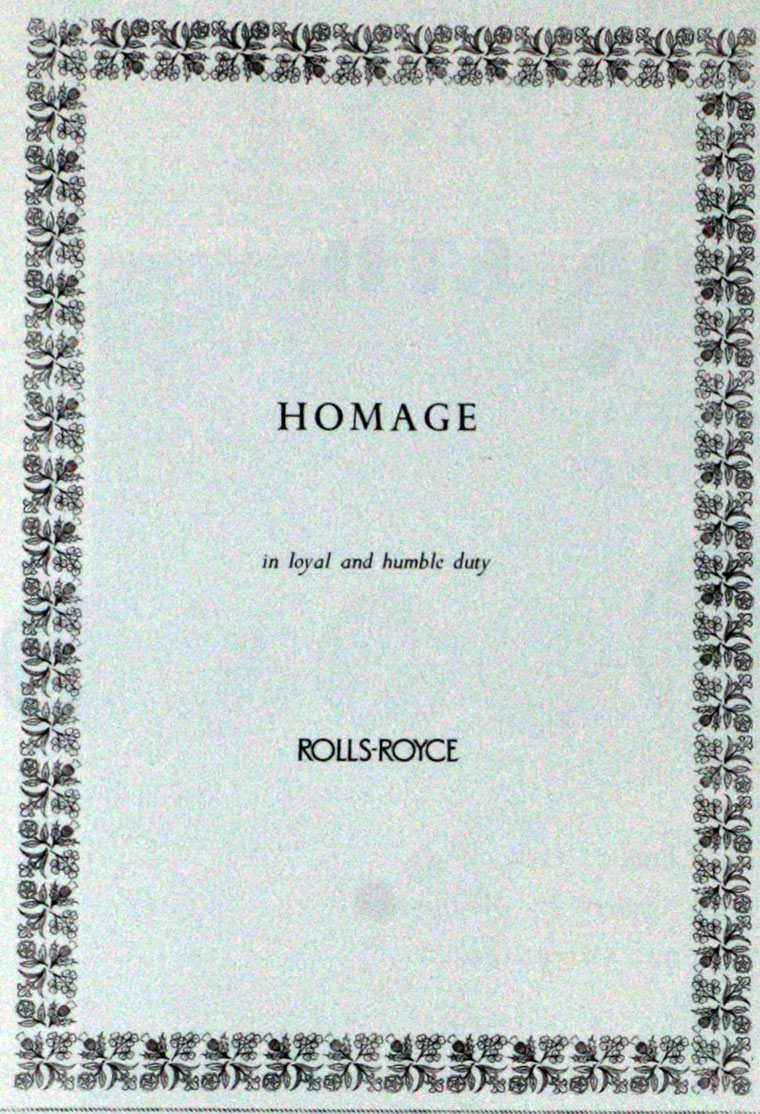 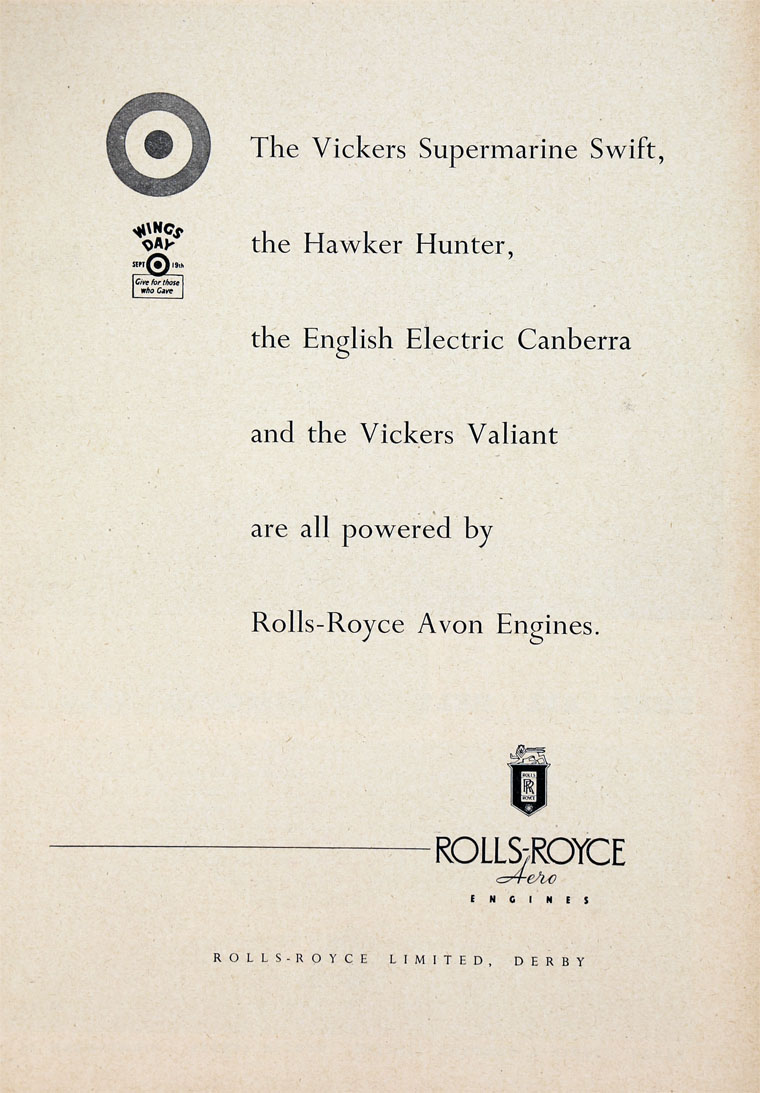 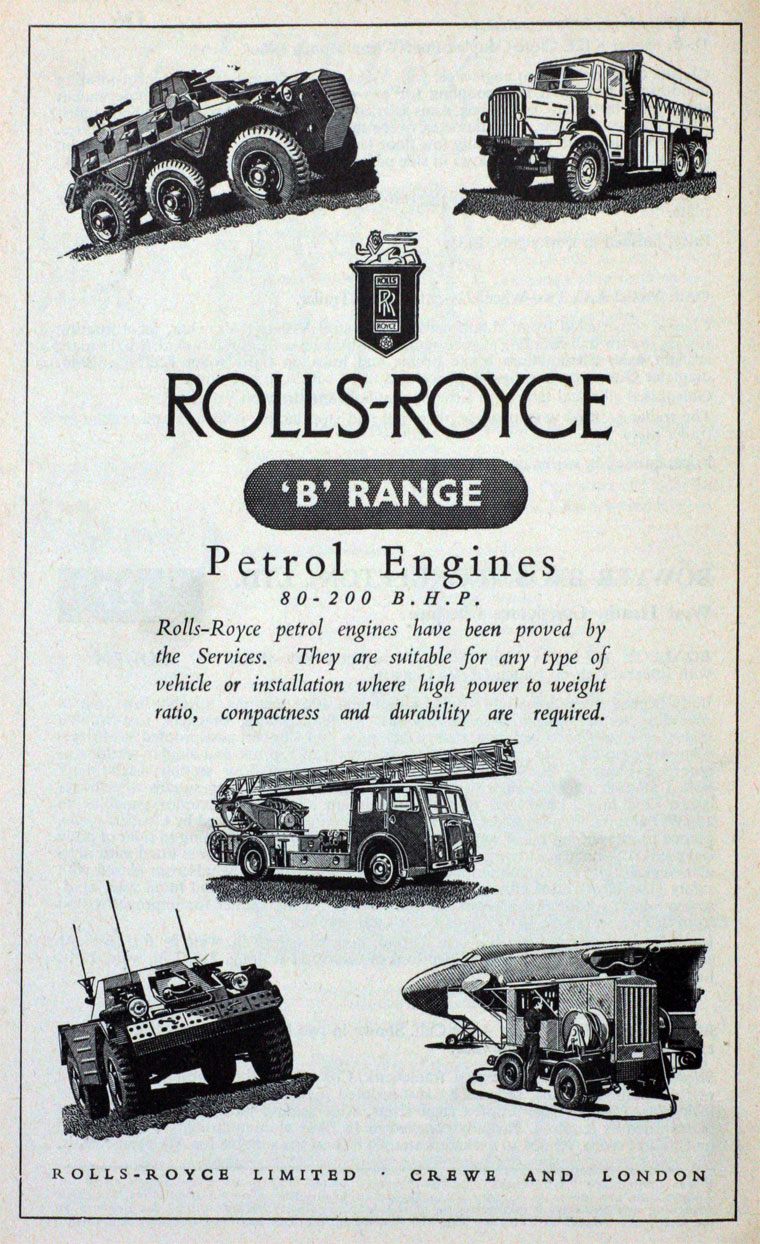 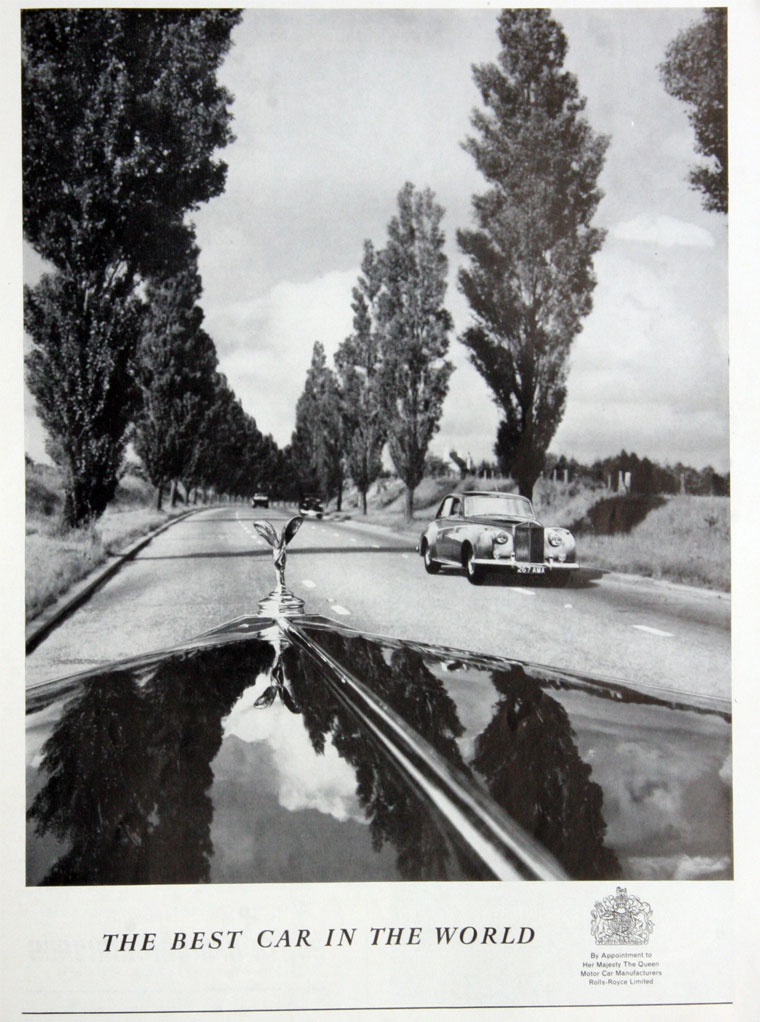 Electric motor made by Royce Ltd

1906 March 15th. The company was registered to take over the manufacture of the Rolls-Royce motor car from Royce Ltd [2] including the Cooke Street works.

1908 July 9th. The company moved from Manchester to a new factory at Nightingale Road, Derby[5] designed by Royce. The factory was built by Andrew Handyside and Co

1910 Claremont is Chairman, Briggs and Scott are re-elected as directors. [6]

1910 April. C. S. Rolls resigned his position of Technical Managing Director of Rolls-Royce in order to concentrate on his aviation interests[7]; he became an adviser to Rolls-Royce

1910 After the death of Rolls in a flying accident, his shares were acquired by the future Lord Beaverbrook, who held them for a few years but did not gain control of.the company[8]

WWI The company was concerned that the outbreak of war would curtail demand for their luxury automobiles but they did not plan to make aero-engines. However, after a request from the Royal Aircraft Factory, they did tender to build some Renault aero-engines. Unimpressed by the design of these engines, Royce was inspired to design his own aero-engine, which became the Eagle, a V12 engine that went on to be used in a number of military aircraft.

In order to keep up with demand once the Eagle was established, the War Office tried to persuade the company to allow other UK manufacturers to contribute production resources but the company resisted this. Instead there was a big expansion of the Derby factory but Brazil, Straker and Co were also allowed to build Eagles and the smaller Falcon engine; Brazils also built the 6-cylinder variant, the Hawk.

c1918 Arthur Wormald is MD of the Derby works. A. J. Rowledge is Chief Assistant Engineer.

At some point established the first test-bed in the Sinfin Lane area of the Derby site.

1919 Established a factory in America

1919 The design team was headed by Timothy B. Barrington with A. G. Elliott and Bernard Day assisting. R. C. Hall looked after metellurgy.

1921 The company opened a second factory in Springfield, Massachusetts.

WWII Opened a new factory at Hillington near Glasgow to make components for aero-engines and eventually complete engines, supplementing production at Derby and Crewe.

As well as producing key aero-engines such as the Merlin, Rolls-Royce took over production of the Whittle jet engine from Rover.

1953 Completion of the East Kilbride factory.

1956 Acquired Sentinel for its factory and production capacity[11]

1971 Financial problems caused largely by development of the new RB 211 turbofan engine led — after several cash subsidies — to the company being nationalised by the Heath government in 1971. (Delay in production of the RB211 engine has been blamed for the failure of the technically advanced Lockheed TriStar, which was beaten to launch by its chief competitor, the Douglas DC-10.)

1971 The receiver created a new company, Rolls-Royce Motors, to contain the profitable parts of the company including the car manufacturing division, the marine and industrial diesel engines, military vehicle operations and rights to the Wankel engine. The new company included the coach building businesses of H. J. Mulliner, Park Ward and Bentley Motors (1931)[14]. The gas turbine businesses were put into a new company Rolls-Royce (1971) Ltd[15]

1973 Having failed to attract sufficiently high offers in the sale by tender, the automobile business was spun off as a public company, Rolls-Royce Motors Ltd[17]. The main business of aircraft and marine engines remained in public ownership until 1987, when it was privatised as Rolls-Royce plc, one of many privatisations of the Thatcher government.

See the successor companies for later history of Rolls-Royce