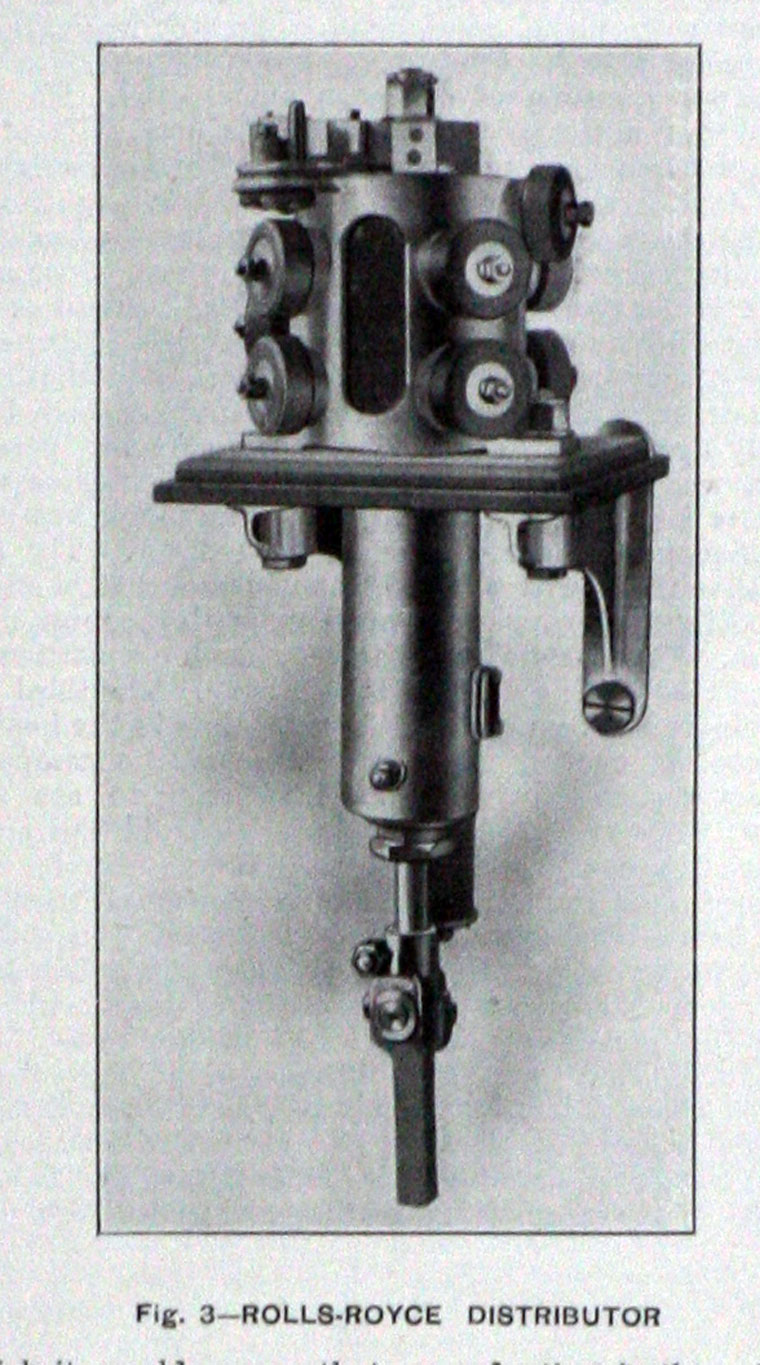 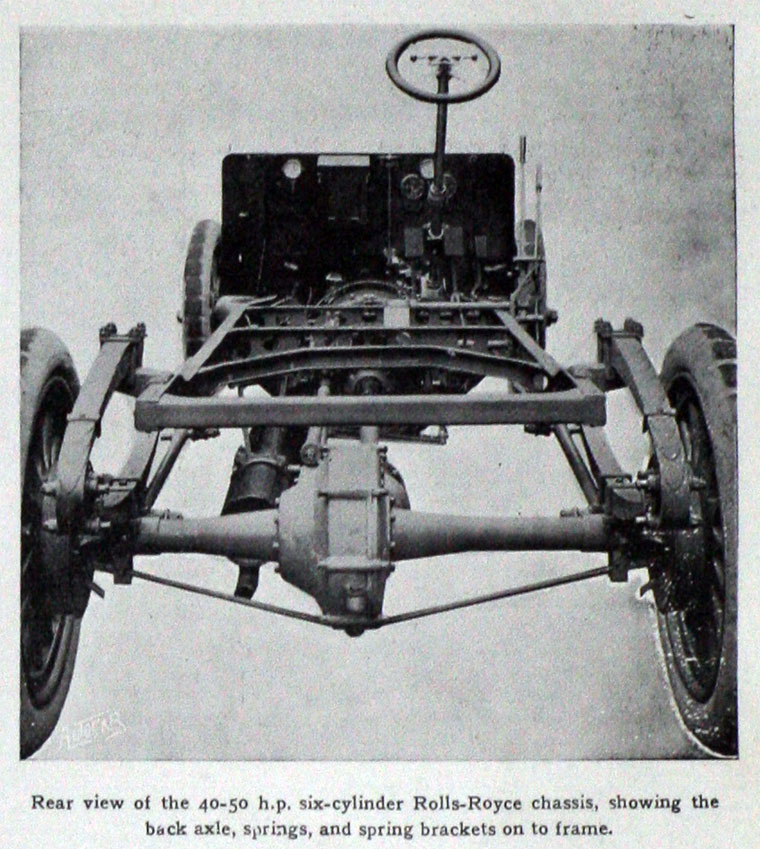 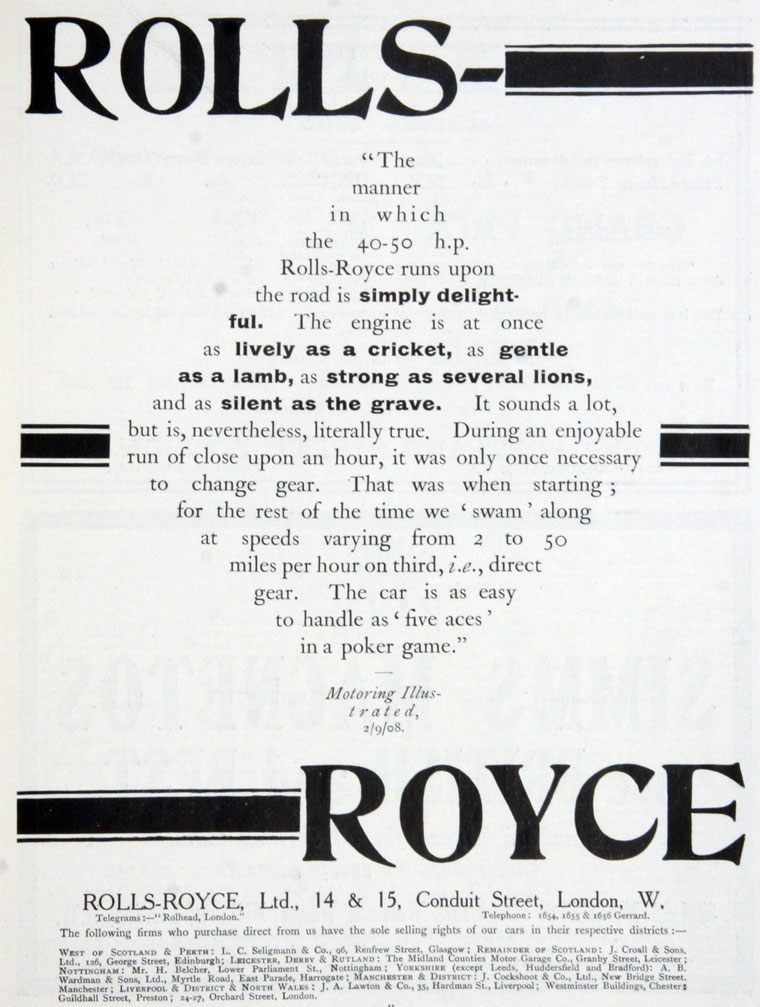 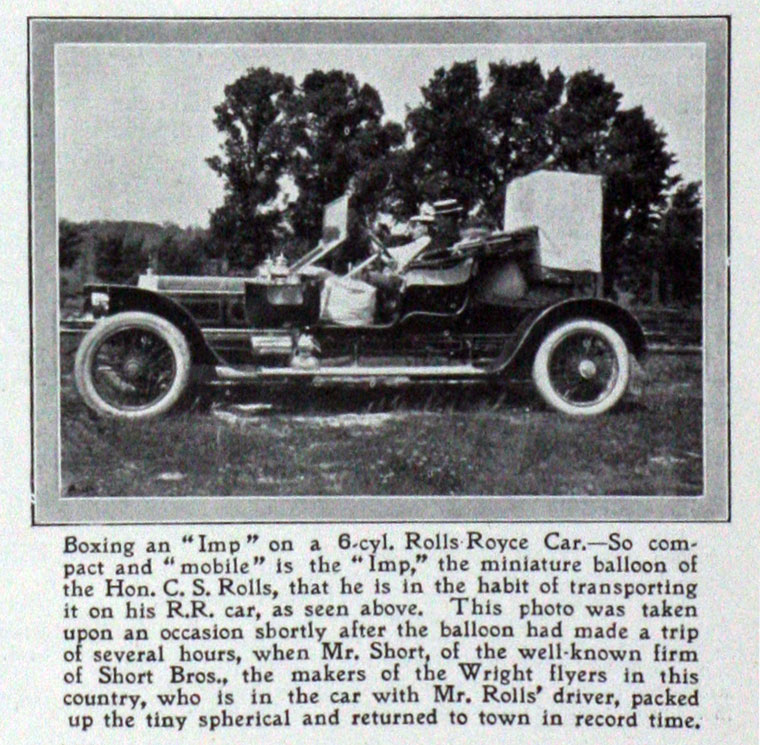 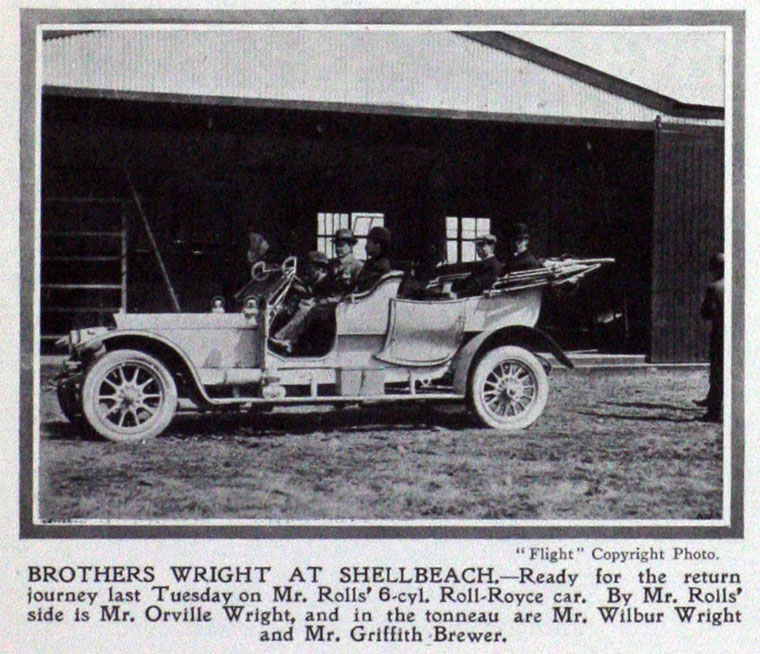 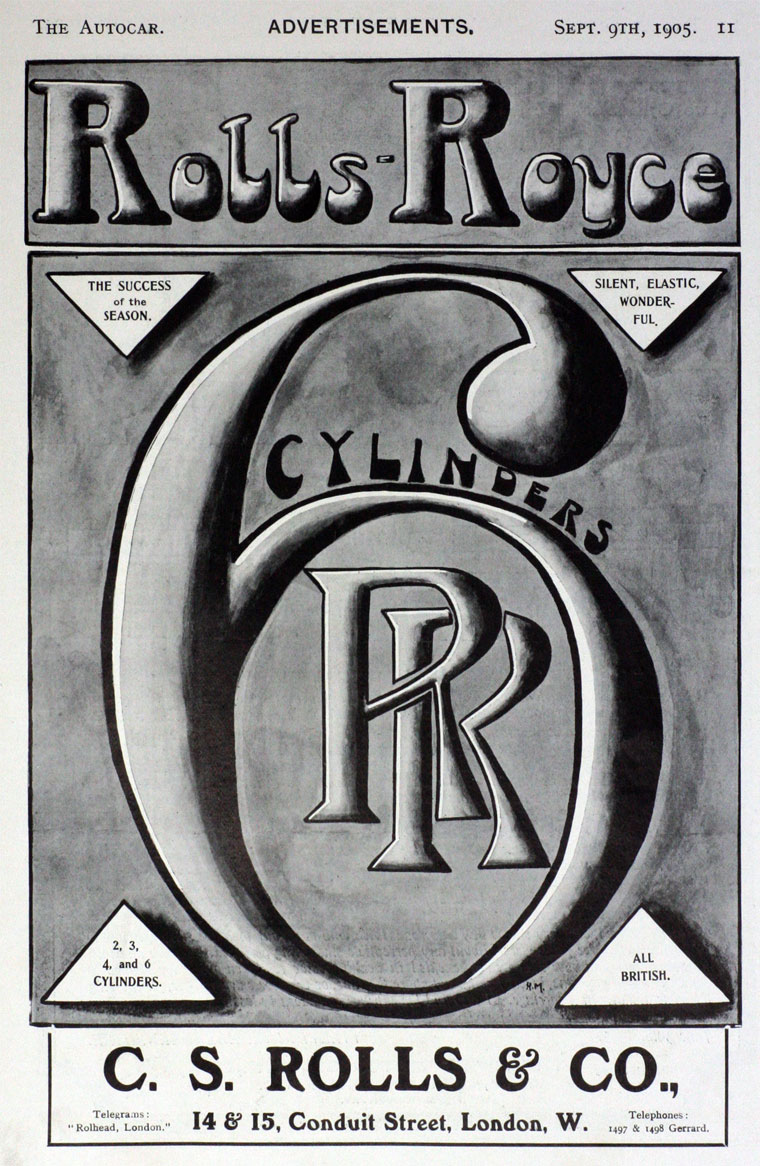 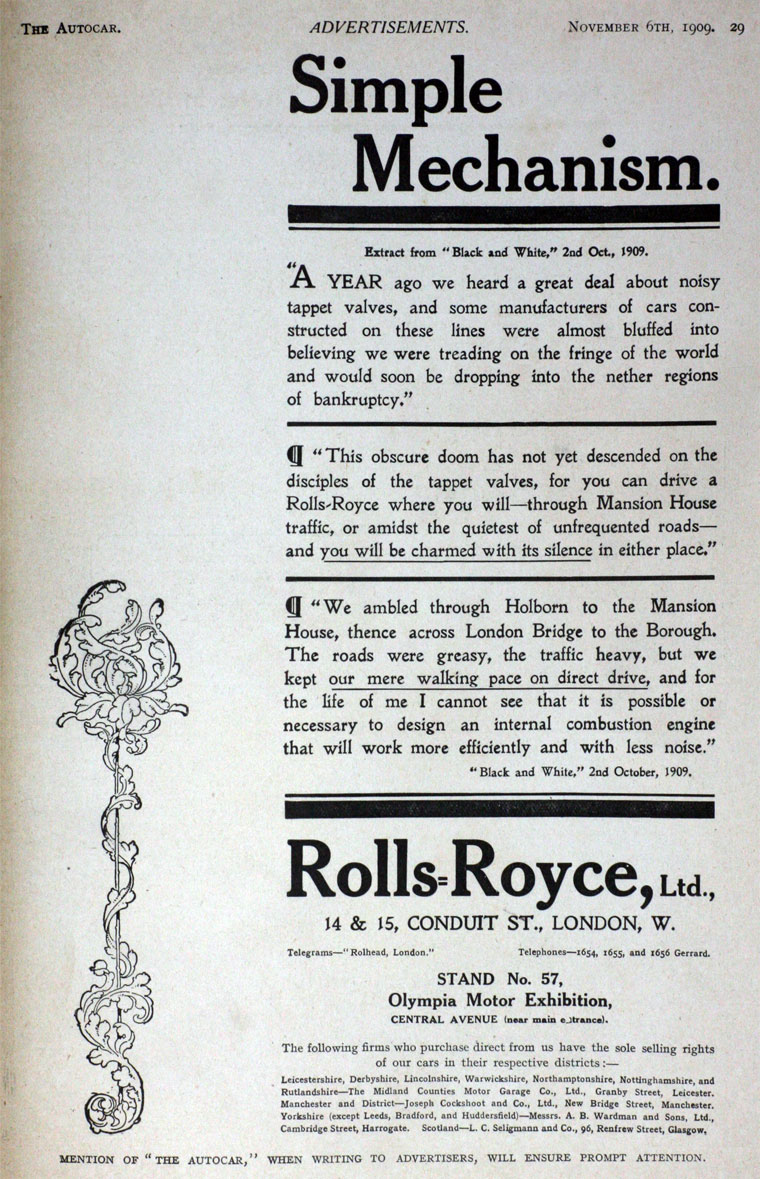 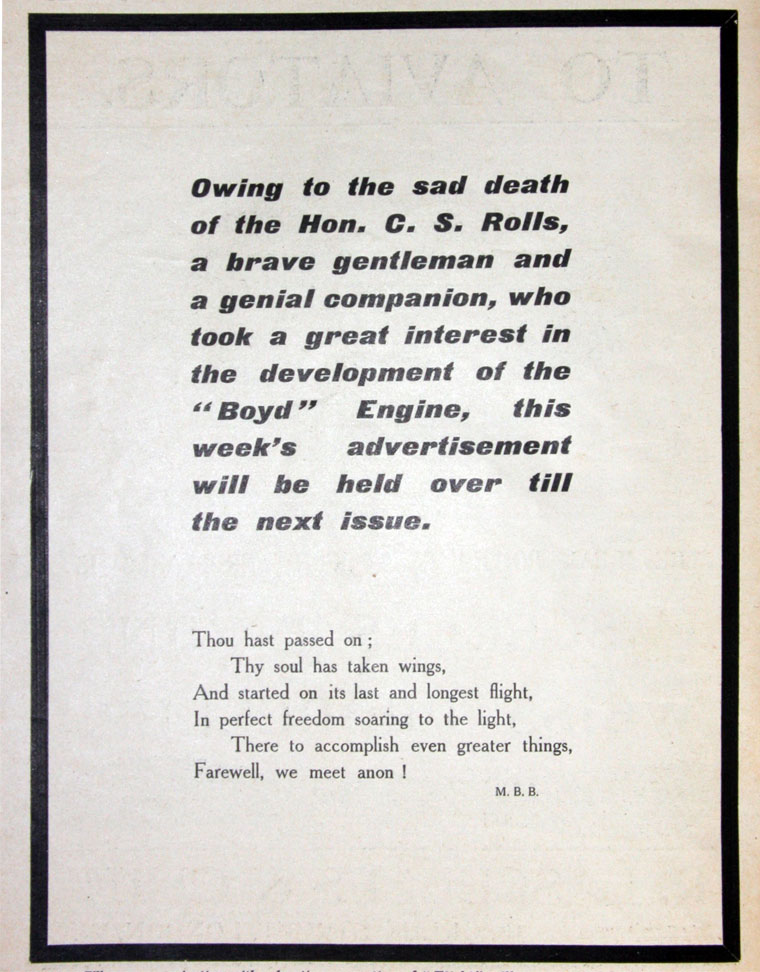 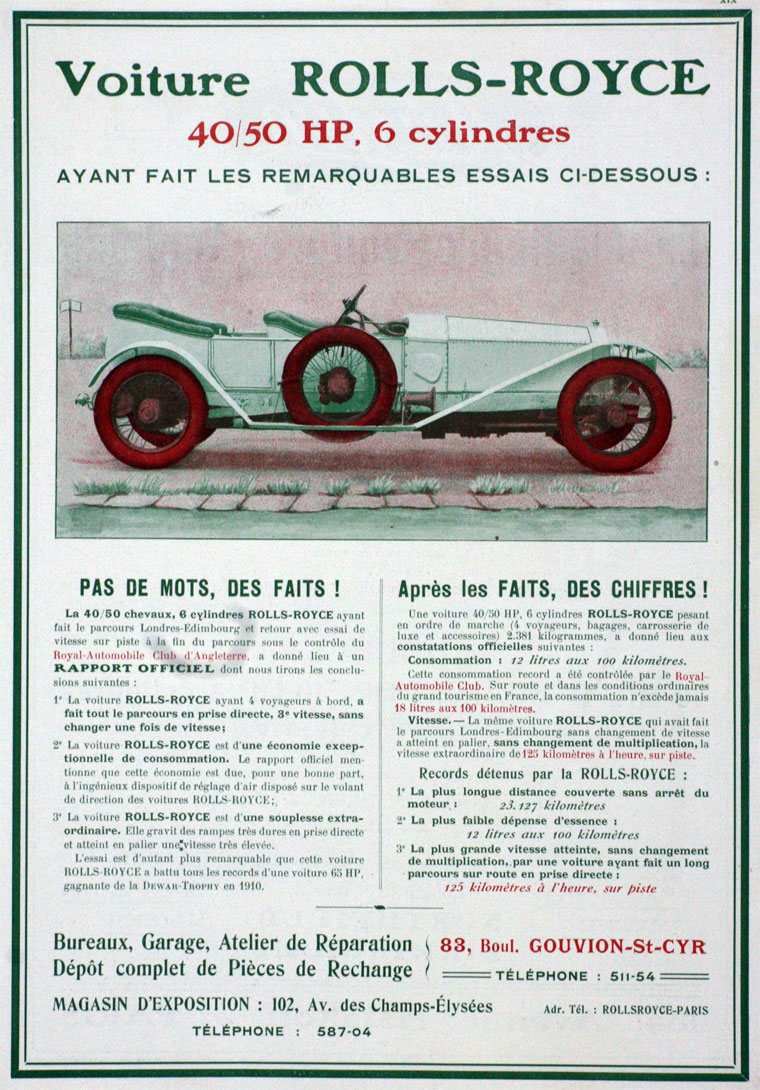 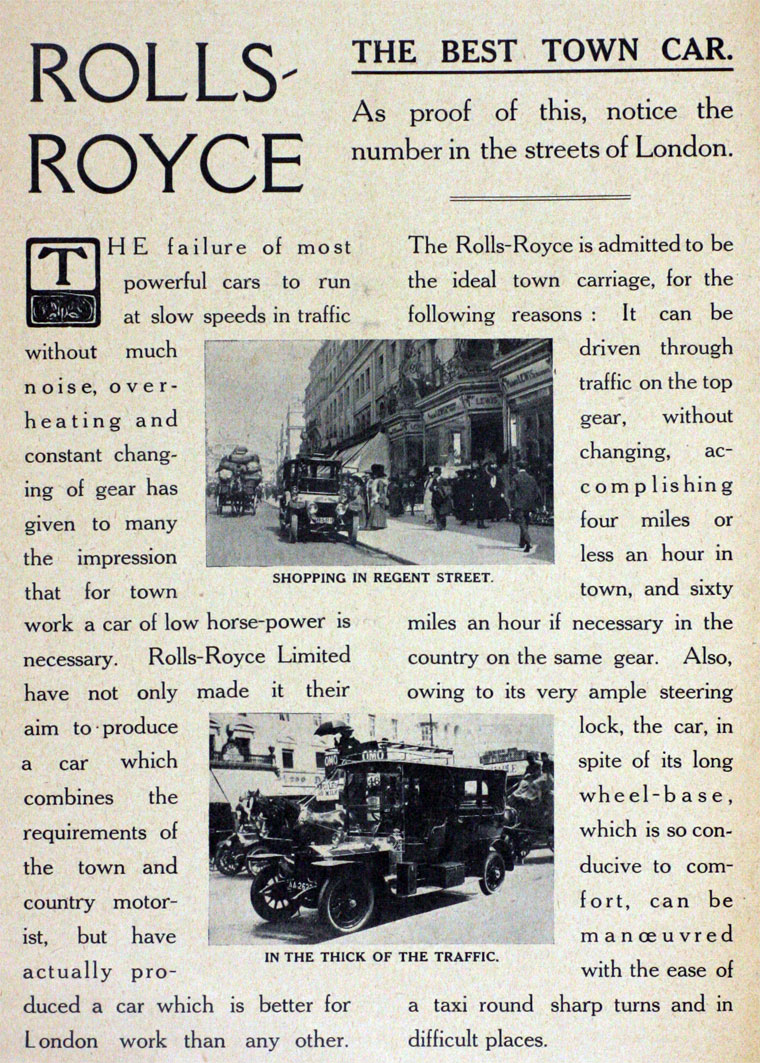 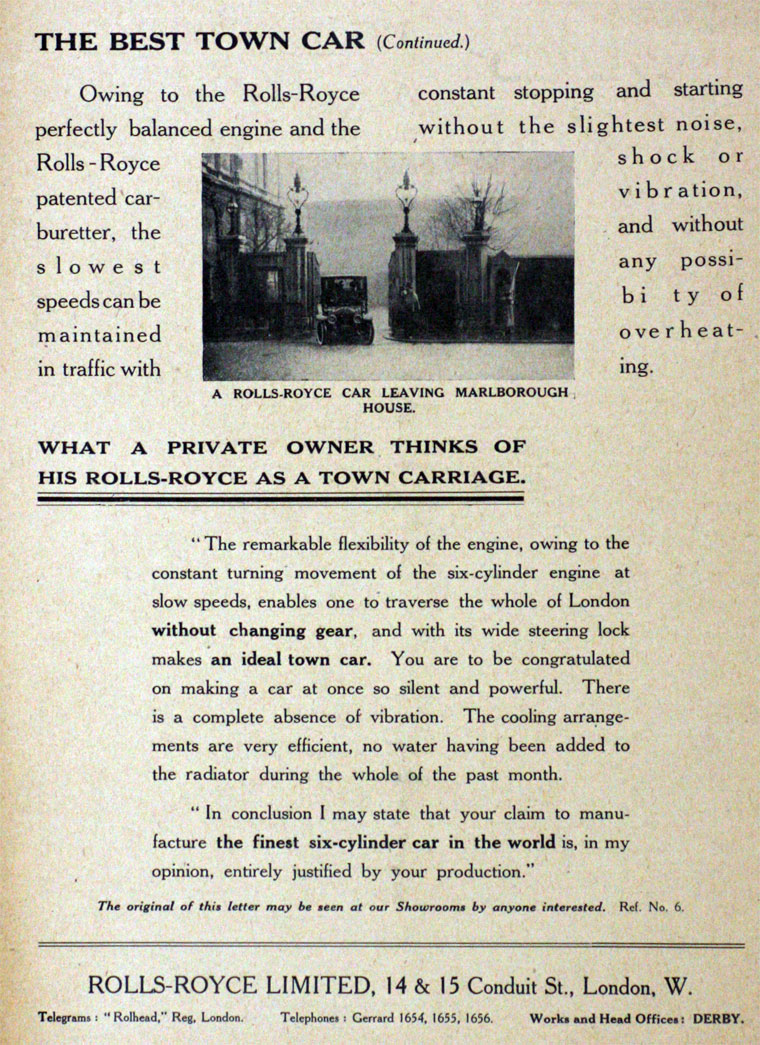 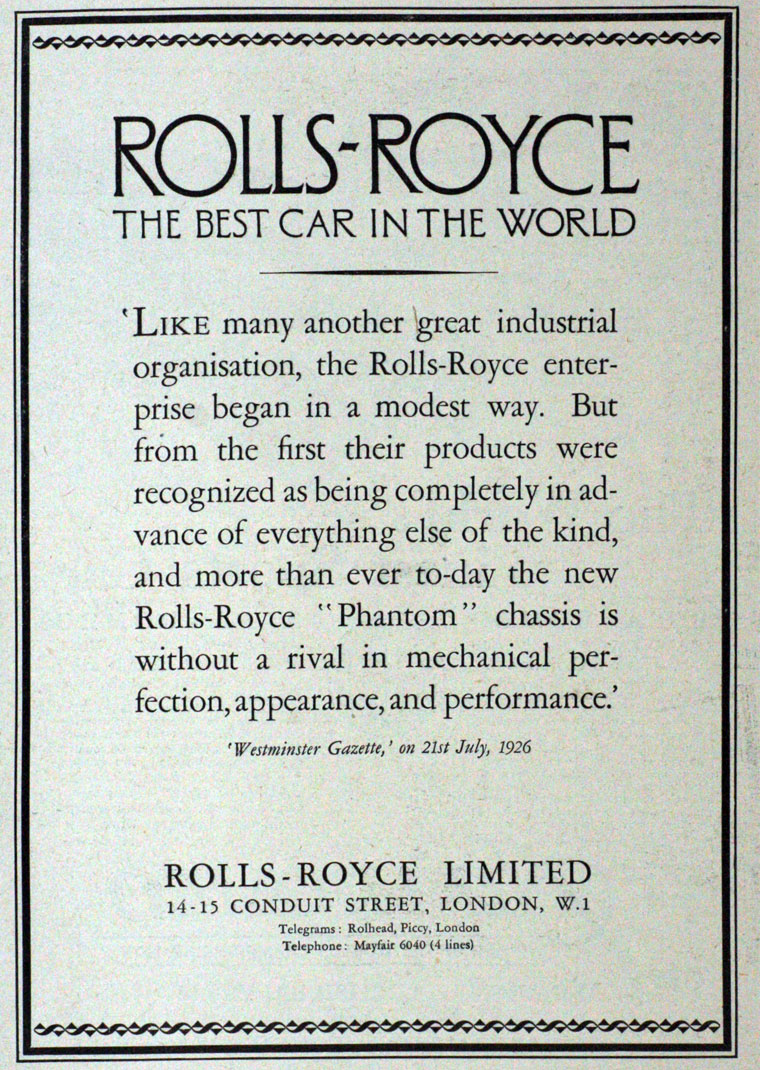 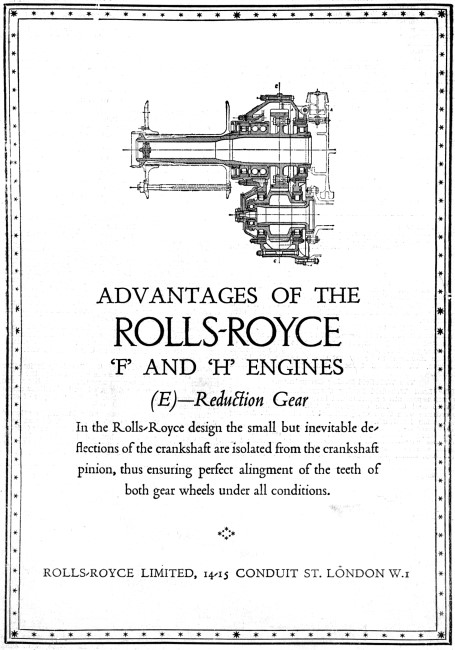 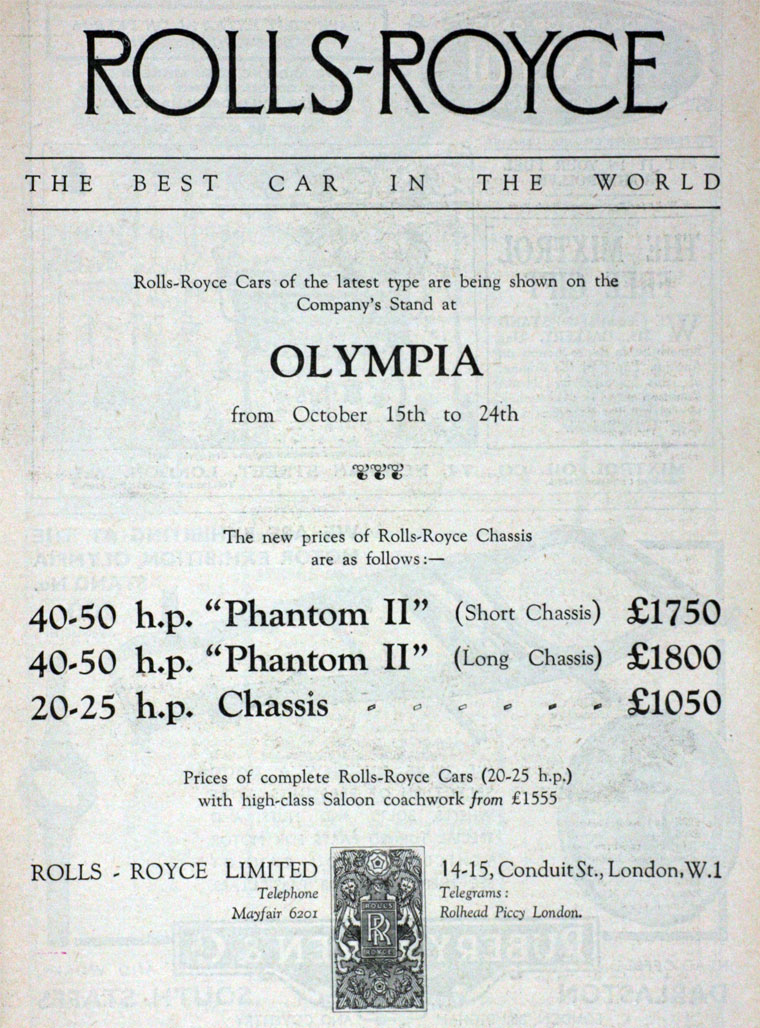 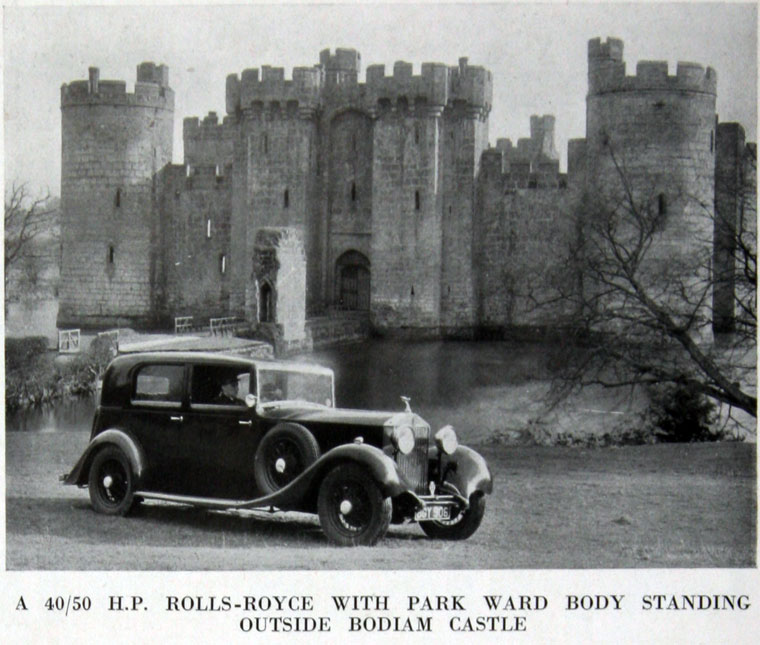 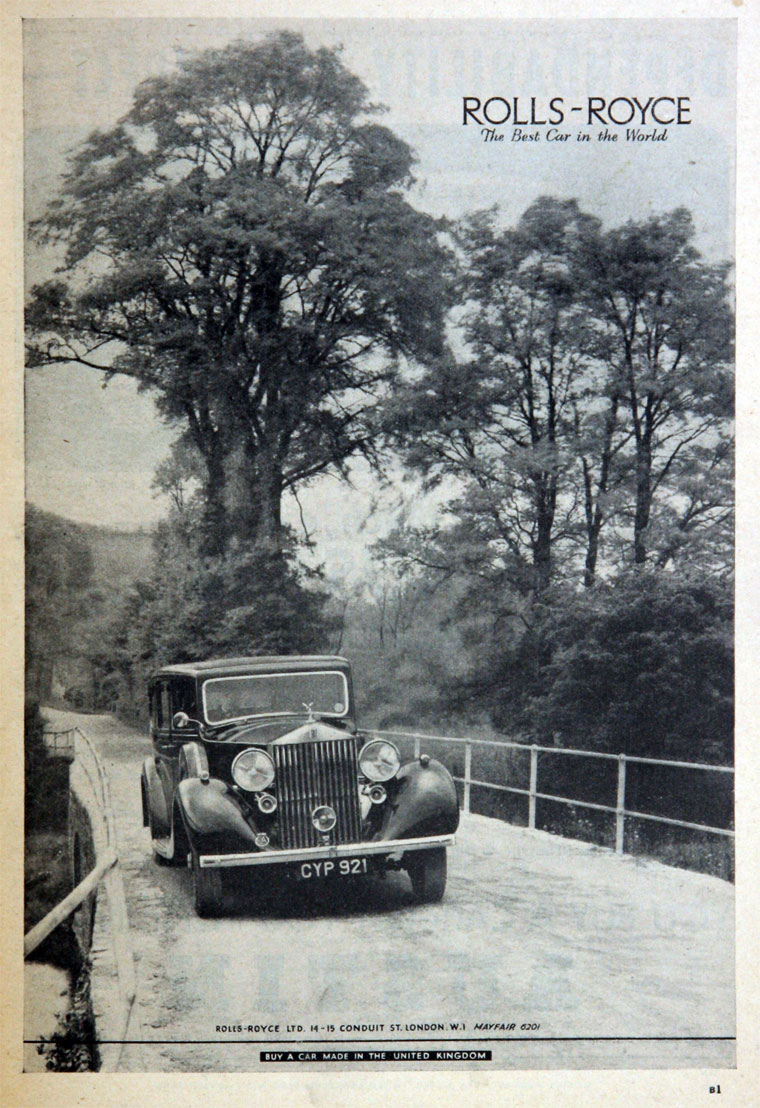 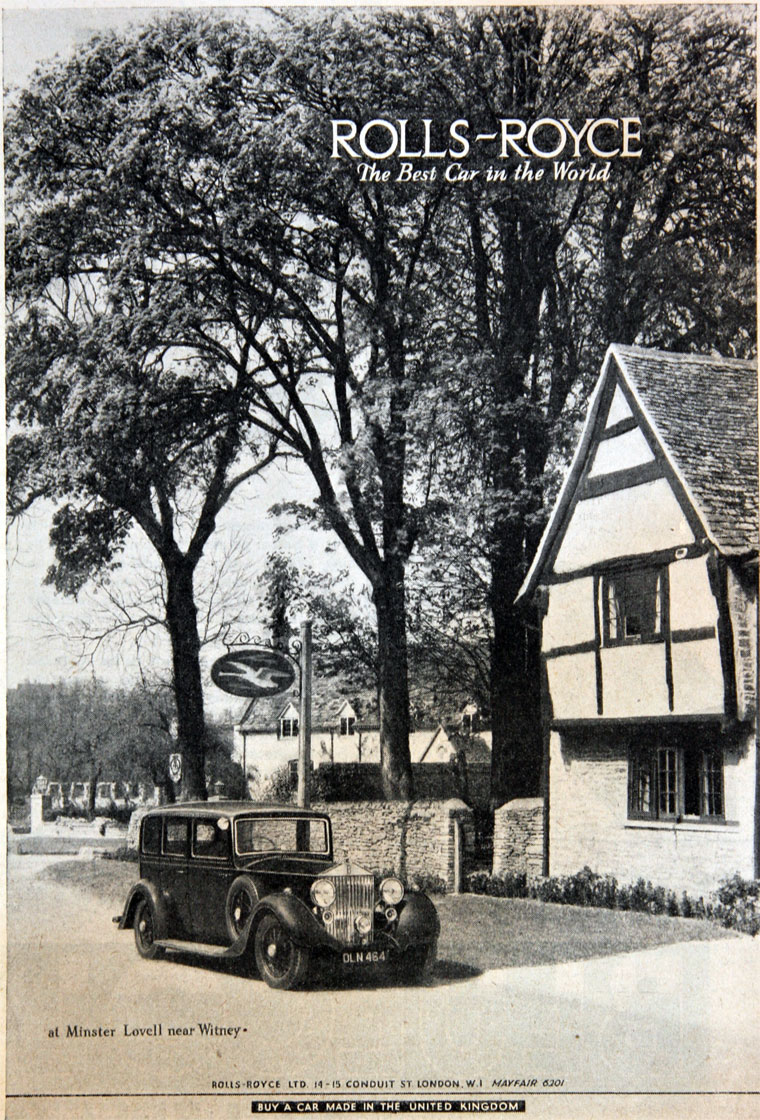 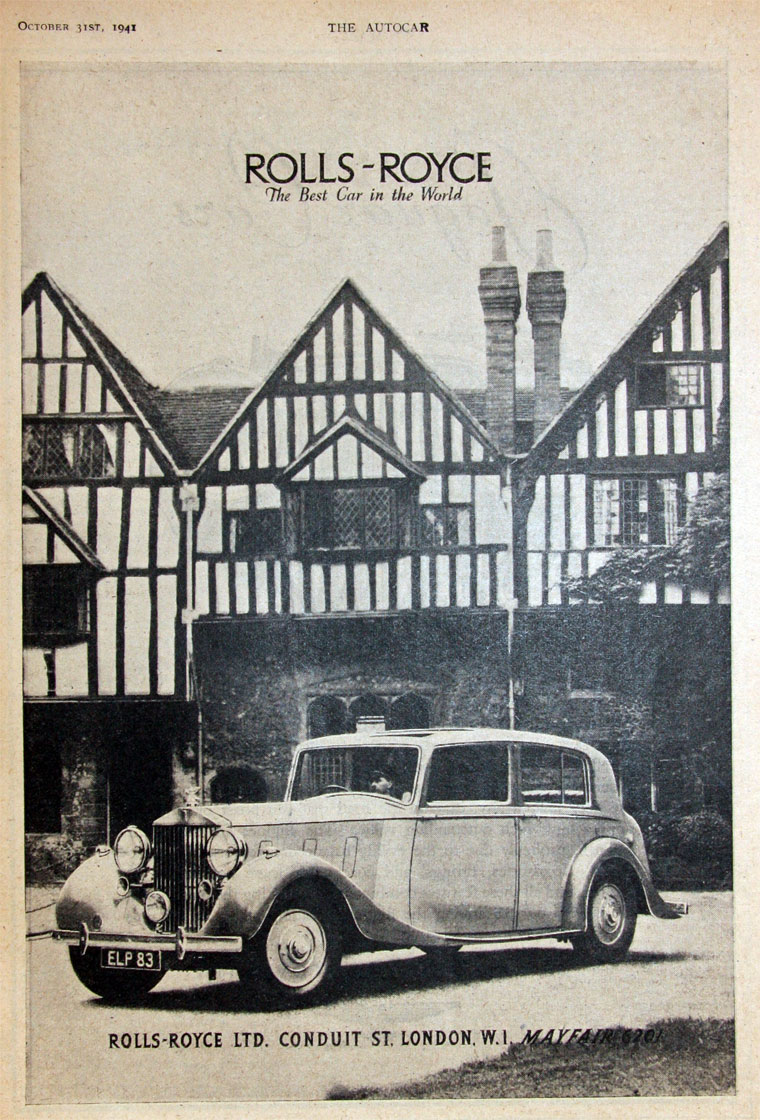 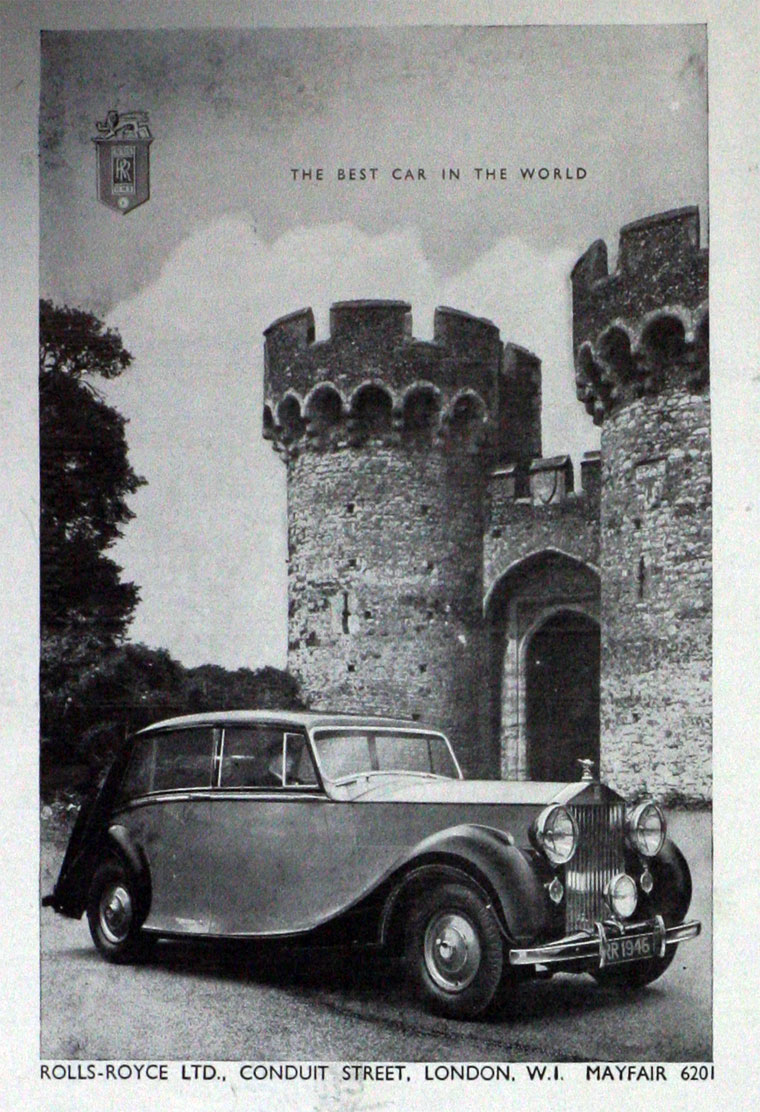 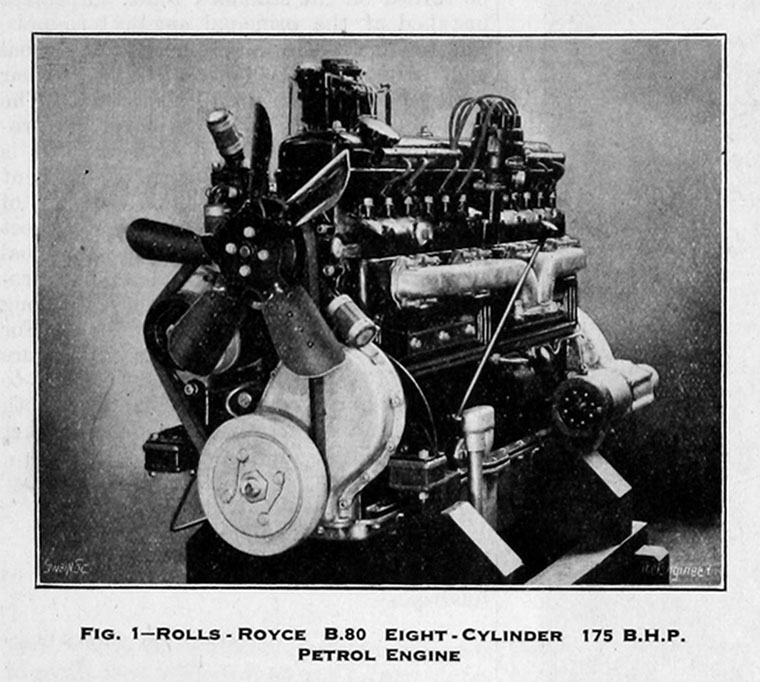 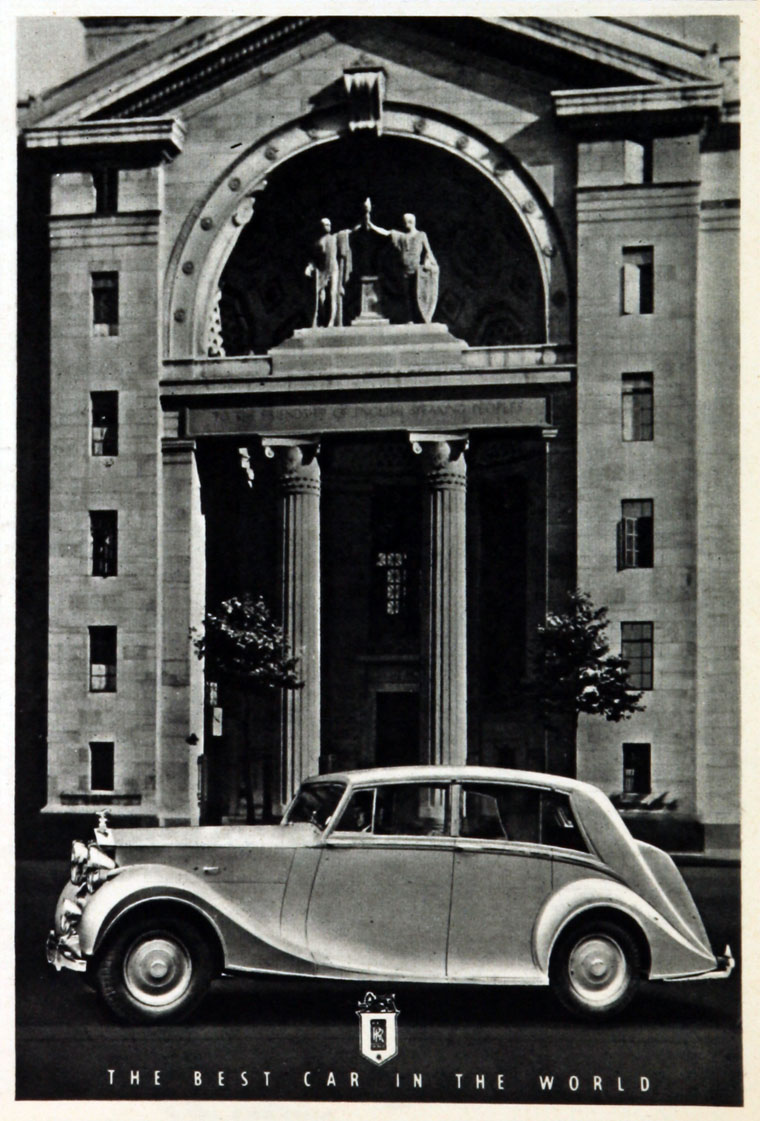 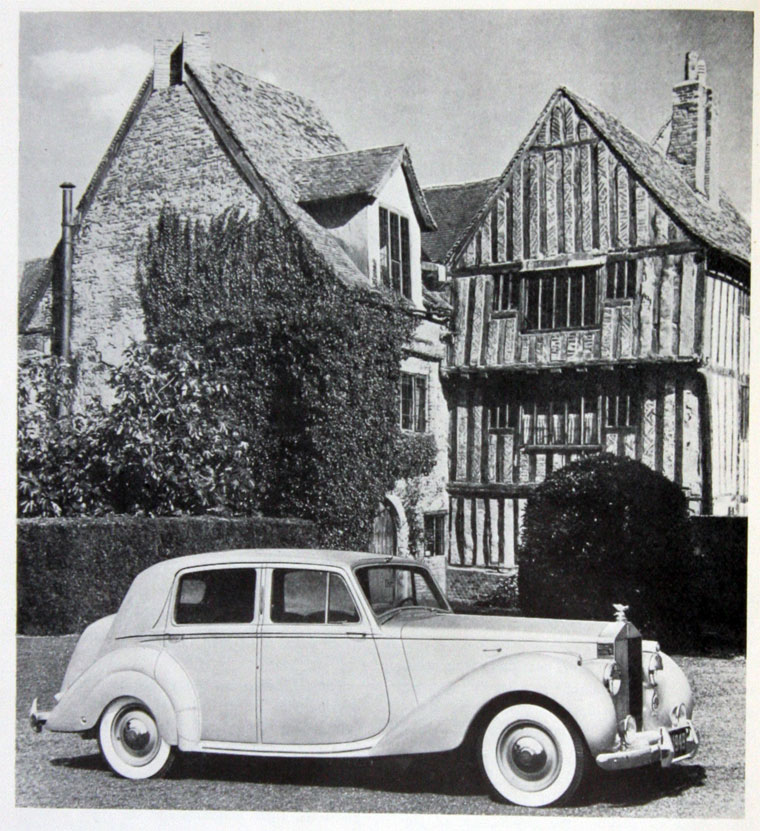 1904 Frederick Henry Royce made his first car, a Royce, in his workshop in Cook Street, Manchester with the help of apprentices George Eric Platford and Tom Haldenby. The engine was a vertical tandem two-cylinder with 95mm bore and 127mm stroke. It had three-speeds and a reverse.

1904 18/19th April. One of his cars was used to carry H. Massac Buist, an Automobile Club observer from London to Margate in the course of a non-skid trial organised by Basil Humbert Joy. [1]

1904 May 4th. He was introduced to Charles Stewart Rolls at the Midland Hotel in Manchester and the pair agreed to a deal where Royce would manufacture cars, to be sold exclusively by Rolls. A clause was added to the contract stipulating the cars would be called Rolls-Royce.

1904 Engine (10 hp) made by Royce Motors at the Cook Street factory. Exhibit at Manchester's Museum of Science and Industry.

1905 February. Exhibited the four-cylinder model at the Olympia Motor Show and this was later known as the 'heavy twenty' model. The car as then sold to Arthur Harry Briggs

1905 September. Percy Northey comes second in the 1905 Tourist Trophy Race in a 'light-twenty' at an average speed of 33.7 mph

1905 November. Details of the eight-cylinder Landaulet.[10]

1908 Ran a 15,000 mile trial under RAC scrutiny in a 40/50 Silver Ghost and the drivers were Rolls, Johnson, George Eric Platford and R. J. Mecredy. This car was later purchased by Dan Hanbury and ran well for another 350,000 miles.

1908 Ernest Hives joins the company as a tester. Briefly worked for them before in 1903

1908 March. At a Board Meeting Claude Johnson persuade the board to adopt the 'one-model' policy

1911 Silver Ghost driven from London to Edinburgh and back in top gear with a petrol consumption of 24.32 mpg. The same car was then driven at Brooklands with adjustment and attained a speed of 78.26 mph. [1]

1920 November. Exhibited at the Motor Car Show at Olympia and the White City with three cars all with the 40-50 hp six-cylinder engine. [20]

1921 The company opened a second factory in Springfield, Massachusetts (in the United States to help meet demand), where a further 1,701 "Springfield Ghosts" were built. This factory operated for 10 years, closing in 1931. Its chassis was used as a basis for the first British armoured car used in both world wars. In the 1920s Charles Jenner chief engine draughtsman. Day oversaw chassis design and Ivan Everden coordinated the work of the chassis engineers and the coachbuilding companies that bodied the chassis.

1922 The Bombay to Poona reliability trials and hill-climbing contest resulted in three Rolls-Royce cars finishing first, second and third. The fastest time was made by a Rolls-Royce landaulette, which ran up the Ghauts in 11 minutes.[21]

1925 The first of the Phantoms appeared

1931 The company acquired rival car maker Bentley, whose finances were unable to weather the Great Depression. From then until 2002, Bentley and Rolls-Royce cars were often identical apart from the radiator grille and minor details.

1959 It opened at Mulliner Park Ward, London as the company started to build bodies for its cars for the first time: previously it had built only the chassis, leaving the bodies to specialist coach-builders.