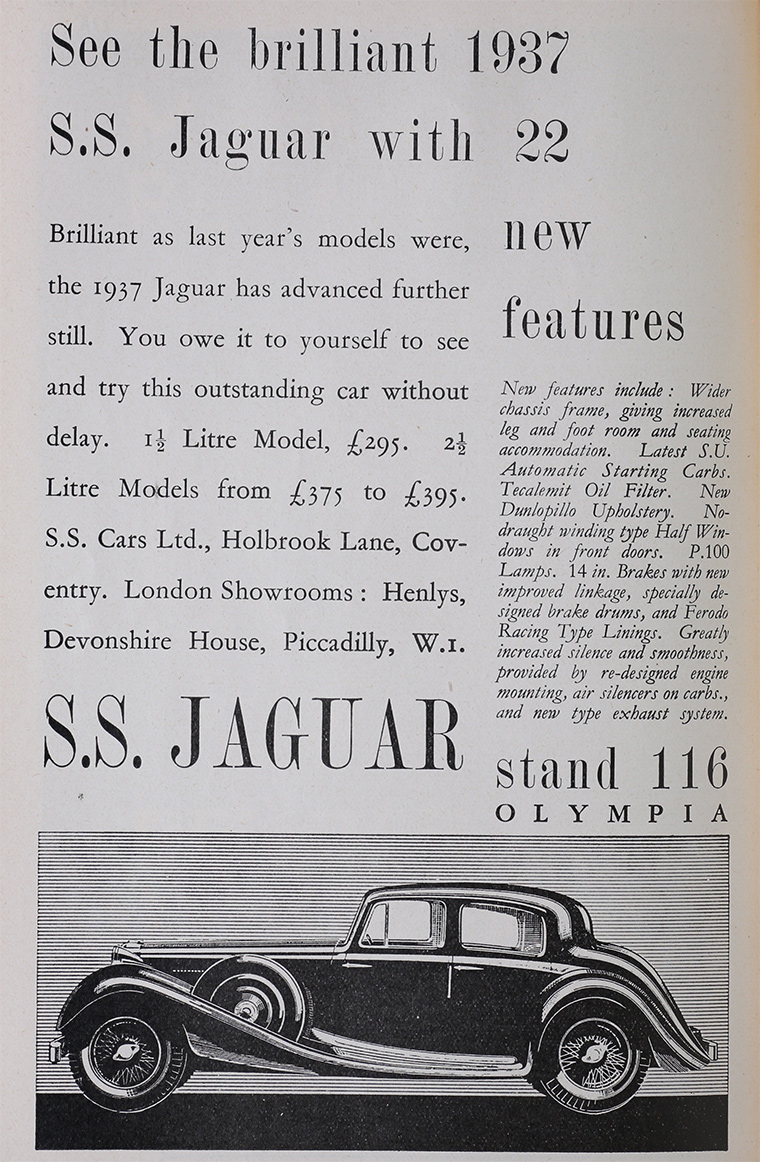 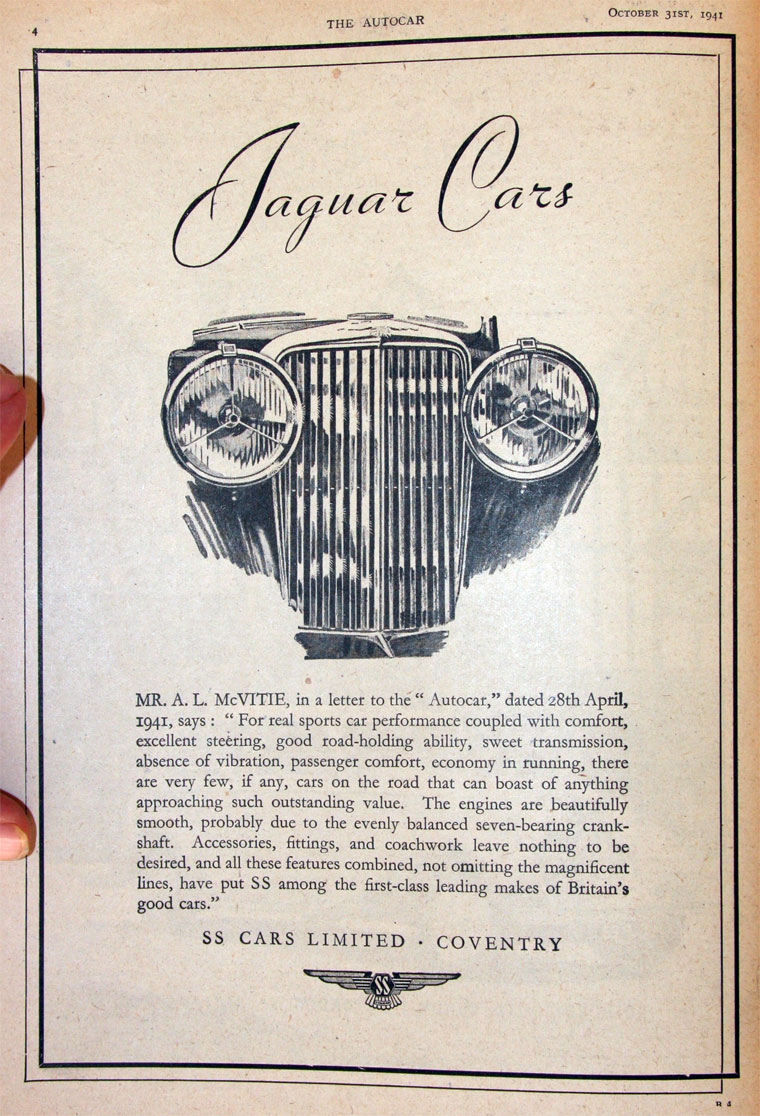 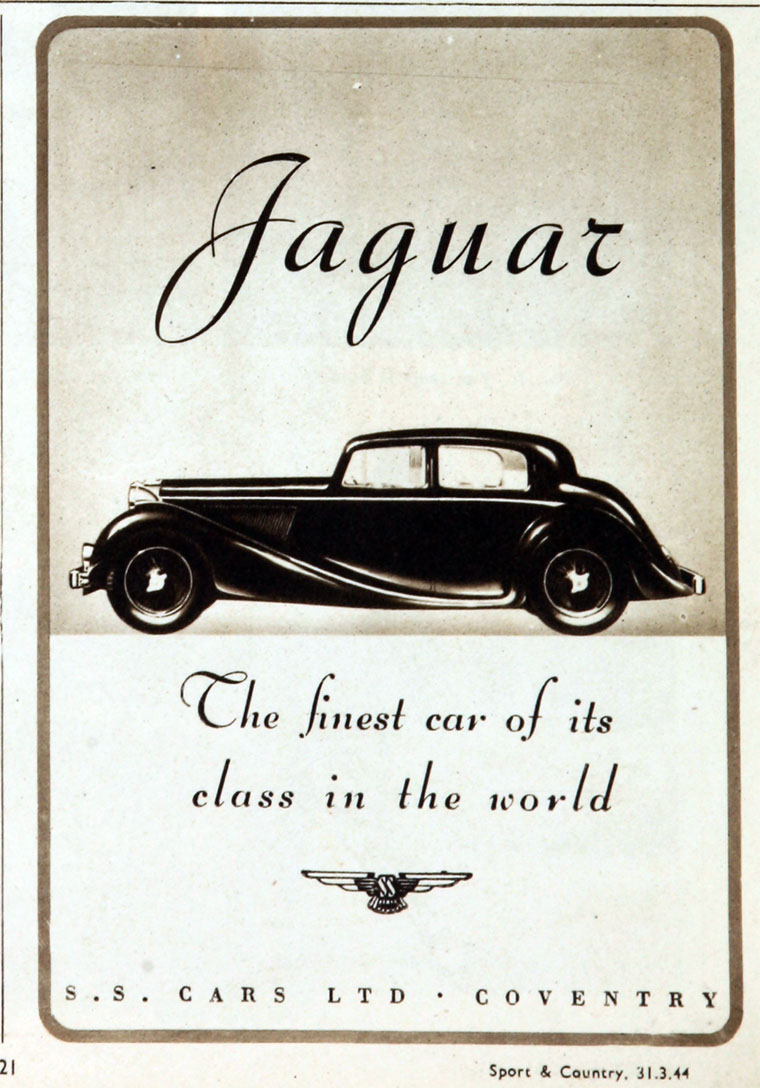 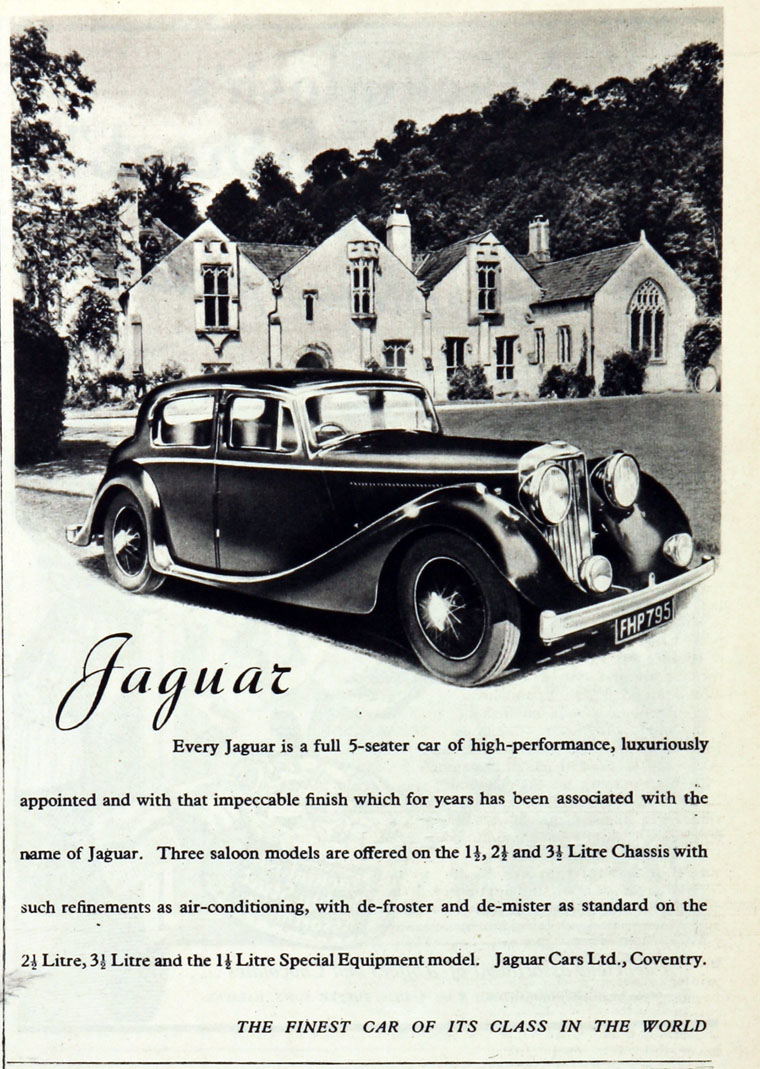 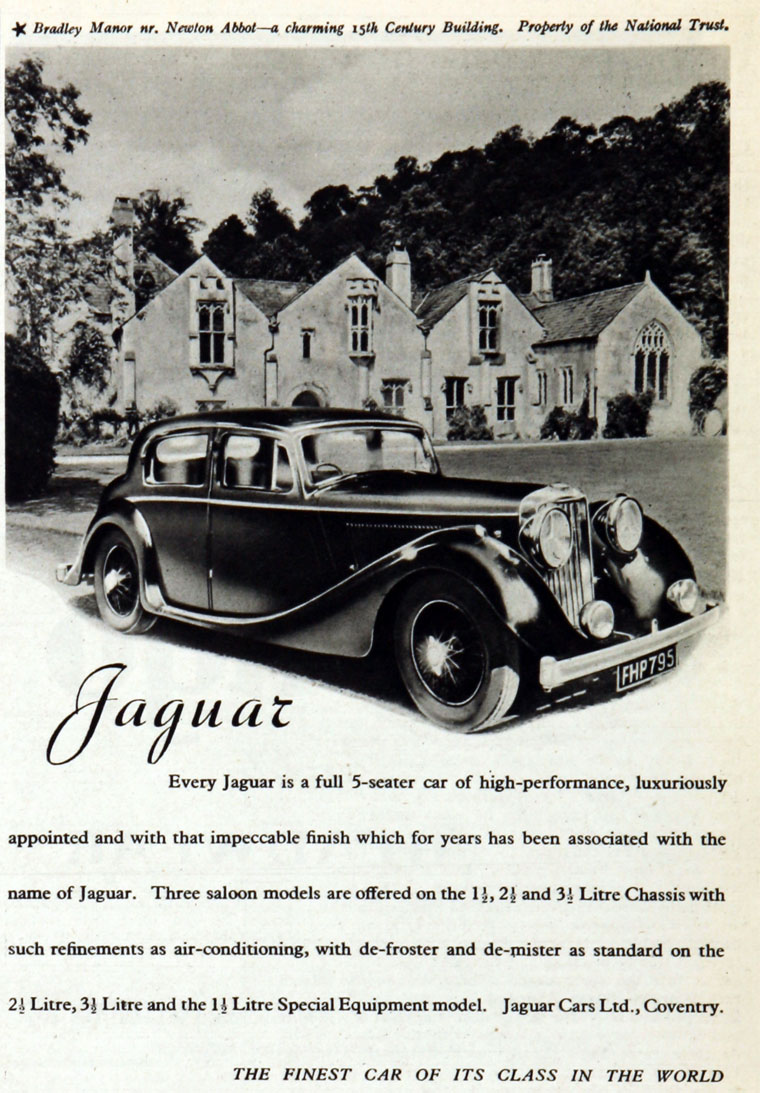 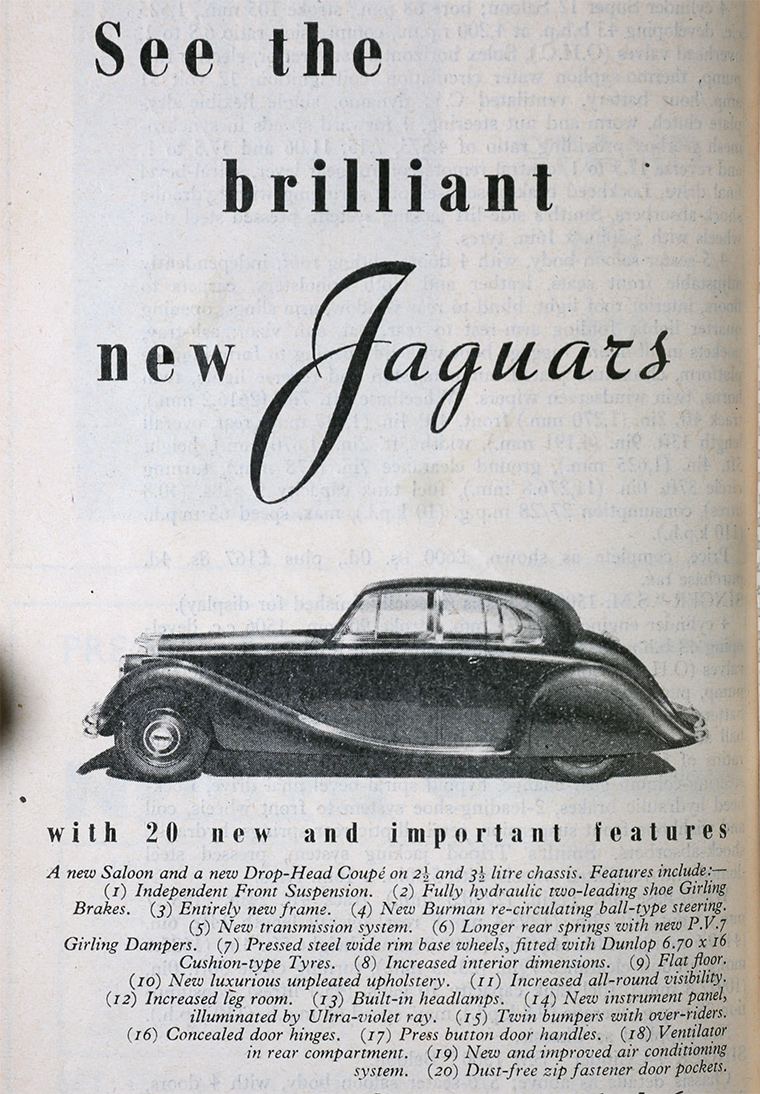 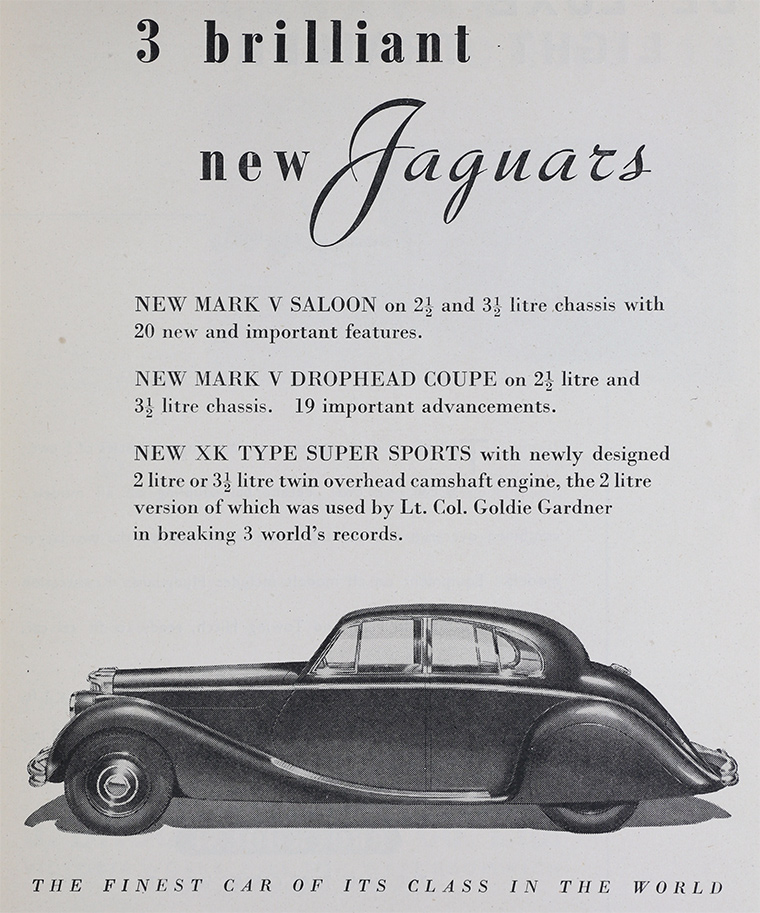 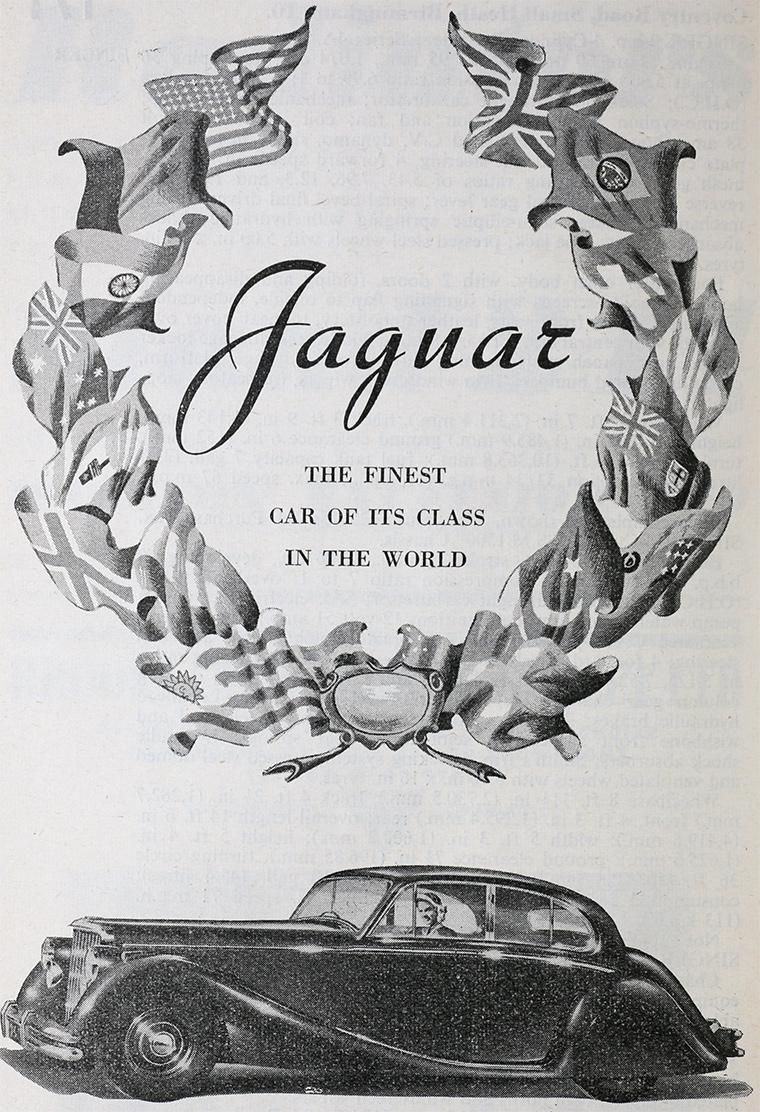 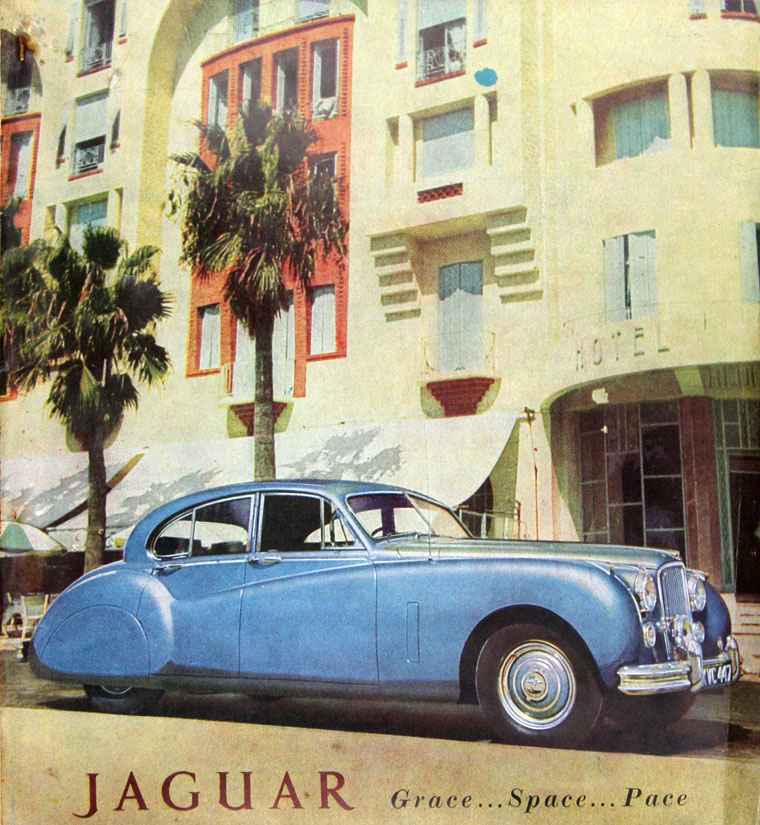 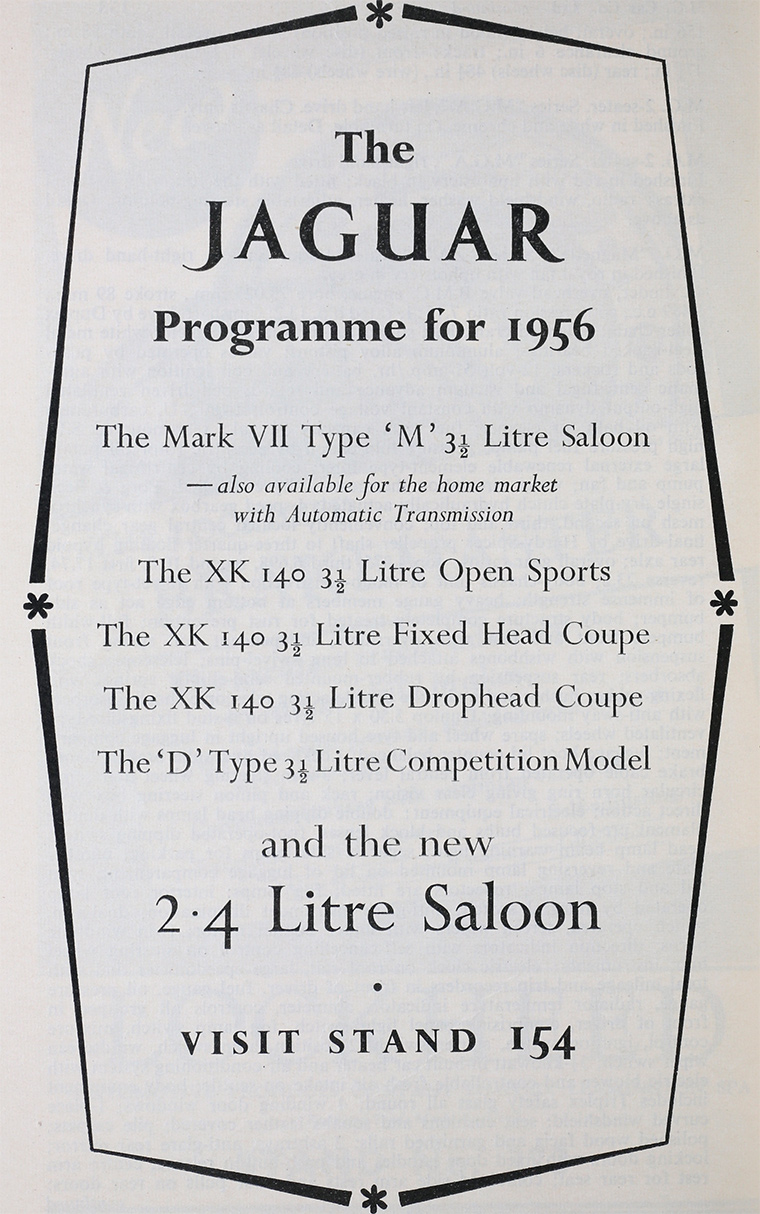 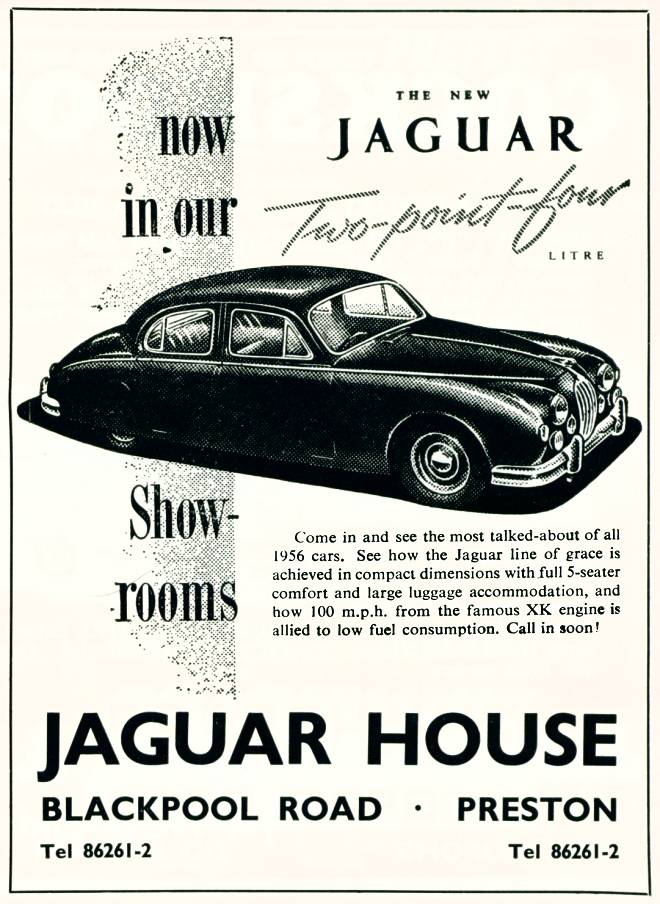 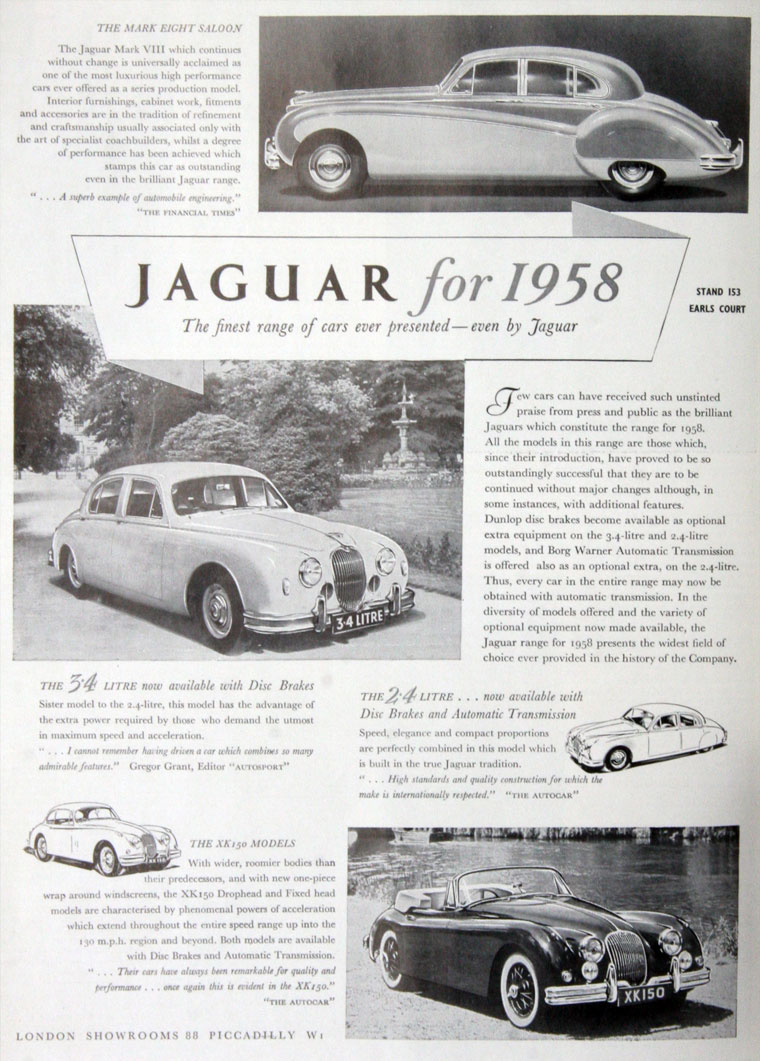 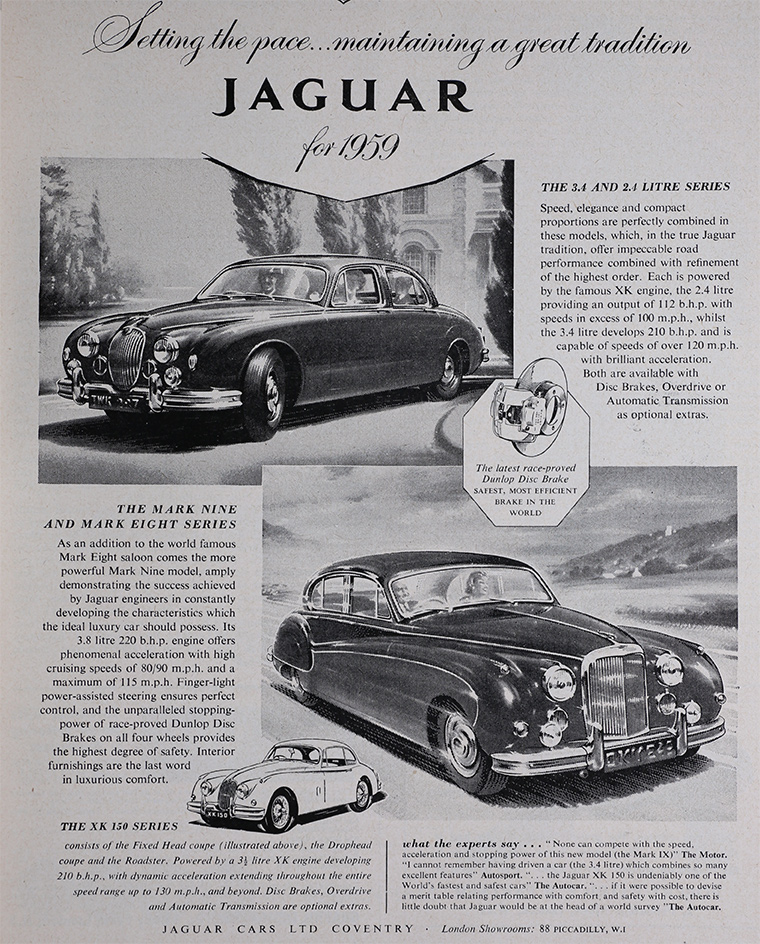 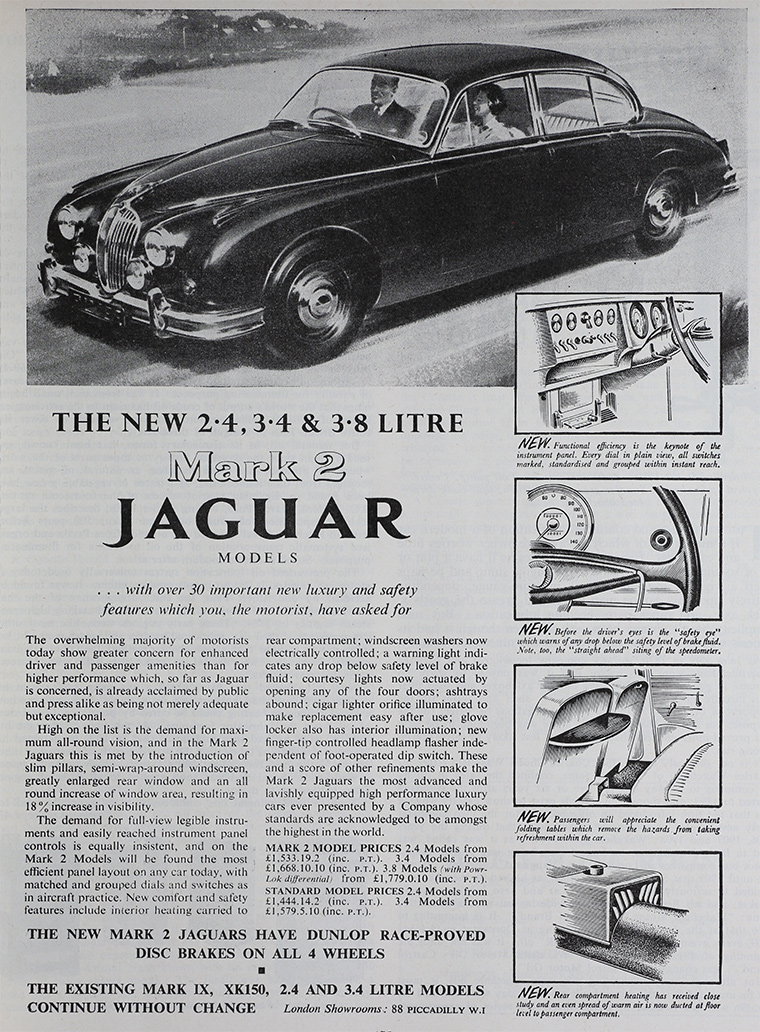 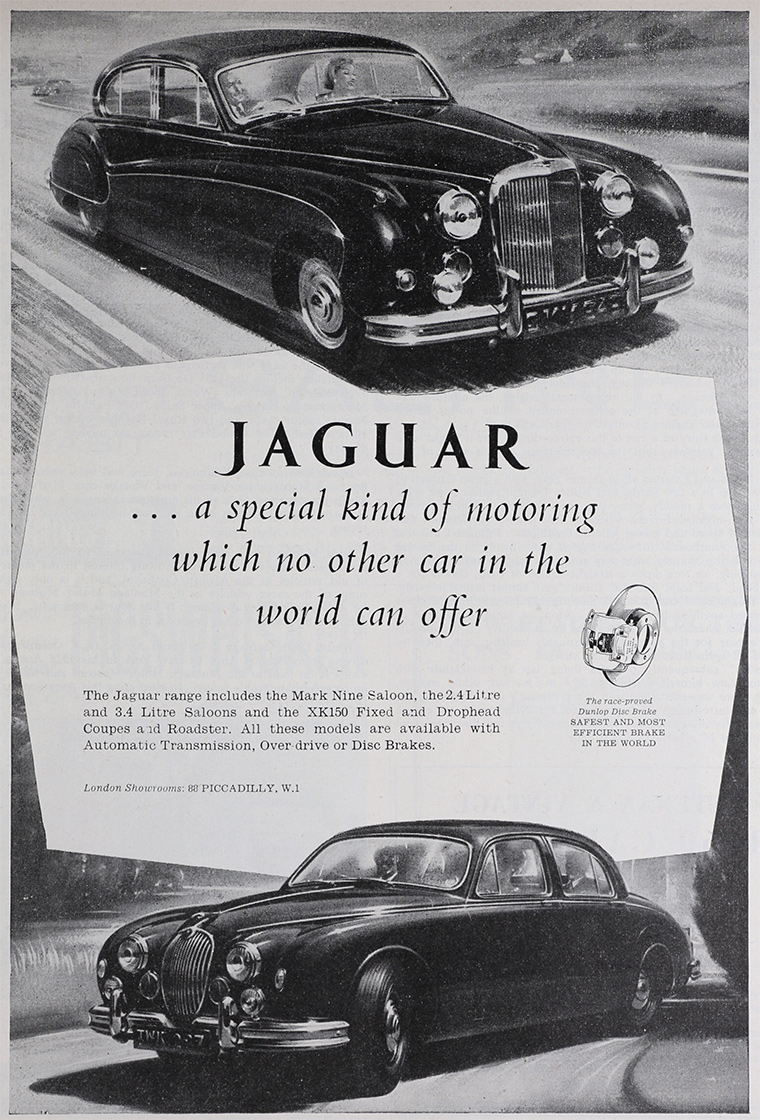 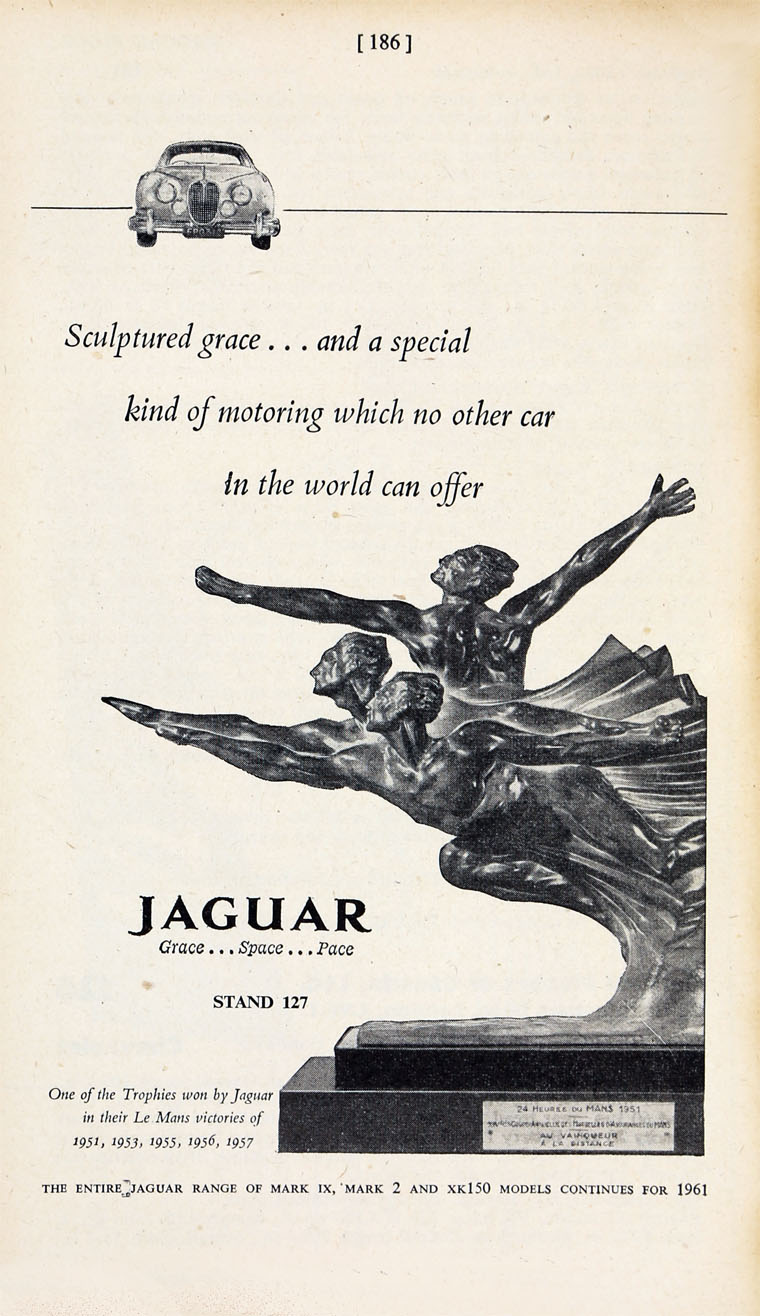 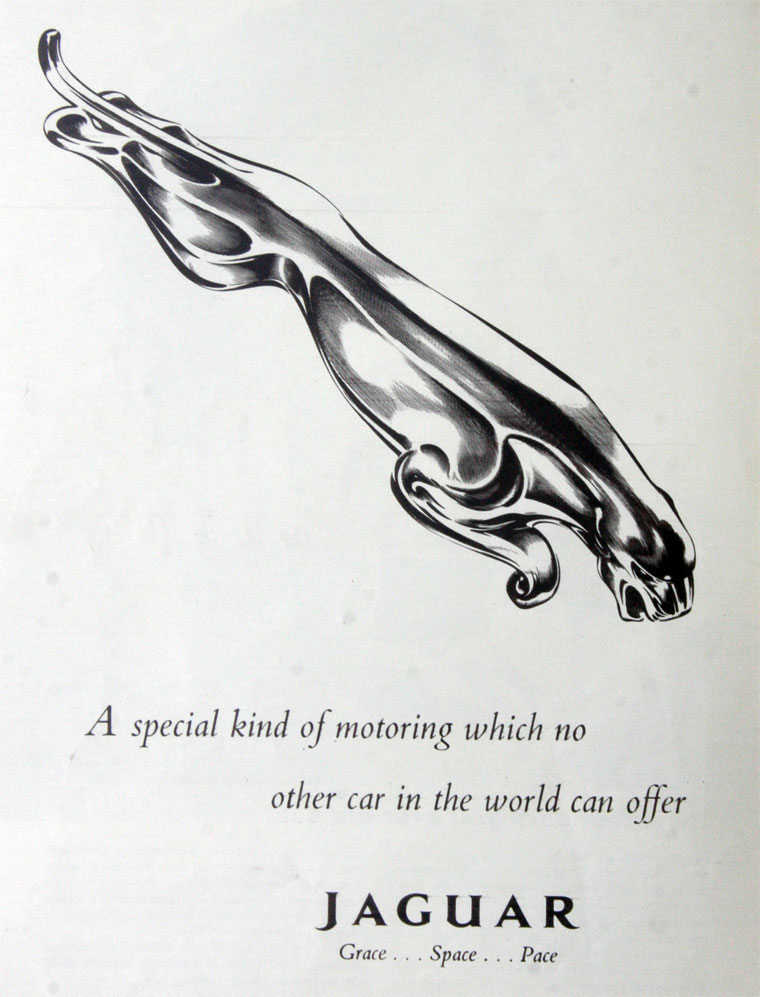 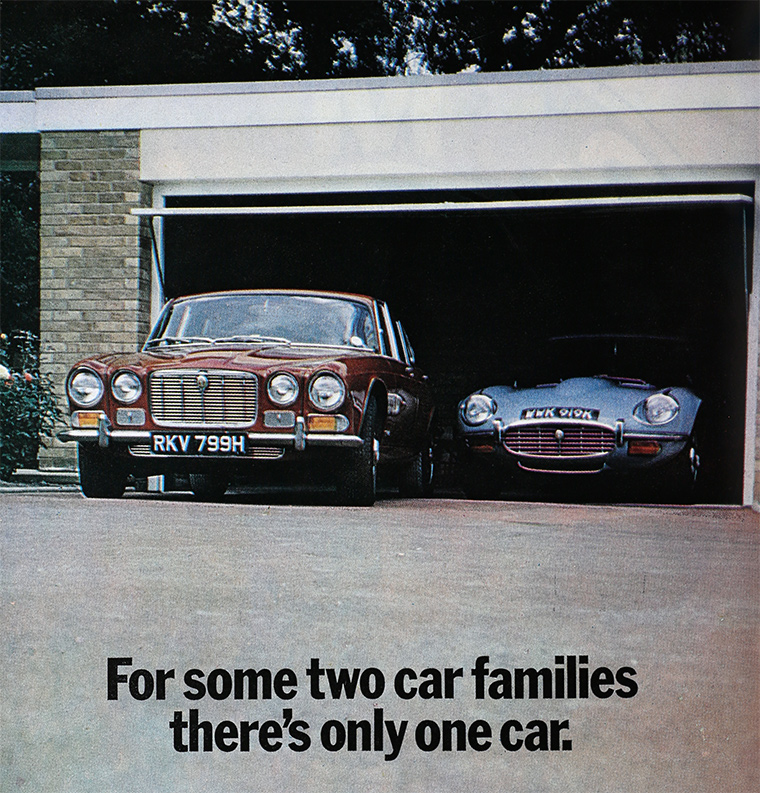 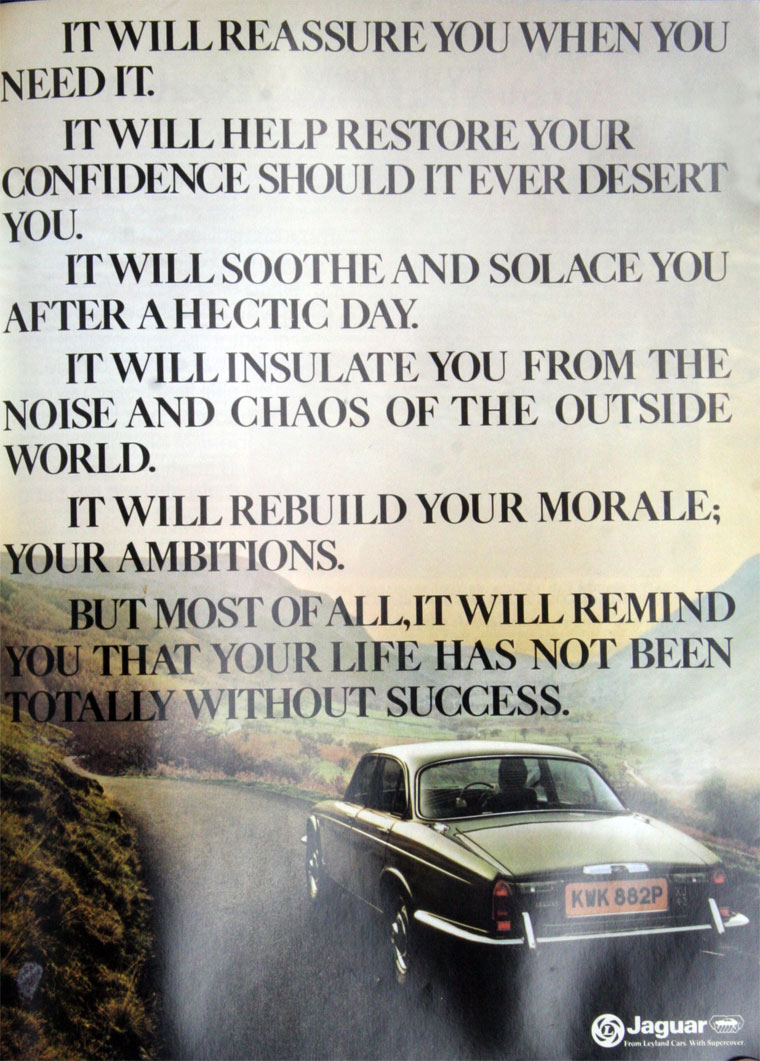 Jaguar Cars of Browns Lane, Coventry is a manufacturer of cars.

1935 The Jaguar engine was introduced[3]. The Jaguar name first appeared on a 2.5 litre saloon.

The Jaguar company started production with the pre-war 1.5, 2.5 and 3.5 litre models which used engines designed by the Standard Motor Co. The 1.5 litre four-cylinder engine was still supplied by Standard but the two larger six-cylinder ones were made in house. These cars have become known unofficially as Mark IVs.

1937 The Jaguar engine had proved to be very reliable. Manufacture of the engine was again put in the hands of the Standard Motor Co who would continue to produce it for the foreseeable future[4]

1945 Changed the company name to Jaguar because of the unfavourable connotations of the initials "SS" in the war.

1945 Sold the Swallow Coachbuilding Co concern to the Helliwell Group

1948 The first post war model was the Mark V available with either 2.5 or 3.5 litre engines and had a more streamlined appearance than pre-war models, but more important was the change to independent front suspension and hydraulic brakes.

1948 The big breakthrough was the launch in 1948 of the XK120 sports car with the new XK twin overhead camshaft (DOHC) 3.5 litre hemi-head six-cylinder engine designed by William M. Heynes as Chief Engineer and with Walter Hassan, Harry Mundy and Claude Baily. This car had originally been intended as a short production model of about 200 vehicles as a test bed for the new engine until its intended home, the new Mark VII saloon, was ready. The XK120's reception was such production continued until 1954 and it was followed by the XK140, XK150, and E-Type, keeping Jaguar in the sports car market.

1951 Introducing the large Mark VII saloon a car especially conceived for the American market, Jaguar soon found itself overwhelmed with orders. The Mark VII and its successors gathered rave reviews from magazines such as Road and Track and The Motor. In 1956 a Mark VII won the prestigious Monte Carlo Rally.

1955 Mark 1 small saloon was the first monocoque (uni-body) car from Jaguar and used a 2.4 litre short stroke version of the XK engine.

1956 The Mark VIII of 1956 and Mark IX of 1958 were essentially updates of the Mark VII but the Mark X of 1961 was a completely new design of large saloon with all round independent suspension and uni-body construction.

1959 The car was improved with a larger engine and wider windows and became the Mark 2, one of the most recognizable Jaguar models ever produced. It would be popular with British police forces for its small size, light weight, and powerful engine.

1960 The company bought the Daimler car company (not to be confused with Daimler-Benz) from Birmingham Small Arms Company (BSA). From the late 1960s, Daimler was used as a brand name for Jaguar's most luxurious saloons.

1974 Jaguar ripped out the assembly track for the E-type in their Coventry factory to make way for the F-type.[8]

Jaguar cars gained something of a reputation for unreliability during the 1970s and 1980s, however this has improved considerably in the last 20 years.

1981 Sales of Jaguar cars in America almost doubled in April compared to the previous year.[9]

1983 Austin Rover Group and Leyland Vehicles, the bus and truck division, were both loss making; the other divisions of BL Cars, Jaguar and Unipart, were profitable[10]

1984 Jaguar was floated off as a separate company on the stock market - one of the Thatcher government's many privatisations. It took the Vanden Plas name with it. It was then taken over by Ford in 1989-1990.

1990 Since the company has been under the Ford Motor Company umbrella, reliability and build has improved dramatically, even surpassing that of Audi and Mercedes-Benz, with the company coming 7th (out of 30) in the J. D. Power Customer Satisfaction Survey (the '242-million mile road test'), and the S-TYPE model coming 9th out of 105 cars in the same survey. However, nowhere has the turnaround in the quality of the cars been more obvious than in the 2003 Top Gear Survey, where the XJ8 (X308) model came first.

1999 Jaguar became part of Ford's new Premier Automotive Group along with Aston Martin, Volvo Cars and, from 2001, Land Rover. Since Land Rover's 2002 purchase by Ford, it has been closely associated with Jaguar. In many countries they share a common sales and distribution network (including shared dealerships), and some models now share components and production facilities. In September 2006 Ford also bought the rights to the Rover name and it is now part of Ford's Premier Automotive Group.

Today, Jaguars are assembled at Castle Bromwich in Birmingham and Halewood in Liverpool. The historic Browns Lane plant closed as a vehicle assembly plant in 2005 leaving the XJ, XK and S-Type production at Castle Bromwich and the X-Type at Halewood. The company also has an engineering division in Whitley, Coventry.

Since Ford purchased Jaguar in 1989 it has yet to earn a profit for the Dearborn-based automaker.