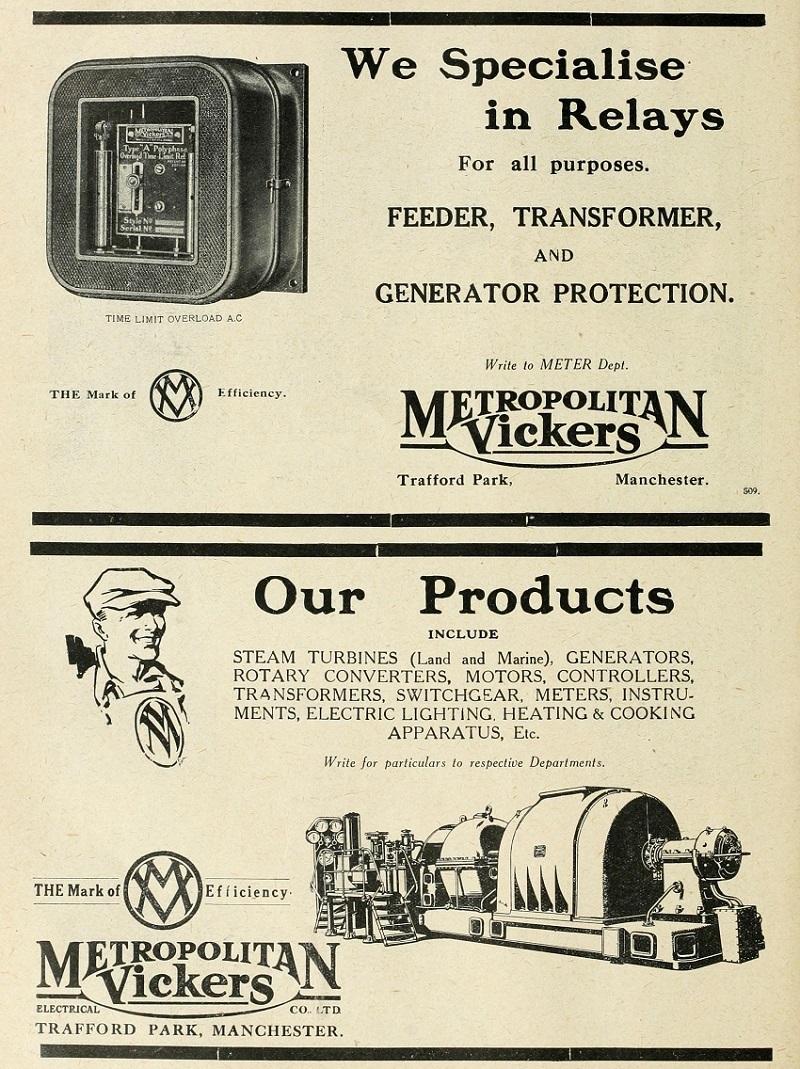 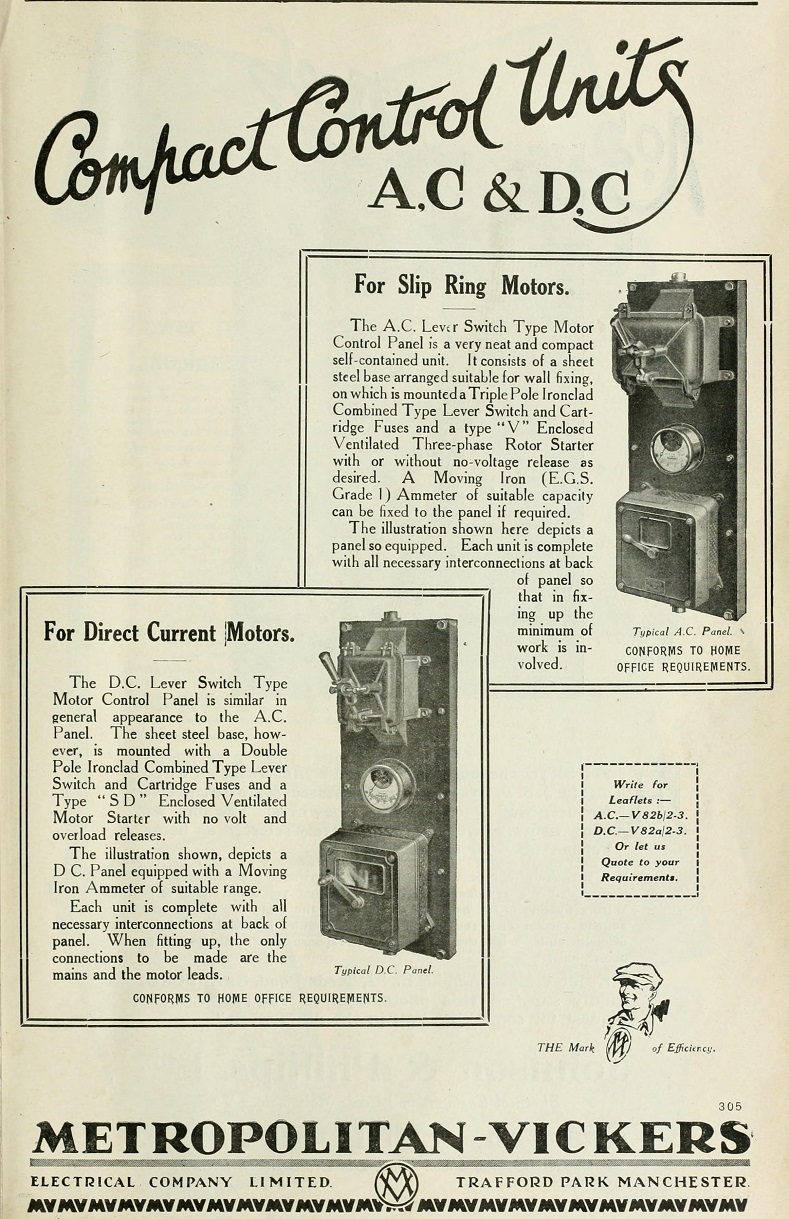 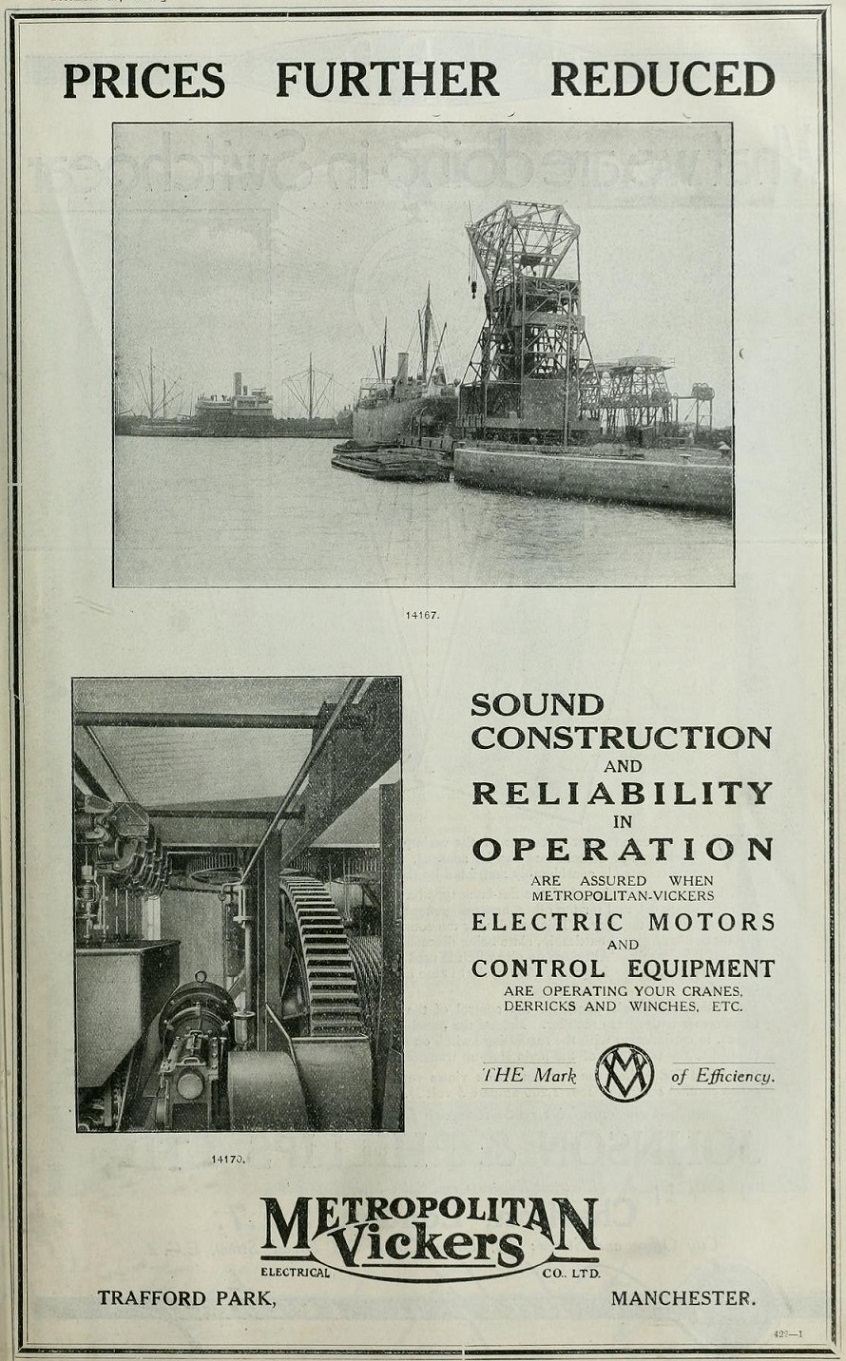 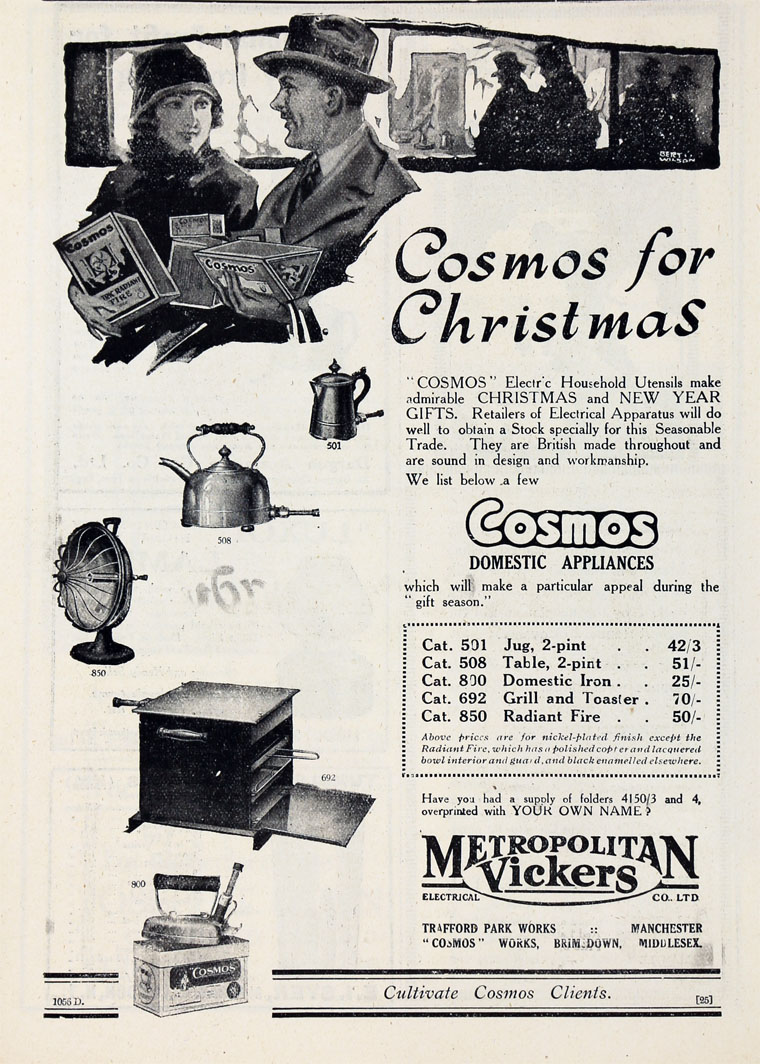 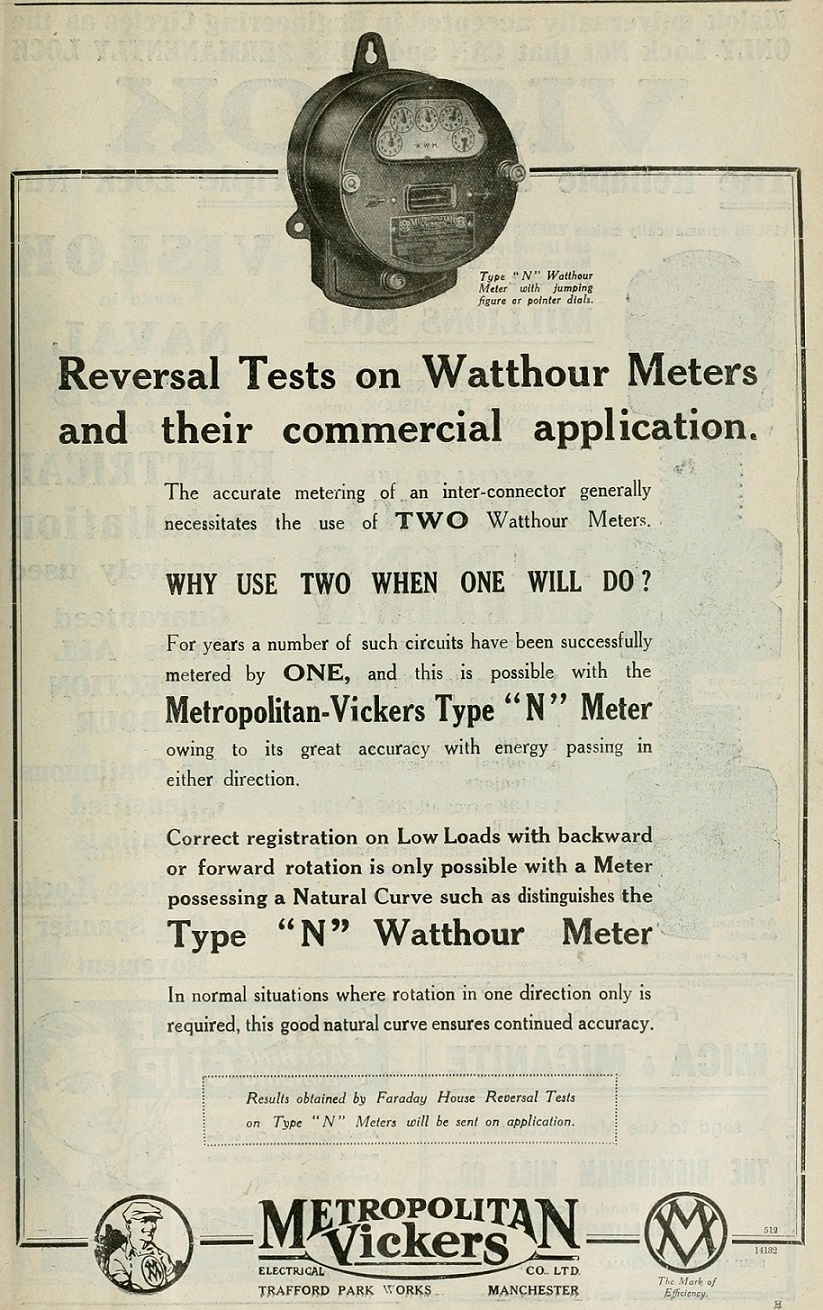 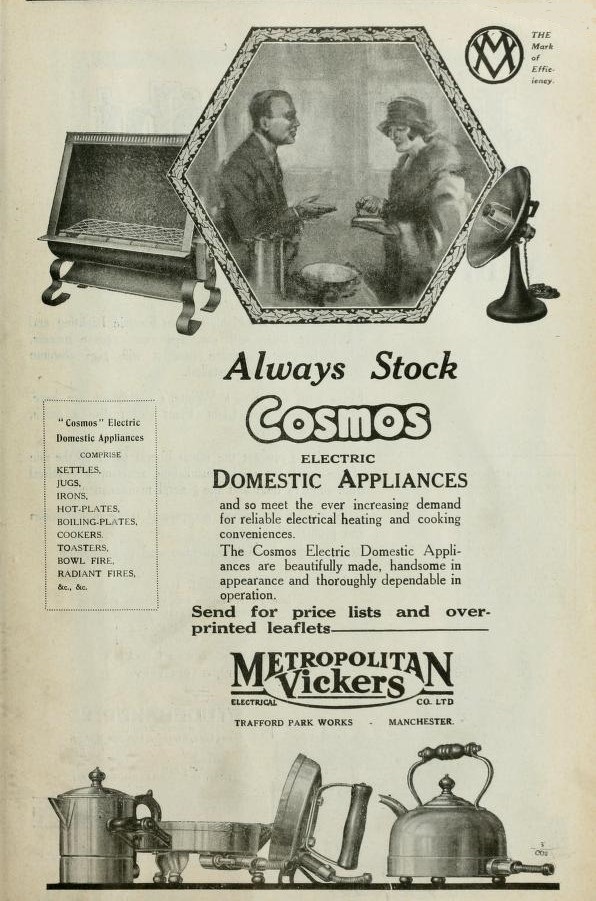 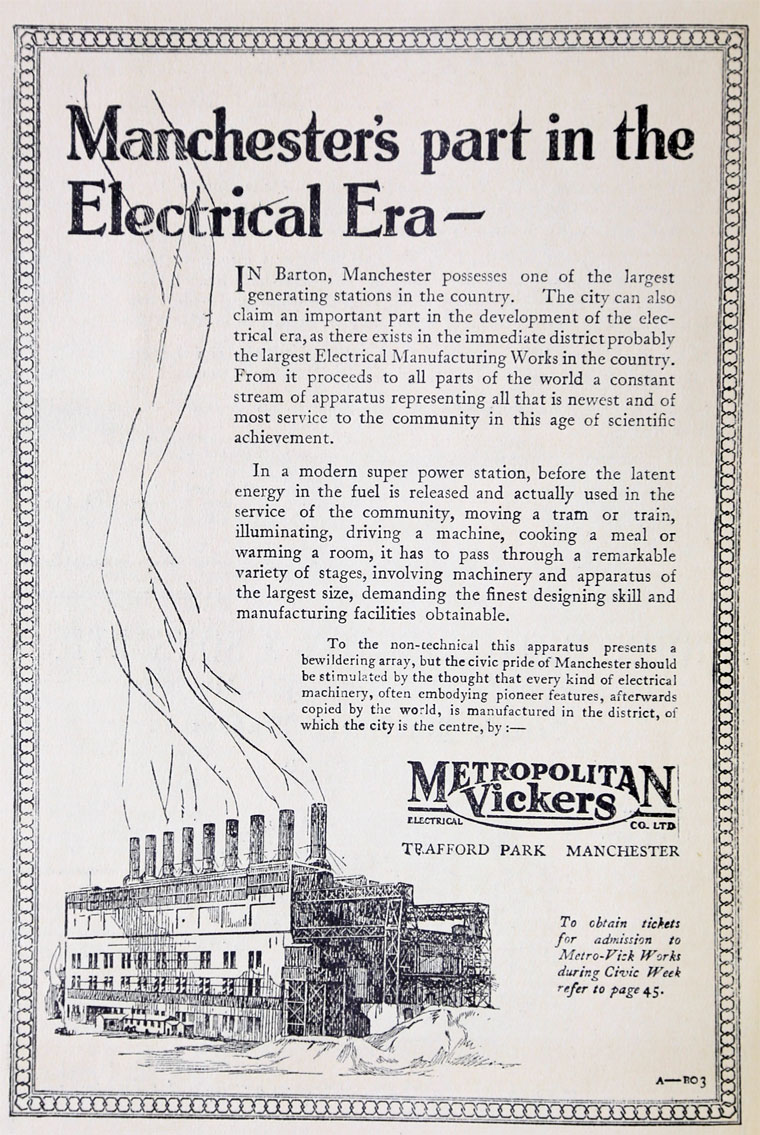 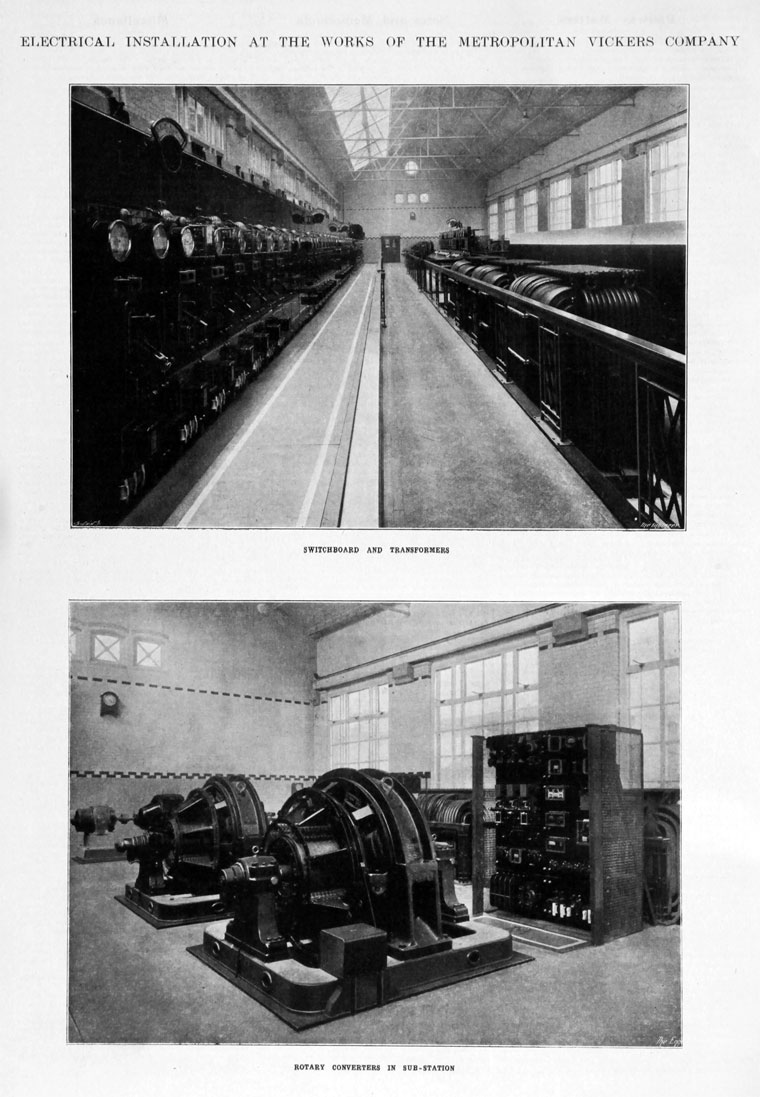 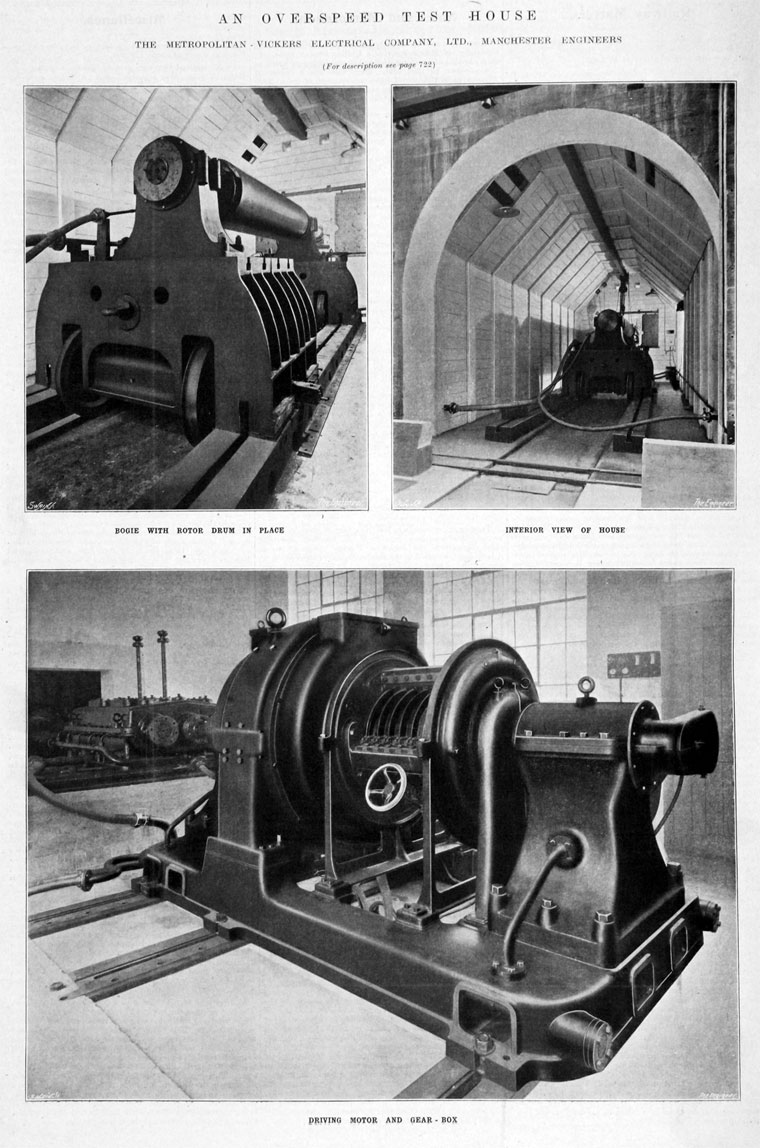 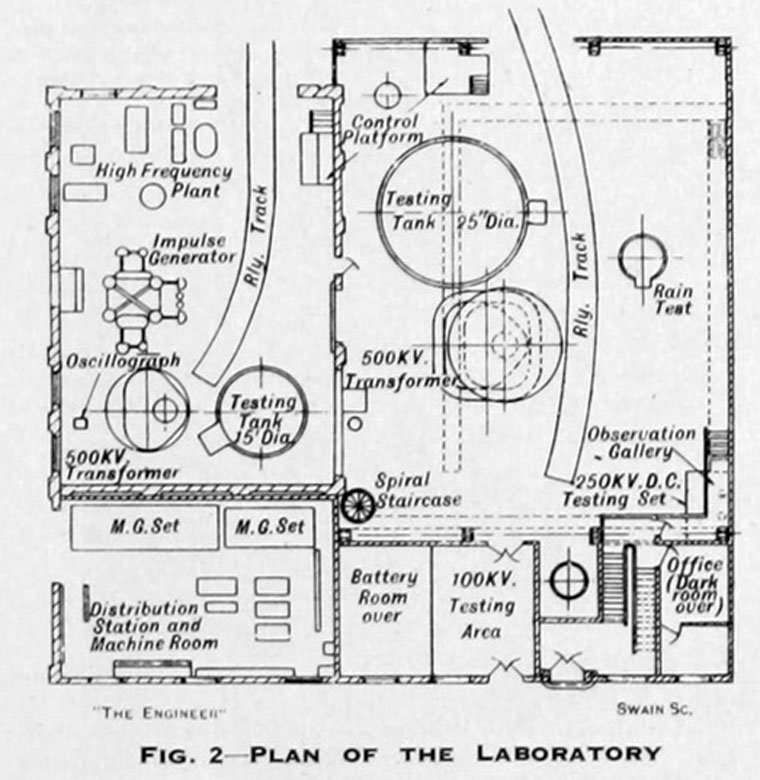 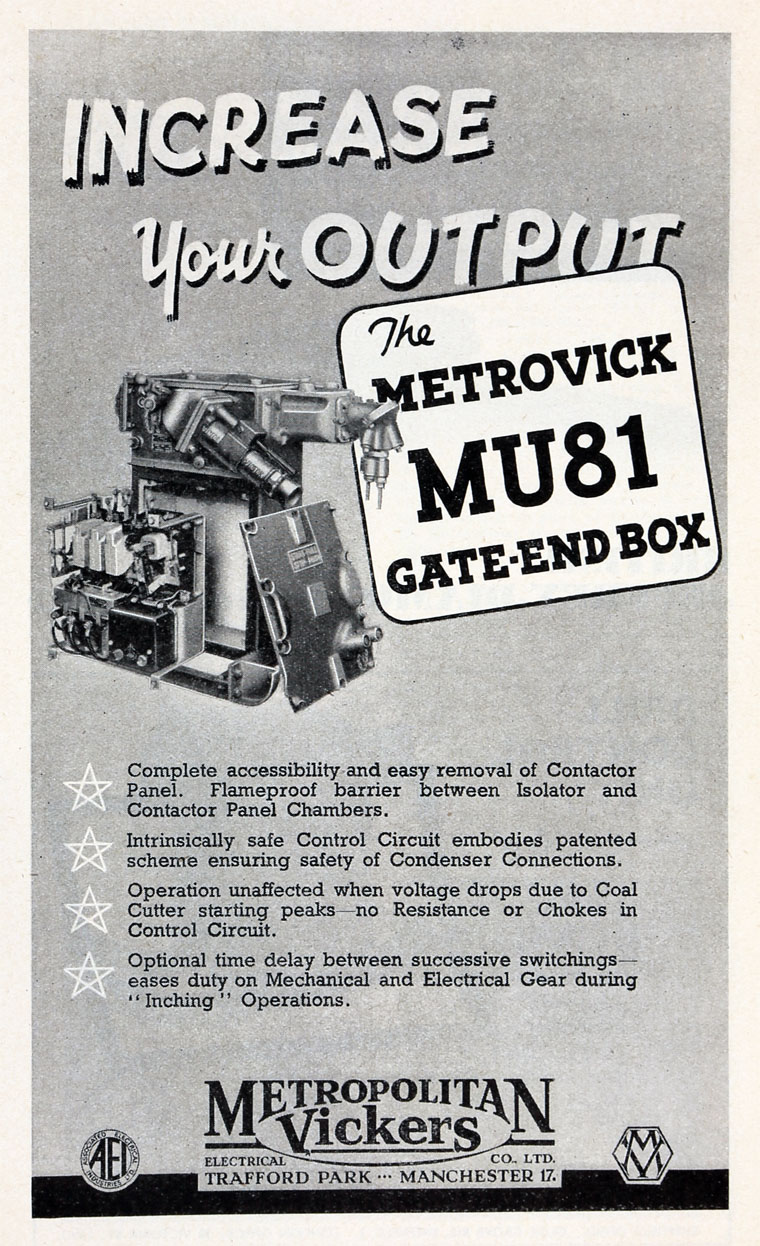 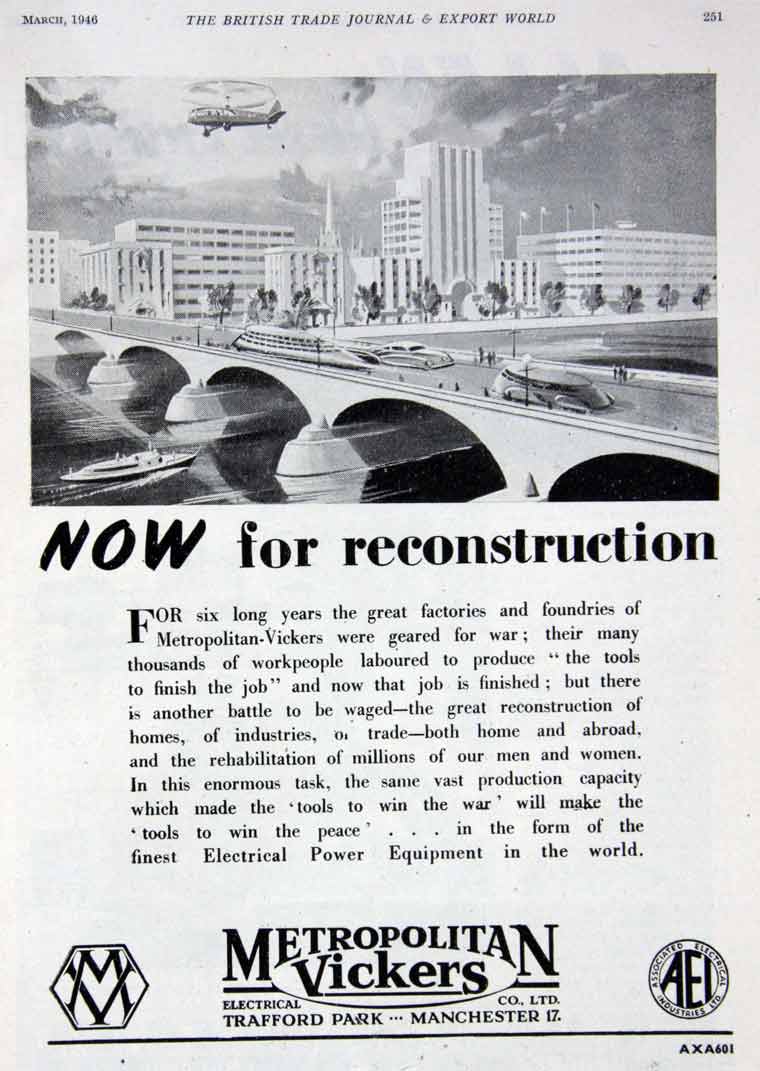 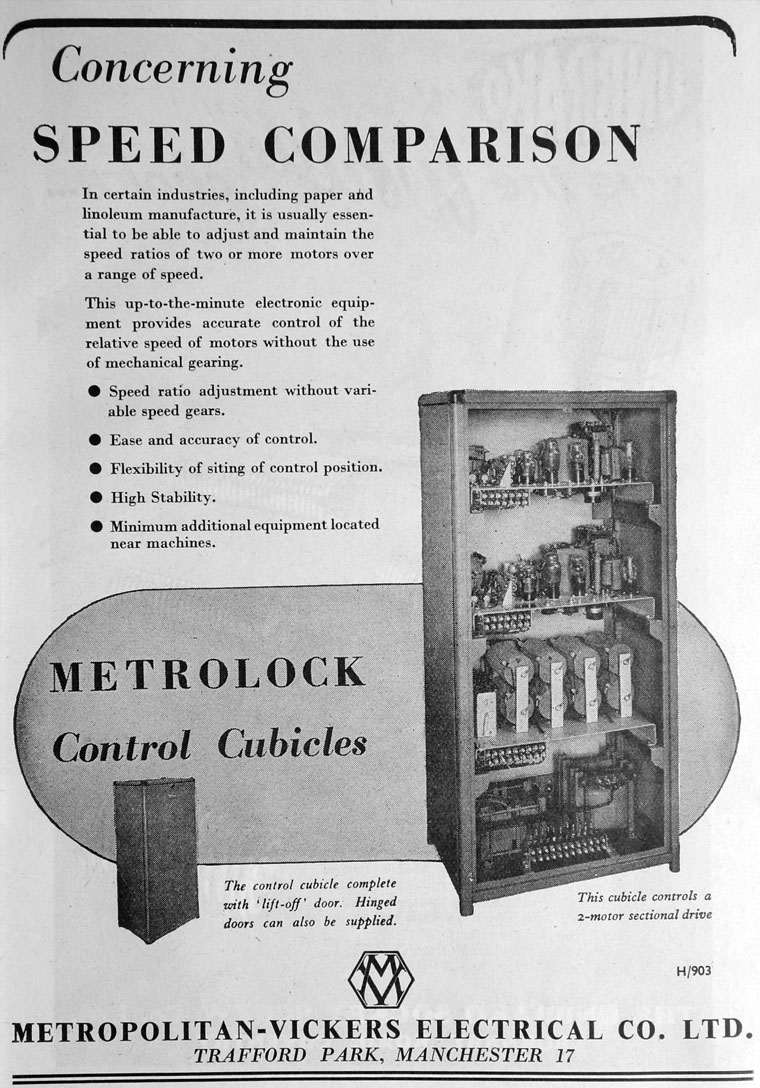 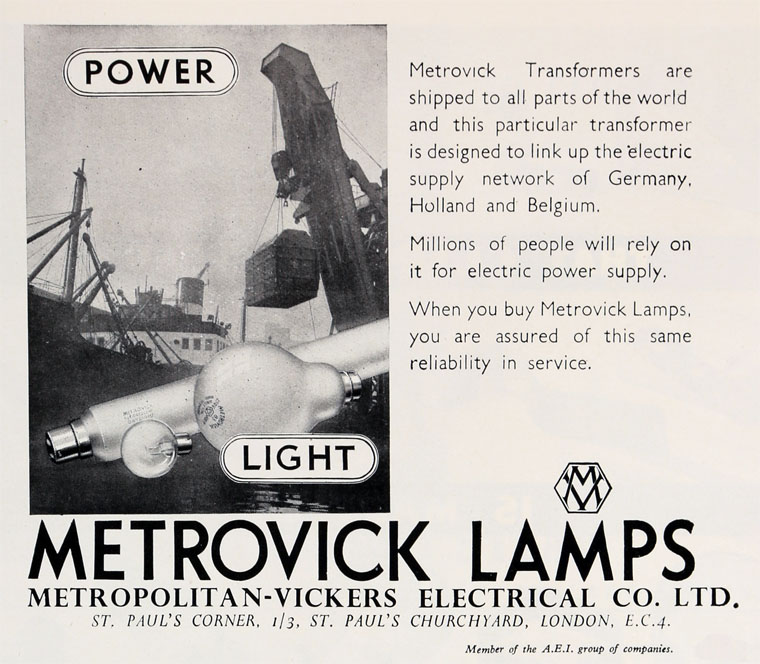 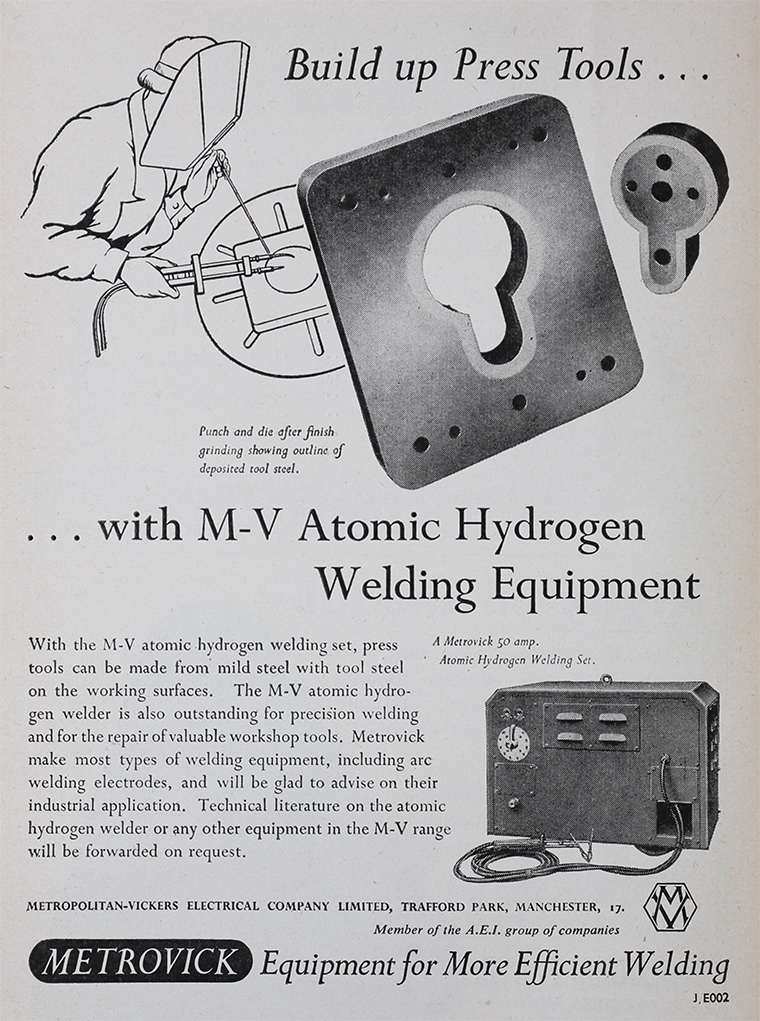 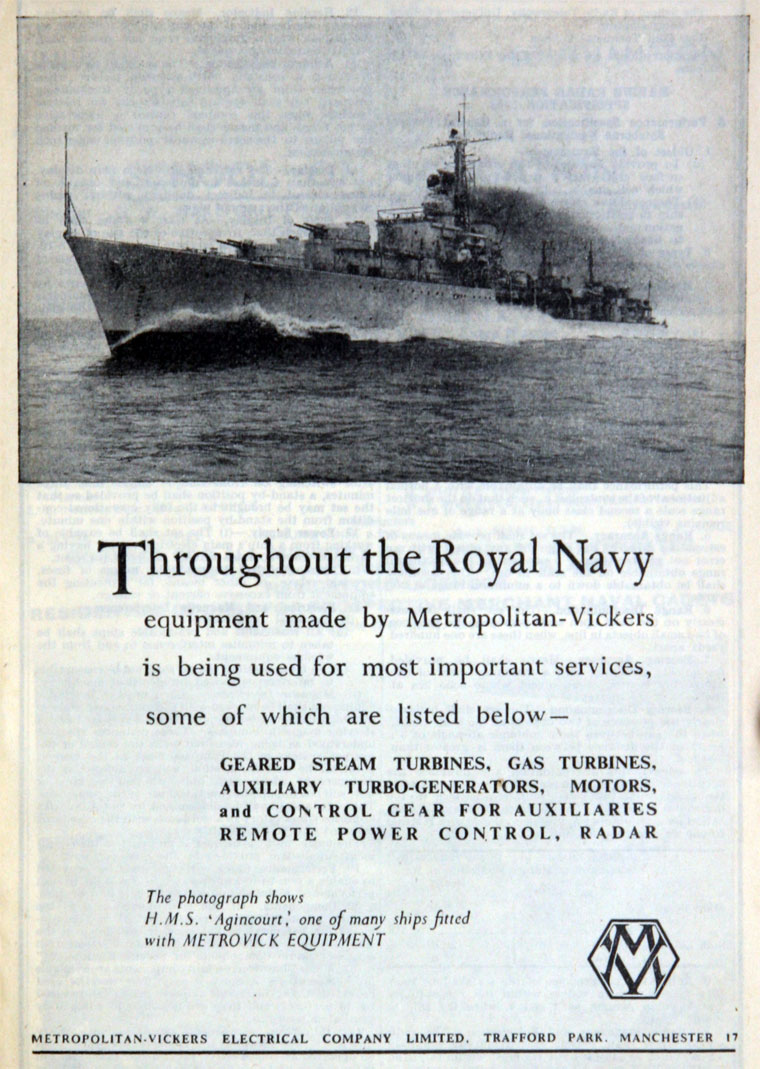 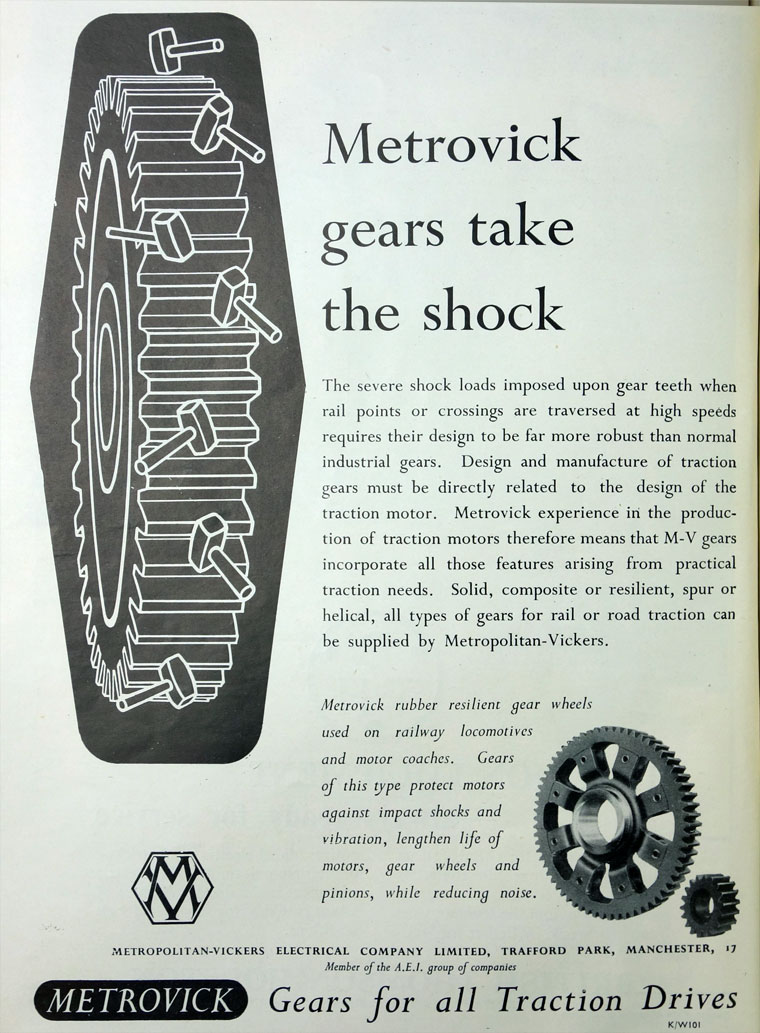 Steam turbine generator set. Exhibit at the Museum of Power.

2018. Mine winder made by Metropolitan-Vickers and M. B. Wild and Co located in Russia.

2018. Metropolitan-Vickers / M. B. Wild mine winder located in Russia.

2018. Metropolitan-Vickers / M. B. Wild mine winder located in Russia.

Highly diversified, Metrovick was particularly well-known for their industrial electrical equipment and generators, street lighting, electronics, steam turbines and diesel locomotives. Metrovick holds a place in history as the builders of the first commercial transistorised computer, the Metrovick 950, and the first British axial-flow jet engine, the Metrovick F.2.

1917 Metrovick came into being as a consequence of a wartime need to separate the existing British Westinghouse factories from US control, which had proven to be a hindrance to gaining government contracts during World War I. In 1917 a holding company was formed to buy the company's properties with funds provided by the Metropolitan Carriage, Wagon and Finance Co and Vickers[1].

1919 The American Westinghouse company wished that the British company did not continue to use the name Westinghouse, so a proposal was developed to change the name to Vickers Electrical Company Ltd, reflecting the recent acquisition by Vickers of Metropolitan Carriage, Wagon and Finance Co who were a large shareholder in British Westinghouse Electrical and Manufacturing[2]. Over 99% of the share capital of Metropolitan Carriage, Wagon and Finance Co was acquired by Vickers[3].

1919 September 8th. The company’s name was changed to the Metropolitan-Vickers Electrical Company[4].

As part of the strategy of manufacturing electric light fittings, Harcourts Limited, a century-old Birmingham firm of brass founders was acquired.

1922 The unveiling of the roll of honour in memory of the members of Metropolitan-Vickers Approved Society who fell in the war took place on Wednesday, the 2nd, in the workmen's canteen of the company's Trafford Park Works. In the course of his remarks, the chairman Mr. R. W. Rowe, mentioned that during the period of the war, out of a total male membership of 2301 covering that whole period, 924 men joined the colours. Out of this large number, 74 men failed to return, and he added, it was to their memory that this tribute of regard was to be paid. On behalf of the members of the society, and in memory of the dead whose names appeared on the role of honour, he therefore requested Captain R. S. Hilton, managing director of the company and president of the society, to unveil the memorial. [6]

1922 One of the six telecommunications companies that founded the British Broadcasting Company.

1923 'The works occupy about 130 acres, and the effective floor space in the shops amounts to about 1,500,000 square feet. Normally about 9,000 work people are employed.' Detailed report from the visit of the Institution of Electrical Engineers.[7]

1924 Metro-Vick Supplies Limited was registered with a large showroom in Holborn to bring together the developing business in small electrical equipment.

1926 The immediate post-war era was marked by low investment and continued labour unrest. Fortunes changed in 1926 with the formation of the Central Electricity Board which standardized electrical supply and led to a massive expansion of electrical distribution, installations, and appliance purchases. Sales shot up, and 1927 marked the company's best year to date.

1926 A new company, Metropolitan-Vickers-GRS Limited, was formed jointly with the General Railway Signal Company of Rochester, New York, to sell railway signalling equipment, under the design of the American company and made at the Trafford Park works.

Acquired from Vickers the electric heating and cooking appliances subsidiary, Electric and Ordnance Accessories Co of Birmingham. This was part of the strategy to make goods rather than factoring them; there was room at the Cosmos works to make domestic appliances. A range of radiant fires was evolved that were the first of their type and, in fact, the ancestors of today's models.

1927 One of the UK's major electrical-machinery and plant manufacturers, others beings GEC, BTH, English Electric Co, and C. A. Parsons and Co[10].

1927 April. Mr P. N. Rand the general sales manager of the Metropolitan-Vickers Company severed all connections with the company.[11]

1928 the International General Electric Company purchased the controlling interest in the company from Vickers[12]. Vickers had been disappointed that their expectations of an amalgamation of electrical manufacturing interests had not taken place so, when an offer to purchase for cash was received, Vickers were glad to accept although they did retain a significant holding of Ordinary shares[13]. Mr F. Dudley Docker then acquired control of the company[14], with his son Bernard being appointed to the board. However, soon after Bernard Docker and some other directors were removed from the Board[15].

1928 the domestic appliance work was mainly transferred to Harcourts, where considerable extensions had been made, and the Cosmos works concentrated on the manufacture of lamps and valves; the lamp output for that year was a record, and the demand for receiving valves—in six types—was growing steadily.

1928 Metrovick merged with the rival British Thomson-Houston (BTH), a company of similar size and basically the same product line-up to form Associated Electrical Industries (AEI)[16]. Combined, they would be one of the few groupings able to compete with Marconi's Wireless Telegraph Co or the English Electric Co on an equal footing. Also included in the new group were Edison Swan Electric Co (Ediswan) and Ferguson Pailin of Openshaw, Manchester. Agreement had been reached with International General Electric Co (USA) to acquire that company's shareholding in BTH[17]. Several of the directors of Metropolitan-Vickers resigned to become directors of the subsidiary Metropolitan-Vickers Electrical Co Ltd.

The new group was handicapped by poor communication and intense rivalry between Metrovick and BTH, which continued as separate entities, typically working at cross-purposes to each other. AEI was never able to exert effective control over its two subsidiaries.

1929 Problems worsened in 1929 with the start of the great depression, but Metrovick's overseas sales were able to pick up some of the slack, notably a major railway electrification project in Brazil.

1933 World trade was growing again, but growth was nearly upset when six Metrovick engineers were arrested and found guilty of espionage in Russia. This was regarding the Russian Moscow Metro development. Soviet workers did the labour and the art work, but the main engineering designs, routes, and construction plans were handled by specialists recruited from the London Underground. The Britons called for tunnelling instead of the "cut-and-cover" technique, the use of escalators instead of lifts, the routes, and the design of the rolling stock. The paranoia of the NKVD was evident when the secret police arrested numerous British engineers for espionage because they gained an in-depth knowledge of the city's physical layout. Engineers for the Metropolitan-Vickers Electrical Company (Metrovick) were given a show trial. [18]The British government intervened; the engineers were released and trade with Russia was resumed after a brief embargo.

1936 Metrovick started work with the Air Ministry on automatic pilot systems, eventually branching out to gun-laying systems and building radars the next year. In 1938 they reached an agreement with the Ministry to build a turboprop design developed at the RAE under the direction of Hayne Constant. It is somewhat ironic that BTH, their erstwhile partners, were at the same time working with Frank Whittle on his pioneering jet designs.

1937 Started to manufacture radar in June 1937, and gun mountings a few months later.

In mid-1938, MV was given a contract to build Avro: Manchester twin-engined bombers under licence from Avro. As this type of work was very different from their traditional heavy engineering activities, a new factory was built on the western side of Mosley Road and this was completed in stages through 1940. The first 13 Manchesters were destroyed in a Luftwaffe bombing raid on Trafford Park on 23 December, but the firm went on to complete 43 examples. With the design of the much improved four-engined derivative, the Lancaster, M-V switched production to that type. Three hangars were erected on the south side of Manchester's Ringway Airport for assembly and testing of their Lancasters, before a policy switch was made to assemble them in a hangar at Avro's Woodford airfield. By the end of the war, M-V had built 1,080 Lancasters. These were followed by 79 Lincoln derivatives before remaining orders were cancelled and M-V's aircraft production ceased in December 1945.

In 1940 the effort on a turboprop engine design was re-focussed as a pure jet engine design after the successful run of Whittle's engine. The new design became the Metrovick F.2 and eventually flew in 1943 on a Gloster Meteor. Considered to be too complex to bother with, Metrovick then re-engineered the design once again to produce roughly double the power, while at the same time starting work on a much larger design, the Metrovick F.9 Sapphire. Although the F.9 proved to be a winner, the Ministry of Supply nevertheless forced the company to sell the jet division to Armstrong Siddeley Motors in 1947 to reduce the number of companies in the business.

The post-war era led to massive demand for electrical systems, leading to additional rivalries between Metrovick and BTH as each attempted to one-up the other in delivering ever-larger generator contracts. Metrovick also expanded their appliance division during this time, becoming a well known supplier of refrigerators and stoves.

1957 AEI started to introduce product-based businesses: Ferguson Pailin and Sunvic were associated with the M-V business[24]

1958 Another major area of expansion was in the diesel locomotive market, where they combined their own generators with third-party diesel engines to develop in 1958 the type 2 Co-Bo, later re-classified under the TOPS system as the British Rail Class 28. This diesel-electric locomotive was unusual on two counts; its Co-Bo wheel arrangement and its Crossley 2-Stroke diesel engine. Intended as part the British Railways Modernisation Plan, the twenty strong fleet saw service between Scotland and England before being deemed unsuccessful and withdrawn towards the end of the 1960s.

1960 The rivalry between Metrovick and BTH was eventually ended in an unconvincing fashion when the AEI management eventually decided to rid themselves of both brands and be known as AEI universally, a change they made on January 1, 1960. This move was almost universally resented within both companies. Worse, the new brand name was utterly unknown to their customers, leading to a noticeable fall-off in sales and AEI's stock price.

AEI then went on to attempt to remove the doubled-up management structures but they found this task to be even more difficult.

By the mid-1960s the company was struggling under the weight of two complete management hierarchies, and they appeared to be unable to control the company any more. This allowed GEC to purchase AEI in 1967, which became Marconi plc in 1999 (now Marconi Corporation plc).