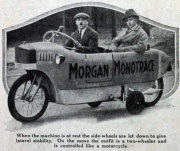 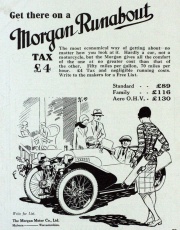 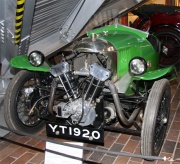 1928. Exhibit at the National Motor Museum. 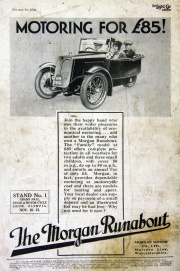 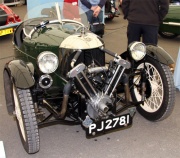 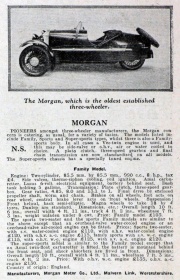 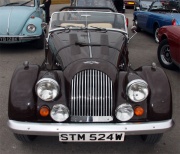 1910 The company was founded by H. F. S. Morgan assisted by William John Stephenson Peach and was run by Peter Morgan , son of H.F.S., until his death in 2003. The early cars were two seat three-wheelers, and thus count as cyclecars. They were designed to avoid a British tax on cars by being classed as motorcycles. Competition from the likes of the Austin 7, with comparable economy and price and better comfort, made cyclecars less attractive. Morgan's first four-wheeler was the 4/4, for four-cylinder engine and four wheels.

In spite of their traditional design, Morgans have modern sports car performance, due to their very low weight. The Morgan Plus 8, which for many years used the 3.5L (215ci) aluminium V8 licenced from GM (shared with Rover), though later versions of the engine were provided in 3.9L, 4.0L and 4.6L capacities. This was powered by a fuel-injected 196 hp Rover V8 in its final iteration and could accelerate from 0-60 mph in 5.6 seconds. Enthusiasts work on the engine, exhaust and electronic chip management to improve this figure.

1961 Manufacturers of the "Morgan" three and four wheeler sports cars. [2]

In 2000, the Morgan Aero 8 was introduced and, as always, the wooden body substructure was ash. (Contrary to popular myth, however, the chassis is metal; aluminium for the Aero 8). The Aero 8, with a BMW V8 engine in a car half the weight of the BMW, is even faster than the Plus 8, delivering what Autoweek magazine termed super car performance.

In 2004, the Morgan Roadster was launched to replace the Plus 8 which had to be withdrawn once the supply of suitable V8 engines was exhausted.

The factory is located in Malvern Link (an area of Malvern in Worcestershire) and has 155 employees. All the cars are assembled by hand. The waiting list can be up to a year. Production is nine cars a week and each car takes three months to build.