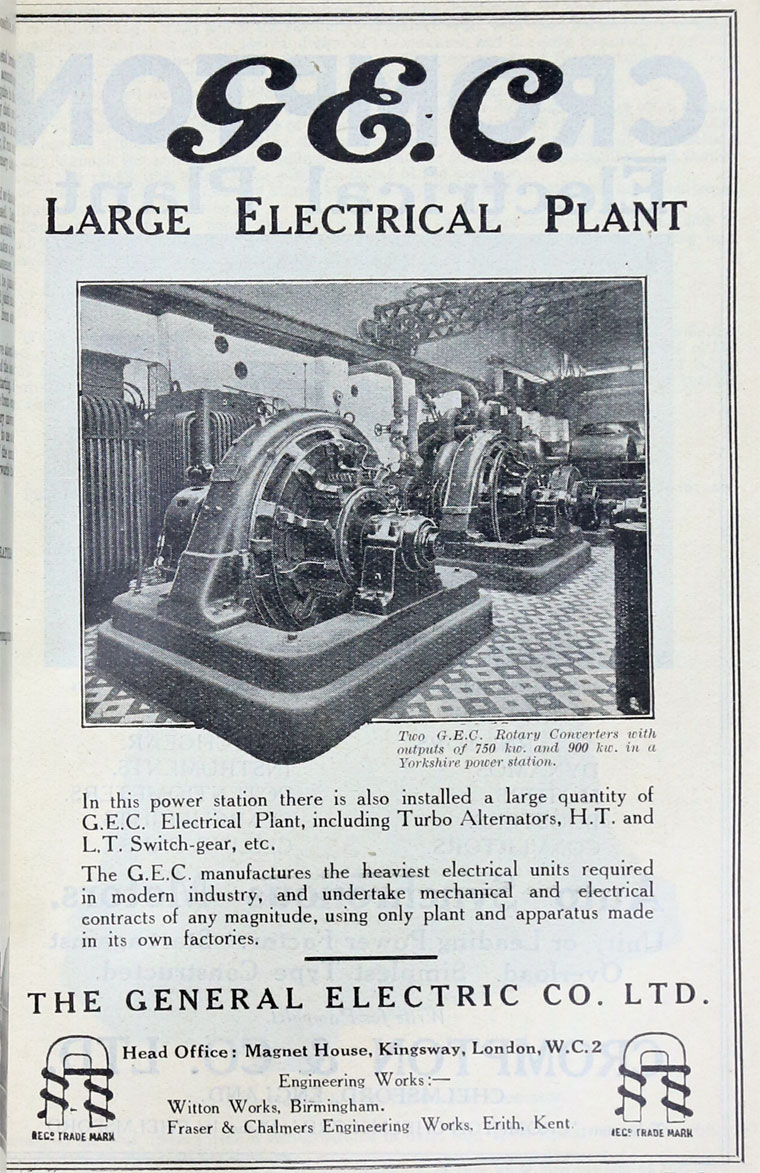 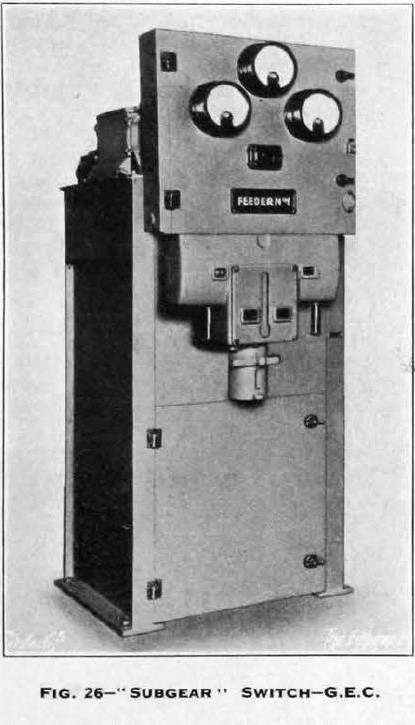 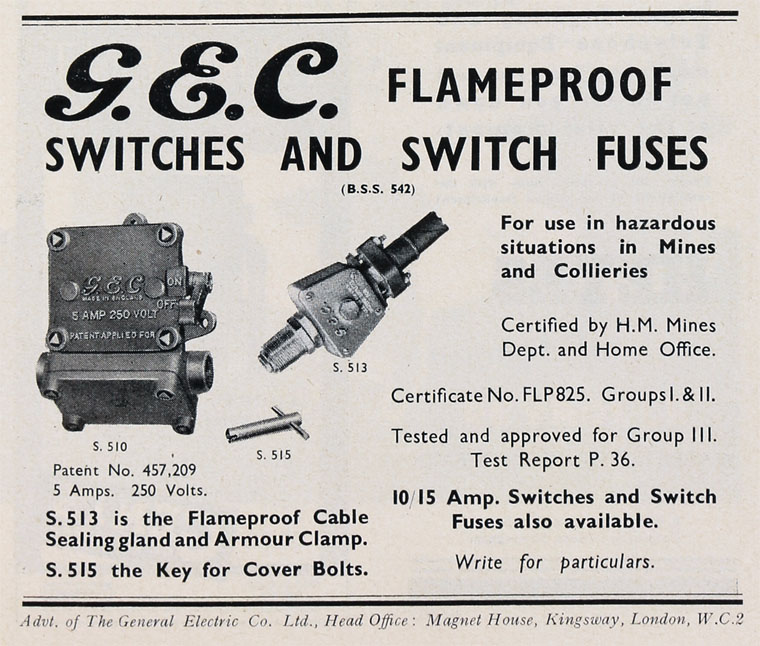 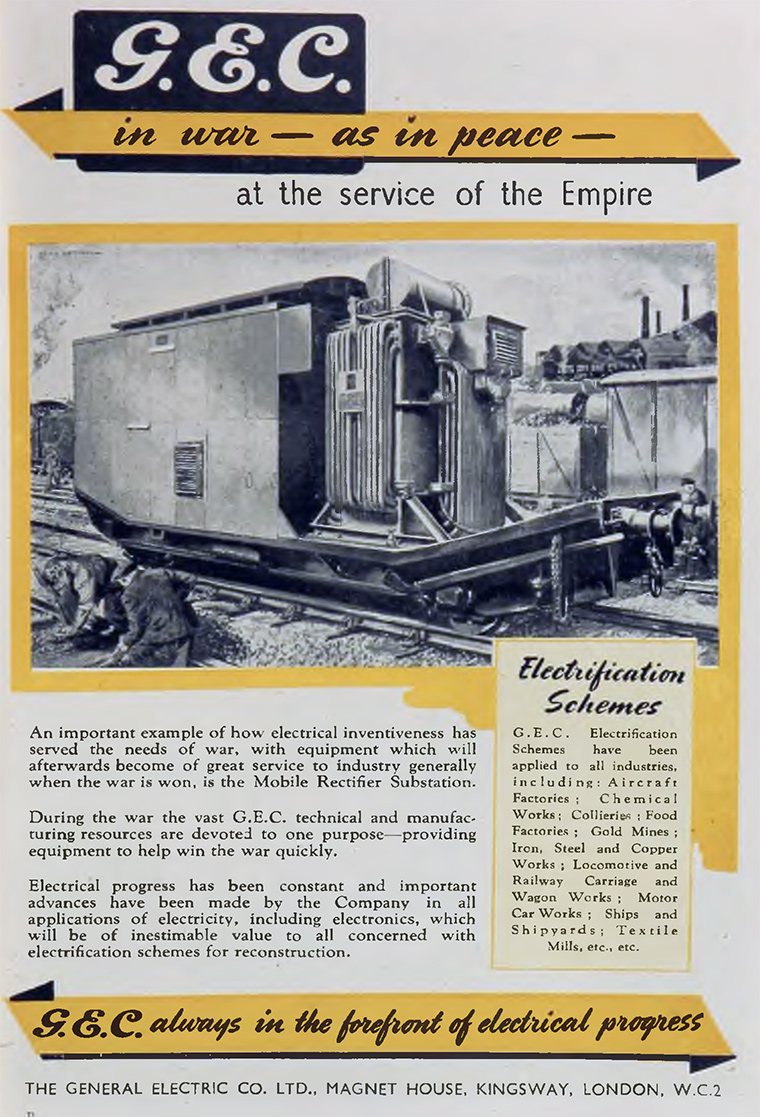 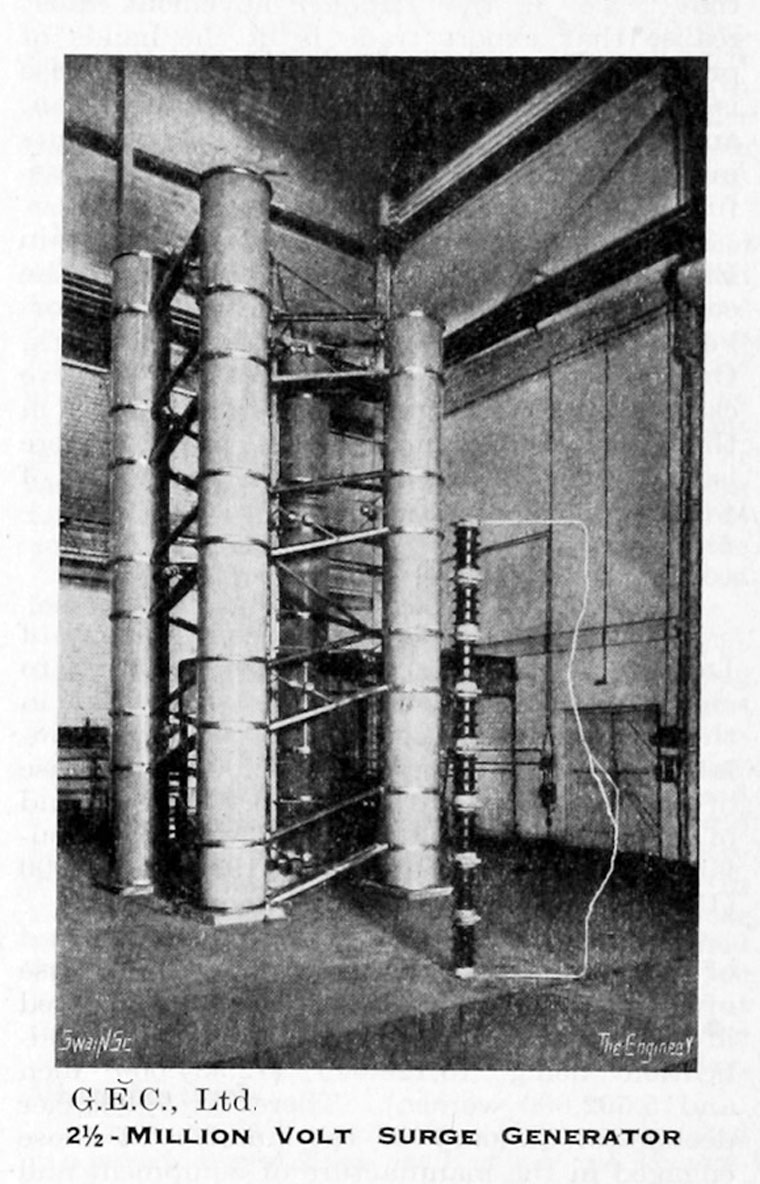 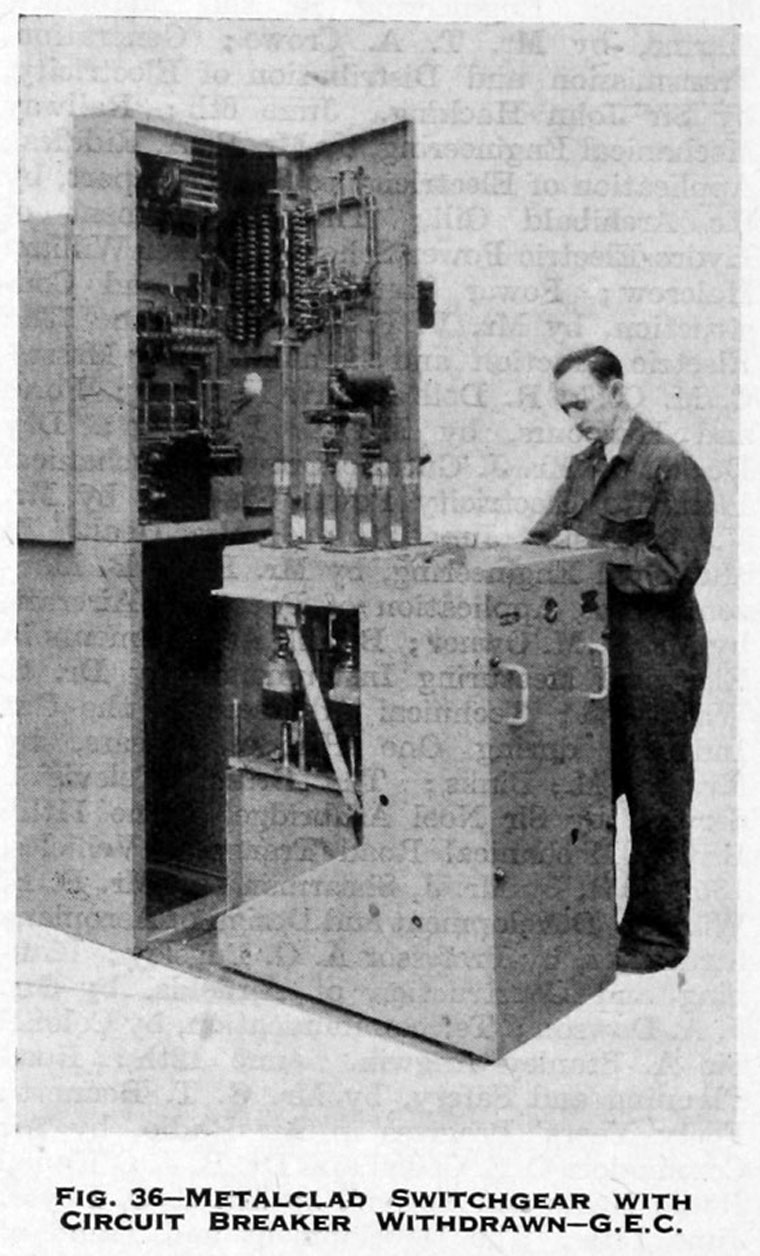 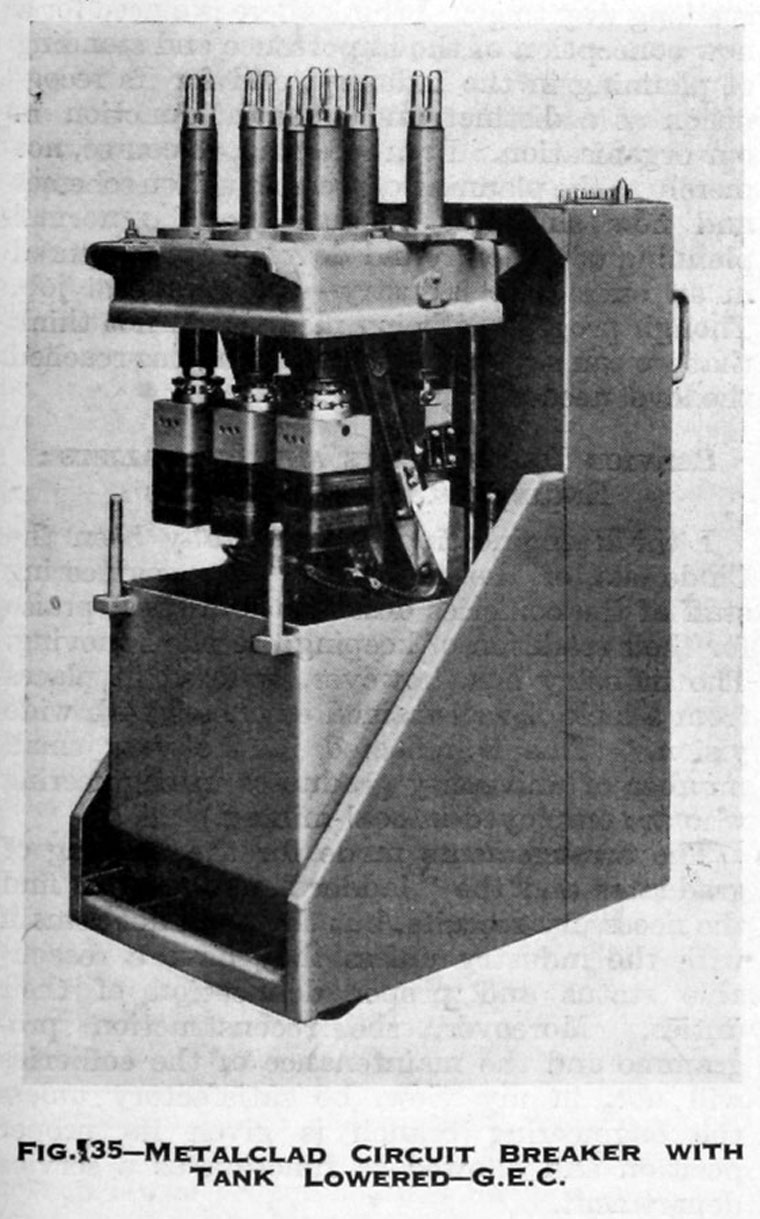 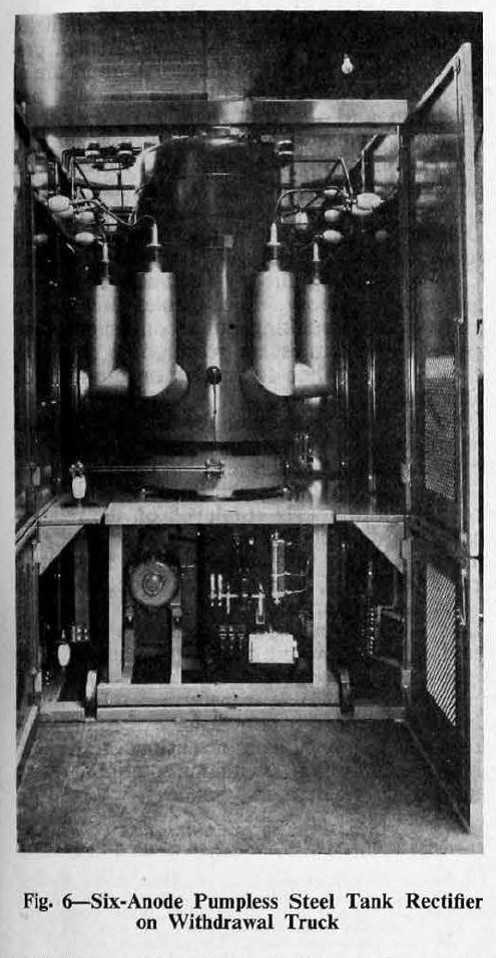 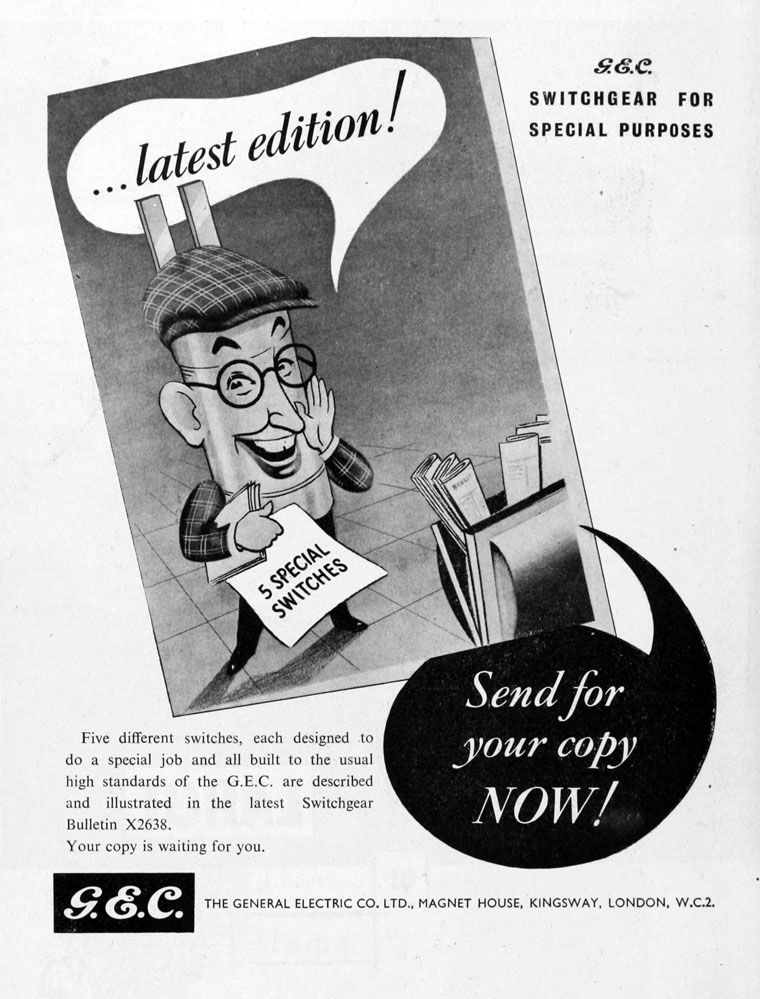 1918 GEC acquired the ordinary shares in Chamberlain and Hookham, meter manufacturers, and the turbine works of Fraser and Chalmers[2].

Post-war purchase of some small companies, such as Fraser-Chalmers Turbine Co, enabled GEC to attack the markets for heavy plant at very low prices.

1930 Development of high voltage switchgear and higher rated transformers for the National Grid. Contracts for the Manchester-Altrincham electrification and other railway projects; orders for ships with electrified propulsion[3].

1930 Turbo-electric propulsion plant ordered for installation in a Furness, Withy and Co ship for the New York-Bermuda service, to be constructed by Vickers-Armstrong at their Naval Yard at Walker. Comprised two high-pressure turbine-alternator units and four propulsion motors, with a designed service output of 18,700 SHP and a maximum output of 20,000 SHP. Turbines to be built at the Fraser and Chalmers Works, Erith, and the alternators and motors at the GEC Witton works.[4]

Bushing Co was a joint venture with Reyrolles

1955 One of four industrial groups formed to exploit the information being made available by UKAEA on design of nuclear power "furnaces" - GEC and Simon-CarvesLtd[6].

1956 GEC-Simon Carves Atomic Energy Group received the order for one of 3 nuclear power stations (at Hunterston) ordered by the Central Electricity Authority. GEC was to be main contractor[7].

1959 After discussions between GEC-Simon-Carves Ltd-Atomic Power Group and Atomic Power Constructions Ltd, the 2 groups agreed to collaborate on the design and construction of nuclear power stations. The two groups would submit joint tenders for the Dungeness power station[8].

1965[9]. As a response to the CEGB's policy of restricting orders for turbine-generators to just two designs (when there were 4 manufacturers), C. A. Parsons and Co bought the turbine and generator businesses of GEC[10]. After a time, the turbine factory at Erith and the generator factory at Witton were closed and production was transferred to Newcastle.

1967 GEC acquired Associated Electrical Industries (AEI). The GEC Switchgear business brought together the corresponding businesses from the 2 companies; GEC Switchgear and AEI: Switchgear were rapidly integrated. The combined transformer business would be concentrated at AEI's Wythenshawe factory. AEI Turbine Generators had won 2 large orders from USA, one involving gas turbines that would be built at Trafford Park; there were also orders from UK and marine orders (in the late 1960s AEI had re-entered the market for geared steam turbine propulsion systems for merchant ships). AEI Large Electrical Machines had suffered from a lack of orders[11]

1968 GEC merged with the English Electric Co. This merger would give "The General Electric and English Electric Companies Limited" almost exactly half of the turbo-generator business. On 6th September the two companies issued a joint statement announcing that ‘a total merger should be effected between them ... under the chairmanship of Lord Nelson with Arnold Weinstock as managing director’.

GEC had 9 other product divisions including 6 foundries

1975 GEC Power Engineering Ltd was one of 5 main UK subsidiaries which itself had subsidiaries[14]:

1988 Acquired Long and Crawford, which had about half of the British market for secondary distribution switchgear, from Cope Allman [15].

1989 GEC Alsthom was formed as a 50/50 joint venture by the merger of the power and transport divisions of Compagnie Générale d'Electricité (CGE) and GEC. From CGE's point of views, France’s market was not sufficient by itself so the merger would enable GEC Alsthom to address the whole of Europe. From GEC's point of view it provided GEC's power division with access to large gas turbine technology (which it had previously been licensing from GE of the U.S.A. and which was increasingly demanded by the privatised electricity companies in the UK and elsewhere).

1989 Virtually all of the power systems activities, which included power generation, transmission and distribution, transportation and automation and control (excluding weighing equipment) were included in the joint venture with Alsthom.[16]

Note: Many power stations contained turbine-generators from a variety of makers. Only GEC sets listed below.

Note: A number of turbine-alternators designed by GEC and manufactured largely at Erith and Witton in the late 1960s were badged as 'Parsons', being made after the takeover of the turbine-generator business by C. A. Parsons and Co. These included four 350 MW TAs for Tilbury 'B'[17], four 500 MW TAs at Kingsnorth, four 500 MW TAs at Didcot, and two 660 MW TAs at Dungeness 'B' were badged as Parsons. Article on the design of the GEC 500 MW turbines here.

Examples of Generators for Hydro-Electric Plant