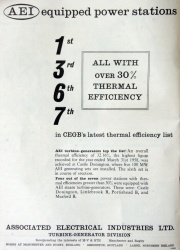 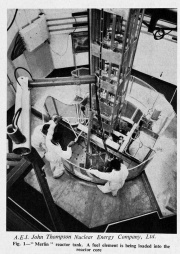 1959. Merlin Reactor and its experimental arrangements. 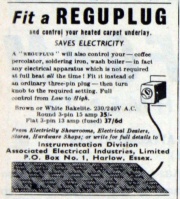 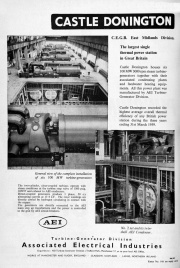 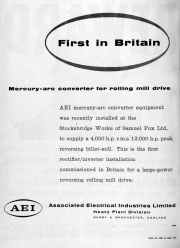 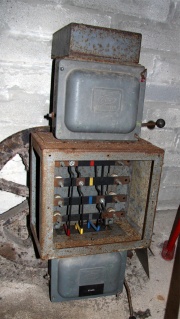 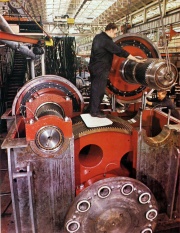 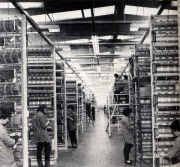 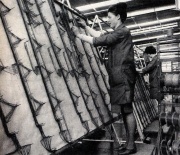 1966. Wiring harnesses for telephone exchange racks in course of production at Kirkcaldy. 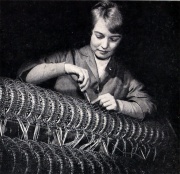 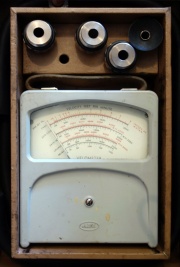 AEI Velometer - appears to be used to measure air-flow.

1926 Gerard Swope, president of General Electric (U.S.A), proposed that BTH, Westinghouse, GEC and the English Electric Co should amalgamate but Hugo Hirst of GEC was not interested in Swope’s scheme.

1928 Formation of Associated Electrical Industries (AEI) [1] as a result of the merger of Metropolitan-Vickers and its rival British Thomson-Houston, a company of similar size and product lineup. Also included in the new group were Edison Swan Electric Co (Ediswan) and Ferguson Pailin of Openshaw, Manchester.

1928 Associated Electrical Industries (AEI) was established[2] as a result of the merger of Metropolitan-Vickers and its rival British Thomson-Houston (BTH), a company of similar size and product lineup. Howard C. Levis (chairman of BTH) became chairman of the new company. Combined, the 2 companies would be one of the few groups able to compete with Marconi's Wireless Telegraph Co or the English Electric Co on an equal footing.

The new group was handicapped by poor communication and intense rivalry between Metrovick and BTH, which remained as separately quoted companies and often worked at cross purposes to each other. AEI was never able to exert effective control over its two competing subsidiaries. Ediswan took on valve production whilst Metrovick ceased valve production; BTH took on radio set production and continued with special purpose valves for non-domestic purposes [3].

1929 The annual meeting was told that agreement had been reached with the International General Electric Co (USA) which meant that the whole group would be able to exchange patents and manufacturing information with GE (USA). Also, International General Electric Co. had significant financial interest in AEI, which it held as an investment with no suggestion that it wanted control[4].

1937 Frank Whittle's Power Jets company built the world's first prototype jet engine at the BTH works in Rugby. BTH had a major role in developing it. Development was later moved to the Lutterworth works, which were falling into disuse at the time. BTH's directors seemed sceptical of the design and offered little help.

WW2 BTH expanded north of the River Avon into the Boughton Road site to make magnetos for aircraft engines and other war products.

1940 BTH decided they were not really interested in making jet engines due to their commitment to electrical equipment. Rover was soon selected to make jet engines.

1945 After World War II Oliver Lyttelton took over the chairmanship of AEI, and started a massive expansion.

1947 The Hungarian scientist Dennis Gabor invented holography at the BTH site in Rugby.

The profits of the group surged in the post-war years,

1954-1963 Lord Chandos became chairman of AEI for the second time; he initiated a programme of expansion including raising considerable sums from shareholders.

1955 Four industrial groups formed to exploit the information being made available by UKAEA on design of nuclear power "furnaces" - Industrial Atomic Energy Group involving AEI and John Thompson with electrical generating expertise from Metropolitan-Vickers and BTH. Other groups were English Electric Co and Babcock and Wilcox; C. A. Parsons and Co and Head, Wrightson and Co; GEC and Simon-CarvesLtd [11].

1956 John Thompson Nuclear Energy Company received an order for one of 3 nuclear power stations ordered by the Central Electricity Authority [14].

1957 The massive new £8 million turbine works was opened at Larne as a result of the increase in demand.

1957 or after: BTH won the contract to build the new Buenos Aires power station, valued at £35 million. Rivalries intensified with Metrovick. Lyttelton continued to try to reduce this friction, leading to several unsuccessful reorganizations and slipping profits.

1958 Reorganisation of the group started with the aim of bringing the 3 subsidiary companies into one with the AEI name used throughout[15]; the subsidiaries would cease to be separate trading companies[16]; the 3 operating companies would be:

1959 Acquired Associated Insulation Products and W. T. Henleys Telegraph Works Co, and London Electric Wire Co and Smiths [18] but London Electric was treated as a "supply company" rather than a division[19].

The expanded group entered a period when business was less easy to grow, with all of the electrical engineering industry facing over capacity.

Supremacy of the AEI Brand

In addition there were other specialised subsidiary companies such as AEI-Hotpoint.

This led to a huge falling-off in sales because no-one in the heavy electrical industry was familiar with "AEI"; a massive drop in AEI's stock price followed. Continued attempts to streamline what was two separate management structures continued to fail and by the mid-60's the entire AEI empire was in financial trouble.

1960. An AEI research lab was built at Rugby (building BR57 in the Boughton Road site).

1961 Britain's largest electrical manufacturer covered a wide range of manufacture, design and distribution; AEI had 103,450 employees with works in more than 50 UK towns[24].

1961 New company to be formed to take over the glass manufacture and sales activities of GEC at Lemington and Wembley and AEI Lamp and Lighting Co at Chesterfield, other than Glass Bulbs Ltd.[25]

1963-1967 Construction and commissioning of the £25M radar dish at Chilbolton Observatory.

1964 Charles Wheeler took over as chairman

1964 AEI formed a joint venture with Thorn Electrical Industries to combine their manufacturing and sales activities in lighting products[26].

1966 AEI purchased the remaining 50% of Submarine Cables from BICC.

1966 AEI and EMI formed British Domestic Appliances to bring together their Hotpoint and Morphy-Richards subsidiaries[27].

1967 AEI acquired Hackbridge Holdings Ltd which was involved in transformers[28].

1967 Lancashire Dynamo and Crypto Ltd was acquired by AEI[29].

1968 The AEI Research Laboratory at Harlow was closed with the loss of 100 scientific posts. The process control department at Harlow would be moved to Leicester[31]

1989 GEC Rugby was split into GEC Alsthom and Cegelec Projects.

1998 GEC Alsthom and Cegelec Projects were reunited as Alstom.

The GEC Board lost interest in heavy engineering, and the company was renamed Marconi plc in 1999 (later Marconi Corporation plc).

2007 The firm's clubhouse on Hillmorton Road was pulled down, and its surrounding sports field was used for house building along its south edge.